From Glassmen.org: The Glassmen kicked off the 2006 season in style last weekend as they presented their first annual Glassmen Showcase event--a day to celebrate the 45th Anniversary of the Glassmen and a preview of the corps' upcoming summer season. The Showcase included a master class and performances by Mark Ford, a 45th anniversary VIP celebration and a full two-hour concert featuring the Glassmen. "There's such a family atmosphere here at the Glassmen," said Ford. "The way everyone works together and interacts is truly amazing!" Read more on www.glassmen.org. 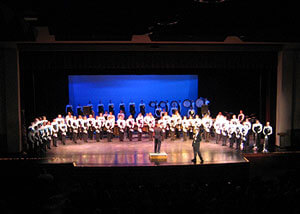 The Glassmen performed music from their field show,