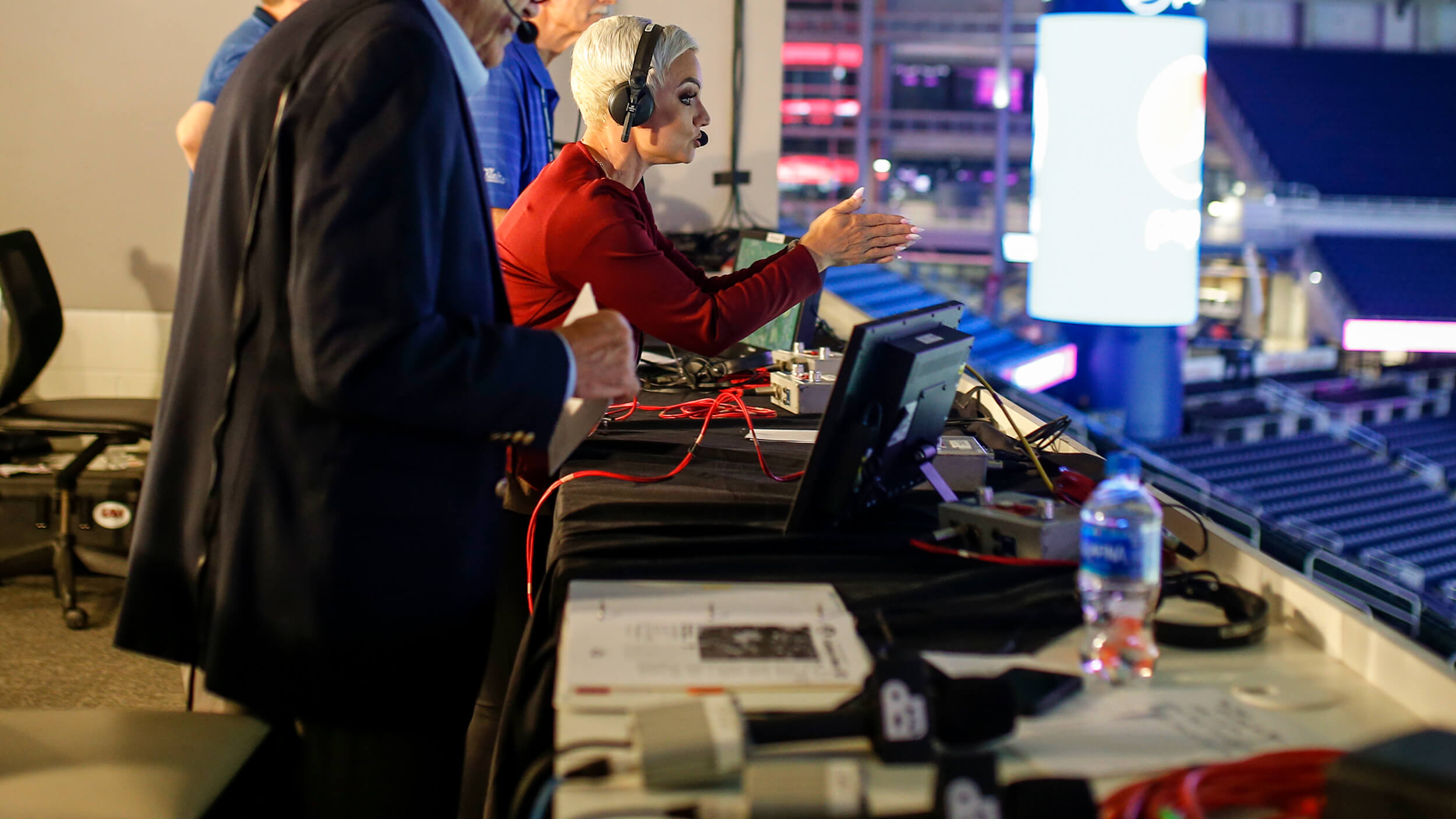 When Lindsey Vento filled a high school color guard director vacancy, she never imagined it would open the door to becoming one of the fastest growing names in Drum Corps International.

Vento — who is in her third year on staff in the drum corps activity and currently serves as the artistic director for The Academy — actually had little contact with marching music prior to her role with her high school’s color guard. And while the trajectory of her drum corps career has quickly escalated, her path from fan to staff member is anything but traditional.

Vento already had opera performance and music education degrees, a dance background, and teaching experience when she stepped into a different side of the marching arts to fill the need—one she never imagined would have such a profound effect on her career.

And while she entered the role apprehensively, she quickly gained an affinity for the dynamic that marching music presented.

“I fell in love with it,” she said. “The surroundings, the competitive side of it, the art form. All of my favorite things could be combined into one activity.”

Through her talents and growing love of the activity, Vento evolved her role from high school band involvement to teaching in Winter Guard International. Before long, she found herself working alongside drum corps professionals, first at Carolina Crown, and then in 2018, in her current design leadership position with The Academy.

Now in her second year with the corps, Vento continues to shine as an example of innovation and capability within the industry. Through devotion to the activity and a drive to succeed, she has continued to establish a presence in drum corps and expand her level of involvement, acting as DCI’s newest on-air talent for theater broadcasts.

While Vento has certainly made her presence felt in the activity, there lingers a hint of wonder at the inception of her journey. In all of her pursuits, her own self-propelled launch into drum corps came as something of a surprise.

“I think when you first start out as a fan, you look at that and it’s so untouchable,” she explained. “What those members were doing was so above my head, so I never really thought forward and envisioned myself there.”

Vento’s ambition and expertise, however, propelled her into an influential role, allowing her to showcase her creativity and build credibility.

In working with The Academy, Vento also found herself in a unique position. Her debut in show design was seemingly unprecedented, as she was stepping into a role where she had seen little female representation.

“Honestly, at that time, I didn’t see a lot of women doing it,” she said. “That just didn't seem like a door that was opened for me to be a part of. I always wanted to. I always loved it, but I never looked down the road thinking I would be here today.”

The jump from an observer to a contributor in such a competitive and talent-driven environment is often daunting, regardless of outside influences. However, Vento’s performance background and dedication to the craft made her a perfect fit for the role and allowed her a platform of visibility.

Her career also came in hand with a network of supportive educators and an opportunity to become the representation she found lacking at the start of her drum corps journey.

“I’m in a really wonderful position that I think people see,” she said. “I think there are younger women out there who will say, ‘Well, if she can do it, she didn’t march or spin in color guard, and look where she is. And she’s a woman.’”

And while Vento began her marching band career by filling a vacancy, she found duality in that fulfillment, adding representation to a role where it was difficult to envision herself. And simply through her involvement, Vento has been carving a path for more women to pursue leadership in the marching arts.

Vento now works alongside other inspiring women in the activity, one of whom is Lisa Tatum, brass caption head at The Academy. Together, the two are able to redesign the visual representation of leadership in drum corps simply by exemplifying their abilities.

“Being around her and being able to teach together is just a strong force,” Vento commented. “I think it’s very inspiring to the Academy members as well, that they’re seeing two strong women set an example and take the reigns. I think that’s good for them to see.”

And for representation in the activity, Vento believes that the corps everywhere are working to actively promote opportunities for anyone with the tenacity and grit to succeed.

“I think the steps that we’re taking right now are opening doors,” she said. “You can tell by the designs coming out and with how many more female staff members are feeling confident and comfortable. So I really do think we’re on the right path. What we’re doing and what people are putting into place are all going in the right direction.”

A combination of curiosity and passion have allowed her projection into the spotlight, and through that rising recognition, Vento remains clear about the purpose behind her influence.

“I want to make sure that people know that we aren’t just getting these positions and roles because we are women,” she said. “I think it’s noticeable because now you see a woman in a role and think ‘Oh that’s awesome,’ but I really think it’s important to understand that we’ve worked for that.

“We’ve asked the right questions and done the work. We come with talent and with skill. I always want to make sure that people know I’m not just the artistic director at The Academy because I’m a woman.”

With an increased representation of women in the marching arts, Vento’s voice adds to the open door of opportunity that she has helped create. She has made a name for herself in the activity, imprinting on young performers everywhere and weaving together a narrative that speaks to her work ethic and drive.

Long-term, her story is one of dedication, perseverance and a desire to positively impact a community. Through the visibility of her position, Lindsey Vento continues to inspire young women to pursue their passions boldly and relentlessly.

“There has been a lack of women empowerment for years in drum corps. But it is coming around and it is quickly picking up steam as we all feel more confident.

“I’m hopeful that I’m inspiring others to take the leap.”