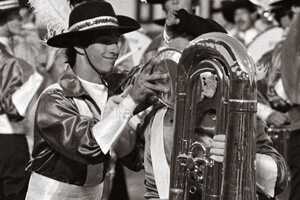 1978 North Star
Pi Day, March 14 … 3/14 … 3.14, is the day set aside by math geeks around the world to celebrate the fabulous number that represents the ratio of the circumference of a circle to its diameter. Also representing the ratio of a 35-millimeter film canister's circumference to its diameter, the day typically features showings of Academy Award-winning director Ang Lee's "Crouching Tiger, Hidden Dragon," starring Heath Ledger and Jake Gyllenhaal in a story of the forbidden love of irrational and transcendental numbers not at the root of any nonzero polynomials having rational coefficients. (Side note: I don't know how I ever managed to write before I learned how to use Wikipedia.) Drum corps fans have our own unique way of celebrating Pi Day, by gathering outside the Indianapolis Artsgarden and eagerly awaiting the rising of smoke above the roof of the Weber Grill franchise that shares a ventilation system with the subterranean DCI headquarters. The appearance of white smoke means we'll be returning to Lucas Oil Stadium for the following year's DCI World Championships, while black smoke means my editor has finally thrown his hands in the air and decided to replace me with a new writer. Either that, or the burgers are done. But there is also an endearing and enduring ritual enjoyed by drum corps fans that cannot make the journey to downtown Indianapolis for Pi Day. By the tens of thousands, they cyber-unite with fellow fans and watch a famed video clip of the now defunct North Shore Massachusetts-based corps North Star at the 1978 World Championship Finals in Denver. In this clip, you will see contra player Joey "Moose" Interbartolo get hit in the face by a pie launched by percussionist Bruce Wallas. And because we at DCI appreciate conceptual high art, as evidenced by our recent "Harlem Shake – Drum Corps Style" video, you will see Joey get hit in the face not once, but multiple times during Stevie Wonder's "Sir Duke," the anthem Wonder wrote to commemorate the Hawaiian musical influence of famed surfer and Olympic swimmer Duke Kahanamoku. I believe you'll agree that we can refer to this singular act of loony silliness internationally as the most glorious 3.14 seconds in the history of drum corps. Enjoy your (3.14) day! Read more about 1978 North Star.