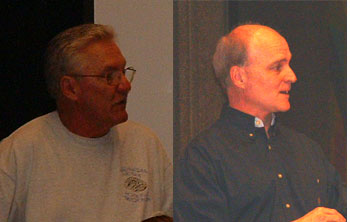 David Kampschroer (left) and John Phillips.
This evening at the board of directors meeting, DCI Hall of Fame director David Kampschroer explained how the "dramatic" changes to the Hall of Fame nomination process haved made the procedure run more smoothly. He also mentioned that the Hall of Fame section of DCI.org has undergone several changes recently, including the addition of biographical information for most members, along with a photo. DCI judge administrator John Phillips then presented a task force judge's administrator report. "The state of adjudication has continued to improve over the last few years, due to a concerted effort on the part of DCI task force and their educational programs," Phillips said. "Lots of new judges have entered the activity, and bring a fresh face to the evaluation of the corps," Phillips added.