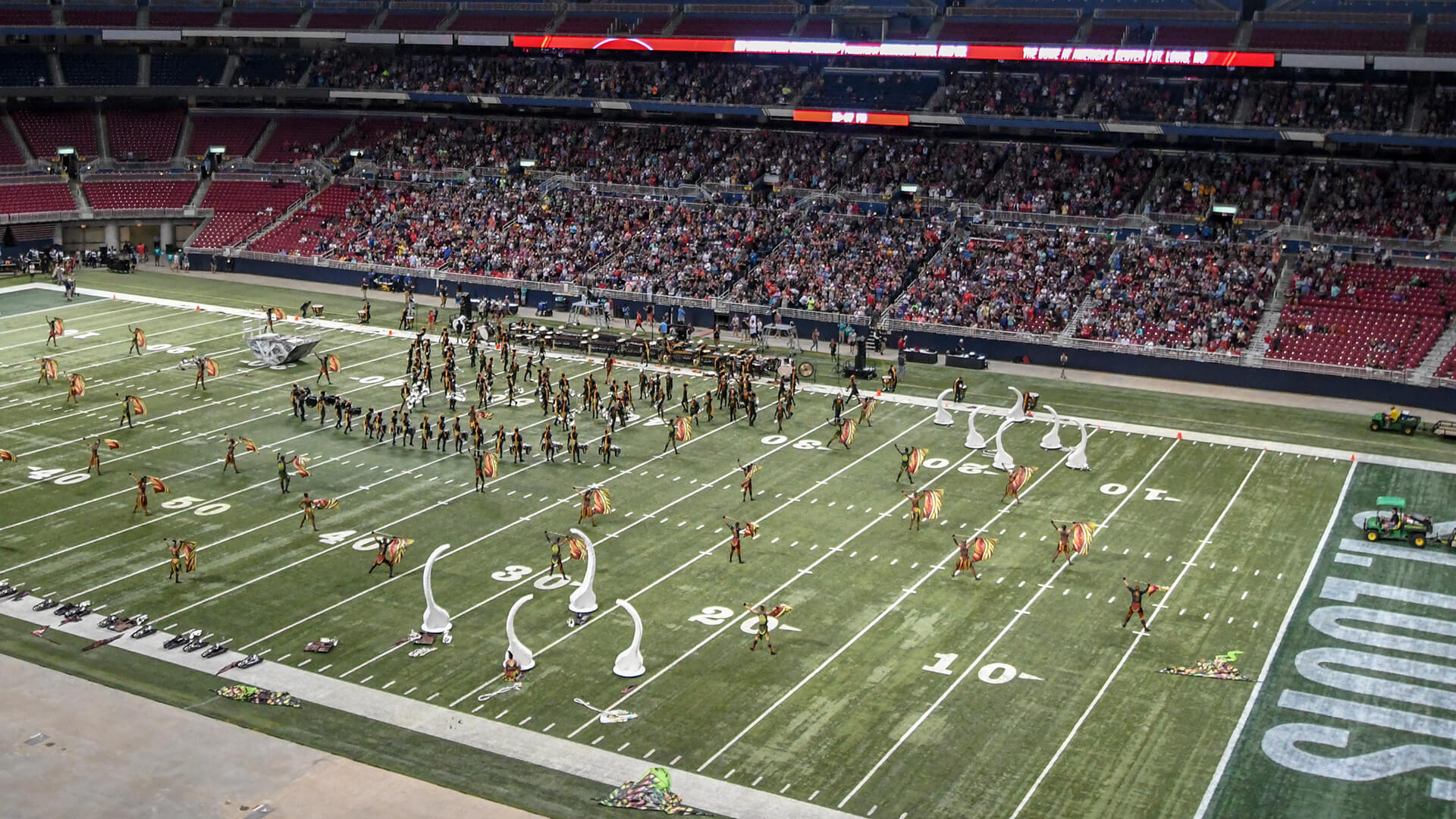 With the defending World Champion Blue Devils on top by just 0.225 points over second-place Bluecoats, St. Louis’ marquee event set the stage for an exciting several weeks ahead.

With Blue Devils’ slim defeat of Bluecoats, no undefeated World Class corps remain on the 2018 DCI Tour; the Concord corps’ final score was strengthened by a four tenths of a point win in total visual, as well as top marks in color guard.

“It was absolutely exhilarating being in a dome for the first time this season and feeling the energy,” Blue Devils drum major Everett Kim said. “We were all ready to go full of energy all the way through the end of the show. This was a good show, and we all feel really good about it.” 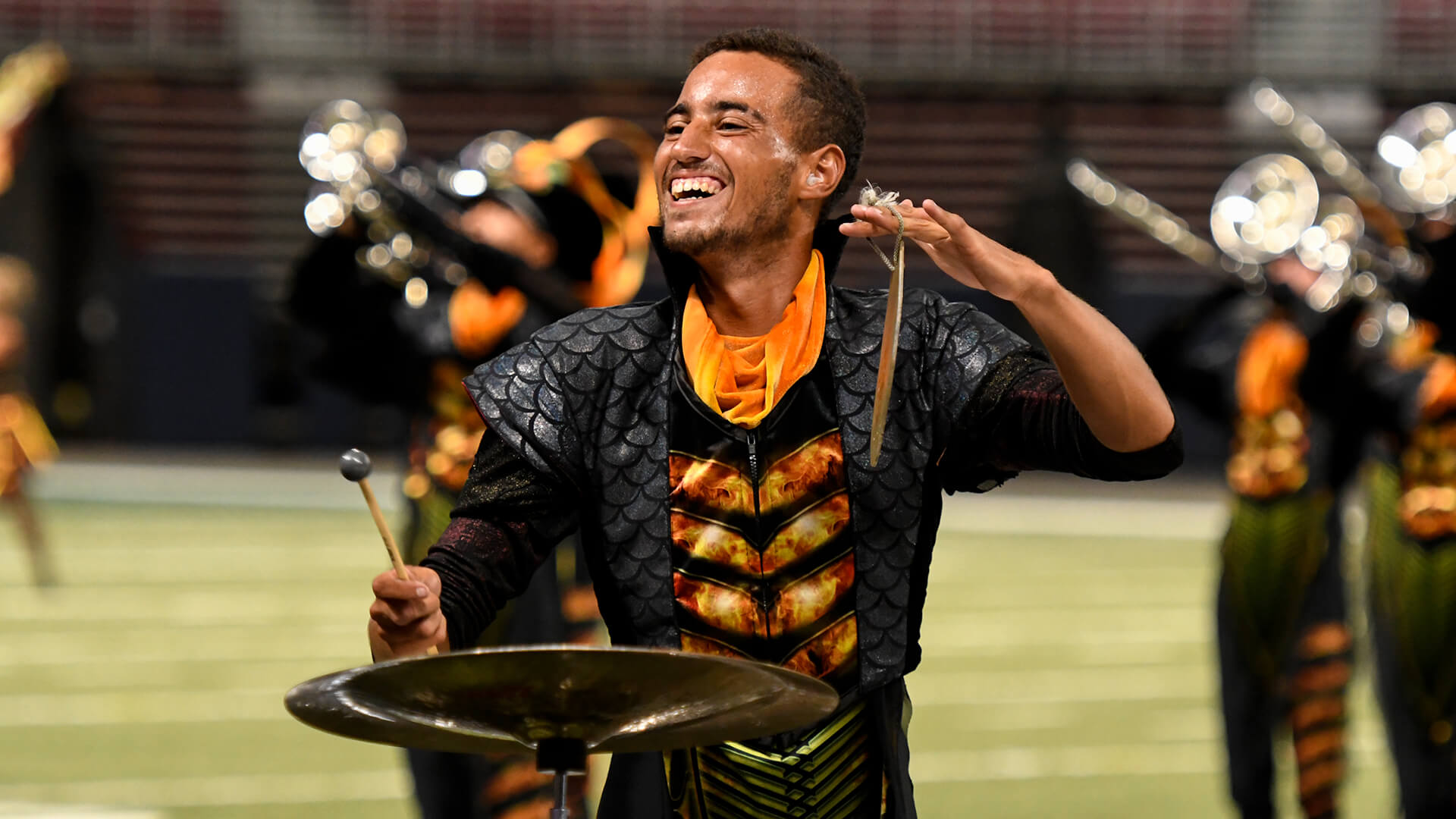 The results between Carolina Crown, The Cavaliers and Boston Crusaders, look considerably different than the last time all three were together, just four weeks ago at the DCI Tour Premiere in Detroit.

For Crown, its impressive numbers in music captions — specifically, top marks in percussion — kept it above the pack. Standout visual scores, however, for The Cavaliers and Boston Crusaders — whose color guards finished second and third, respectively — kept things close from third through fifth.

“They’re really excited to throw down with other groups from across the country right now, meeting up with the Blue Devils and all the other drum corps,” Carolina Crown drum major Elayna Youngson said. “It just brings a whole new level to our performance.”

As for Boston Crusaders, the corps’ 2.775-point distance from the Blue Devils is its closest ever, another achievement in its successful start to 2018.

“The first thing a staff person came up and said, ‘That was an incredible run,’” Boston drum major Nick Winckel said. “From the field level, it felt the exact same to what he expressed to me. I’m feeling really good right now.” 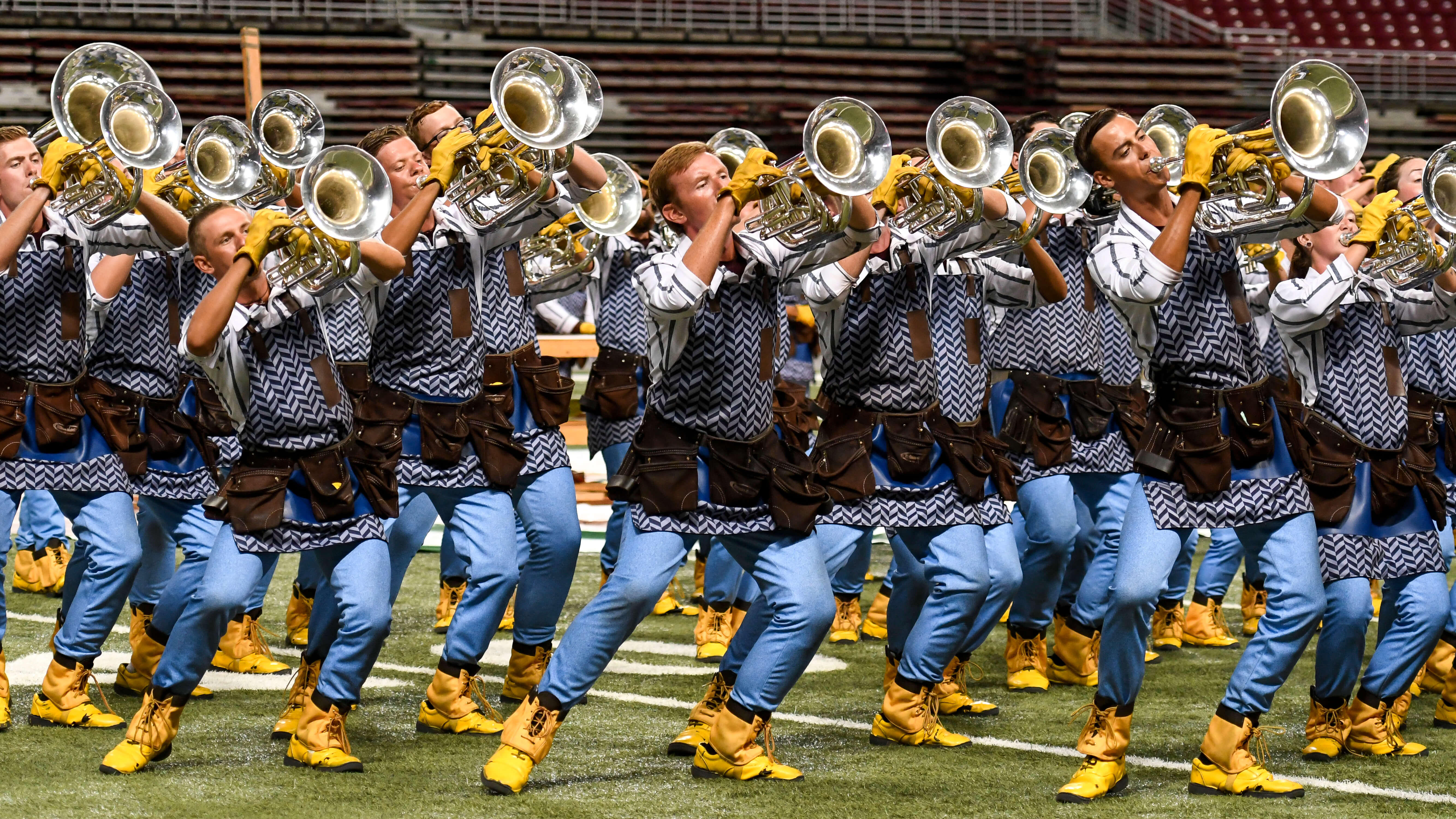 It’s been back-and-forth recently between the Blue Stars and Phantom Regiment, with the Wisconsin corps jumping ahead by a small gap, just 0.162.

Driven by recent additions to its 2018 production “This New World”  — including a visual nod to its history, an iconic leg-kick implemented into its final movement — Regiment kept a bit of distance from the Mandarins and Crossmen.

“We got to add in an old school kick-out which is a really cool thing for us,” Regiment trumpet section leader Bradley Faulkinberry said. “It’s really important for us to have a good show now so that we can build on it and see what we need to improve by the end of the season.”

This summer, Mandarins made its way to the midwest earlier than it has in years past, giving it an opportunity to face a handful of the corps in this bracket. Since falling by nearly a point on Tuesday, the Blue Stars have opened up a lead on the Sacramento corps, while also gaining a good amount of breathing room over the Crossmen.

While Blue Stars’ music numbers pushed them into eighth place, Mandarins’ outputs in the visual caption, including a sixth-place color guard, kept them close behind.

“I’ve very much enjoyed seeing new corps,” Mandarins drum major Kiri Gouldner said. “This is the first time we’ve done this tour in a very long time, and just seeing something different and being able to perform alongside fantastic groups has been an awesome opportunity.” 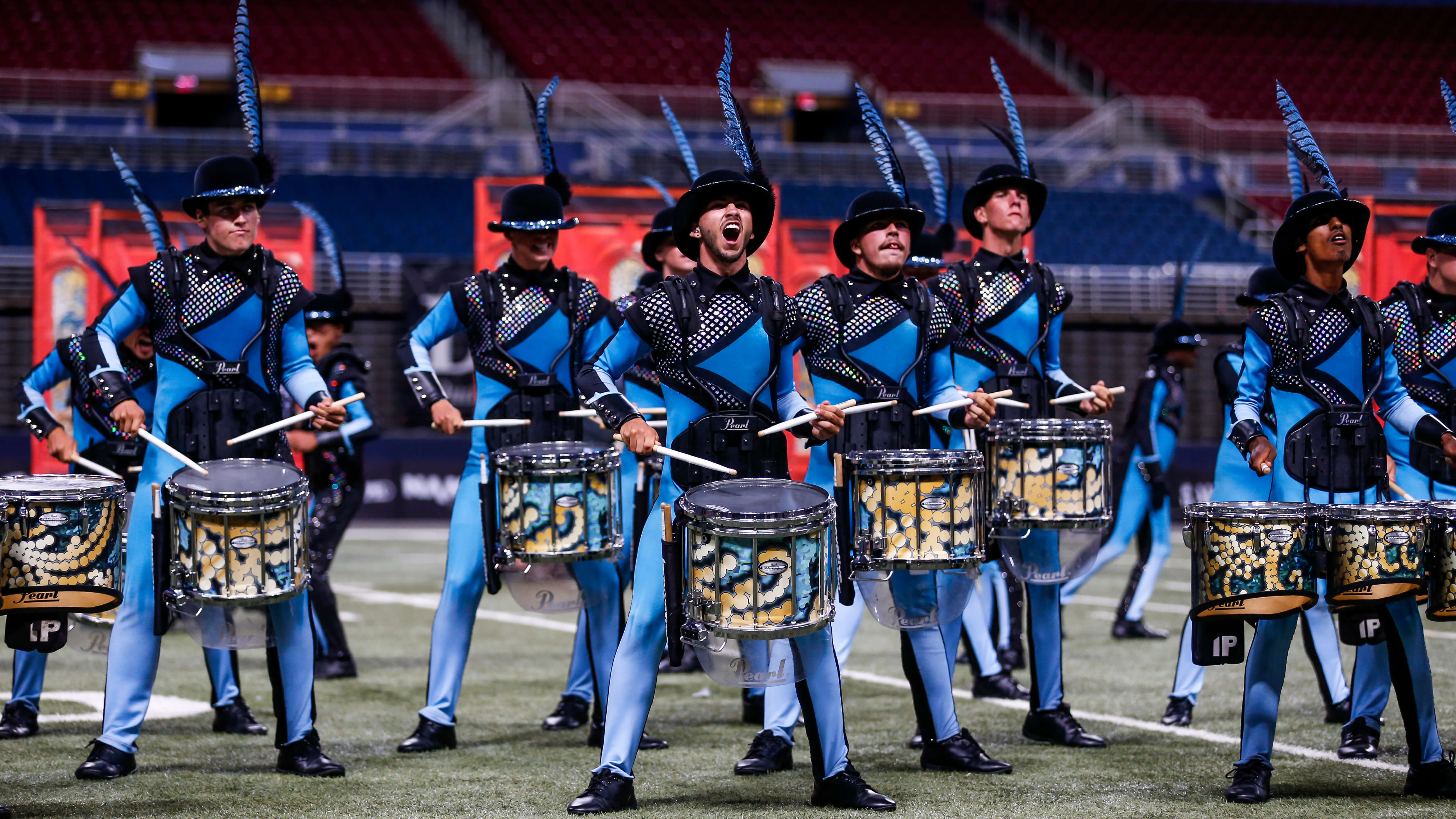 After defeating the Colts by 1.1 points on Saturday in DeKalb, Illinois, the Madison Scouts held onto their lead by a thread Sunday, with just 0.025 between them and the Iowa corps. While the Scouts trailed in total visual and total music, they kept an advantage over the Colts thanks to an edge in general effect.

In its first meeting with Colts and Madison Scouts, Spirit of Atlanta continued its hot start with a sizable lead over both. Until Sunday, Spirit hadn’t finished ahead of the Colts since 2015, nor Madison since 2009.

“This regional hypes us up, the whole corps gets super excited about everything we’re doing,” Spirit drum major Aidan Lerner said. “In general the corps is just amped about the entire season from start to end.” 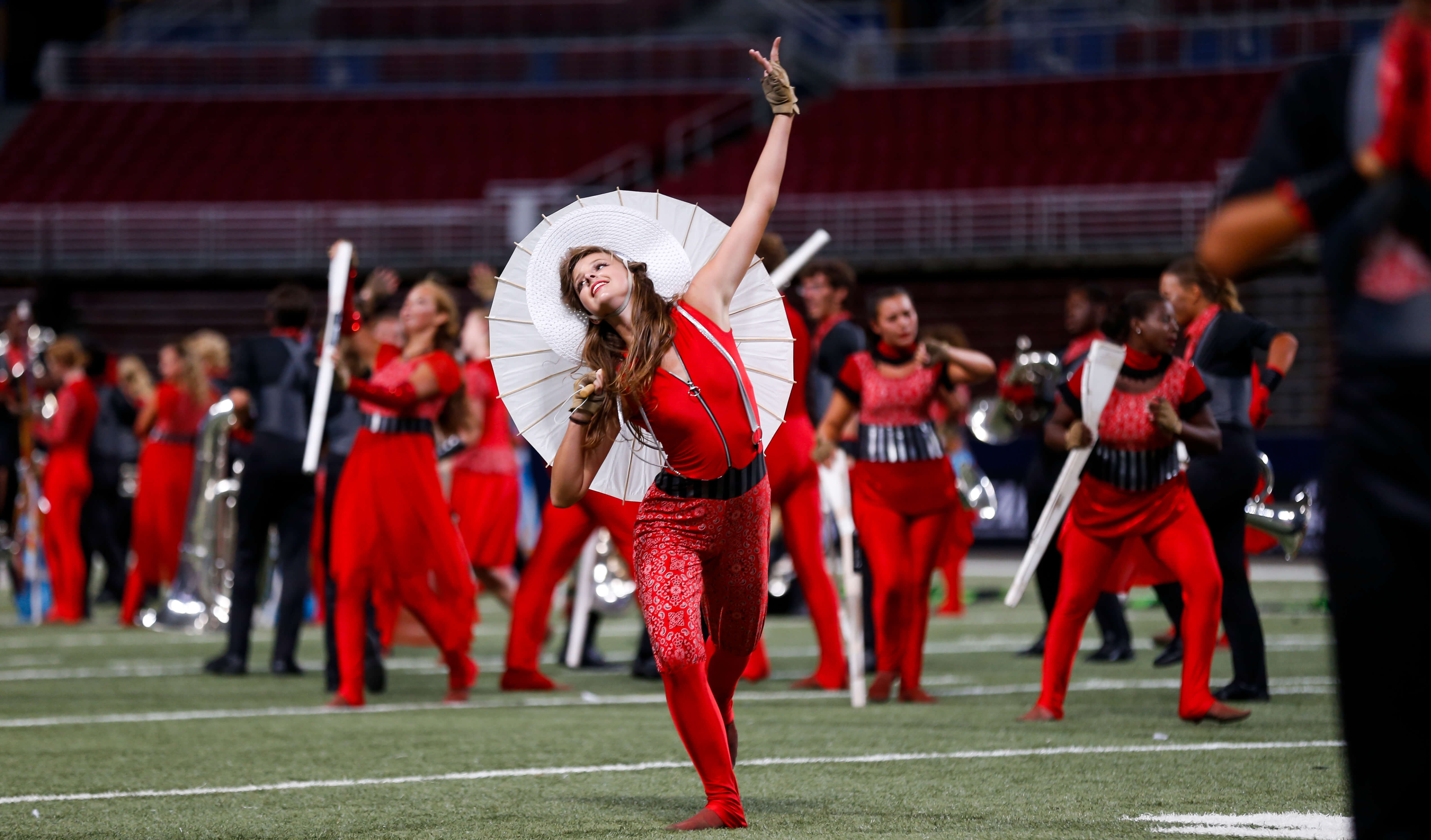 In its first regional competition as a World Class corps, Music City shined, with a lead just under a point over Genesis in the two corps’ first meeting. The Nashville corps found its strength in general effect, where it edged Genesis by 0.65 points.

“We're really excited to perform here in the big dome,” Music City drum major Jeremiah Wooten said. “It's our first chance to be in that environment, see how the show is going to look and sound, and how it will translate to a press box that's a lot further away.” 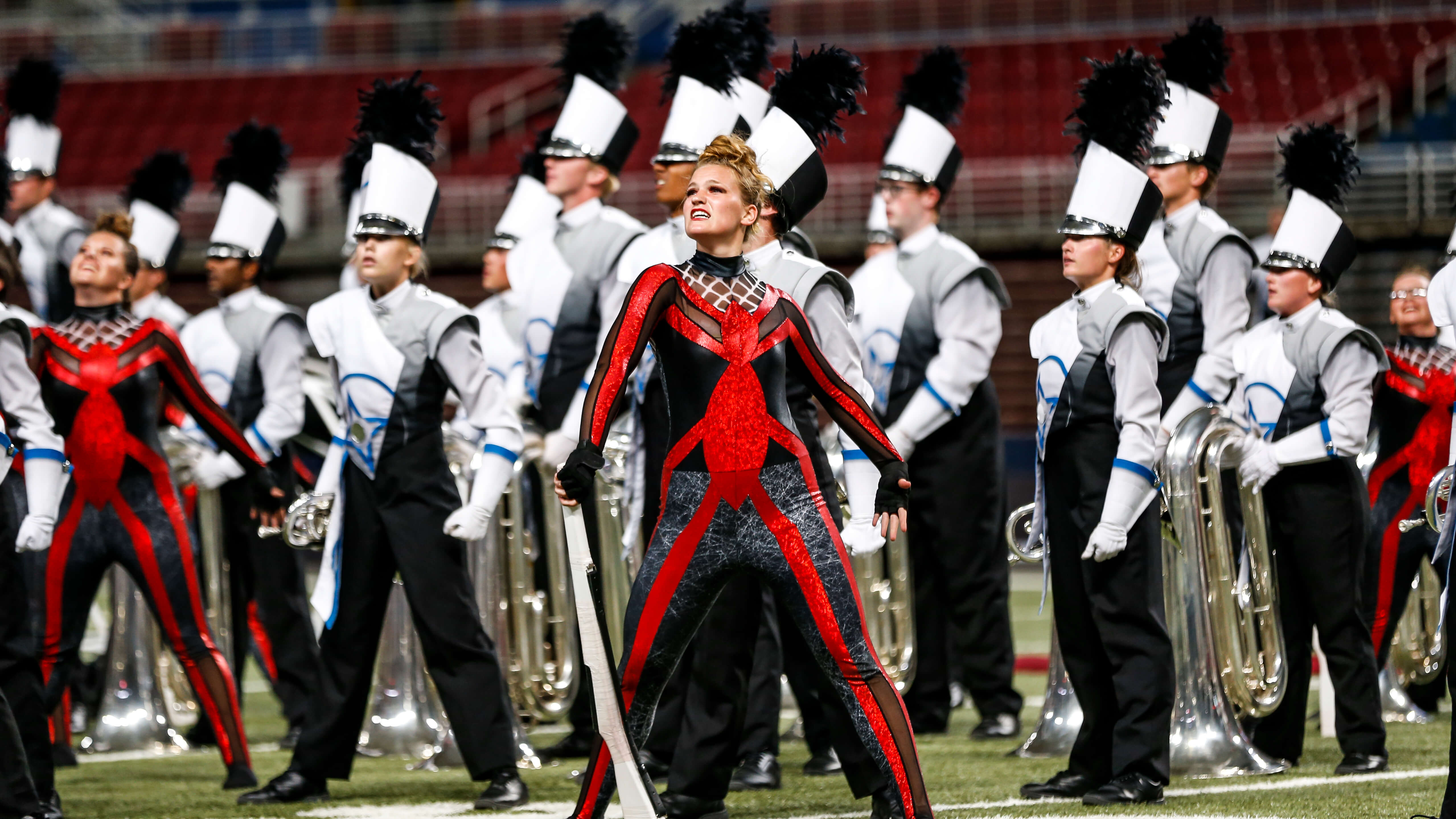 Legends’ strong lead in general effect led to top marks in the Open Class division. Across the board among all three Open Class corps in St. Louis, Legends won all captions except visual proficiency, which went to Colt Cadets, and percussion, which went to Shadow.

The Kalamazoo, Michigan corps’ performance was its first and last in a regional atmosphere before this August’s DCI World Championships, making it a valuable experience with Lucas Oil Stadium waiting at the end of the road.

“We’re feeling pretty great,” Legends drum major Emily Thomas said. “It feels really good to be able to perform in a venue like this with all of these other incredible performers around us and being able to share this experience with so many other people I think that’s what really makes this activity special.”

With the first regional event of the 2018 DCI Summer Tour in the books, World Class corps will begin making their way toward Texas for several events including the DCI Southwestern Championship presented by Lone Star Percussion, July 21 in San Antonio.