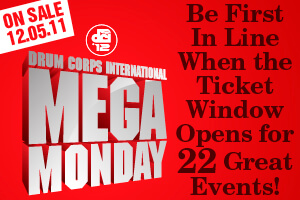 For those in cooler climates who may just be experiencing the first snows of the impending winter, nothing will warm you up better than looking ahead to the heat of the summer drum corps season.

If you'd like to get your hands on tickets to some of Drum Corps International's most popular events from June through August, mark your calendars for MEGA MONDAY coming up on December 5!

On that very special day, we'll be putting tickets on sale to a record number of shows for the 2012 Drum Corps International Tour. This will be your early opportunity grab some of the best seats in the house for some of the most popular tour stops of the year.

Before then, be sure to sign up for DCI.org's "Box Office Alerts" so you can be in the know when these and other 2012 event tickets will go on sale.

The following tickets will be available through the Drum Corps International Box Office or Ticketmaster on MEGA MONDAY, Dec. 5.