By Kristen Richard I marched with Revolution and this is near the end of our show: "The Push." It is the part of the show that is supposed to hit people the hardest, filled with chords that make their hearts jump, followed by the fast action of the ending segment that draws the crowd out of their seats. It's the part where you finally notice the people in the stands yelling for you and for one moment, it seems like a dream. Your heart races and you wait for the "Dut! Dut! Dut! Dut!" that propels you into another emotional roller coaster of the ending segment. You're tired and you're hot. Your sweat drips into your eyes, stinging them for a moment, but you hardly notice because you are so focused on what comes next. 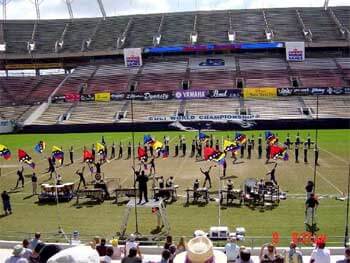 The 'push' sequence of Revolution's 2003 show.
It symbolizes the hard work, pain, sweat, blood and tears that come with every rehearsal and the joy that follows every performance. It's challenging -- the short nights sleeping on buses, waking up in a different state every morning, emotional drainage, 14-hour rehearsal days, and sleep deprivation can seem overwhelming. As you march out of the tunnel and huddle up with these people that you lived with for 24 hours a day, seven days a week, for 10 weeks, it does get emotional. It's the end of tour. You will probably never see some of these faces again. For some it was their last show ever. In the words of my friend Art Cano, a 2003 age-out, "I loved every second of it. I was so focused on my show, and then I saw these faces that I know I won't see for a long time." He continued with tears in his eyes, "I want them to know that I've worked really hard for each and every one of them. I'm willing to die for them and do anything for them." "Drum Corps: For those who know, no explanation needed. For those who don't know, no explanation possible." That's what I was always told when I first learned about the activity. After a summer with Revolution, I've found it's true. I find myself mixed with so many emotions and fumbling for the right words when I try to explain what it's all about. Unless you've gone through the pain, agony, suffering, fun, and glory of it all, you will never know. It makes you have these indescribable feelings -- the kind that make you want to cry and jump up and down with joy at the same time. I won't ever forget the friends I made; we are like a second family to each other, and for some, it's the only family they have. I'm proud to have been a part of Revolution.