From a Mystikal press release: Mystikal kicked off its April rehearsal camp weekend with a pit stop at the Edwards Cinema in Camarillo to watch the DCI Classic Countdown before continuing to Port Hueneme for the weekend. The local newspaper was present to interview the corps' director and a few of the members. This was a great way to start our spring season by watching old drum corps and new corps. The crowd favorite of the night was Santa Clara Vanguard 1999. 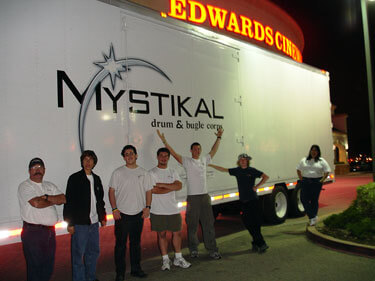 Mystikal's camp was a great success! The corps was able to get three minutes of drill and music on the field. By Sunday, the brass and percussion were on fire. The corps' director (Rob Lowery) stated that the corps is sounding much better than the ending of last season. "I give the credit to the new brass staff (Rudy Averalos and Brad Davis) and the percussion members which are at a higher playing level." Other changes in the staff, is the color guard (Martha Villar, Josh DeGuzman and Chris Ceo). This color guard is working so well together that the guard members are learning quickly and staff's writing is VERY musical this year that will be appreciated by the judges and fans. The guard will be adding great value to the visual program or the production. The corps' director stated, "I can't be any happier with the 2006 staff. These guys work well together, have the same philosophy of drums corps, and they all want to take the corps to the next level through educating the members." After the long weekend by the Pacific Ocean, the corps selected the 2006 conductor. Derek Kessler was announced on Sunday afternoon to the entire corps as being the successful candidate. Derek comes to the corps with a very strong musical background, theatre performance and strong leadership skills. Derek comes to the corps from Iowa and currently resides in Corona, Calif. where he is attending college. www.mystikal-corps.org