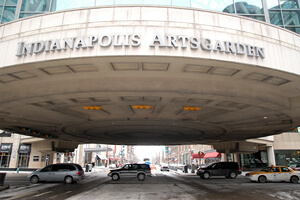 The annual DCI winter business meetings
will take place Jan. 25-27 in Indianapolis.
More than 100 World and Open Class directors, drum majors, presenters and other representatives of the drum corps activity, will descend upon Downtown Indianapolis Jan. 25-27 for Drum Corps International's annual winter business meetings. One of the biggest gatherings of the drum corps community during the off-season, meetings and workshop sessions are designed to allow the DCI Board of Directors and member corps the opportunity to conduct general business as they prepare and plan for the upcoming summer season. The following are highlights from the meeting agendas.

Voting Membership Meeting Meetings will kick off on Friday afternoon. Any business items brought up over the weekend requiring approval from DCI's membership will be determined by a vote of representatives of the 22 World Class member corps. By Drum Corps International bylaws, the Glassmen, although indicating that that they will not participate in the 2013 DCI Summer Tour, are still entitled to a vote at this meeting. DCI's newest World Class corps, Oregon Crusaders, will be in attendance this weekend but will not be granted a vote until approved for full membership in the future. Open Class Business Meeting Also kicking off on Friday afternoon, Open Class corps directors will begin covering a variety of topics related to their corps. Operating policies, participation agreements, and the 2013 Open Class summer tour schedule and World Championships are all agenda items. Annual elections for the Open Class Advisory Committee will take place before the dinner break. For the first time in DCI history, all Open and World Class representatives will come together beginning Friday evening and through the rest of the weekend in combined sessions. Drum Major Leadership Summit For the fourth consecutive year, drum majors of both World and Open Class corps have been invited to DCI's annual meeting for a leadership summit. 27 drum majors representing 22 corps are expected to be in attendance. Over the three-day seminar, drum majors will participate in a series of interactive activities and discussions that are designed to hone leadership, problem solving and time management skills, all while helping them build a support network among their peers that transcends competition on the DCI Summer Tour. Leading a number of the sessions at this year's seminar, which runs from Friday evening through Sunday morning, will be motivational speaker Fran Kick, DCI Hall of Fame members Joe Marrella and Gene Monterastelli, and a cadre of former drum majors from a number of DCI corps. Drum majors are invited to Indianapolis at no cost to the student. "Through fundraising, we hope to keep the burden of cost away from these amazing corps member-leaders," DCI Executive Director Dan Acheson said. "As a result, we continue to ask for the drum corps community to embrace the opportunity to support these deserving young people with a donation to the special fund created exclusively for this purpose." DCI has been collecting donations to support the drum major leadership summit through the Arts Council of Indianapolis' Power2Give program. Learn more and donate today at Power2Give.org

Rules and Systems Report DCI Artistic Director Michael Cesario and Judge Administrator John Phillips will present to the corps on Saturday morning discussing the first-year results of DCI's new judging system which was implemented during the 2012 Drum Corps International Tour. No rules change proposals are on table for discussion at this year's winter meetings, however, Cesario and Phillips will present a plan to corps directors for a biennial process beginning in 2014. DrumLine Battle and SoundSport® Presentation DCI Director of Business Development John DeNovi and Director of Marketing Bob Jacobs will present plans for the ongoing development of DCI's recently announced far-reaching performance opportunities SoundSport and DrumLine Battle. Read more about the launch of SoundSport and DrumLine Battle. Board of Directors Elections Elections for the DCI Board of Directors, which consists of five corps-affiliated and three unaffiliated positions, will take place late Saturday afternoon. Two board seats expire this year including those currently held by Tom Spataro (Boston Crusaders) and Michigan attorney Mark Stasa. Both individuals are eligible for reelection. Opening a third seat, Greg Orwoll (Colts) will step down from his position on the board, though he will remain active as part of DCI's Finance Committee. DCI board members serve staggered three-year terms.