Members of the 2004 class of the DCI Hall of Fame were announced back in April, were recognized during World Championships and will be formally inducted at a ceremony this coming January. We'll be profiling each new Hall of Fame inductee over the next few days. 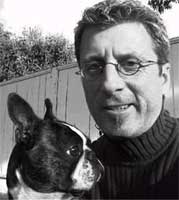 Scott Chandler
Scott Chandler began his drum corps career marching with the Madison Scouts' guard in the late 1970s. After aging out, he embarked on a teaching career that found him instructing the Bridgemen, Spirit of Atlanta, the Cadets and the Blue Devils. Chandler's love of teaching is what has kept him motivated throughout his career. "The idea that we are teaching future choreographers and instructors is what continues the performance process and the continuation of drum corps and color guard," said Chandler. "As a designer and choreographer I hope that no matter how brief a moment, the work in that moment provides some enjoyment for the viewers and gives them the opportunity to enjoy the hard work of the performer. We're all connected, no matter how anxious some might be to criticize different parts of the puzzle. The connection of the choreography to the performer to the viewer is an ever-present emotional experience." Chandler points to Stanley Knaub and Tam Easterwood for their contributions to the drum corps activity. "I'm continuing the work that they introduced. Their contributions motivate me on a daily basis," he said. "For more than 20 years, Scott has grown within drum corps and has contributed to the enormous appeal of the programs seen on the field. Certainly, drum corps has changed and has had a great deal of success recently. At the core of any success we find the participants both in the staffs and performers. The joyous way in which Scott's guards perform is part of the overall success. The creativity of his work has brought added enthusiasm to our stages," said George Oliviero, a DCI Hall of Famer who nominated Chandler. Since 1990 Chandler has served as program coordinator and choreographer for the Blue Devils. He is an amateur pianist and also has recently ventured into the dog show ring with his 4-year-old male Boston Terrier, Bogie. Visit Scott Chandler's page in the DCI Hall of Fame