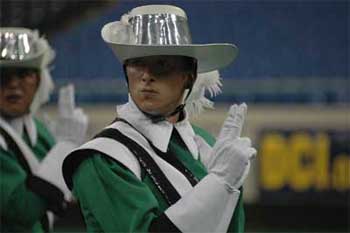 James Bond in the RCA Dome on July 31.
Scott Koter: Going into Murefreesboro, Jeff did a great job in setting up the tour -- where, going into regionals, we were able to be in the same town for a few days in a row. That means a lot, when you don't have to move, and (you) get some time on your back (sleeping). We were actually camped in Murfreesboro a couple days, and really started the cleaning process, and very little changes were needed after that time. Actually no changes were needed after that time. So we put in two good days. They rehearsed well, but because they were so left-brained with the guys, performance-oriented, that we took for granted in the rehearsal that we needed to energize them and emotionalize them, and that might have shown up in the performance that night a little bit. It was a little too cerebral. Huei-Yuan Pan:I would be lying if I said I wasn't disappointed (with the scores in Murfreesboro). This activity is competitive and I am an extremely competitive individual. However, my angst came not from getting a high-enough score, but knowing we had a great product and a lot of work to do before we could perform it at its full potential. In some ways, it was good for us to take second place. All it did was fan the fire that was driving us. Kyle Adelmann: The outcome isn't really anything you can get angry over or blame anyone for, it is just an opinion of that person, at that moment and for that performance. Corps director Jeff Fiedler refused to let the Murfreesboro scores affect him. Jeff Fiedler: (Immediately following the Murfreesboro event I told the corps) Snack is on the truck, make sure the streakers wear shoes, when the horn blows the corps goes -- typical Murfreesboro. As usual the generator on the equipment truck ran out of fuel, so we were a little upset about putting the equipment away in the dark. We slept until noon the next day and rehearsed for about three hours in the afternoon, we had worked VERY hard up to Murfreesboro contest day, and they deserved the rest. Kyle Adelmann: Rehearsals didn't change that much at all, they still kept beating the ending into us! But we just kept working on details to make us that much better knowing that finals were just around the corner. PDF of page 120 of the "007" drill, designed by Michael Gaines Pepe Ochoa: The rehearsals and meetings following Murfreesboro did not change from the rest of the season. We were still focused on the current changes being made to make the show better. We still had the goal of having a better performance each time we took the field. In Indianapolis on July 31, the Blue Devils (96.050) beat the Cavaliers (95.950) for the second night in a row. Kyle Adelmann: The Indy show is always weird because I really don't like what domes can do to a person's mindset. The sound in a dome is obviously different and I think that the release at the end or our ballad is still ringing in there. Scott Koter: The kids were (still) disappointed with the performance (in Murfreesboro), and we didn't really have to energize them much. That day we just talked about communication. That night we were very emotional. Sometimes what happens is that one thing rises and the other thing goes down. We were elated with the way the corps played musically, that night, and visually it was a little rough. The hash marks and the markings in the domed stadium are a little different. Jeff Fiedler: (In Indianapolis we) Played GREAT, best of the year. Marching could have been a little better -- a few of the members got a little confused by all the hash marks on the field (professional markings). Kyle Adelmann: That is one of the first times we ever had to deal with professional (NFL) markings on the field and with only a short rehearsal before that show, it didn't leave much time to let the new markings set in. Within our marching system, the markings on the field are the only 'constant' we have, we don't guide or dress or anything like that, so when the markings aren't the same ones that we have used for the two months prior it takes a lot of guys out of their comfort zones. We had an overall great performance and were ready to go home to Illinois for our home show the next night. Scott Koter: It wasn't until the next night in Naperville, which I wasn't there for, but everyone said everything came together. Jeff Fiedler: (After Indianapolis we had) Tremendous rehearsals -- the show the next day in Naperville (Ill.) was best of the year -- to that point!
Tomorrow in the final installment of this Recap series we'll go with the Cavaliers to Denver for World Championships week. Cast of Characters: Kyle Adelmann -- 2004 Cavaliers mellophone player
Jeff Fiedler -- director of the Cavaliers
Michael Gaines -- Cavaliers drill designer (submitted drill PDFs)
Scott Koter -- program coordinator of the Cavaliers
Rick Lunn -- Cavaliers' assistant tour manager (submitted above James Bond PDF)
Pepe Ochoa -- 2004 Cavaliers guard sergeant
Huei-Yuan Pan -- 2004 Cavaliers front ensemble member
Andrew Toth -- Cavaliers color guard designer Previous Recap features: Eighty-three