Drum Corps International is proud to introduce a new ongoing feature on DCI.org, something we have named "Recap." After every show, one can see instructors and others studying the competition recaps to see how the various captions stacked up. That form of recap is both analytical and informative. But recap also means to look back, go over the main elements of something and sum up what has come before. The new "Recap" feature on DCI.org will cover all the facets of the word, delving into our collective history and allowing us to relive some of Drum Corps International's most significant moments, trends, and people. This will be accomplished through talking with people who have personally experienced the topic at hand, as well as people who have observed it from a distance. For the first few installments of "Recap," we look back 20 years to 1983, when the Garfield Cadets won the first in their ongoing collection of DCI World Championships. It was a show that shocked and amazed those in the stands with a revolution of musical and visual innovation and a stunning performance level one might not expect, considering the corps' rather recent climb towards the top and the difficulty of executing some of the drill elements. The Cadets' 1983 show was a convergence of creative forces, each willing to let the others go out on a limb and drag them along. The brass book featured a degree of transparency and nuance never before witnessed, while throwing out finger-number runs such as those from the mid-voices that floated over "Rocky Point Holiday" after the opening fanfare. The percussion exploded the number of colors heard in still rather new concept of the stationary pit, with a wide degree of wooden, metallic and drum sounds sparking forth during the remainder of the show, based on Leonard Bernstein's "Mass." But it was George Zingali's legendary approach to drill design that perhaps shocked the most. Sometimes referred to as "flex-drill," the static forms of the past were wiped away by a series of asymmetrical kaleidoscopic evolutions that resembled the movement of droplets of water and amoebas moreso than traditional drill forms. In seasons that followed, the effects of Garfield Cadets' 1983 show could be seen in how other creative staffs approached the construction of their own corps' shows. Brass musical scores became more transparent when possible, percussion musical scores, especially in the pit, explored a far wider palette of sounds, and drill forms became more a travelogue through unique shapes and unexpected evolutions. Drum Corps International has many such moments through the course of its history that identify major turning points for the activity. It seems appropriate to start with the 1983 Garfield Cadets' show, where the multitude of simultaneous turning points made sure that the activity hasn't been the same since. This first feature will take place in five installments, one each weekday starting today. If you have an idea for a future installment of Recap, send it to content@dci.org Read part 1 of "Eighty-three" Read part 2 of "Eighty-three" Read part 3 of "Eighty-three" Read part 4 of "Eighty-three" Read part 5 of "Eighty-three" Prelude Al Chez: In 1981, besting the Bayonne Bridgemen at DCI Midwest Finals gave us hope and dreams of being one of the big boys. We were hungry, and the higher we moved up in the DCI ranks the more we wanted. We needed to maximize our program. Beginning in 1982, the design staff put more and more emphasis on the performer and challenged us to maximize the performance. Then in 1982 in Huntington, W.V., we defeated the Santa Clara Vanguard for the first time in the corps history. As a side note, this contest gave us our first real taste of our potential. No one saw this coming, not even us. The corps was not in the financial situation it is now. I remember waiting until SCV had left the stadium in their new vehicles for us to depart. We were all wondering why it was taking so long. The truth is we had to get all the guys off the buses and push some of the vehicles to start them. It seemed funny for the winner of the show to have to do this. Finishing the 1982 finals in third place gave us such confidence going into 1983. Corps did not jump two top spots from prelims to finals. Also, the Montreal fans were fantastic to us. Patrick Zampetti: I think (the third-place finish in 1982) helped us to believe that we were right and that we really should not rely on the judging community to determine what constituted high achievement within the idiom. We did place fifth in the prelims, though, and I was not happy. I guess I just let the judges get to me a bit and forgot for a moment that we were really just competing against ourselves. 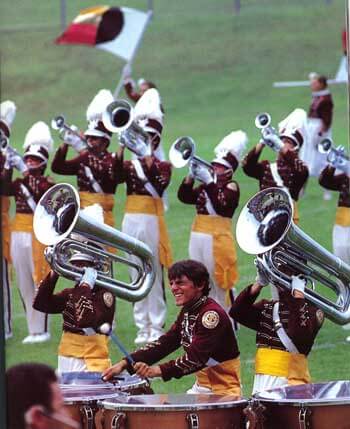 The Garfield Cadets. Picture from the 1983 DCI program book.
The fall and winter of 1982 George Hopkins: I wanted to be a corps director since I was 16. I always had too much to say, I was always involved, I was always at the heart of the discussions. I aged out of the Crossmen in August of 1978. I started as a percussion instructor with the Cadets in 1979. The summer of 1979 I was the staff coordinator, the winter of 1980 I went full time as the assistant director. And in September of 1982 I became the director. Doctor Santo was the director and my boss before his retirement. He invited me for breakfast. I thought it was an end-of-year review. He explained of his need to retire, he turned over the checkbook, and away I went. I was 25 when I became director. Hopkins assembled a drum corps staff straight out of central casting to lead the 1983 Cadets: Drum corps legends Michael and Greg Cesario, Marc Sylvester, Jim Prime, Peggy Twiggs, Al Chez and Thom Hannum, among others, teamed up with a true drum corps genius, the late George Zingali, to begin conceptualizing the 1983 show. George Hopkins: George Zingali was special. He thought far out of the box.
He was eccentric, he was non-conformist, he was exciting, and he was passionate about the art. He was a joy to work with. And, well, sometimes difficult. He made the Cadets the Cadets in the beginning. For all of the greatness of Michael Cesario, or Jim Prime or Thom Hannum, Zingali made us different. He gave us identity. He forced us to be someone else. Mike Moxley: It was that unique design group that put it together. Behind it all, George Hopkins picked all these lunatics. It was the team -- you can't even talk about these guys without mentioning Cesario. Michael articulated the vision. Michael Cesario: We all were kind of crazy ... Jim Prime: I think that the notion of the progression and conclusion of one season energizing and feeding into the next was a common theme for the Garfield Cadets during those developmental years of the 1980s. This was true in the sense of challenging the performers and the staff. That is, pushing the achievement standard and the design envelope was emphasized. The master plan conceptualizations were in the minds and hearts of Michael Cesario and George Hopkins. The work of George Zingali was of course a great catalyst in the progression of the design. Zingali, Thom Hannum (percussion) and Greg Cesario (guard) seemed to be in a period of awakening as far as uniqueness and freshness. In a housing situation that would give MTV's "The Real World" a ratings challenge, four members of the Cadets' leadership team shared a house in Teaneck, N.J. in the winter of 1982. George Hopkins: I was the "landlord." Marc Sylvester, Zingali, Jim Prime and I shared a house for a few years. Indeed, because we lived together, we worked all of the time. There were no meetings to discuss the show -- we just did it all day. George thought nothing of waking me at 4:30 a.m. to check out the next page of drill. It was a great situation -- we missed it when it was over. When I became engaged to be married, Zingali was not pleased as it meant I was leaving the house. It was difficult to grow up! It was such a good time from 1982 to 1984. On Thursday, we'll look at how the Garfield Cadets' 1983 show came together. Cast of Characters: Greg Cesario – Cadets' dance choreographer in 1983; now an antique dealer Michael Cesario – Cadets' program coordinator in 1983; now a uniform designer and college professor Al Chez – Cadets' brass technician in 1983; now trumpeter on "The Late Show with David Letterman" George Hopkins – director of the Cadets in 1983; still that corps' director Mike Moxley – Blue Devils' designer and instructor in 1983; would become Blue Devils' executive director in 1984; now a stockbroker in San Francisco Jim Prime – Brass arranger for 1983 Cadets; still a drum corps brass arranger Eric Sabach -- Garfield Cadet baritone player, 1981-1984; currently a DCI judge. Johnny Sanchez – Garfield Cadet baritone player in 1983; currently Phantom Regiment's drill designer Marc Sylvester – Cadets instructor in 1983; will design the Cadets' 2004 show Patrick Zampetti – Cadets snare tech in 1983; founded Studio Z architecture firm in Richmond, Va. George Zingali – Cadets drill designer in 1983; died in 1992