Happy New Year! 'Tis the season of rebirth, renovation, and reinvention. It's kind of like spring cleaning, but for the self rather than the house or yard. 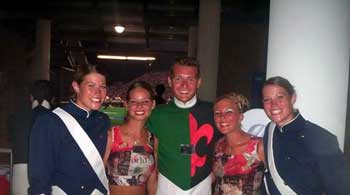 From left to right: Maria Ashton, Becky Novac, Ben Firkus, Ashley Studer and Jenna Ashton at the Murfreesboro show.
Everyone always asks me what my new year's resolution is. I honestly cannot remember any year that I actually declared a new year's resolution. Maybe in my mind I've decided to start the new year off a little different but it's never been anything worth bragging about. Besides, my theory is you shouldn't make a resolution once a year, instead set and accomplish goals throughout the year. Hopefully everyone already sets goals instead of waiting for a once year event when you can brag about what you're already doing. Every summer I wouldn't really set any goals for the summer other than personal goals such as rehearse like I would perform, not hear my name called at rehearsal, etc. Nothing to out of the ordinary, except last summer when I decided that I should meet new friends besides Bluecoats. It's not that I didn't love every single one of my Bluecoat friends, but I thought there has to be some fun and friendly people in other corps that would want to hang out. I didn't think it was going to be easy finding random people but maybe I would meet friends of friends and we all could hang out after shows. My first non-Bluecoat friend was Ben Firkus, the Madison Scouts drum major, who I met through our mutual friend Ashley, one of my color guard captains. Ben and I started talking on the computer and eventually met in person at a show. Ben and I had a great time when we would get to hang out after shows, unfortunately Madison and the Bluecoats were only at about seven shows together. Despite the lack of shows, I managed to meet a handful of other great Madison Scouts as well. Ben introduced me to his entourage of Madison boys, including the other drum major, Dave. Dave, along with a few others that I met, rode the Madison drum bus; needless to say they had some crazy bus adventures (just like I had on our drum bus) that I would get caught up in. Somehow one of the boys got a hold of my cell phone number, typically after we left the show site, someone would call and include me in the night's discussion and events. Justin Ashton, a Madison Scouts tenor player, just happened to be the brother of the Bluecoats cymbal twins, Jenna and Maria, who sat in front of me and across from me, respectively. Justin and Dave hung out a lot and eventually it turned into a small group of us both Madison Scouts and Bluecoats that would hang out after that handful of shows. By far the corps we were with the most throughout tour were the Cavaliers. I think there were about five shows that we didn't see the Cavies. Most times, we would line up next to them for retreat. I honestly don't know how it happened but somehow I started talking to the horn line while we were waiting for retreat. The trumpets mostly because they were the first section after the color guard and seemed to line up next to the back half of the color guard. I lost touch with most of the people I met outside of Bluecoats this summer, in fact I rarely talk to Ben that often, but we try and catch up when we both have the chance. I tried to find the Cavies that I met, and only found a couple. Still, it was great meeting what ended up being a ton of people outside of my organization. When I thought about my "resolution" to met other drum corps members rather than sticking by all my Bluecoats I didn't know it would be so easy and fun. Two weekends ago, a few Bluecoats were guests of Cavaliers at their annual banquet. Some were boyfriends, others were close friends that they randomly met because we were with them so often over the summer. It's a simple thing that I did this summer, meeting new people, and it wasn't even a new year's resolution. Becky Novac currently lives in Hoboken, N.J., and works for Universal McCann in New York City as an assistant media planner. She is 22 years old and a recent graduate from Penn State University where she majored in journalism and psychology. Becky marched with the Bluecoats in 2000, 2002 and 2004 as a member of the color guard. Past columns by Becky Novac: It's the little things A Rock star Remembering the passion Banquet weekend Missing out Unknown suitcase adventures The Even years