Becky Novac, an alum of the Bluecoats' color guard, will be contributing a column to DCI.org every Thursday. This is her sixth installment. Every time I read one of those celebrity magazines like People or US Weekly, they always report that some celebrity was in New York City shopping, eating, picking up dry cleaning, etc. In other words, somewhere right underneath my nose, a celebrity that I am dying to meet is outside while I'm stuck 20 floors in the air in my grey lifeless cube. 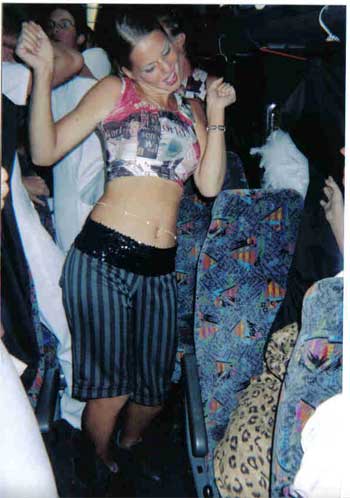 Becky Novac as rock star.
Of course, I've eaten at the same pizzeria that Mary-Kate and Ashley Olsen love to go, but that maybe my only superstar celebrity connection that I've had since moving here. Then again when I do walk around downtown, I walk with a purpose and don't pay attention whatsoever to those around me, most of the time I wish the people around me would just get out of my way. The American culture is obsessed with superstars and the whole celebrity culture in general. I'll admit to screaming like a 14-year-old when I went to the Britney Spears concert (I just let out my shameless addiction) and I faithfully try and keep up with E! Entertainment News. We all want to be a superstar celebrity. Thankfully, I have had my own taste of superstar power. I have done a couple of things that have made me feel like a complete rock star, but nothing compares to the rock star feeling of performing with the Bluecoats. Think about it, how many people can say that they've had hundreds of thousands of people PAY to watch them? Not many. I know for sure that my Britney Spears concert probably only had about the same number of fans in attendance that DCI finals had, then again it was in State College. But still, for the short period of time that we perform, we have the ability to engage an active audience and bring them into our world, even if it's only for 10 minutes. Maybe that's why rock stars can have one-hit wonders and drum corps stick around for a whole lot longer. We are like U2, Madonna, and many other ever-changing rock stars that we still love even if their first album was released when I wasn't alive. Madonna has changed her look and style of music more times than I can count. The activity has changed too, thankfully, and the audience has embraced the changes, or I would have aged out doing cones and drip spins while high-step marching in a straight line. Wouldn't it be nice if we didn't have to run a mile every morning to stay in shape and just did power yoga instead, like Madonna (the horn line and drum line would probably kill me for saying that)? Despite the changes, we still give a rock star performance for fans that paid sometimes more than my monthly bus pass to see us. Some days my energy was not up to par, everyone has those days. I would get through the day but know that I would try and gather every ounce of energy I had for my performance because some high school student saved up their paycheck or allowance just to see me. Even if they weren't exactly there to see the Bluecoats, I would give every ounce of energy to make someone a new Bluecoat fan. Performance pressure comes from being a professional and from being a professional comes the responsibility of being a role model to someone. The greatest shows besides regionals and finals are those that high school students come in busloads. They clap and scream for everything! These are the shows where you knew that one of those screaming high schools kids wants to be you. After shows it's amazing how kids come and ask for your autograph. I remember two little boys probably around 8 and 10 years old who each were wearing a DCI T-shirt and peered through the clump of uniforms and cautiously would ask for an autograph, extending their little hand with a sharpie marker. I could tell they weren't asking everyone, they would sit there look around, and whisper to each other, get the courage to walk up to some member and just ask. Warm-up, who would watch warm-up? It really isn't all that exhilarating but if I wanted to be Madonna I would watch her sound check and pre-show rituals. The amount of people that came and stood around when I was doing my Janet Jackson stretch sequence made me want to perform every count, even if it was just warm-up, just a stretch. Since aging out I think I've been searching for that same rock star feeling. I've come to the conclusion that since I have no singing or acting talent and I wasn't born into some celebrity family, my rock star days are over. I know that I'll feel like a rock star again when all my goals are fulfilled in life, but even then, 30,000 people are not going to give me a standing ovation. Looking back on finals night, I did one thing that my caption told me to do when I was leaving the field in twos: I looked at the audience. I took it all in. I tried to listen to each individual clap and voice that lovingly screamed "BLOO!" No one ever told me to look back before and realize just how many people loved what I had accomplished. I almost stopped to make sure I would remember all the people on their feet. You probably won't ever read about me in People or US weekly. Even when I'm a CEO of some company, I doubt I'll be in either of those magazines or walk around town with jumbo sunglasses on trying to protect my identity but because of drum corps I know that I was once a rock star. Becky Novac currently lives in Hoboken, N.J., and works for Universal McCann in New York City as an assistant media planner. She is 22 years old and a recent graduate from Penn State University where she majored in journalism and psychology. Becky marched with the Bluecoats in 2000, 2002 and 2004 as a member of the color guard.
Past columns by Becky Novac: Remembering the passion Banquet weekend Missing out Unknown suitcase adventures The Even years