By Allison Owen One thing I've noticed in my experience with corps is that no matter how long corps friends are apart, as soon as they're back together, it's like they never were separated. 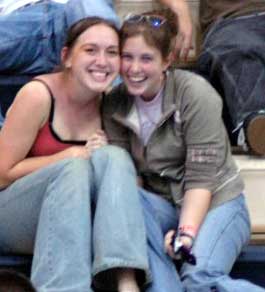 Amanda and Allison at the WGI regional
This weekend was the WGI Nashville Regional. The past two years I had gone and really enjoyed the percussion site more than I did the guard. This year it seemed like I wasn't going to be able to go, so it was kind of depressing for me because I had several friends from corps that I knew would be there. In the end I was able to go and I'm so glad I did. When I first got to the school I went off in search of my friend Amanda -- from the Memphis Sound front ensemble -- and after several minutes of searching, I found DCAccent's room. The look on her face when she saw me was priceless. Any performer knows how great it is to have someone at your show there to see you, so I know exactly how she felt. I walked with her to warmup and we caught up on our time apart. Almost instantly it was like we never left the summer. I ended up helping pull equipment for them, which is always fun for me because I miss being on the inside of these competitions. Once we loaded up DCAccent's equipment, Amanda and I set off in search of other Memphis members/alumni. I won't bore anyone with details, but every time we would see someone else we marched with it was this insane feeling of euphoria. These people are part of my family, seeing them is just indescribable. Over the course of the weekend I saw two front ensemble members, Amanda and Austin; four snares: Drew, Brian, Matt and Matt; two horn line members turned indoor percussionists: Ryan and Andrew; one of my bass line guys, Jordan; a fellow guard member, Leslie; Brandon, one of our cymbals; and a few staff members: Kevin the snare tech, and then of course the wonderful Bohannans.

Seeing all of these people was like being back on tour. It brought back memories and gave this feeling like I was on tour again. It was like escaping reality for a weekend. It was also cool to see all of them in performance mode again.

Ryan and Andrew aren't even in the drum line at corps, but they were pretty awesome -- not that I'm biased or anything -- at bass and tenors, respectively. Jordan's bass break was pretty sweet; it made me realize how much I miss my Memphis Sound bass line. Amanda, Drew and Matt had a different level of intensity than the rest of their ensemble. They were at this higher level of performing because that's what we're used to doing as corps members. We spend every day performing during the summer; we learn to "turn it on." That's one thing I know that corps taught me for sure: how to perform. There were several times when I found myself wondering if a certain member of an ensemble had marched corps -- or at least been in indoor for a while -- and later on I would find out that they certainly were more experienced performers. There's just something about corps that I've found to be very awesome for an individual.

Other than performing and making the best friends one could possibly imagine, the key thing that corps did for me was to teach me to take risks because I never know what might happen. But, that's another story for another day. Allison Owen, 16, is a junior at Sullivan Central HS in Blountville, Tenn. She's in my second year in the Memphis Sound guard and enjoys dancing, writing, English, guard, photography, having fun and performing. For college she would love to attend the University of Oklahoma and major in journalism or English; however, she'll probably end up at the University of Memphis for in-state tuition's sake.