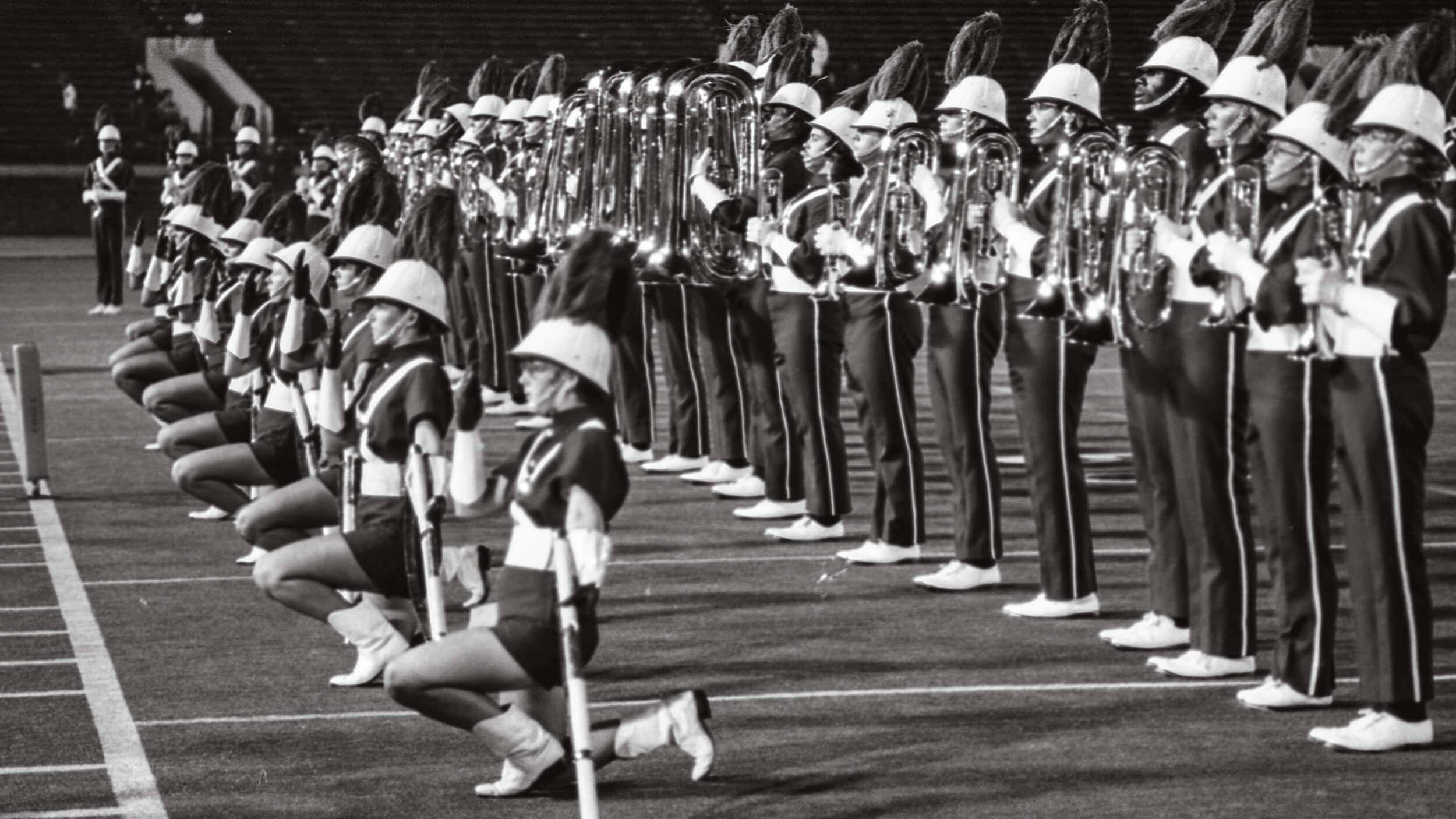 Philadelphia hosted the 1975 Drum Corps International World Championships at the University of Pennsylvania’s Franklin Field. “The Birthplace of American Democracy” served as the perfect location as the nation began its Bicentennial celebration, a year-long festivity that had begun on July 4.

Also in 1975, PBS television viewers enjoyed the first-ever nationwide telecast of the Finals competition, witnessing live the crowning of Madison Scouts as the new DCI Champion.

Dominating much of the summer, the Scouts missed out on a perfect season after losing the DCI Midwest Prelims by 0.15 points to Santa Clara Vanguard. The California corps finished the season in second despite receiving perfect scores in all three General Effect captions (Brass, Percussion, and Marching & Maneuvering). Blue Devils jumped into the top three, one year after making the Finals for the first time and one year before winning the corps’ first DCI title. 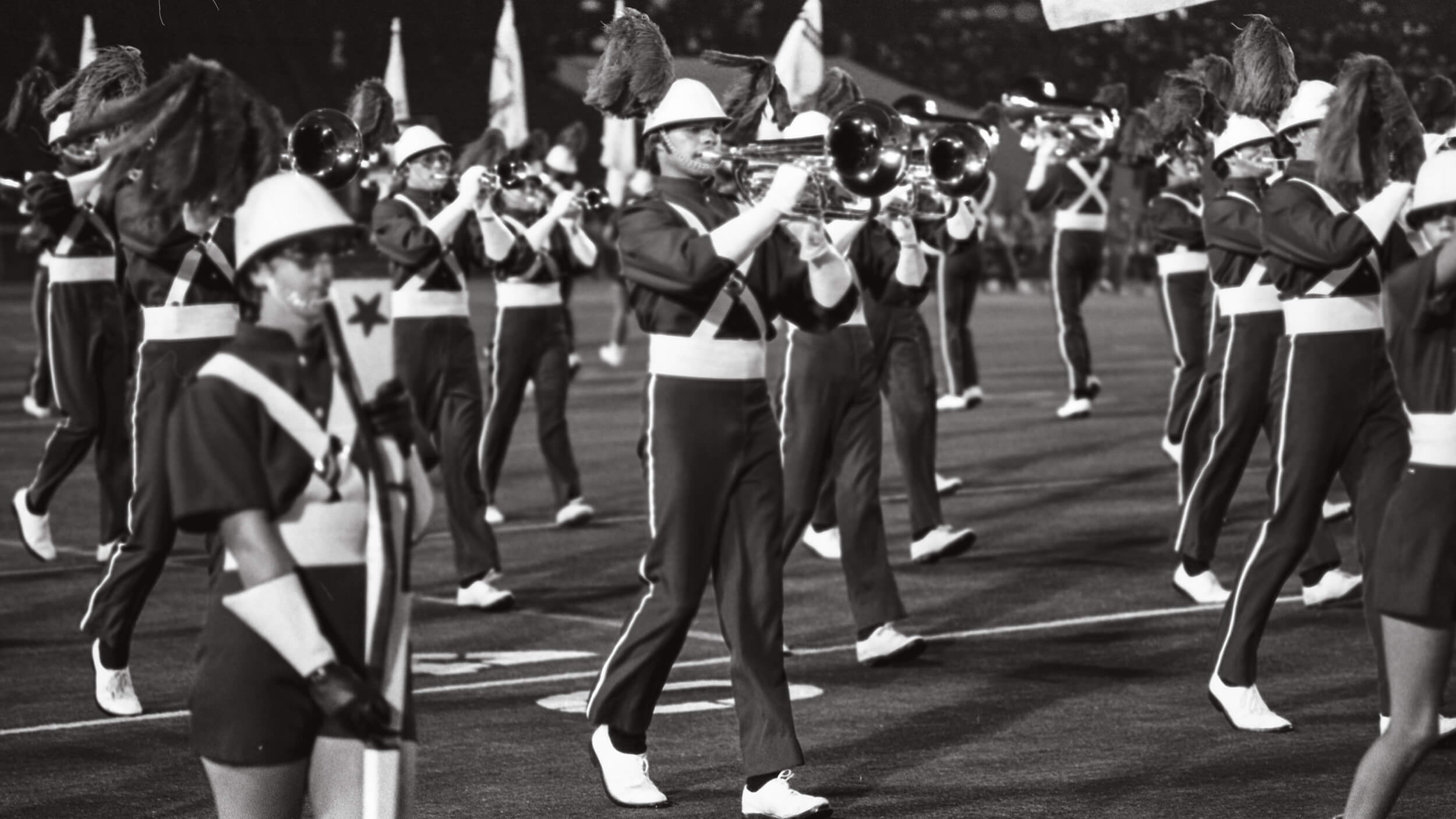 The fifth-place Blue Stars improved on their 12th-place finish from 1974, picking up new members during the season to fill in an abnormally small horn line from the start. The corps executed well enough to finish second in the Marching & Maneuvering caption in the World Championship Finals.

Much of the corps’ success came from picking up DCI Hall of Fame member Bobby Hoffman to write the drill formations. Hoffman had just come off a successful season with 1974’s third place corps, Anaheim Kingsmen, and was working his way from California to the east coast, where in 1976 he would turn the activity upside-down as the innovative show designer for the Bridgemen.

The single design of the Blue Stars color guard’s flags, duplicated on the marching timpani, featured the five-point white star surrounded by curved outlines of blue and red that served as the official logo of the Bicentennial. Since DCI rules did not allow equipment to be set down on the field, whatever flags were featured at the beginning of a corps’ show were the same flags still seen at the end.

Blue Stars opened their production with Peter Mennin’s “Canzona,” composed in 1951 on commission from Edwin Franko Goldman, composer and founder of the American Bandmasters Association and the namesake of the Allentown, Pennsylvania band shell that sits about a half-mile east of where the DCI Eastern Classic is annually held. The work is the only piece the modernist Mennin ever wrote for concert band.

In some sections of the music, horns clustered in pods facing each other. They also formed an upside-down rendition of the corps’ iconic five-point star. At the end of the opener, the corps pushed forward in a five-leaf formation that some perceived as a sly visual allusion.

A medley of Chicago songs performed without stops formed the bulk of the production. James Pankow, trombonist for the band, wrote “(I’ve Been) Searchin’ So Long” for the 1974 “Chicago VII” double album that combined jazz instrumentals with a mixture of pop and rock. As the corps traveled backfield, Hoffman’s drill spelled out “CTA,” referending “Chicago Transit Authority,” the band’s original name until the actual CTA threatened a lawsuit. 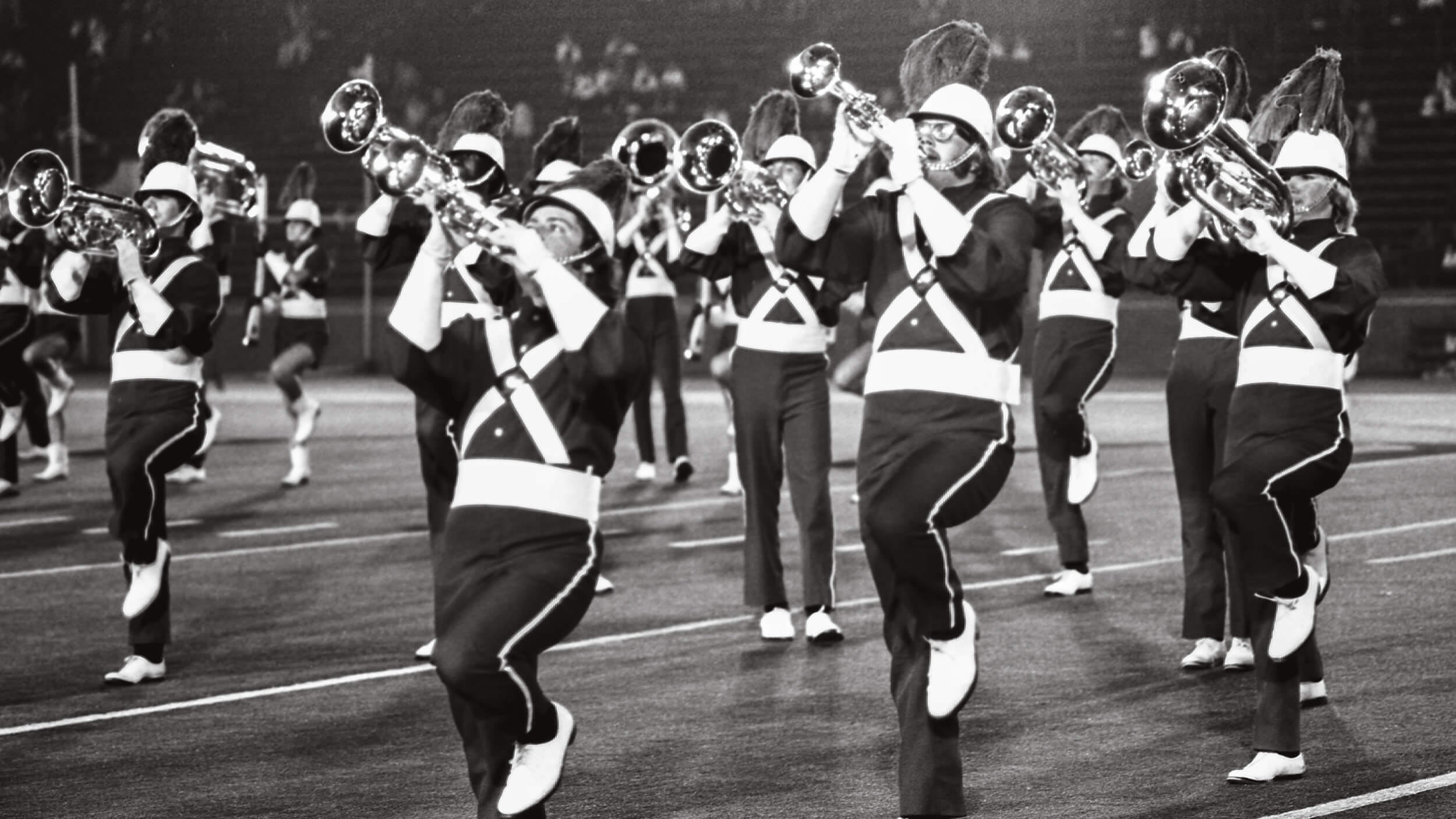 The middle part of Terry Kath’s “Introduction,” the first selection off the band’s 1969 debut album, served as Blue Stars’ concert standstill. At the time, it was pretty much a given that a concert production would be the fastest and/or the most technically challenging part of a show. Instead, Blue Stars chose to defy expectations as it was the slowest piece in the entire show.

The corps spelled out “Chicago” at the end of the medley. The first “C,” comprised of flags, and the “G” and “O,” made up of horns, weren’t easily readable, especially as the “O” had a tail of flags extending from it. It’s said that one adjudicator continaully asked in hia recorded judging commentary, “Hica? What the heck is Hica?”

Moving to the exreme right side of the field, the corps utilized woodblocks to create the sound of horse hooves for Billy Joel’s “Ballad of Billy the Kid” off the artist’s 1973 “Piano Man” album The song is a fictionalized account of the infamous Wild West outlaw, with music said to be reminiscent of Aaron Copland and Ennio Morricone.

Joel’s tune blended into an extended closing tag of Bob James and Richard Evans’ “Soulero,” off James’ “One” album of 1974, an early entry in the smooth jazz genre. James may be best known for his theme to the television show, “Taxi.” Inspired by and featuring a similar repetitive rhythmic beat to Maurice Ravel’s “Bolero,” the selection returned to end Blue Stars’ shows the next two seasons.

For the first half of the season, the corps formed a block wedge on the right side of the field and carried it to the center of the field, ending the show with the abrupt ending as heard on James’ album. As the season progressed corps designers rewrote the finish to have the horns split into two symmetrical blocks, with the final bars of music given a more typical drum corps style.