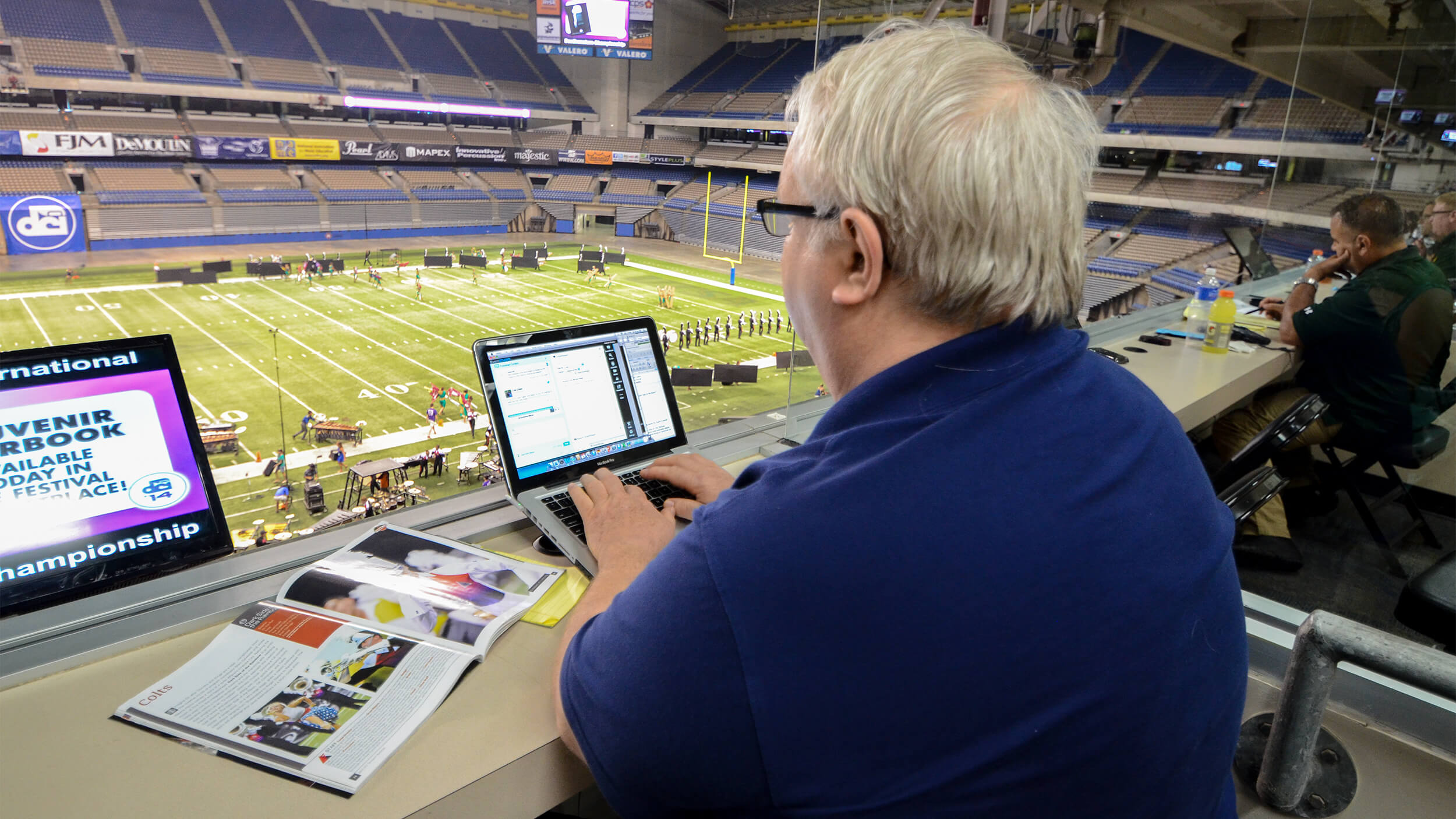 Michael Boo works from the press box at the 2014 DCI Southwestern Championship in San Antonio.Photo by: Drum Corps International

Michael Boo works from the press box at the 2003 DCI World Championships in Orlando. 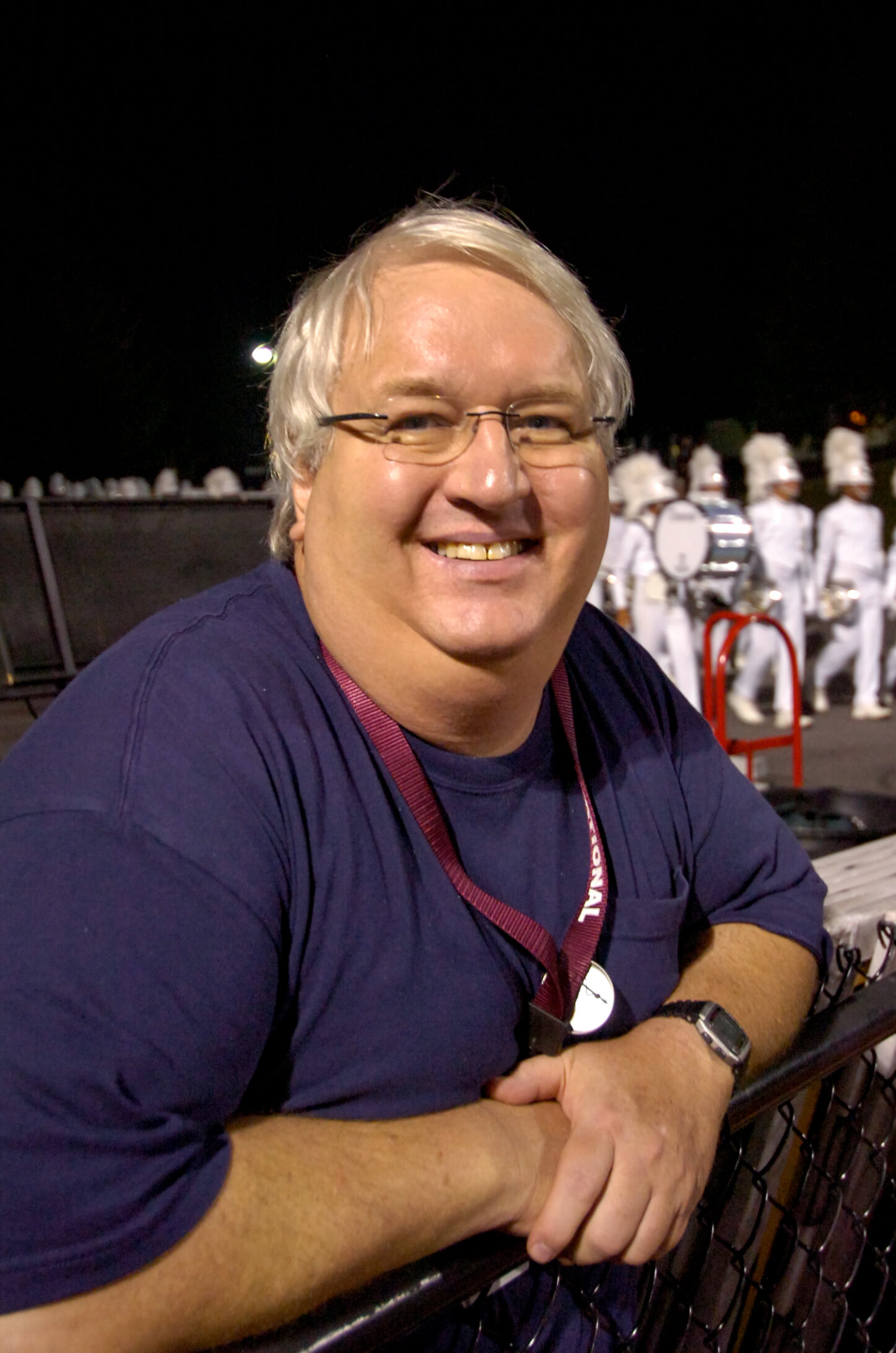 Boo on the sideline of J. Birney Crum Stadium during the 2010 DCI Eastern Classic in Allentown, Pennsylvania. 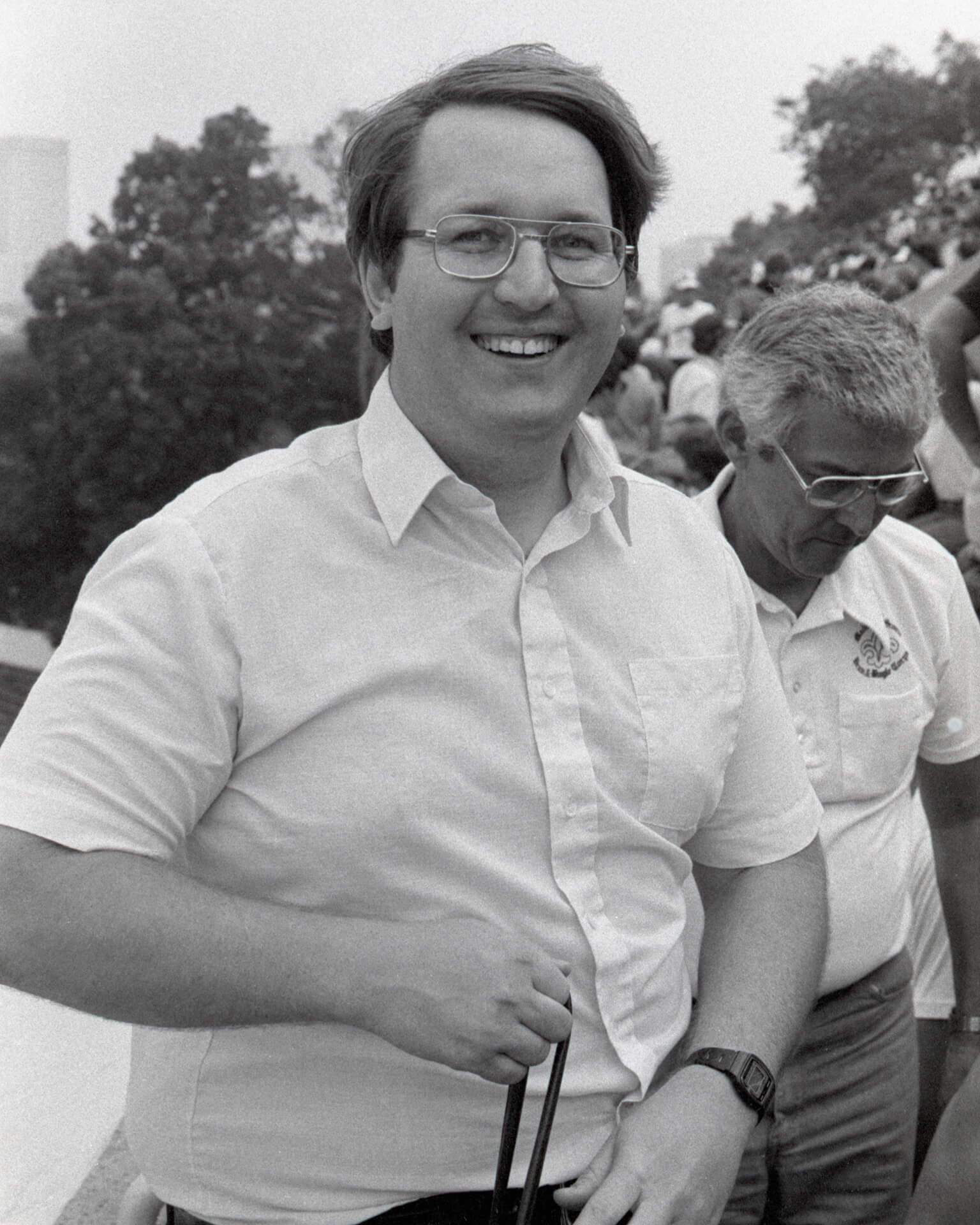 Boo at the 1984 DCI World Championships in Atlanta.

Boo works from an impromptu desk writing outside a stadium in 2005. 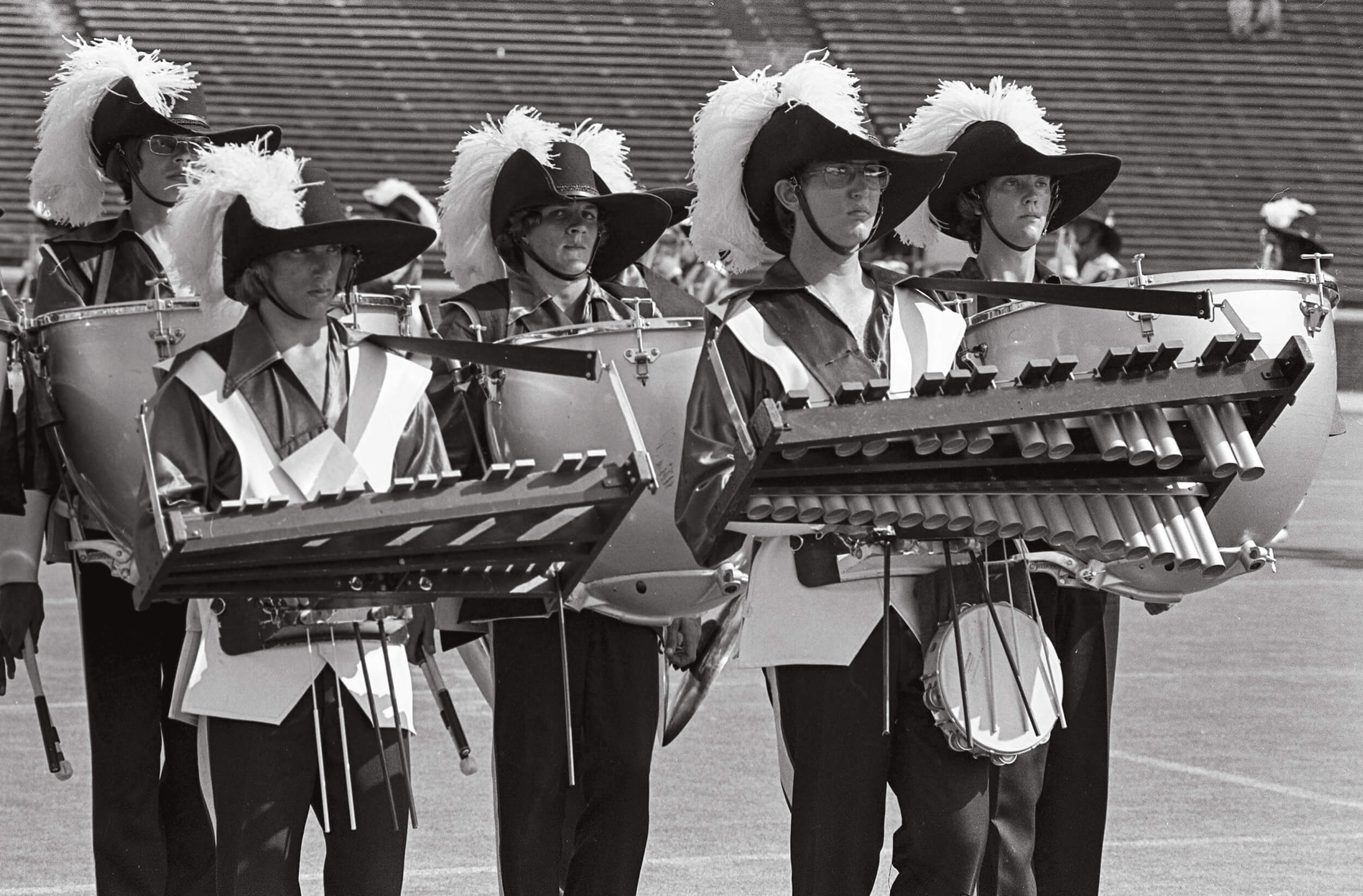 Boo (front right) performs with The Cavaliers in 1976. 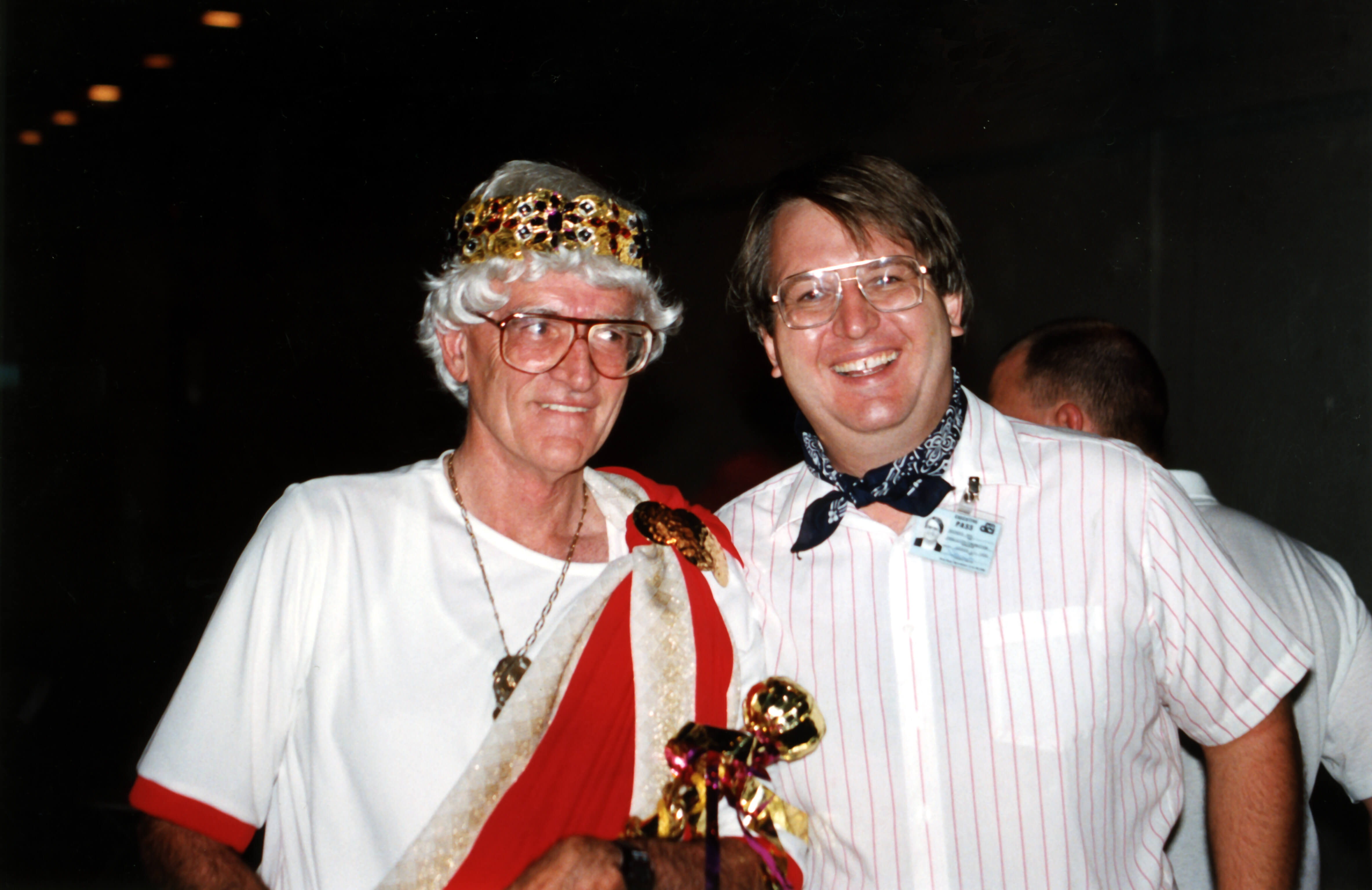 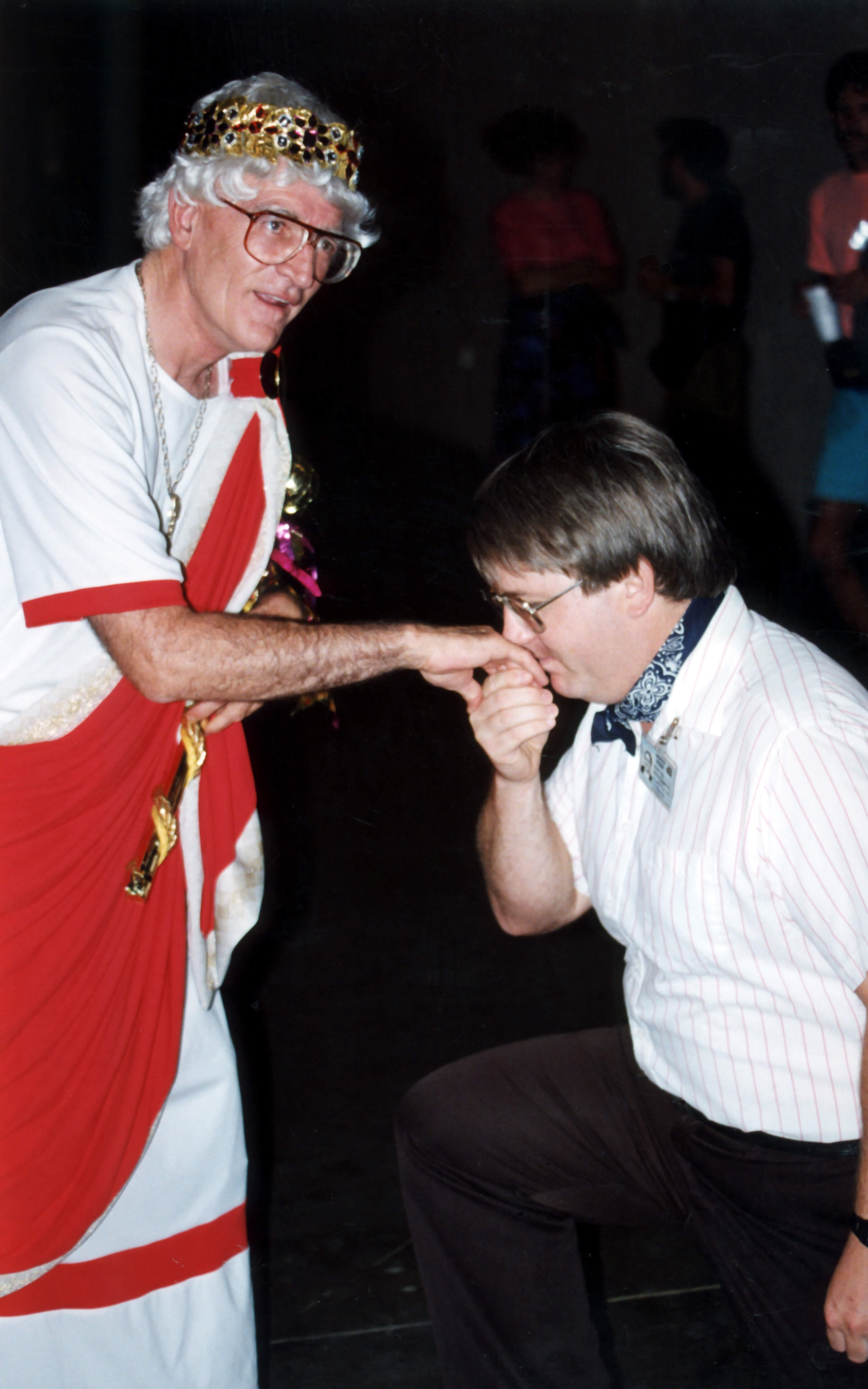 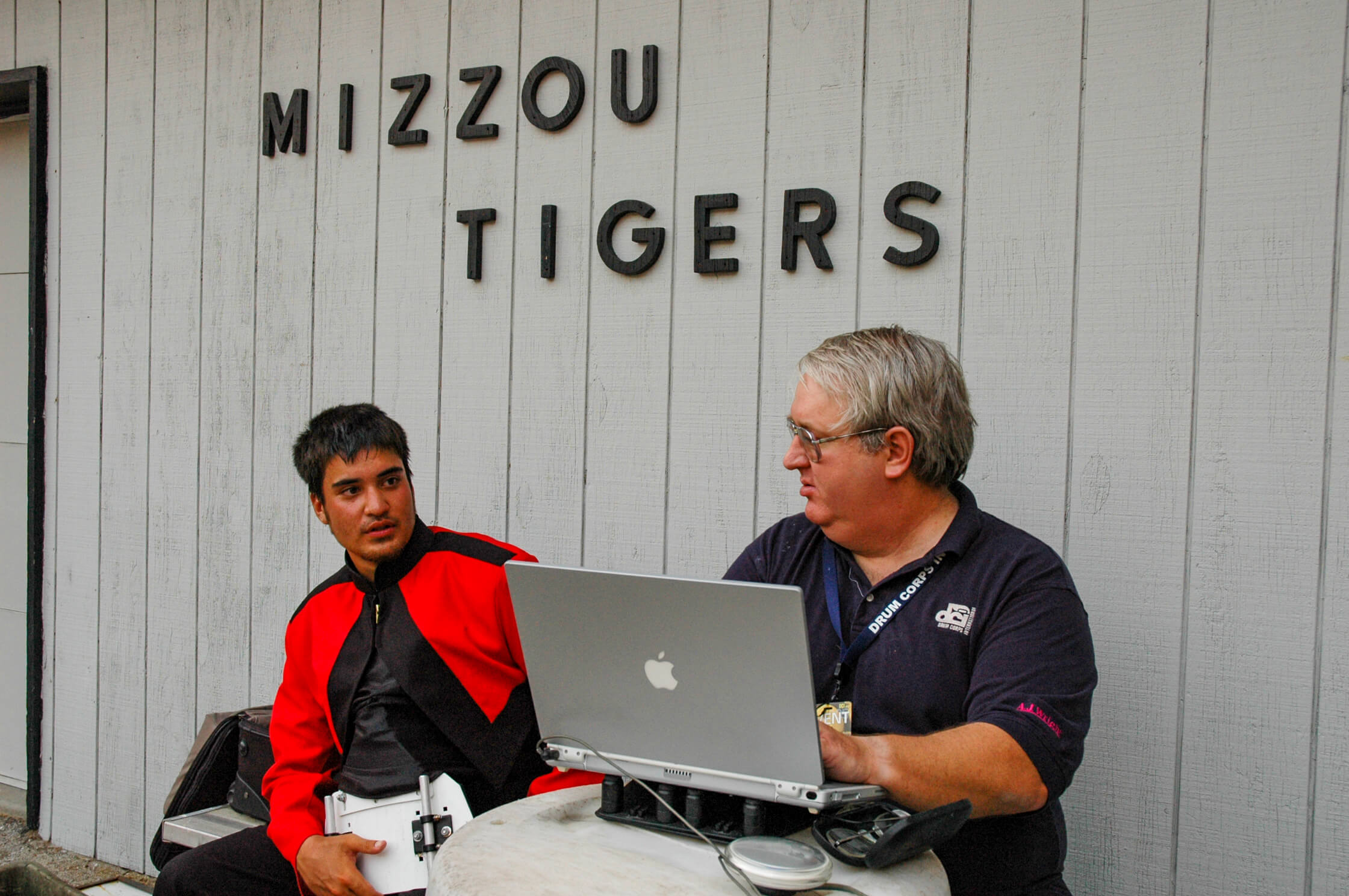 Boo interviews a member of the Kiwanis Kavaliers in Missouri during the 2005 DCI Tour. 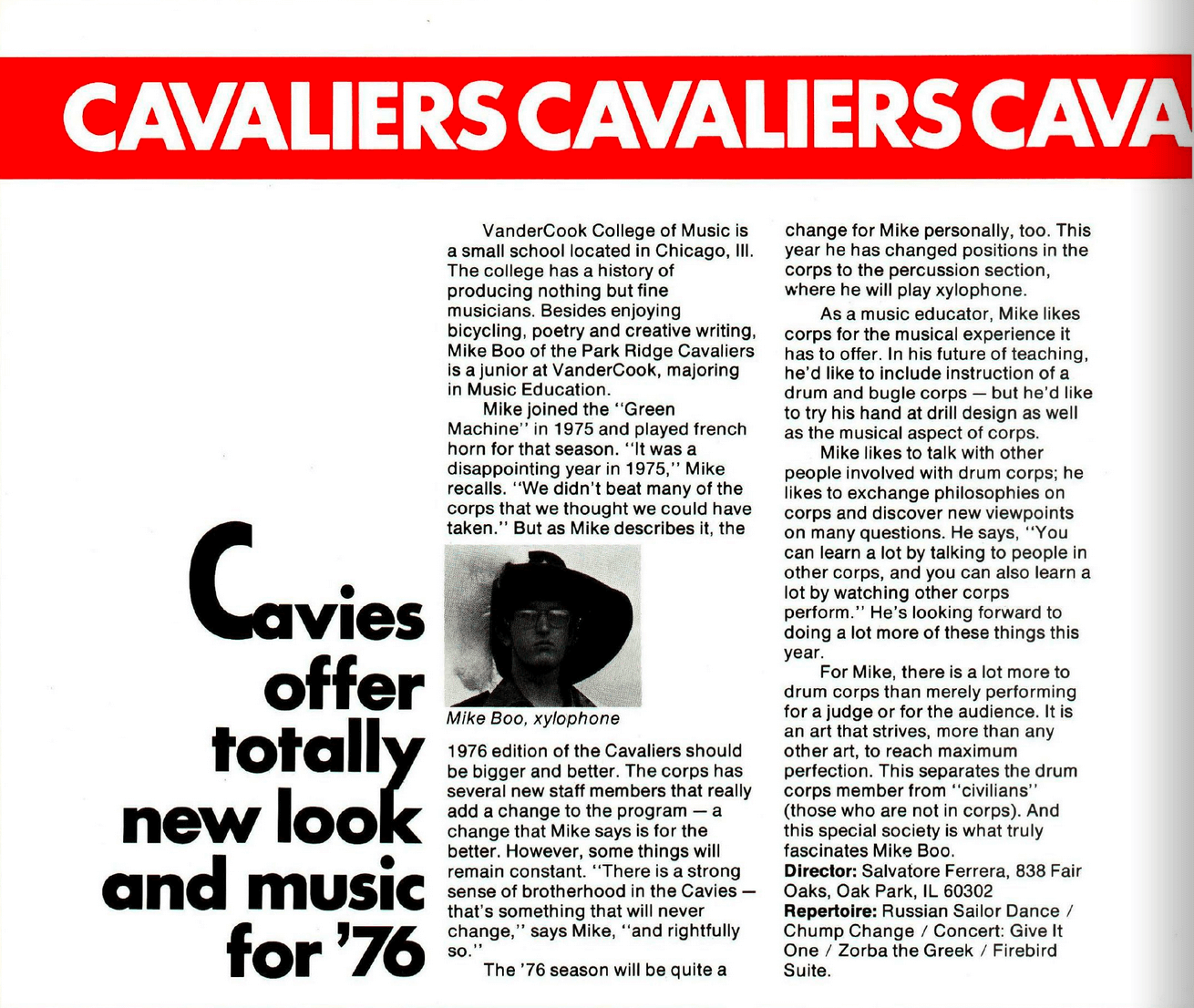 A page from the 1976 Drum Corps International souvenir yearbook that featured Boo.

Boo performs with the Cavaliers Anniversary Corps during the 2008 DCI World Championships in Bloomington, Indiana. 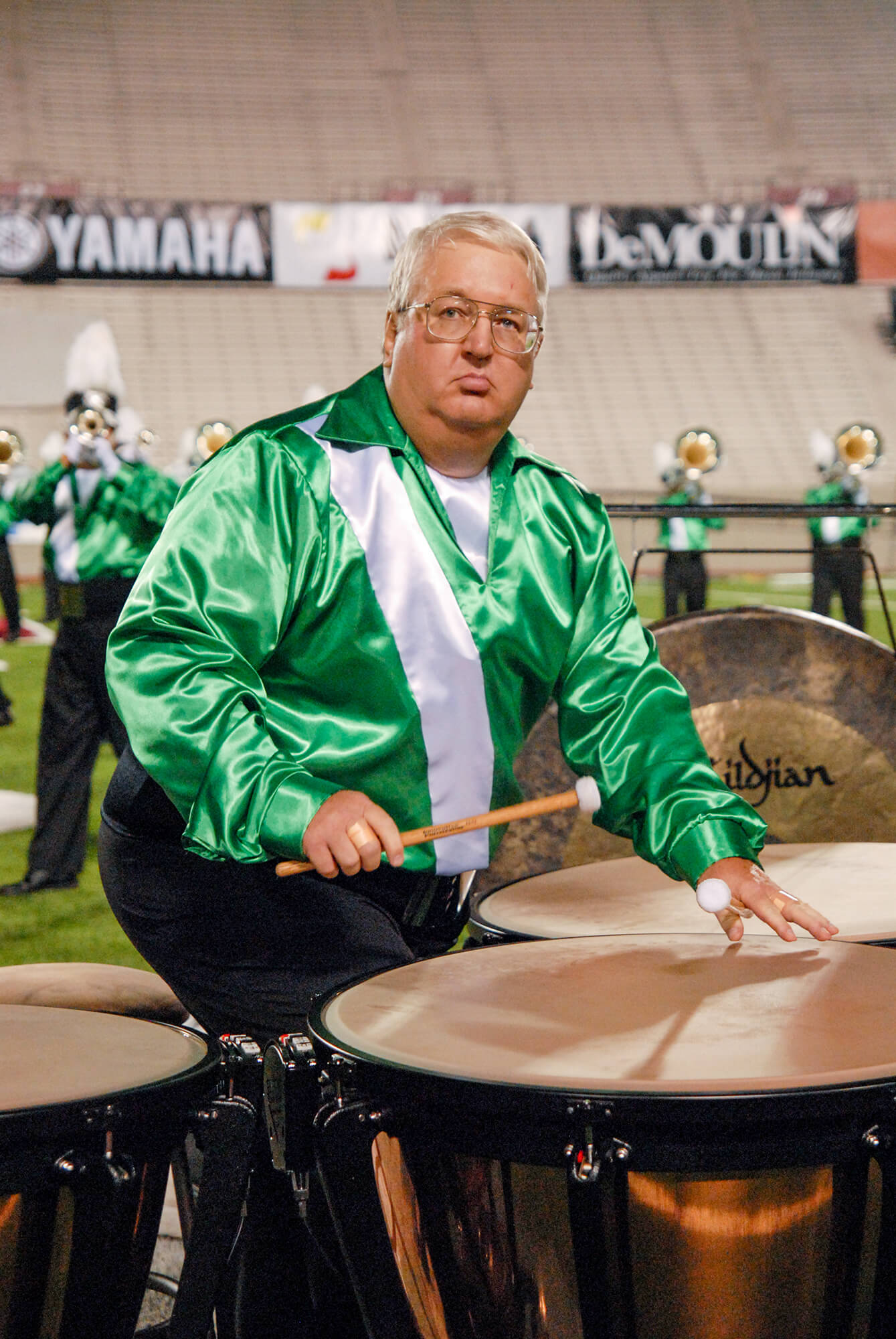 Boo performs with the Cavaliers Anniversary Corps during the 2008 DCI World Championships in Bloomington, Indiana. 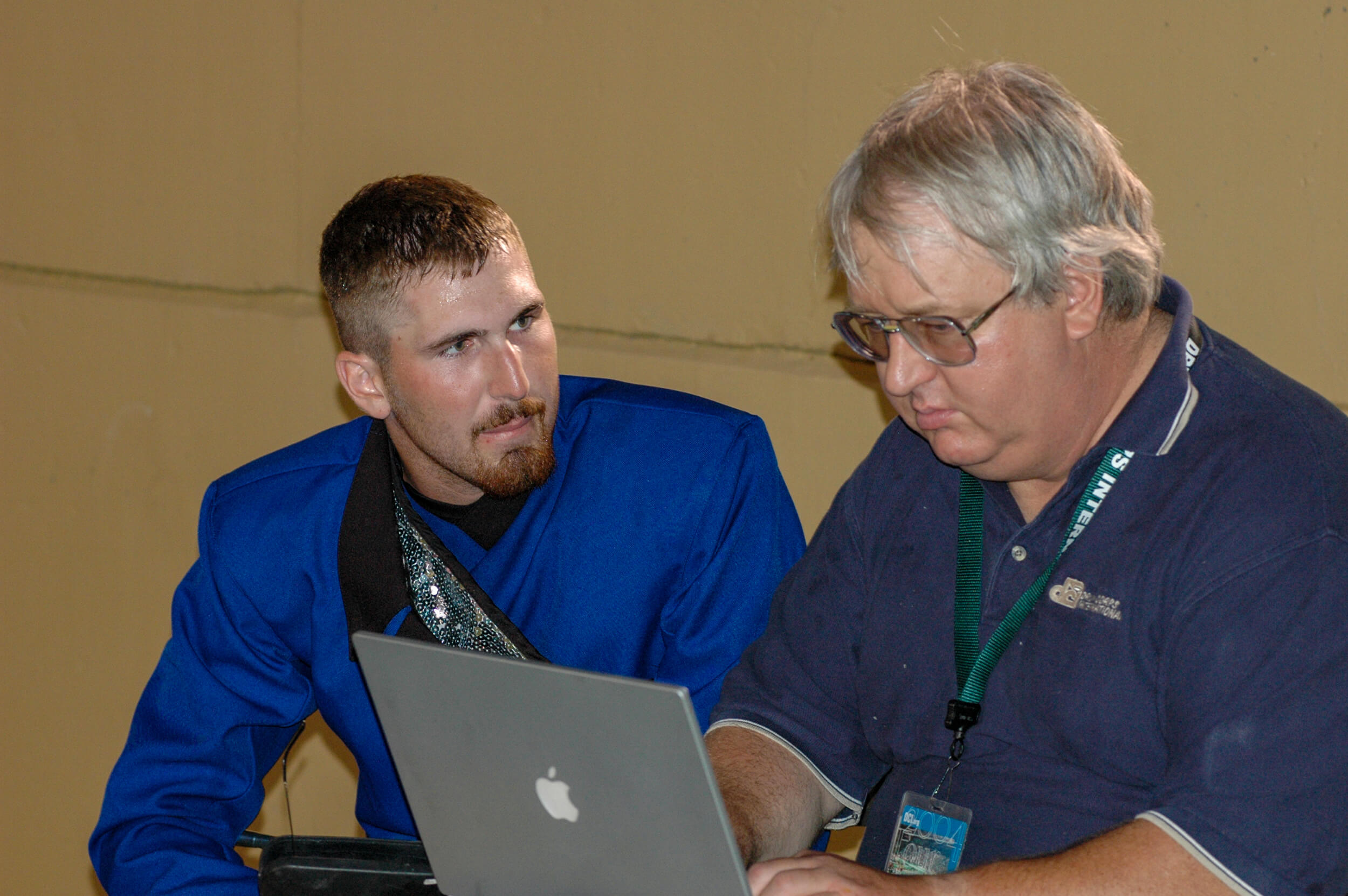 Boo interviews a member of the Blue Devils during the 2004 DCI Tour in Kalamazoo, Michigan. 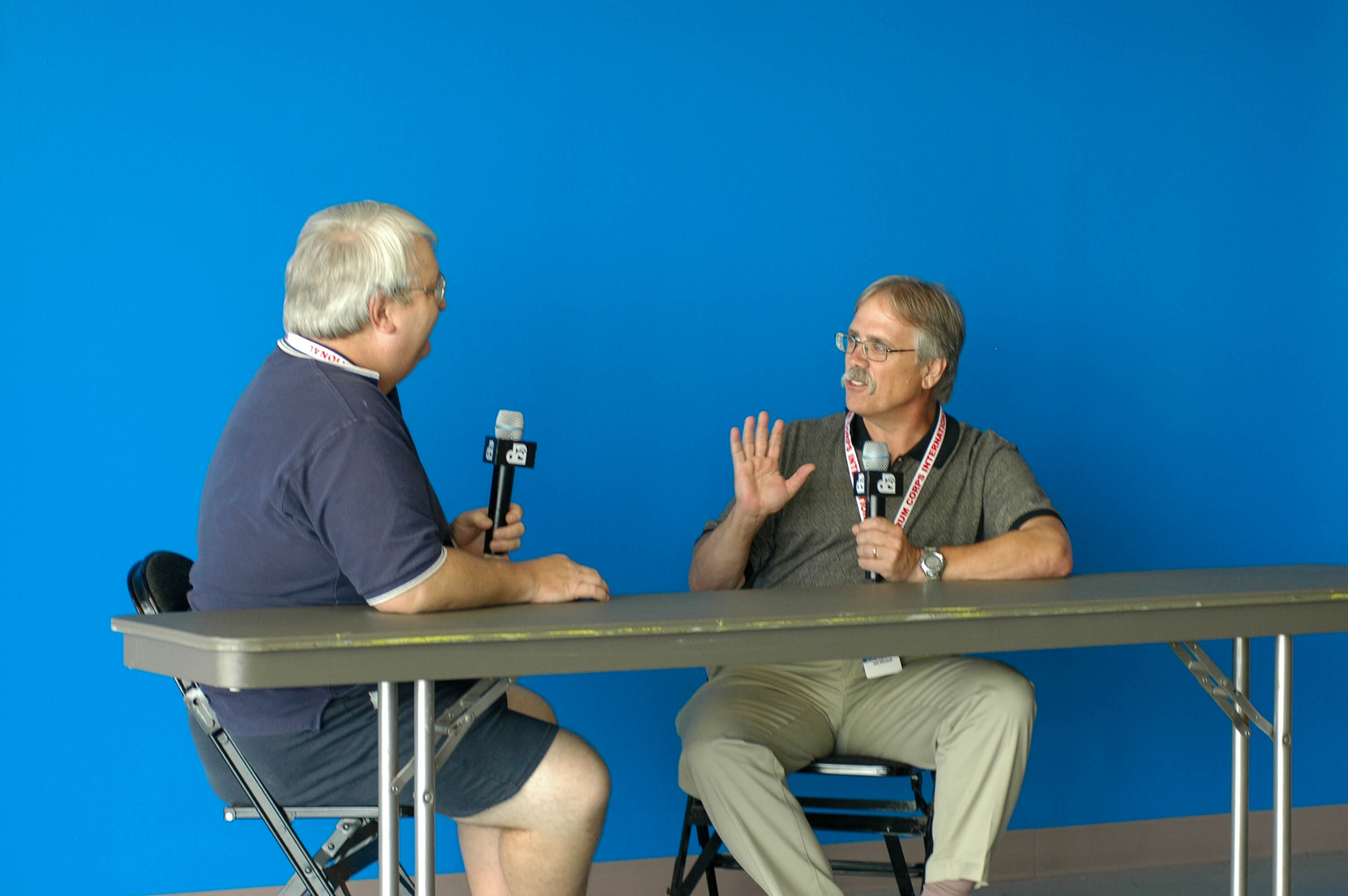 Boo does an on-camera interview on DCI judging during the 2008 DCI Southwestern Championship in San Antonio. 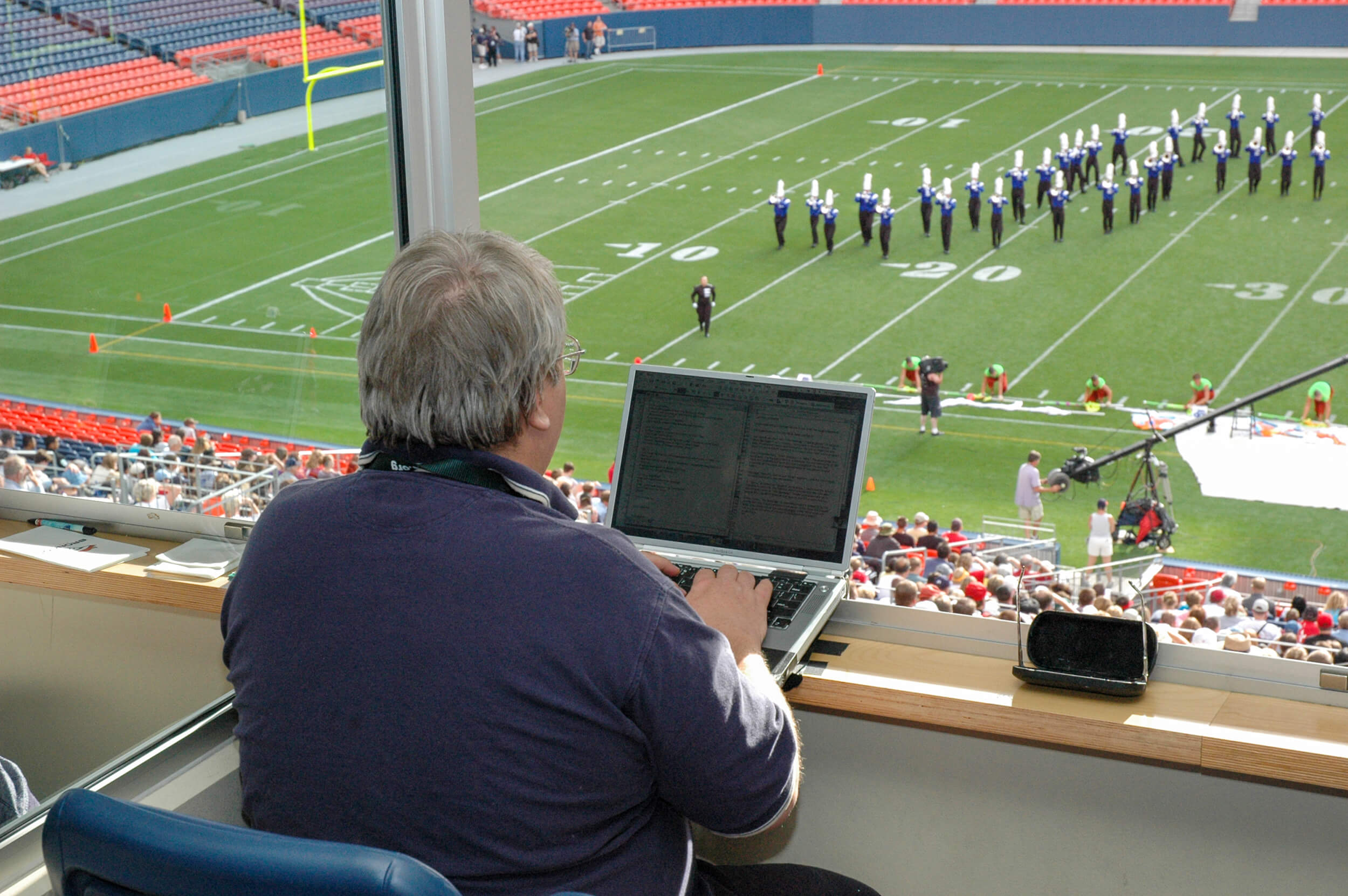 Boo works from the press box of Mile High Stadium during the 2004 DCI World Championships in Denver. 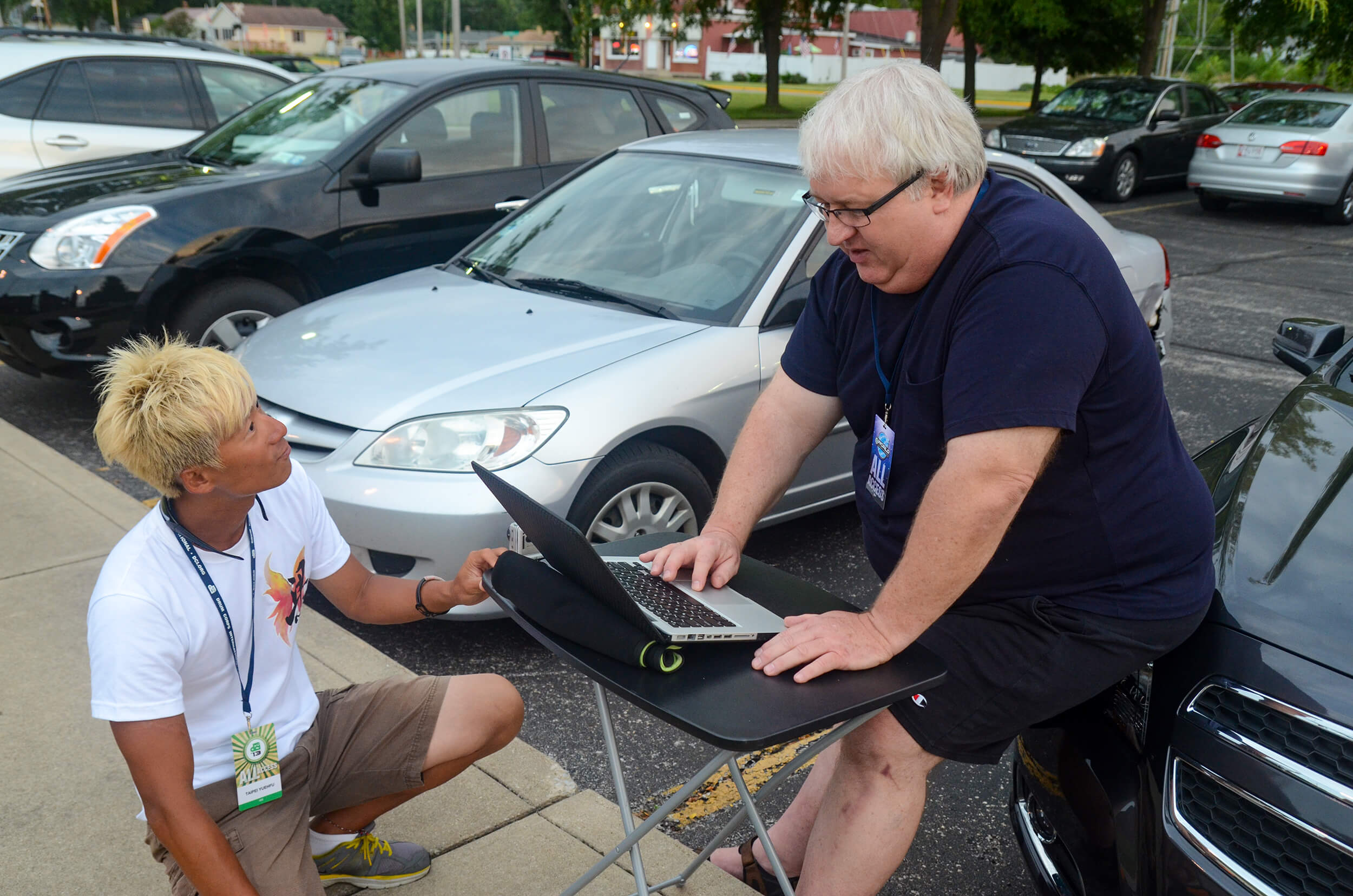 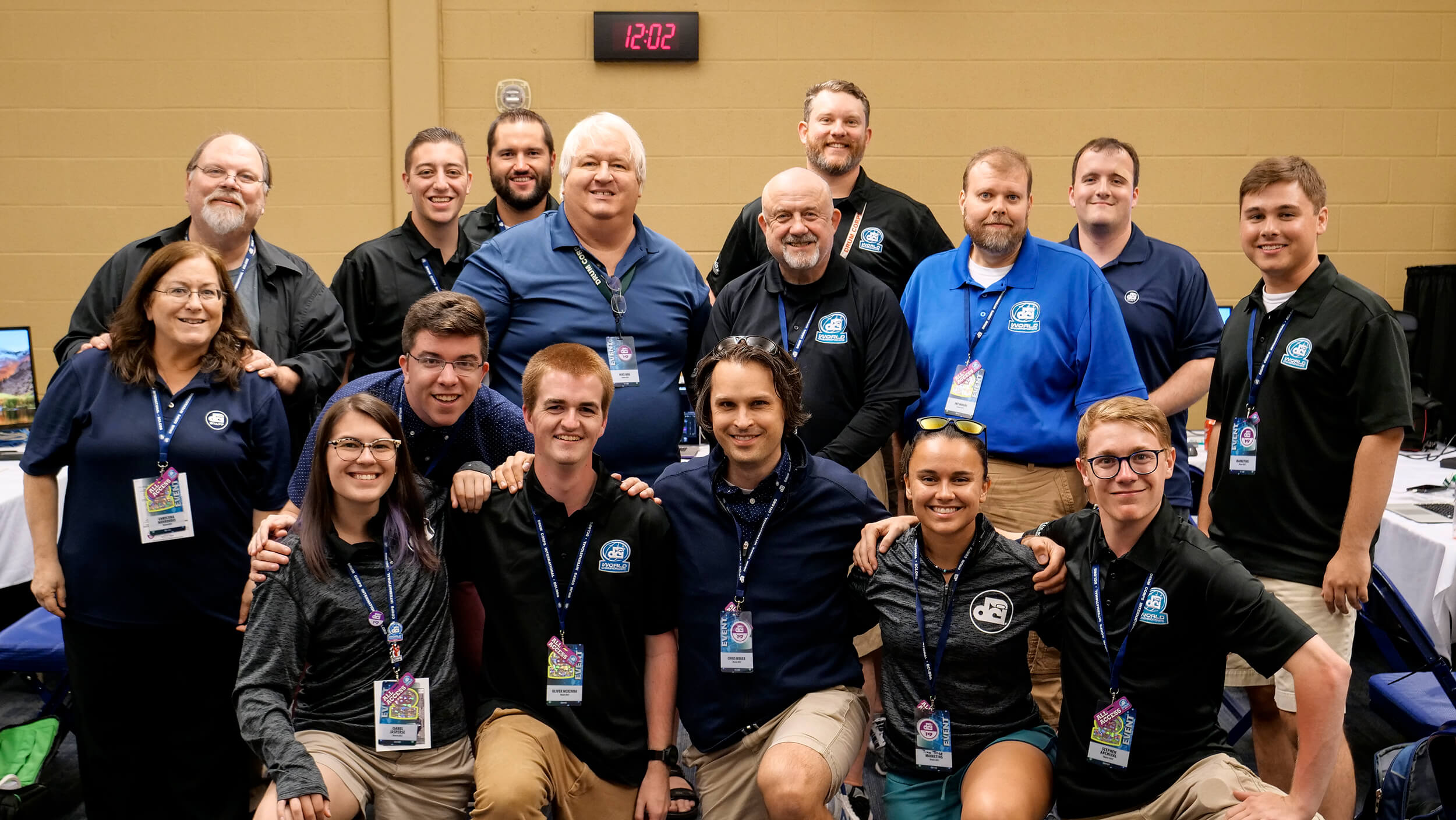 Affectionately dubbed by many as the “Pen of Pageantry” after working on projects for Drum Corps International, Winter Guard International and Bands of America for decades, there is perhaps no one who has amassed a bigger portfolio of writings about the breadth of the modern-day competitive marching arts than Michael Boo.

Originally hired in 1989 as a Drum Corps International staff writer to put together the corps program synopses for the organization’s annual souvenir yearbooks, Boo’s byline has been a fixture across DCI’s print publications and website ever since, credited to a diverse array of media including feature articles, CD and DVD liner notes, live play-by-play event blogs, podcast and video commentary, and more.

“I’ve always been in awe of the sheer amount of brain space Mike had for all things drum corps,” said DCI senior manager of communications Chris Weber who served as Boo’s editor on Drum Corps International projects for nearly 15 years. “He had such an ability to dance between the artistic side and the more sports-minded statistical side of the drum corps activity. He could compute the math on a judge’s scoresheet in his head while rattling off the liner notes for a Beethoven symphony, before telling you which corps performed it 25 years ago and then turning out 500 words on it a few minutes later.”

After a recent cancer diagnosis, Boo passed away November 18 in his hometown of Chesterton, Indiana. He was 65. 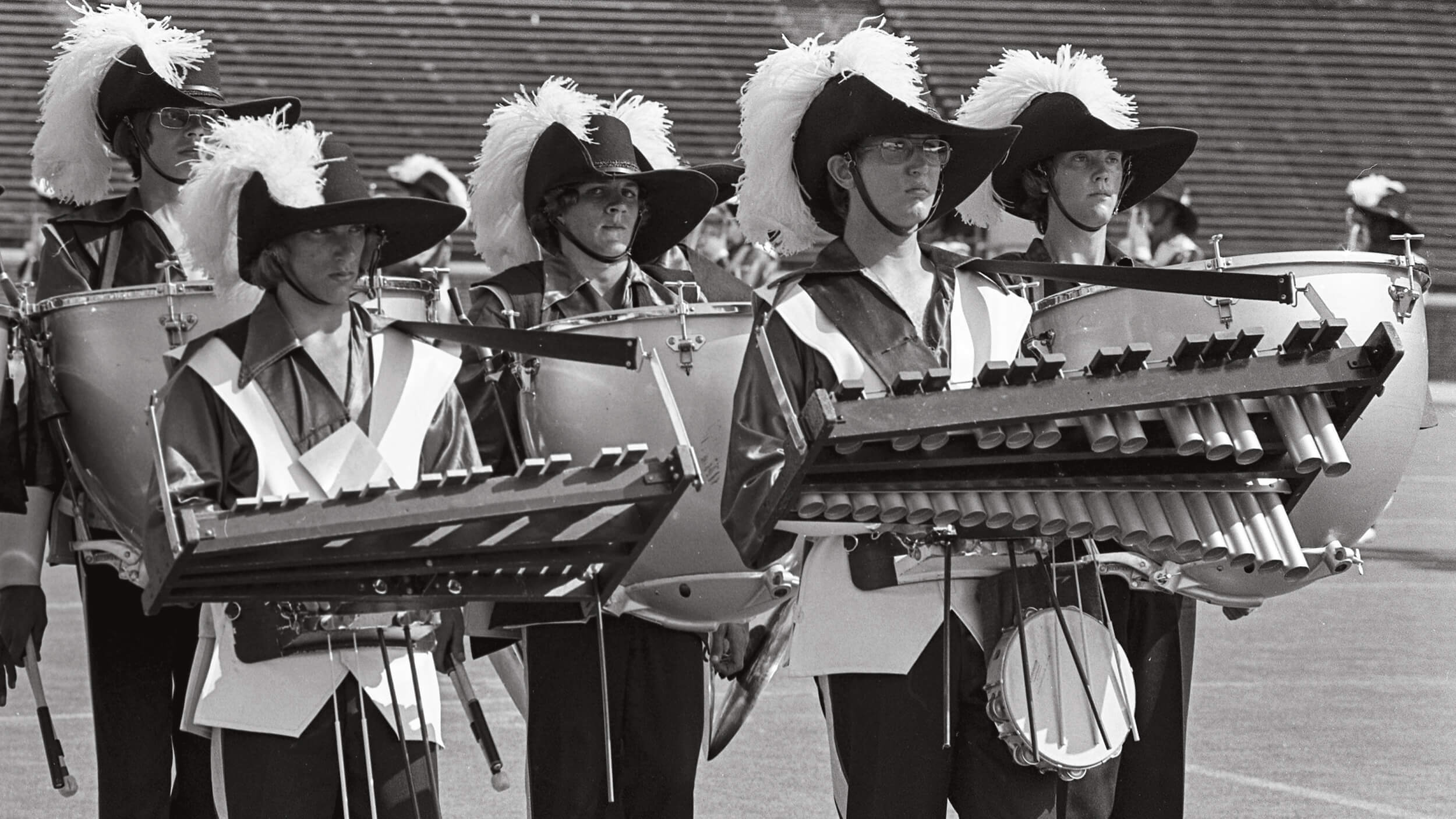 Boo (front right) performs with The Cavaliers in 1976.

Growing up in Steger, Illinois, Boo joined the Cavaliers Drum and Bugle Corps in 1975 as a brass player before switching to mallet percussion in 1976 and 1977. Pursuing undergraduate studies in music education at VanderCook College of Music in Chicago, Boo’s background was a bit of an oddity in the group whose membership at the time consisted of many who had little formal musical training prior to joining the corps. However, he quickly found a home and brotherhood there that would change the trajectory of his musical experience and instill his lifelong passion.

"Mike was my friend and Cavalier brother since we marched and aged out together in 1977,” Cavaliers board president Chris Hartowicz said. “I am not alone, however, in remembering the friendship, banter, wisdom, and kindness that Mike shared with thousands.”

With a passion for composing music, Boo pursued his master’s degree at Northern Illinois University in music composition and theory. Staying closely affiliated with his alma-mater corps, he had the opportunity in 1983 to compose the opening tune of the Cavaliers’ production, titled “Jade,” in honor of the group’s 35th anniversary.

Somewhat of a fluke opportunity, a last-minute repertoire change for which the current music arranger was unable to deliver a new piece in time gave Boo a shot at composing for the corps’ horn line.

“I was called and asked if I wanted to give it a try—three days before the (rehearsal) camp at which the piece was due,” Boo recounted in a DCI.org feature. “Having never written for bugles before, but the proud holder of a master's degree in composition, I went without sleep for a couple days and ‘Jade’ was the result. The piece was so successful that I haven't been asked to compose another piece for any corps since!”

Boo’s cheeky response is the perfect example of an ever-present sense of humor that while sometimes a little off-beat and head-scratchingly odd, regularly showed up in his writing and endeared him to colleagues and drum corps fans around the world. They provided a loyal following to recurring Boo-written features on DCI.org under the titles of “Fanfare,” “Spotlight of the Week,” and “Recap Roundup,” among many others.

Boo product review of weighted drum sticks: These steel drumsticks will turn your wimpy wrists into solid wrists of incalculable power, able to withstand hours of rudimentary warm-ups and capable of single-handedly knocking out roving bands of unsuspecting criminals. Practicing with these sticks will, over time, provide a drummer with wrist muscles sure to impress those who are impressed by such things. These are the Charles Atlas of drumsticks. These are sticks to be reckoned with. Do not taunt these sticks.

Boo on the 1989 Phantom Regiment: At this point, it seemed that the brass players had been instructed they could leave the field only once their lips were lying on the Astroturf of Kansas City's Arrowhead Stadium. Even though there were articulate segments in this closer, it was the unbridled bombast of this movement that cleared away any cobwebs that may have taken residence under the seats in the stadium's seating. To say the brass was loud would be an understatement. The horns were glorious…ripping a new hole in the ozone layer.

“One of the things I enjoyed most about Michael was his sense of humor,” said DCI Hall of Fame member and “Drum Corps World” newspaper publisher Steve Vickers who used to run a regular column written by Boo called “A Bit of Boo.”

“Another time he put a piece of graph paper on the floor, sprinkled some sand on it and did a soft-shoe routine,” Vickers said. “I was laughing so hard I fell off a chair.”

With an impromptu desk setup, Boo interviews a Kiwanis Kavaliers member at an event during the 2005 DCI Tour.

In his longevity in the position and in his role interviewing hundreds of DCI performers, staff members, show designers, and other personalities, Boo by default became one of the foremost experts on Drum Corps International history and served as a regularly-called-upon resource. This proved especially helpful when DCI released its “Legacy Collection” video series which brought performances from the 1970s through the 1990s to DVD for the very first time.

“Michael’s generosity reached to all parts of the DCI realm,” said Tom Blair, a DCI Hall of Fame member and longtime executive producer of DCI broadcasts. “I tapped his encyclopedic knowledge producing the Legacy series. He wrote the scripts for the ‘Perspective’ segments found on each DVD almost as fast as we recorded them.”

“In the years following he graciously shared his deep knowledge of the corps’ shows with our broadcast team each and every year,” Blair added. “No one loved drum corps more than Michael and few have done more to share it with the world.”

Outside the sphere of marching music 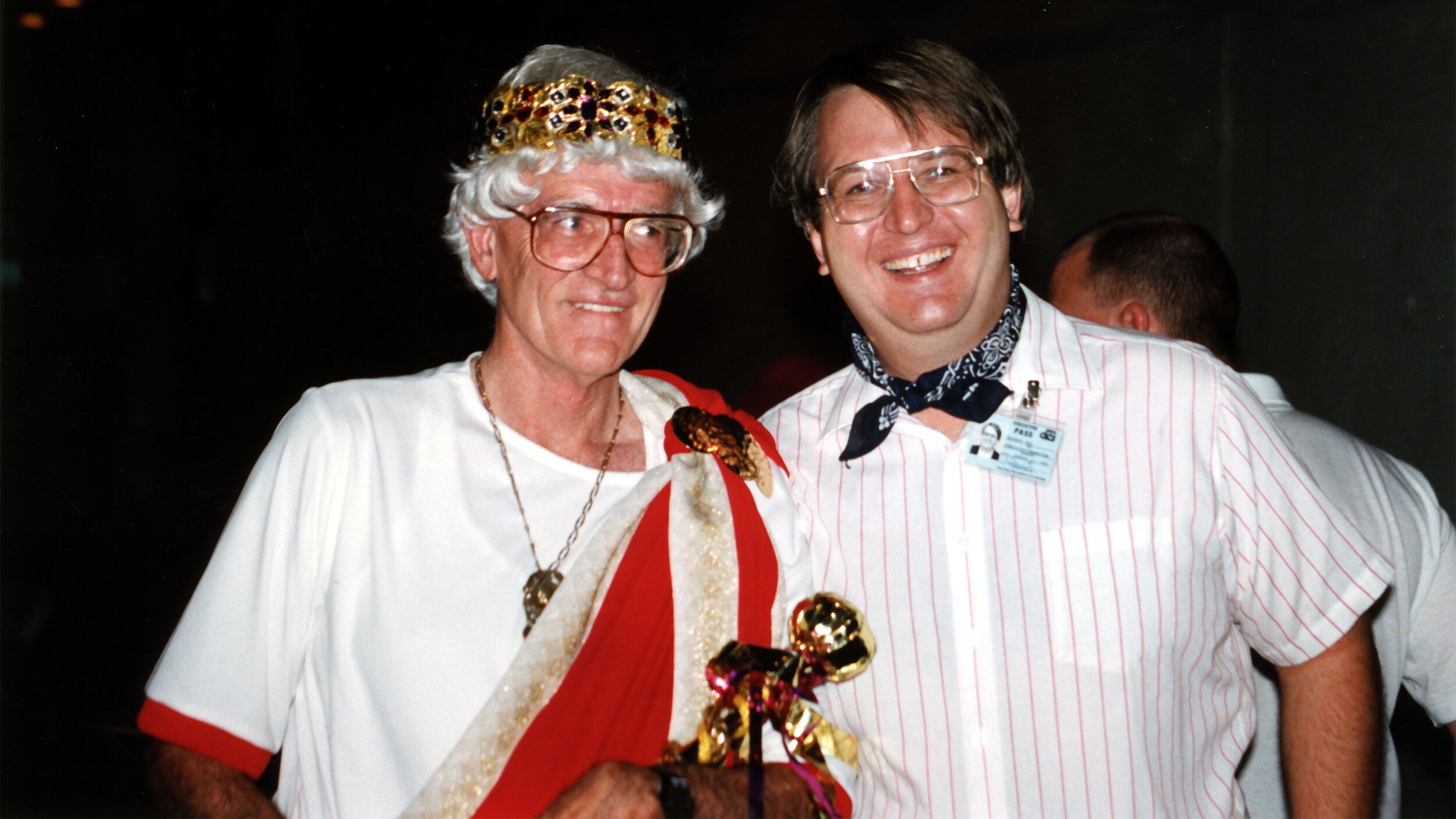 Boo enjoyed a friendship with Star of Indiana founder Bill Cook that extended beyond the drum corps activity.

Prior to devoting the majority of his time to Drum Corps International, Boo served as a writer for the magazine “American Skating World” and in 1998 published an honors-winning book on the history of figure skating.

Since 1997 Boo served as the executive corresponding secretary of the Our World-Underwater Scholarship Society. He had a passion for architecture, particularly Frank Lloyd Wright, and would often seek out Wright sites across the country to visit while traveling between DCI competitions.

In recent years Boo has written numerous compositions as composer in residence with the Windiana Professional Concert Band and Confucius Institute of Valparaiso University in Northwest Indiana. That group has premiered and performed his works in China, Malta, Australia, New Zealand and Italy. For the first time this year a number of Boo’s compositions were added to the catalog of Carl Fischer Music. He’s also been seen in the catalogs of Ludwig Music Publishing, Alfred Music, TRN Music Publisher and Grand Mesa Music.

“Michael was one of the most loyal, passionate and dedicated personalities I’ve ever had the pleasure of working with,” said Drum Corps International CEO Dan Acheson. “His thoughtful approach to telling the stories of the people and ensembles involved in the marching arts is second only to the size of his heart as a compassionate person who cared deeply about the success of the individuals and groups he observed and profiled.

“The value that he’s brought to our world will be forever remembered thanks to the abundant historical record that he’s left behind. The friendship that he brought to the lives of many will enable his spirit to live on as pleasant, cherished memories.”

Boo is preceded in death by his mother Maralyne and father Hilmer, and he is survived by his older brother Barry. No funeral services are planned at this time. Arrangements will be handled by Steger Memorial Chapel in Steger, Illinois.

In lieu of flowers, donations can be made in memory of Michael Boo to:

I'm proud of you, Dad

Spotlight of the Week: 2016 Carolina Crown

Drum corps tour for the rich and famous