For 1975, Drum Corps International corps members participated in the kickoff to the year-long celebration of the United States Bicentennial by gathering in Philadelphia, the city where members of the Continental Congress signed the Declaration of Independence almost 200 years prior.

The site for the World Championships was Franklin Field, the stadium for the University of Pennsylvania, which was founded by Declaration signer Ben Franklin.

Two new corps made the DCI World Championship Finals for the first time in 1975, Royal Crusaders and Garfield Cadets, the 20th and 21st corps to become finalists.

Despite only being DCI's fourth season, seven corps that had already been finalists (Kingsmen, Argonne Rebels, Des Plaines Vanguard, Bleu Raeders, Black Knights, Commodores and Purple Lancers) had already seen their last appearance in the Finals by the previous season.

In 1975, DeLaSalle Oaklands became Oakland Crusaders, 27th Lancers bounced into fourth place after a disastrous 20th-place season the year before, and Troopers squeaked into 12th place less than a point above both the Squires and the small-town Iowa Precisionnaires. Madison Scouts won every show except for the DCI Midwest Prelims and second-year finalist Blue Devils blasted into the top-three for the first time. It was also the first time that PBS stations broadcast the Finals competition live. 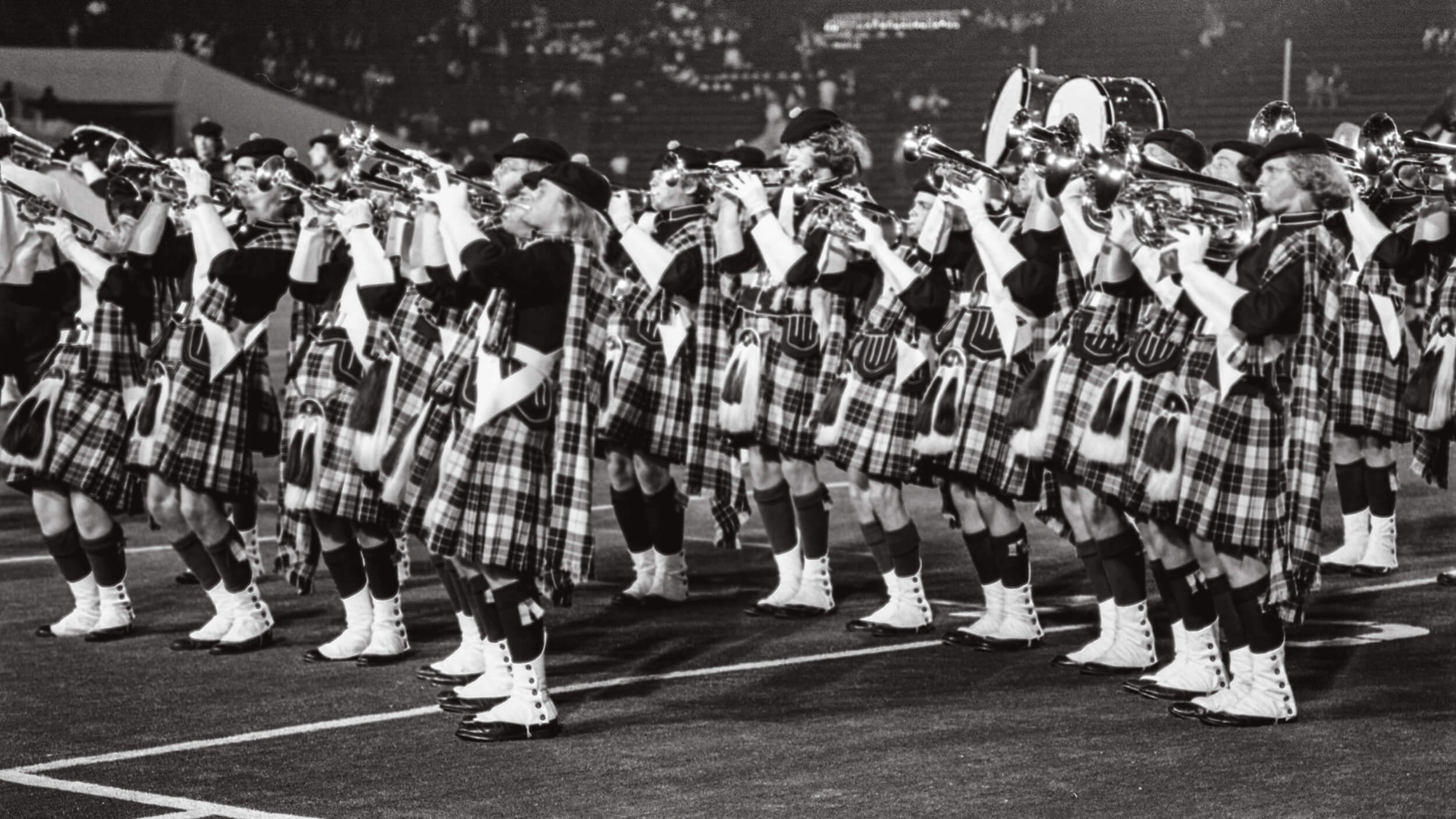 The source material has a decidedly Scottish feel to it, making it sound like something that could have been written especially for the all-male corps (the corps would turn coed three years later.), clad as they were in ankle-length kilts. In a late-piece interlude, the buglers re-created the drone of bagpipes as the tenor drummers twirled their sticks above their heads and the snares offered up some Highland rudimental licks.

Next came "O Fortuna" from Carl Orff's "Carmina Burana," the best-known selection from that famed choral and orchestral cantata. With the brass divided in two groups of three arcs on each side of the 50-yard line, the ending of the piece incorporated a short simultaneous stereo effect between the two sides that may very well be the first such treatment witnessed in drum corps.

Forming up for their concert standstill number, Kilties began with the opening of Ludwig van Beethoven's "Symphony No. 5," popularly known as the "Fate Knocks" motif. After 40 seconds of the piece played pretty much as Beethoven wrote it, the corps launched into Chuck Berry's "Roll Over Beethoven," the 1956 hit single that was remade by the Beatles in 1963. This was an old-fashioned blow-the-stands-down concert production, and the corps certainly fulfilled the requirement that such a piece be extremely loud.

Stevie Wonder's "Don't You Worry 'bout a Thing," from his 1973 album, "Innervisions," was one of the catchier "out-of-concert" productions of the mid-'70s, easy to hum when leaving the stadium. This led into a short drum solo of "The Irish Washerwoman," with the rifle bearers dancing an Irish jig.

The final piece, "Auld Lang Syne," was first performed by the Kilties in 1960 and showed up in the corps' productions 16 times throughout its history. It is based on the Robert Burns poem from 1788, the title of which translates into English as "so long ago." The Scottish folk song was sung at New Years in the British Isles centuries before Guy Lombardo popularized it in America by performing it at the stroke of midnight during his radio and television broadcast performances on New Year's Eve.

Few corps had a theme song that was as instantly identifiable with their corps as this piece. The arrangement by DCI Hall of Fame member Ken Norman is a certifiable drum corps classic, and has been played by members of dozens of different corps in all-star corps appearances at holiday parades throughout America.

Interestingly, Norman says he wrote the arrangement in a single half-hour burst of creativity. From that half-hour sprung a timeless work that not only says "Kilties," but also "drum corps."