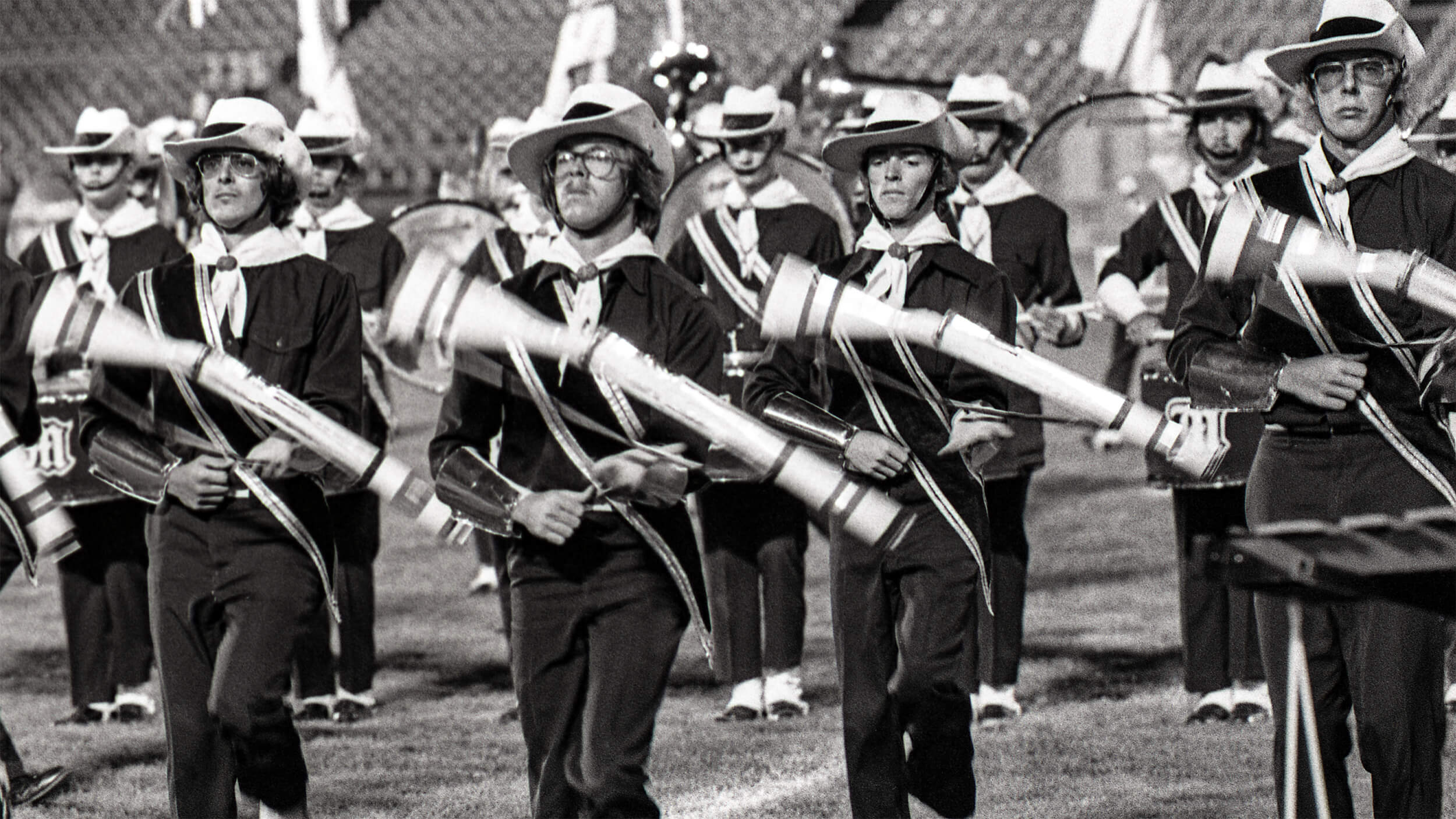 In 1977, for the first time in Drum Corps International history, two different stadiums hosted the World Championship Prelims and Finals competitions, with Prelims held at the University of Colorado’s Folsom Field in Boulder and Finals at Mile High Stadium in Denver.

Mile High Stadium has since been torn down, its former footprint unceremoniously serving as a parking lot for Denver’s present NFL stadium. The Finals competition was held on a Friday as the American Legion already had the stadium booked on Saturday for its drum corps national convention championship event.

Blue Devils won its second championship title in two years with a total general effect score just a tenth away from perfection. The corps had lost only one show all season, the Prelims contest at the DCI West regional in Boise, Idaho. The Devils placed only 0.35 points above Phantom Regiment in the Prelims in Boulder before opening the spread to 1.75 points in Finals.

Crossmen earned a top-12 spot in the Finals competition for the first time, but three-time finalist Oakland Crusaders slipped out by placing 15th in Prelims, despite the corps’ percussion section taking the top score in the Prelims. Due to a tie for 12th place in Prelims between Garfield Cadets and Kilties, 13 corps performed in Finals.

Watch the 1977 Madison Scouts on DVD

Songs from Leonard Bernstein Broadway musicals about New York City comprised the fifth-place show of Madison Scouts, including “New York, New York” from “On the Town” and selections from “West Side Story.” Focusing on the music, the Scouts chose to not literally convey the storylines from either musical.

The show started with rifles and flags on the field and percussion and brass behind the back sideline, as corps weren’t allowed to fully start on the field until the 1978 season. A powerful brass fanfare quote of the lyrics, “New York, New York, a wonderful town,” opened the production prior to the full corps proceeding onto the field. 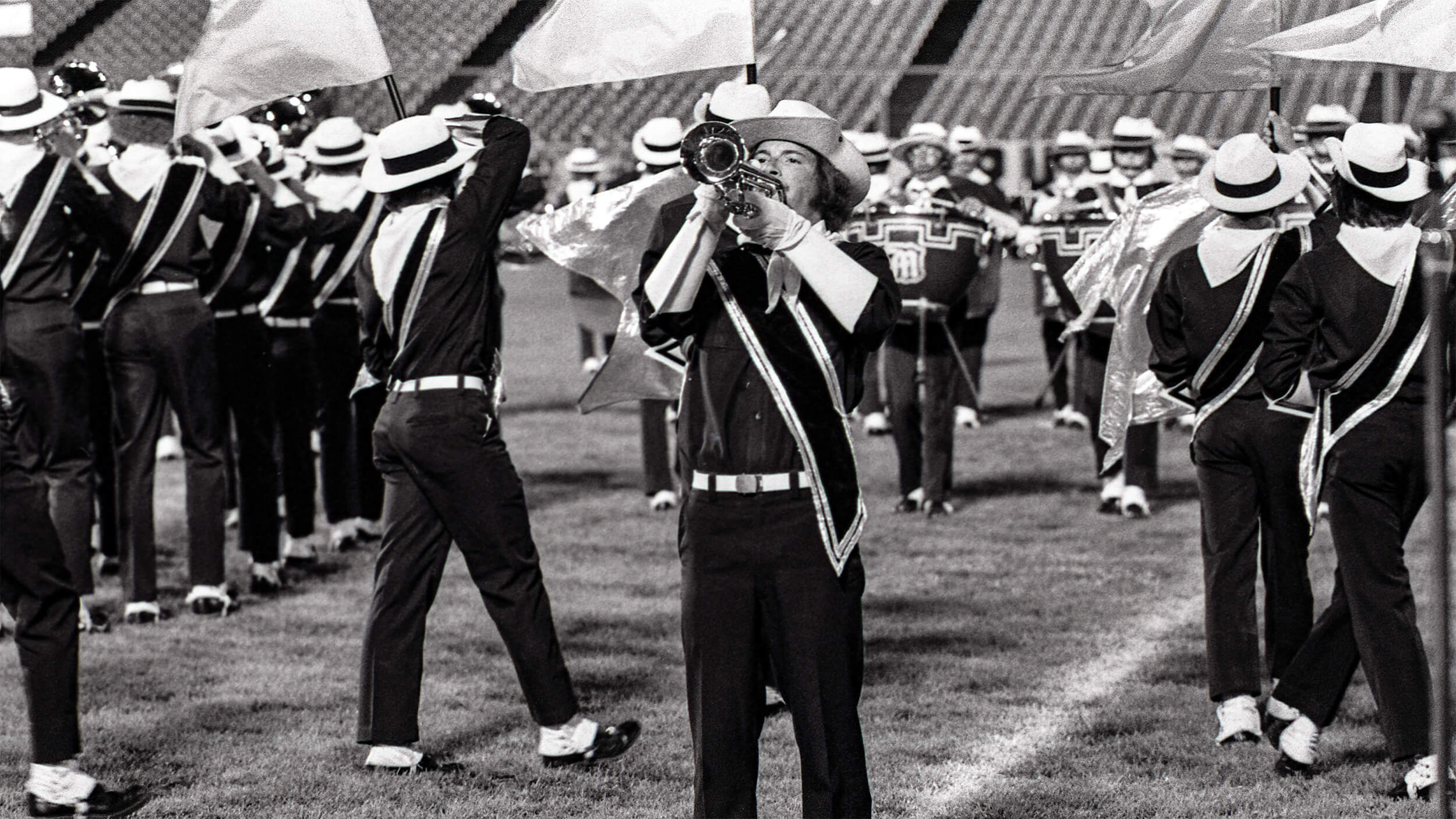 A series of variations on the melody filled the opener, mostly original ideas from future DCI Hall of Fame arranger Raymond Baumgardt, culminating with a powerful triangular wedge that pushed forward with great volume. The opener concluded with a drill form abstraction of the corps’ fleur-de-lis logo.

Selections from “West Side Story,” set in the 1950s in a neighborhood razed a few years later for the Lincoln Center arts complex, filled the rest of Scouts’ show.

A short fanfare of “Prologue” opened the multi-movement closing production, leading into a mostly standstill performance of “Cool,” performed at a far louder volume than the more laidback rendition heard in the musical. A little bit from the near end of “Something’s Coming” wrapped up “Cool,” substantially altered from the original to the point that one could easily miss its origins.

A set of four Remo Roto-toms accented the percussion solo of “America,” the drums carried around the neck since grounded front ensemble percussion sections didn’t yet exist during this time period.

The brass players returned with the humorous “Officer Krupke,” featuring the color guard letting loose with assorted lighthearted antics, including the rifle spinners crawling forward on their knees during the segment where the lyrics state, “Gee, Officer Krupke/We’re down on our knees.”

The tender ballad of “Somewhere” served as the show’s closer, accented visually with 10 double swing flags of multiple colors on one side of the poles and silver on the other side. The melody built to a loud volume, ending with a lone soprano bugler playing the opening four-note theme of “New York, New York” to tie the beginning of the show to the end.