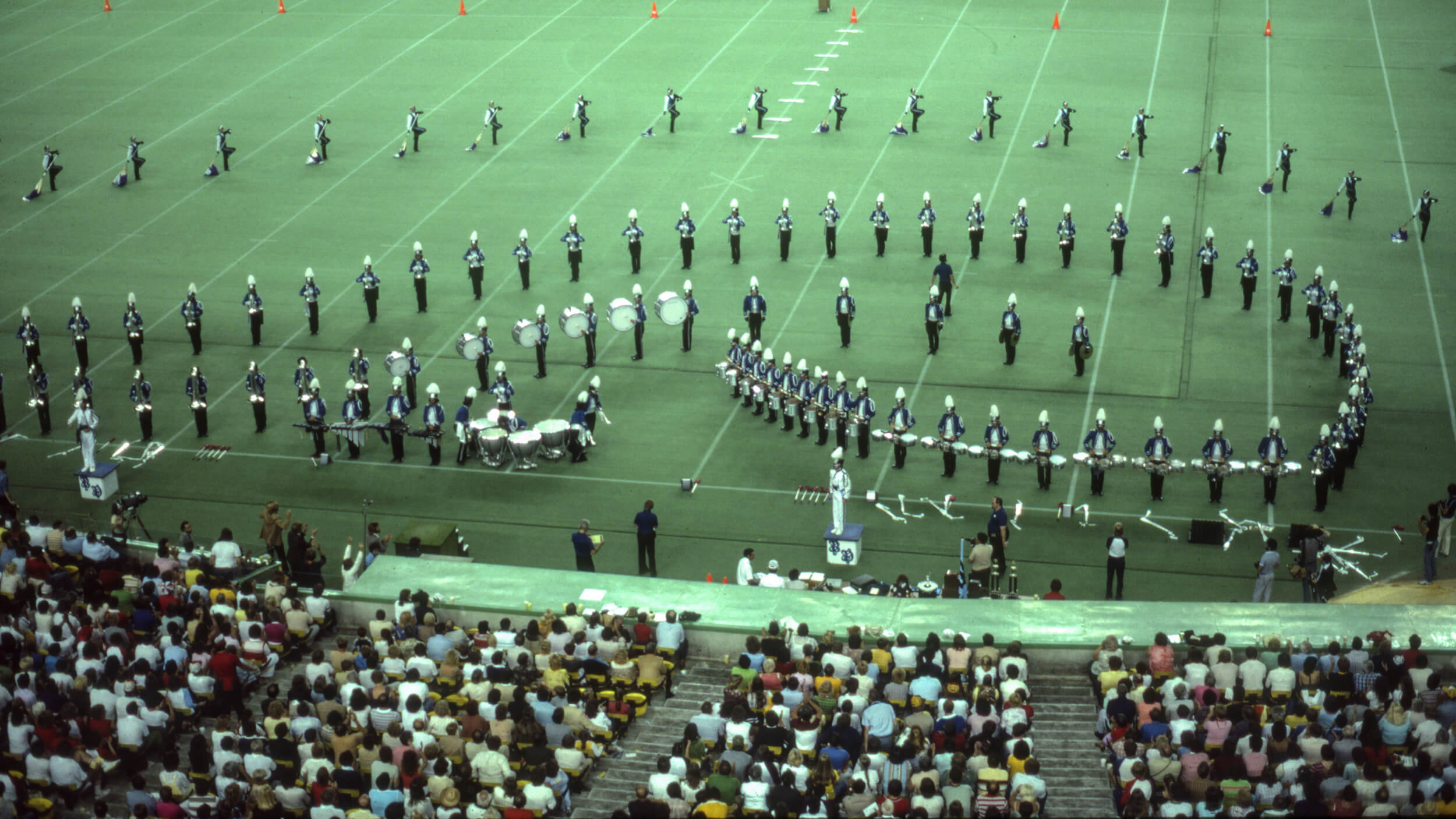 The 1981 Drum Corps International World Championship, the very first ever to be held outside of the United States at Montreal's Olympic Stadium, was to be the seventh year that PBS stations broadcasted the Championship.

Blue Devils took second at both Finals shows, under Madison Scouts in Whitewater and Santa Clara Vanguard in Montreal. Despite losing to Vanguard at the World Championships, the corps had beaten its Bay Area rivals in all nine meetings up through the Finals in Whitewater, and also won the Whitewater Prelims. 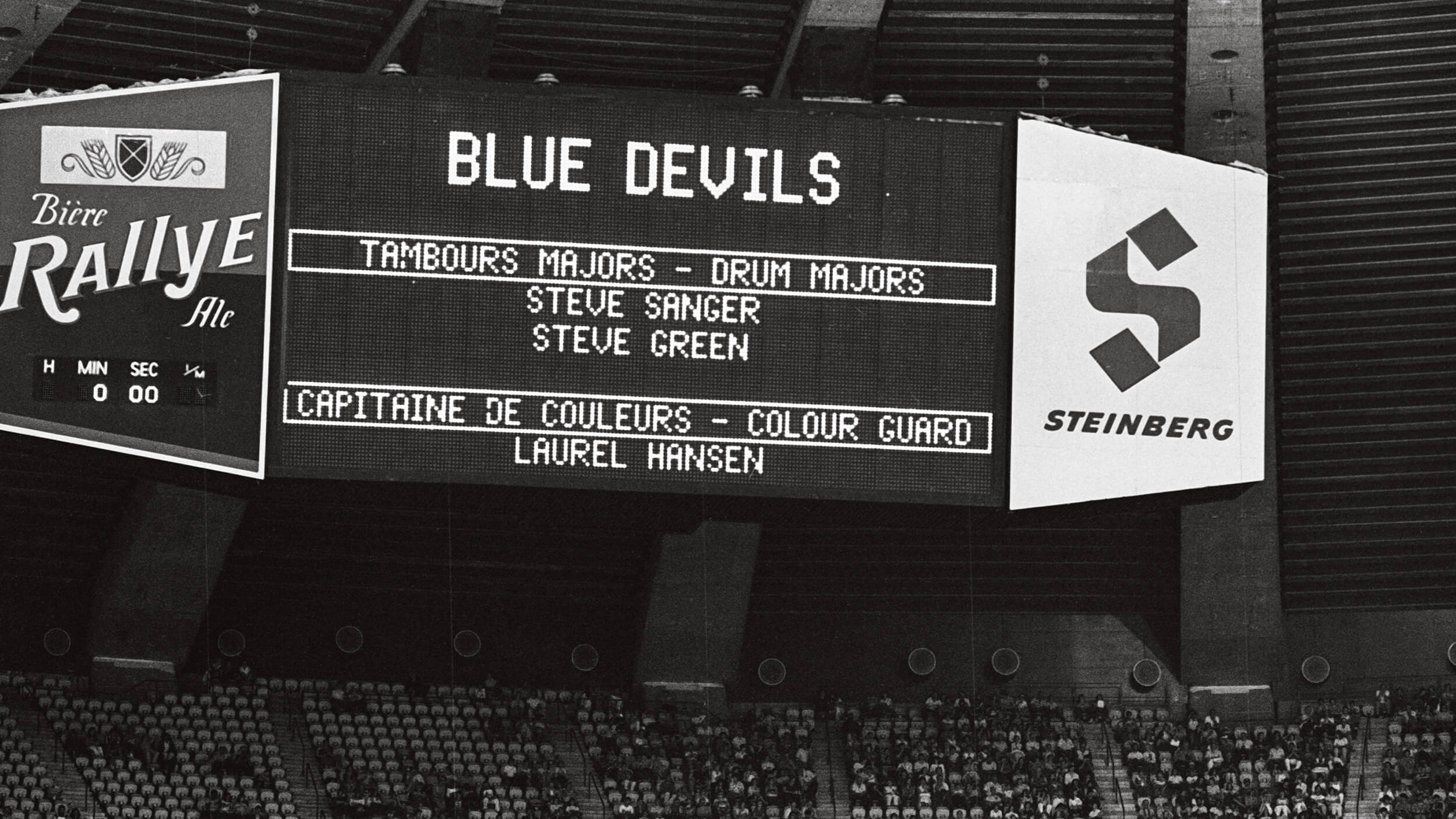 Visually, Blue Devils’ 1981 production started with the horn line in a company front against the front of the field, walloping the audience with the fanfare to DCI Hall of Fame arranger Wayne Downey's "New York Fantasy," which was how the corps also opened up its 1980 show. The fanfare was part of a larger work Downey wrote that only saw the light of day in his marching band arrangement for "State of the Art," his series for Jenson Music Publishing.

Also brought back from the corps' Championship season of 1980 was "Ya Gotta Try," written by Sammy Nestico, a famed jazz arranger and composer for some of the most successful big bands ever, including the Count Basie Orchestra.

The color guard for the first time adopted a sleek streamlined costume that allowed for easier execution of dance moves, leaving behind the traditional long skirts it wore through 1980. 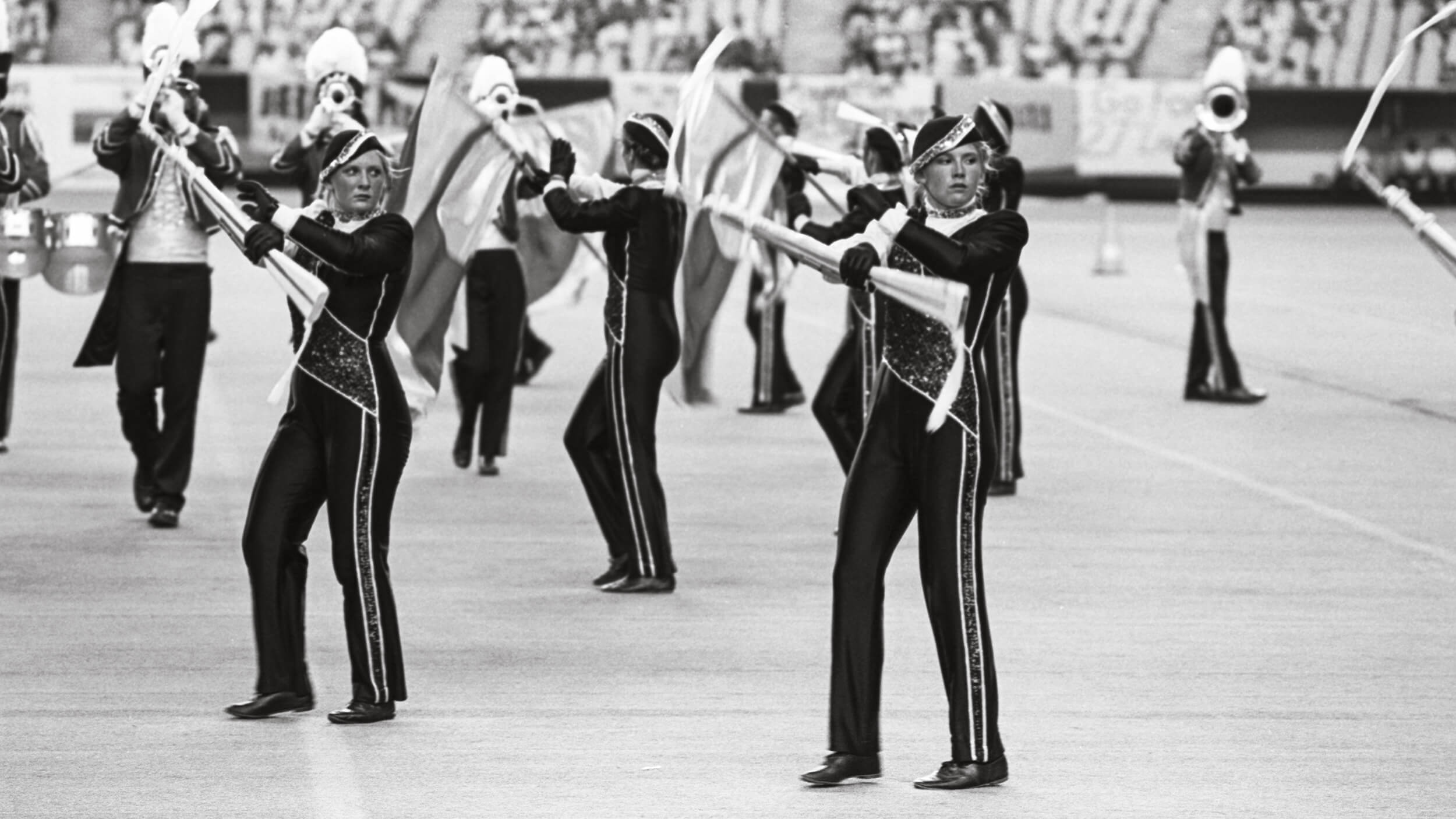 The percussion feature of this production was "La Danse du Bonheur," from Shakti's 1976 album, "A Handful of Beauty." Shakti grew out of the second incarnation of the Mahavishnu Orchestra, utilizing a heavy dollop of ethnic Indian percussion combined with jazz, which opened the door to what became known as World Fusion. The drums re-created the Indian percussion lines while the mallets played the violin part from the original.

During this feature, the brass players picked up a series of five-yard long purple banners stretched between two members, while the rifles had long silver metallic streamers on sticks that picked up on the silver in the silver and blue flags.

The Latin styled "One More Time, Chuck Corea," a tribute to Chuck Mangione and Chick Corea, (both jazz composers whose works were previously performed by the corps), was written by Gene Puerling for the a cappella Singers Unlimited, which he founded. Perhaps best known for his haunting rendition of "A Nightingale Sang in Berkeley Square" for the Manhattan Transfer, Puerling was at the cutting edge of overdubbing several parts in extremely close harmonies, making his arrangements for the four-voice ensemble sound as if a large massed ensemble was singing in perfect tune. 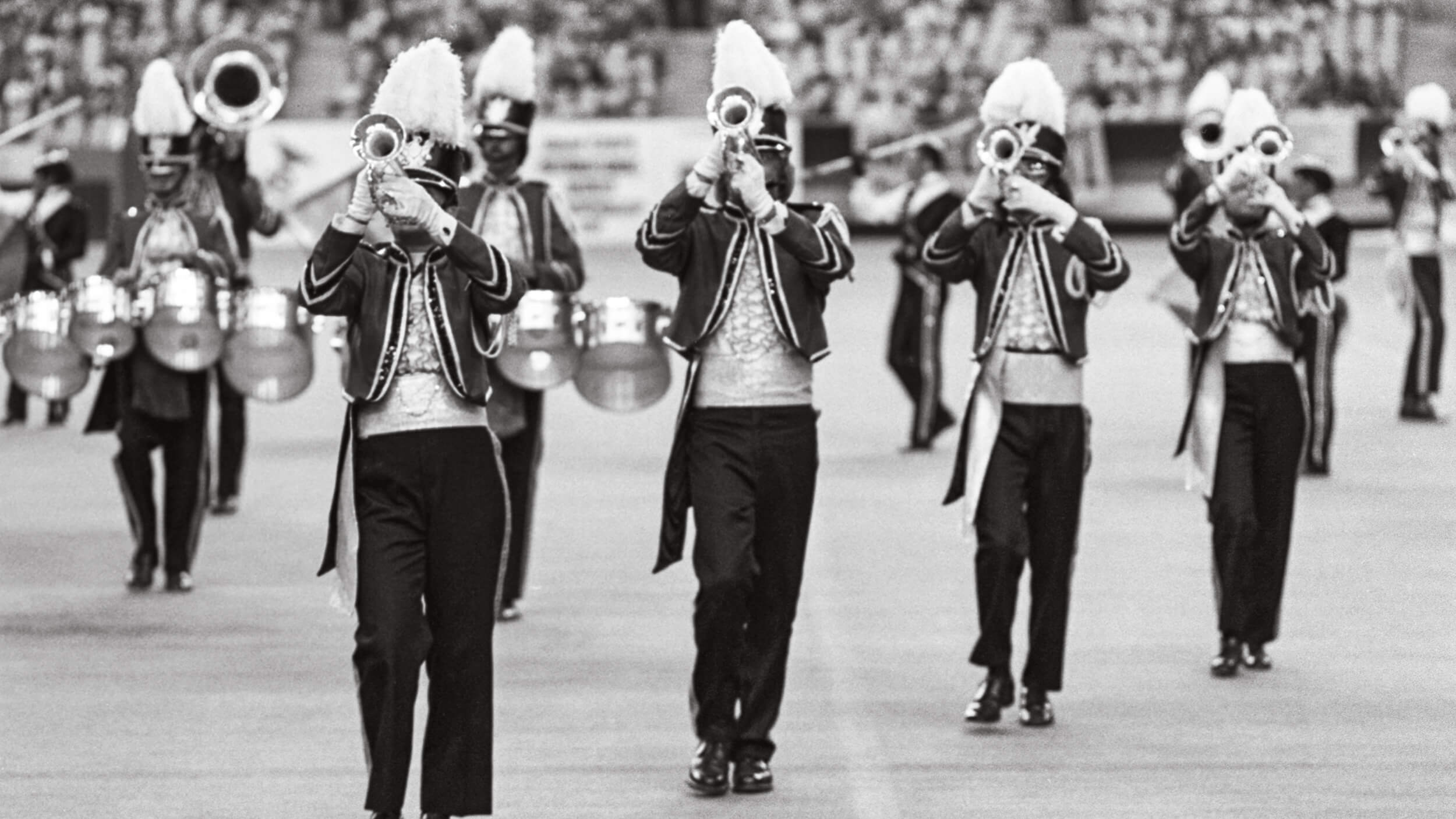 After an extremely haunting slow introduction, the work kicked into overdrive, visually with color guard members performing with long red rhythmic gymnastic ribbons. In this piece, audience members saw an increased amount of drill formations during a corps' concert production section of the show, which for many corps was still primarily performed at a standstill.

Next the corps performed "Johnny One Note" from the 1937 musical "Babes in Arms" by Richard Rodgers and Lorenz Hart, made more famous by Judy Garland in a movie of the same name two years later. This work demonstrated that the brass section was equally adept in any style.

"Dindi" by Antonio Carlos Jobim, with lyrics by Aloysio de Oliveria and further English lyrics by Ray Gilbert, also returned from the corps' 1980 show. The mellow Latin song was named after Brazilian singer Sylvia Telles, whose nickname was Dindi. The piece enjoyed wide commercial success, being recorded by a large number of famous singers from Frank Sinatra to Ella Fitzgerald. 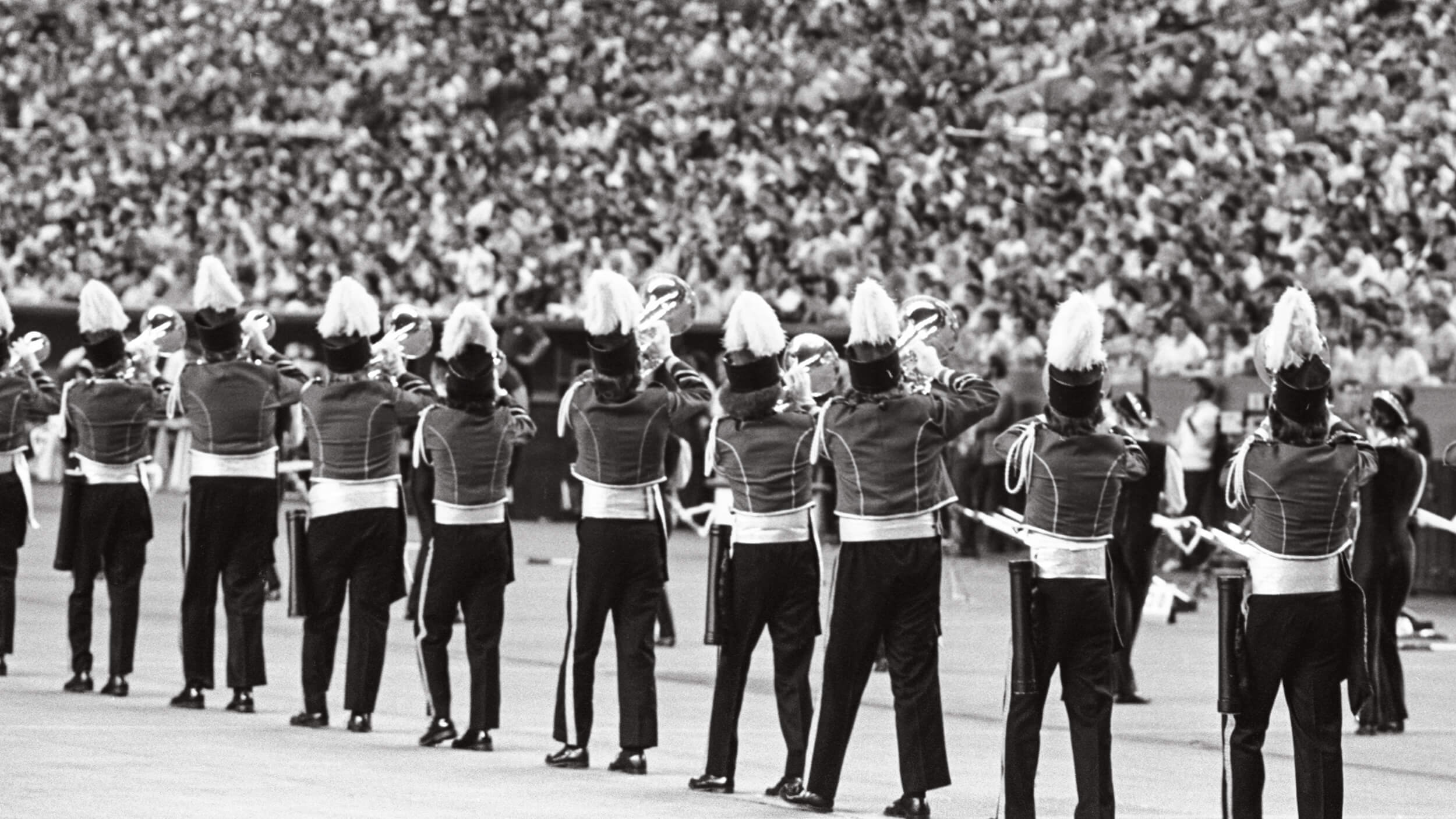 The work led to the brass players pivoting in their trademark two echelons into a company front, but in reverse. Instead of opening up a giant "V" from a single line of horns down the 50-yard line, this maneuver had the horns close in from 40 yards apart.

A return of a few notes of the melody of "New York Fantasy," accompanied by red rhythmic gymnastic ribbons and some upper altitude soprano high notes brought the show to a screaming conclusion.

A ninth-place finish in the percussion caption—a full two points under the winning Bridgemen line and 1.60 under the Vanguard—prevented the corps from earning its fifth World Championship title by just three tenths of a point. Rarely has a single caption had as profound an impact in pulling a corps off the winner's podium. Yet, overall, this was a show worth remembering for its sheer energy and color guard innovation.