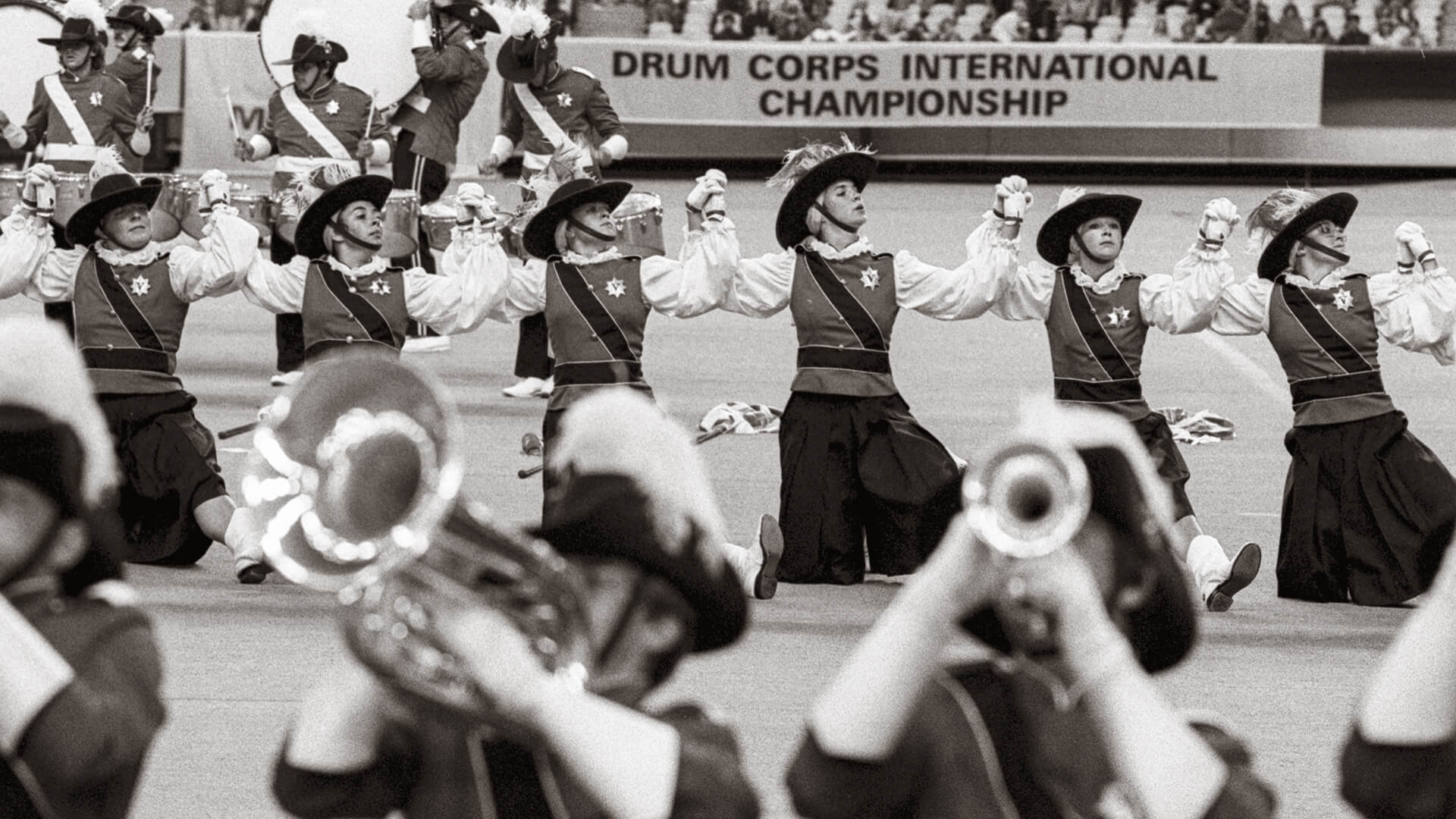 Montreal, Quebec hosted the 1982 Drum Corps International World Championships for the second consecutive year, with Prelims held at McGill University’s Molson Stadium and Finals held at the massive Olympic Stadium that was constructed for the Summer Olympics six years earlier.

In winning the Finals competition, Blue Devils achieved the first undefeated season in DCI history. Garfield Cadets finished among the top-three corps for the first time ever, one year prior to winning the title for the first time. Other firsts included the Sky Ryders making it into the top 12 and all corps scoring over 80 points in Finals.

In 1981, the corps performances in Olympic Stadium were affected by a high level of echo created by sound getting trapped under the venue’s massive concrete overhang over the audience. For 1982, much of that problem was remedied with the performance field being moved back several yards.

Ultimately ending in second place, Santa Clara Vanguard came into the event as the defending DCI Champions. For the first of two years the corps performed the “Finale” from Vittorio Giannini’s “Symphony No. 3,” originally composed in 1958 for concert band. The corps erupted off-the-starting-line with the movement’s rapid descending brass scale that was handed down from one section to another in a seamless flow, as if one section of the brass was playing the scalar runs all by themselves.

Nicolai Rimsky-Korsakov wrote “Capriccio Espagnole” in 1887, inspired by Spanish folk melodies. Near the beginning, during the introduction of the fourth movement, “Scene and Gypsy Dance,” the corps moved into the familiar form of the Vanguard shield. This was followed by the quick “Alborada,” a festive dance originating as a celebration of the rising of the sun. After a brief introduction by the brass section, the percussion took over with a reprise of the gypsy dance.

The horn players unraveled banners, purple on one side and white on the other, each suspended between two members. The selection ended with movement five, “Fandango asturiano,” a dance from northern Spain, finishing off with a powerful restatement of the “Alborada” theme. 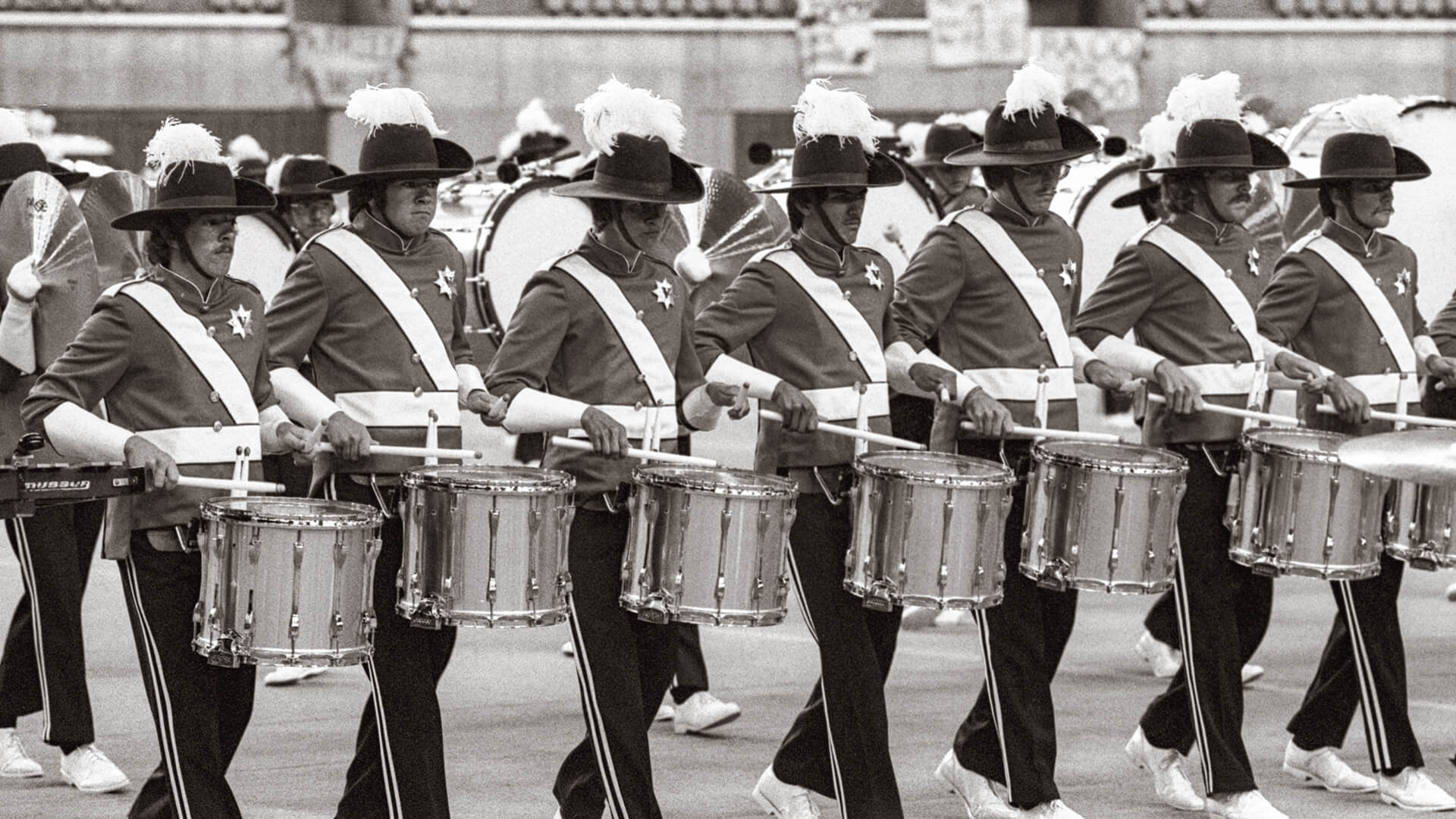 Next, Vanguard brought back Leonard Bernstein’s “Slava!” from the corps’ 1981 Championship show, composed for Russian cellist Mstislav (Slava) Rostropovich’s inaugural season of conducting the National Symphony Orchestra in 1977. The two themes of the piece, in 7/4- and a much faster 7/7-time signature, were lifted from Bernstein’s “1600 Pennsylvania Avenue,” which in 1976 closed on Broadway after just seven performances.

This standstill portion of this part of the corps’ production started with a ratchet sound as the bent-over-performers sprang back to life as if being freshly wound up. The whole performance of the piece was based on impishness, with quite a bit of clowning around from soloists and a color guard section that utilized pink and white hoops.

Vanguard followed with Aaron Copland’s “Appalachian Spring,” which was premiered in 1944 as “Ballet for Martha,” written for a chamber orchestra to accompany a ballet created and danced by famed choreographer Martha Graham.

The corps, which had played longer renditions of the work in both 1976 and 1977, started the 1982 version at Copland’s first introduction of the “Simple Gifts” theme, which Copland notated as being calm and flowing. On the field, this led into the coda of the work, which quickly transitioned into the loud grand finale statement and the subsequent prayer-like chorale, with the corps facing backfield to end the piece subtlety and quietly.

Then, a rousing recap of the main theme to “Capriccio Espagnole” returned to end the show, or so the audience thought.

The surprise closing tag, not witnessed until the World Championship Finals, was “Bottle Dance” from Jerry Bock and Sheldon Harnick’s “Fiddler on the Roof,” the 1964 musical that was the first Broadway production to surpass 3,000 performances. The corps had played something from the musical eight times between 1970 and 1979, with the corps’ iconic visual treatment of “Bottle Dance” introduced in 1974 and repeated three times prior to 1982.

Audience members didn’t know the new ending was going to occur because the corps learned it secretly at a remote facility. So, when the brass players knelt down at the front sideline and the color guard performers all gathered toward the center of the field to descend to their knees forward of the drum line, the audience erupted in such a loud commotion that the horns couldn’t hear themselves side-to-side. Each side finished apart from the other which many fans didn’t even realize in the commotion until they received their recordings on LP vinyl record months later.