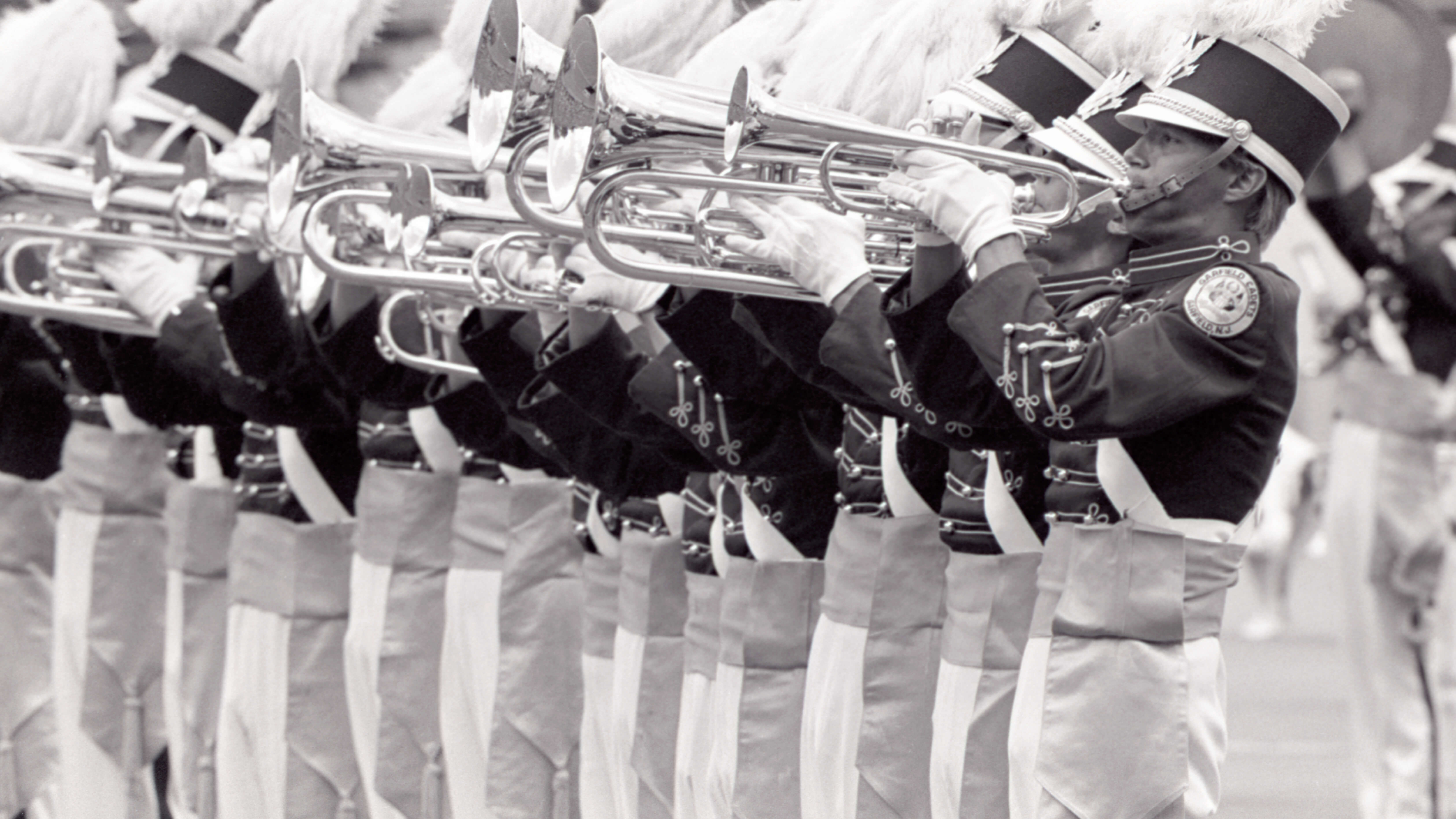 The Drum Corps International World Championships returned to Montreal for the second year in 1982, with the Prelims competition held at McGill University’s Molson Stadium and Finals held at Olympic Stadium.

The Blue Devils became DCI’s first corps to make it through a season undefeated. The second-place Santa Clara Vanguard surprised all by pulling out its iconic “Bottle Dance” in Finals, the resulting din from the audience causing the corps to not finish together in the chilly 41-degree Fahrenheit weather.

The corps opened the show with a short quote from the Andante con moto (in slow tempo – walking speed, with movement) theme of George Gershwin’s “Concerto in F,” written in 1925 for piano and orchestra.

Watch the 1982 Garfield Cadets on DVD

The somewhat reserved introduction to the show turned 180 degrees with Ron Nelson’s concert band work, “Rocky Point Holiday.” Nelson wrote the work in 1969 during a family vacation to Rocky Point, a seaside resort in Warwick, Rhode Island. Now a state park, the locale was home to an amusement park until 1985, the thrill rides inspiring the work’s unrelenting forward momentum.

During this selection, fans got a small taste of the concepts being developed by DCI Hall of Fame drill designer George Zingali, a style that would fully blossom two years later during the corps’ radical “West Side Story” show. Zingali was known to play around with droplets of water and the type of small-link chains attached to pens at bank teller windows, translating the elastic movements to drill paper. 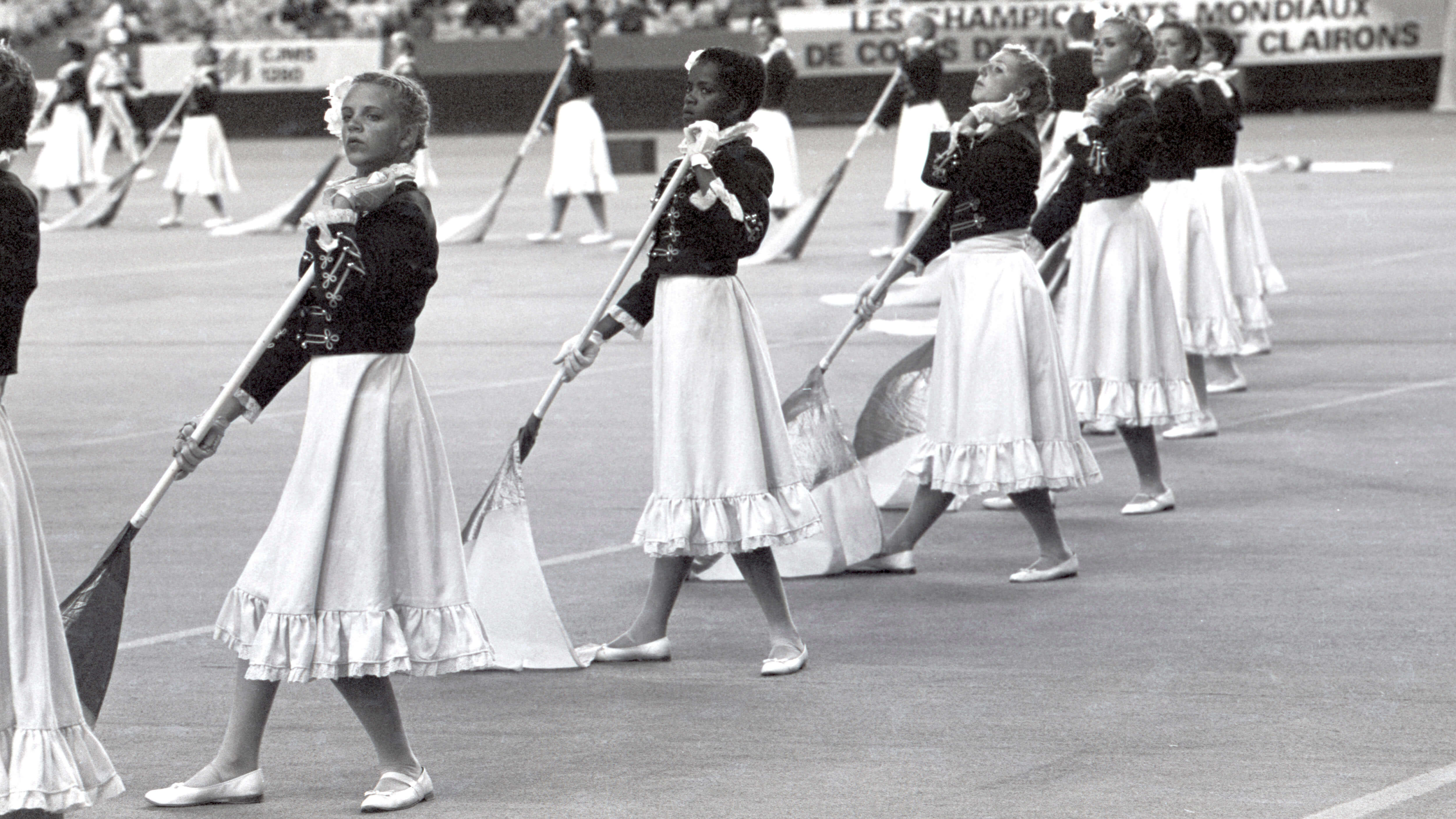 DCI Hall of Fame member Michael Cesario, who served as program coordinator on the corps’ design staff, recounts some of the other visual elements that made the corps unique.

“The look of the color guard set us apart in 1982,” Cesario said. “Shirlee Dorritie had just done the jumpsuit/fashion look with Blue Devils, and many corps jumped on that bandwagon. We went in the opposite direction with long prairie dresses and ruffled tops for a balletic look that fulfilled my brother Greg’s vision of a guard based on femininity and not military marching.

“The shocking thing was the lack of headwear. With the guard members wearing their hair up in inverted French braids with a white rose on the side, several judges tried to give us penalties for having no headgear, despite that rule disappearing with the VFW and American Legion rules. Some were taken aback by the lack of military bearing, but it gave the corps a completely different flavor and it was the basis for all of the corps’ [1983-1985 Championship-winning] looks.”

In the Finals competition, the corps’ performance of Gershwin’s “Cuban Overture” was presented exactly 50 years from the week that witnessed the premiere of the work at an outdoor all-Gershwin concert in New York City. Earlier in 1932, Gershwin traveled to Cuba and fell in love with the island’s music, bringing back with him several ethnic percussion instruments that were rarely seen in the United States at the time.

Garfield’s rendition, chock full of fast brass passages, was even more propulsive than “Rocky Point Holiday,” with performers in the front ensemble “pit” playing many of the hand percussion instruments that were so novel in the America of Gershwin’s day.

The Cadets returned to the subtle blues of the Andante con moto movement that provided the show’s first notes, with the color guard members swinging triangular banners of graduated blue with a tinge of white at the tips that provided a wispy trail in the air. Building to an advancing company front, the music jumped to the very end of the concerto for a loud and dynamic conclusion.

A year later, the corps earned its first of three consecutive titles, becoming the first corps from the east to be crowned DCI Champion.