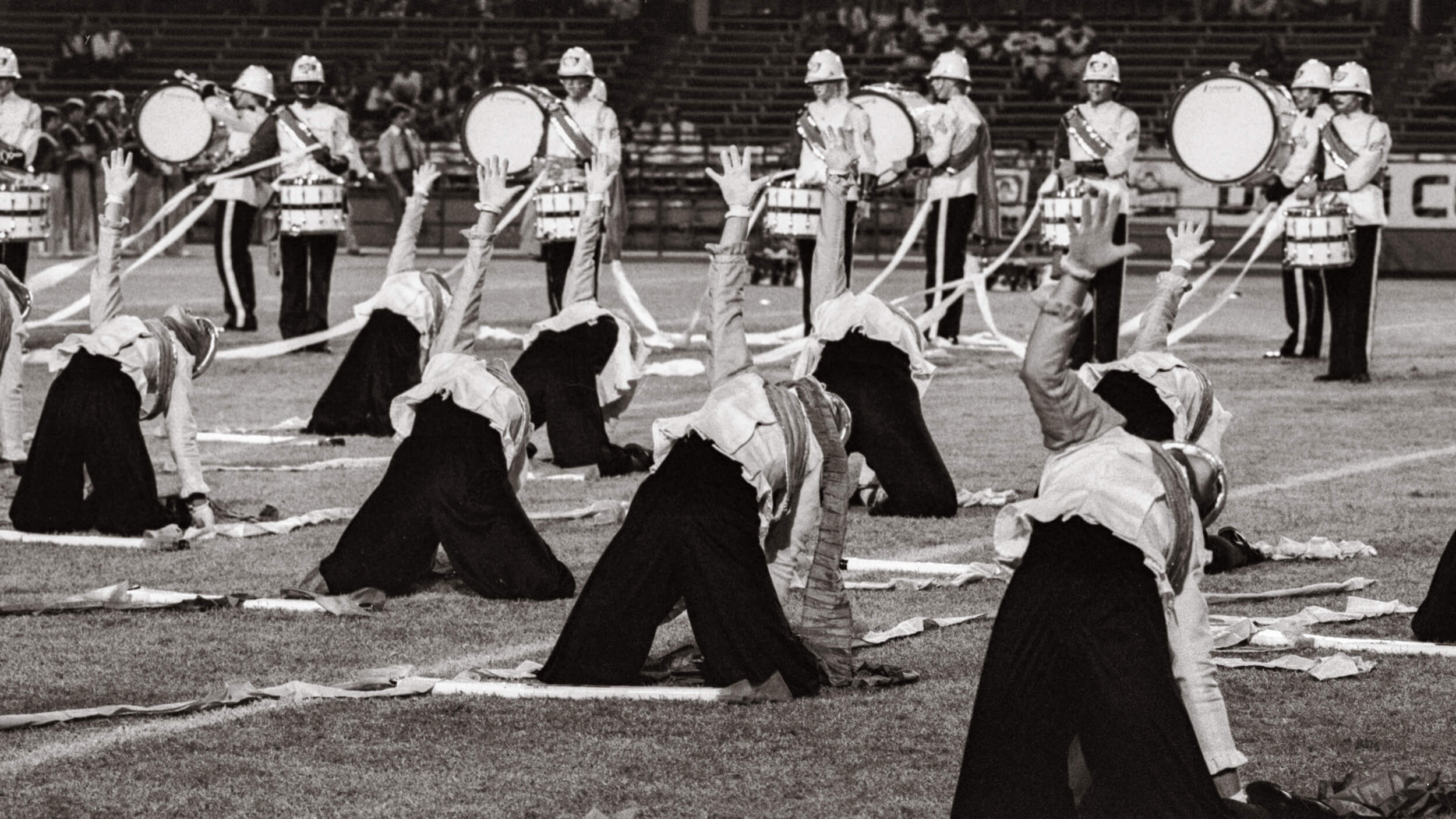 Also, for the first time, Suncoast Sound made the Finals and the Garfield Cadets won the title, the first eastern corps to do so.

A couple records were set that year, with Bridgemen making Finals after scoring 47.15 earlier in the season, and a 20.65 spread between first and 12th places is the greatest in DCI history.

The Cadets' show, though not the first one Hall of Fame visual designer George Zingali wrote for the corps, was the first production to highlight his concept of "flex-drill," which forever changed the art of drill writing. The second-place Blue Devils featured an electrifying high-note soloist in a Maynard Ferguson hit and Santa Clara Vanguard did the unthinkable by ending their show quietly with the last strains of "Appalachian Spring." 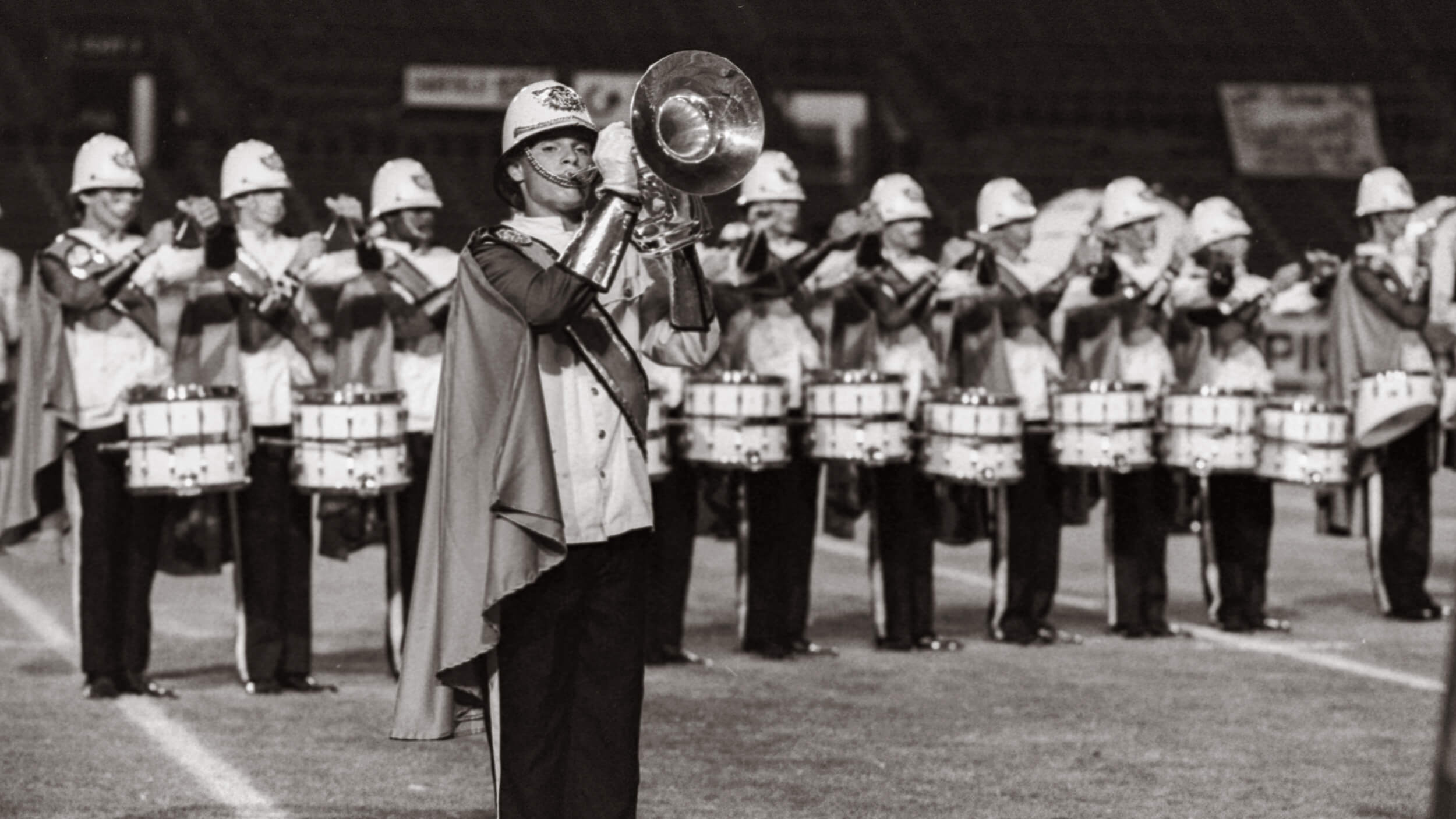 Phantom Regiment's entire fourth-place 1983 production featured music by Russian Romantic composer Peter Ilyich Tchaikovsky. The opening medley started with a short-but-huge standstill fanfare, based on the opening from "Serenade for Strings," but much, much louder than Tchaikovsky could have ever imagined it.

Watch the 1983 Phantom Regiment on DVD

In reference to the work originally written for strings, the color guard members caught their spinning flag poles and briefly treated them as violin bows. Right after that, the long, flowing red capes on the brass players were treated as visual shields to suddenly change the color scheme on the field.

"1812 Overture" made its way into the opener before transitioning to a drum solo based on the "Finale" from "Serenade for Strings." This allowed the audience to get a closer look at the split-shell snare drums that featured a couple-inch gap between the top and bottom of the shells, which back then was considered to help in acoustic projection. A return to the opening fanfare was combined with a short quote from the composer's "Symphony No. 6" to bring the combination drum feature/horn reprise to a close.

Many fans may have forgotten that the whimsical concert standstill of "Neapolitan Dance" from "Swan Lake Ballet" featured a juggler, four years before the featured professional in Star of Indiana's 1987 circus show.

The closer was a full-blown five-and-a-half minute production of "1812 Overture," which was written by Tchaikovsky in 1880 to celebrate the Russian nation overcoming Napoleon's assault by the undefeated French Allied Army. (Though Napoleon's forces "won" the battle, they exited Russia with only about 10 percent of the forces with which they arrived.) Tchaikovsky also conducted the work during the dedication of Carnegie Hall in 1891.

The piece commenced, as did the original, with a solemn chorale, then moved into the motif that many of us grew up knowing as the theme song for the 1960s Quaker Puffed Wheat Cereal commercials, "The cereal that's shot from guns." During the drum break, alternating performers of two arcs of horn players caught and tossed flagpoles back to the guard members.

After a couple more musical segments, the corps moved into the section where cannons are first heard in the orchestral original. Still more than 90 seconds from the end of the show, a forward push of the horns was accompanied by the ringing of an actual church bell, leading into a full horn line company front. 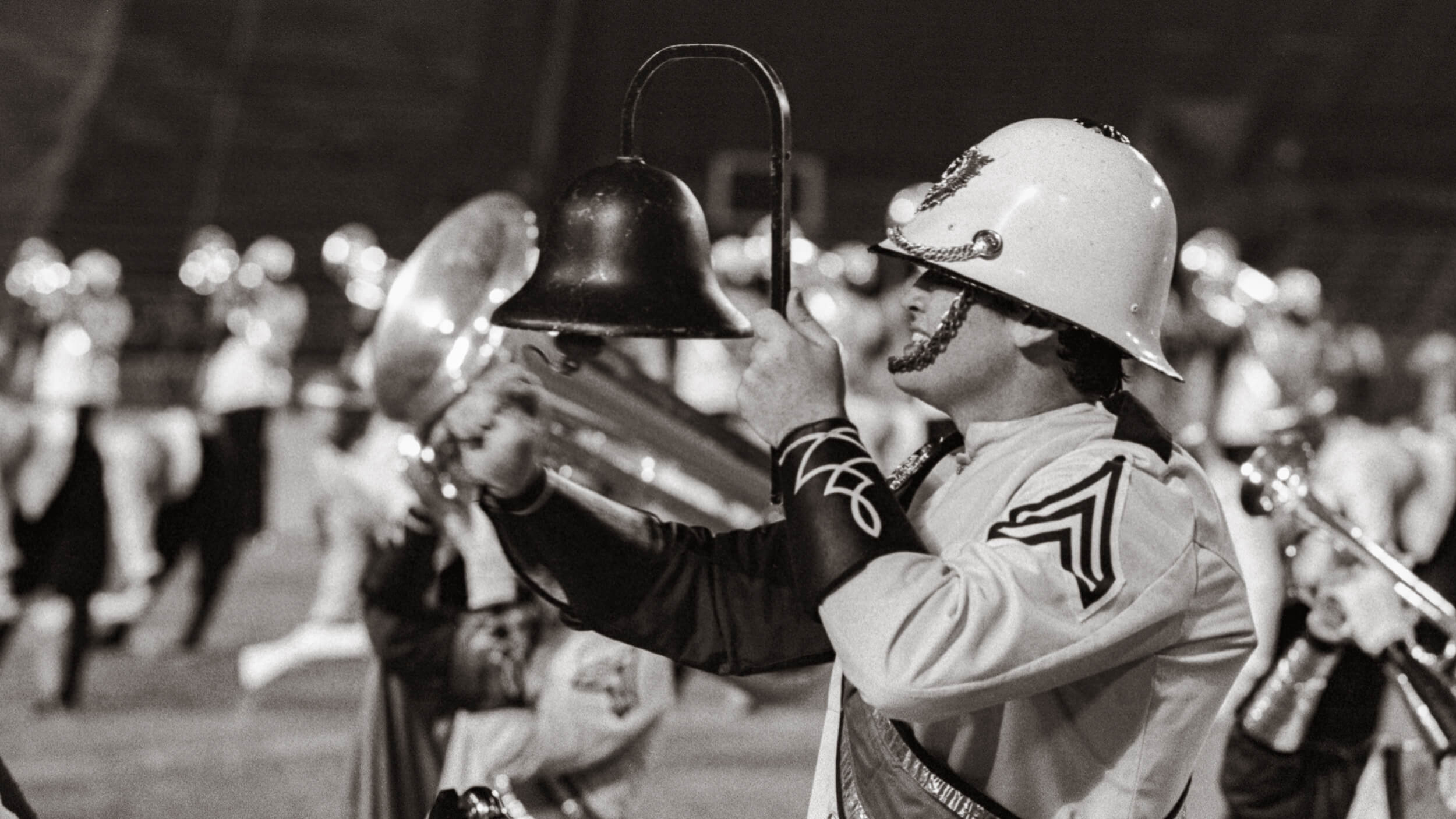 A large concert bass drum was employed to deliver the cannon shots in the finale, with the church bell ringing away and the entire color guard spinning rifles up front in a form sort of like a bell clapper. The horns, in the back, formed the dome of a massive bell and then unleashed every ounce of power still remaining on the final chords.

But one last visual trick remained for the corps' Finals-night performance.

On the final chord, as the audience started to applaud after regaining part of their hearing, the color guard tossed long white streamers into the air as if fireworks were exploding on the field. Then, as soon as the audience responded to that spoonful of frosting, the entire horn line added to the spectacular by tossing more streamers into the air. The audience responded with fireworks of its own, with many of the Regiment fans that had been let in on the effect tossing long streamers over the upper deck, filling the lower deck with an explosion of white.