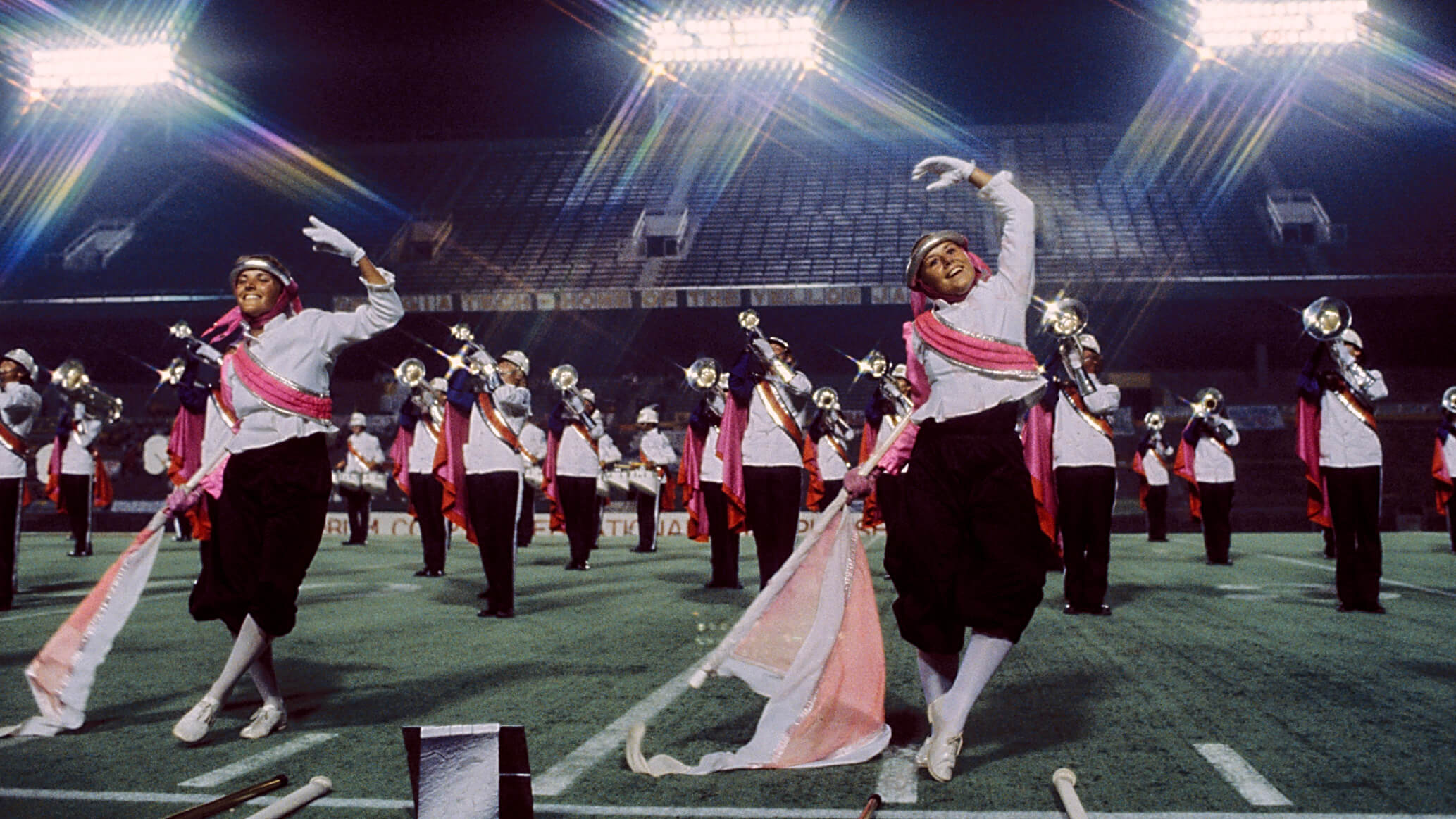 Scoring just a tenth of a point over the Blue Devils in the Finals competition, the Garfield Cadets carried home the title as they had done in 1983. The Cadets won 35 of 39 shows during the summer, losing once each to Santa Clara Vanguard and Blue Devils and twice to Phantom Regiment. DCI Hall of Fame member George Zingali’s use of a new visual style of flexible drill evolutions made the east coast corps’ “West Side Story” show especially memorable.

Other memorable elements from finalist corps in 1984 included the third-place Santa Clara Vanguard’s “Musika Bohema,” likely the most serene percussion feature ever placed on the field. Spirit of Atlanta finished sixth in front of its hometown crowd while the eighth-place Cavaliers began the corps’ transition to performing mostly symphonic repertoire. Velvet Knights made the Finals for the first time, while 27th Lancers appeared as a finalist for the last time.

Ultimately finishing in fourth place, Phantom Regiment blasted off the line to Sergei Prokofiev’s “Scythian Suite,” an orchestral work written in 1915. Regiment’s white uniform tops in 1984 stood out with one sleeve in a deep blue color. The purple linings of the red capes worn by the brass and percussion sections also served as another visual interest.

The corps utilized the “Invocation to Veles and Ala” movement of the Prokofiev piece, which is the barbaric opening of the suite. Regiment’s treatment of the work served to be downright cataclysmic. The corps accompanied the beginning with the clanging sounds of chromatic almglocken, a series of bulging tuned cowbells.

Fans of Emerson, Lake & Palmer could easily recognize the second part of the corps’ opener, “The Evil God and the Dance of the Pagan Monsters.” The arrangement took inspiration from a track on the progressive rock band’s 1977 “Works Volume 1” album.

Next Phantom Regiment utilized American composer Alfred Reed’s “Armenian Dances.” The piece, much like his “Russian Christmas Music,” is one of the concert band world’s most popular works. Regiment’s version kicked off with the fanfare that also opened the band work, “Tzirani Tzar (The Apricot Tree).” 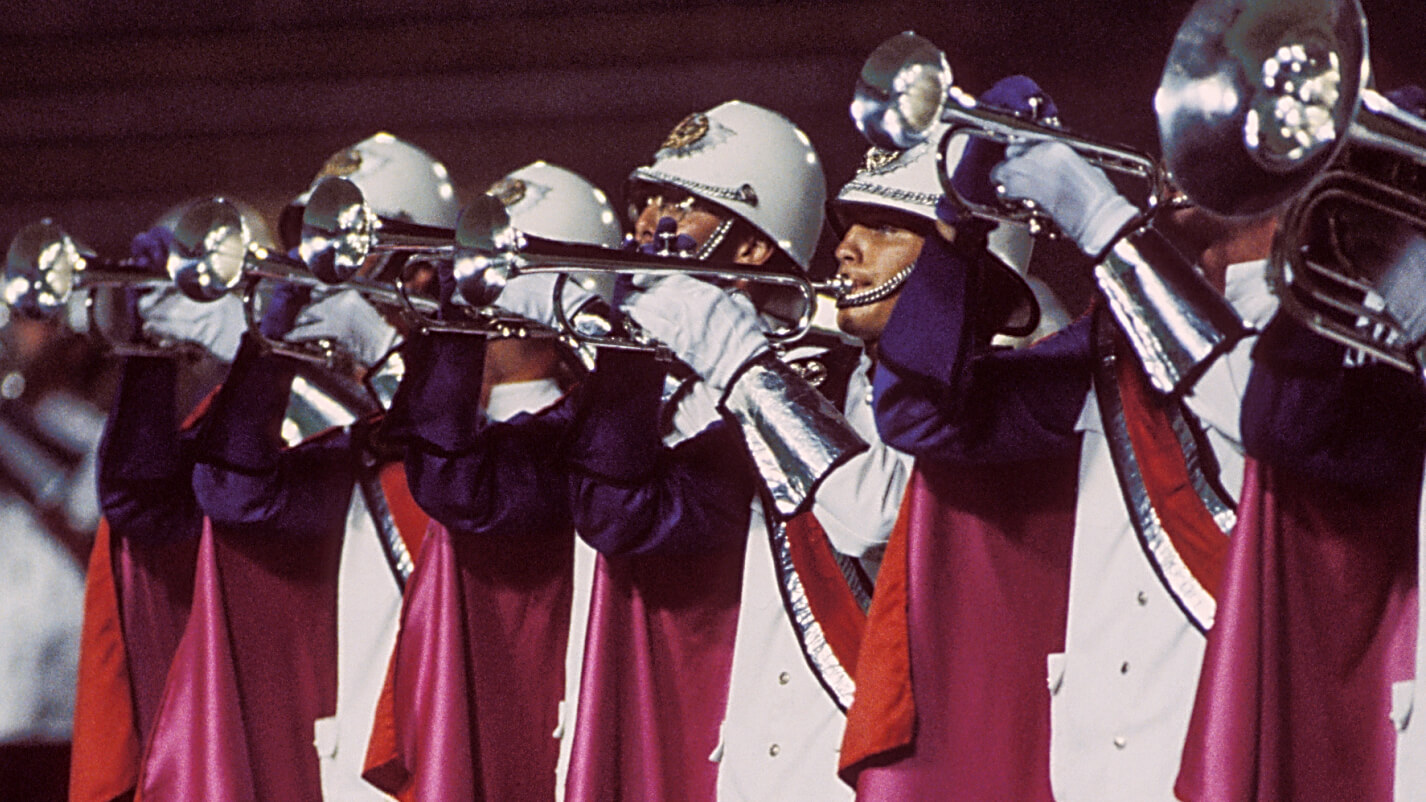 Quickly transitioning to a romantic backfield chorale, intensity built back up prior to moving into Reed’s “Gna, Gna (Go, Go),” a sprightly race to the end of the production. Reminiscent of the corps’ trademark “Rockford File” maneuver, each color guard member fell backward during a sequential flag toss down the 50-yard line.

Anthony Cirone’s “Triptych,” originally a work for four percussionists, served as Regiment’s drum feature. This production once again made use of the almglocken and featured the percussion section’s unique split-shell snare drums, a technological innovation that assisted with projection. A drill formation of two boxes of brass players passed through one another, one side showing the purple insides of the uniform capes and the other the capes’ red exteriors.

To close the show out, Phantom Regiment turned to Peter Illyich Tchaikovsky’s “1812 Overture” composed in 1880 to commemorate the Russian victory over Napoleon’s invading army. The corps got the finale underway with the lovely chorale, “O Lord, Save Thy People,” which also opened the symphonic original.

Next came the segment known to all, the overture’s best-known theme. One music historian refers to this as the “bada-bumbum-BUMbumbumbum-BUM-bum-bummmmm” theme, and if you repeat that aloud, you’ll know exactly what it is. Originally, this is the theme Tchaikovsky utilized to convey Napoleon’s invading army marching into Russia.

The final thrilling segment marked the part in the original that called for canons to be fired. Phantom Regiment substituted a large concert bass drum to take care of the repeated “boom, boom, boom.”

As the horn line marched into a company front, a huge cast iron bell repeatedly rang, along with the series of almglocken and other large metal plates, replicating the sounds of church bells that rang throughout Russia to celebrate the nation’s victory over Napoleon’s forces.

On the last note of the show, every member of the color guard section tossed colored banners into the air as if celebratory fireworks. During the corps’ Finals-night performance, its legion of fans even got into the act by tossing multitudes of banners off the top deck of the stadium, one of the rare instances in a drum corps performance where the audience became part of the act.