It's possible that more marching bands imitated Phantom Regiment's second-place "From the New World…To a New Age" show than any other corps production ever, at least according to what this author observed during marching band contests in the years immediately after 1989.

Based on Antonin Dvorak's "Symphony No. 9, From the New World" and the composer's "Slavonic Dance No. 1," this production hit an enthusiastically positive nerve with band directors and fans alike.

Dvorak, a Bohemian who had been living in Prague, was director of the National Conservatory of Music in New York City from 1892 to 1895, a position he left his native land for when he was offered 25 times his then-current salary. Enamored by the music of America, he became an advocate of the indigenous music of Native Americans and African Americans at a time when the American cultural scene was still trying to emulate that of Europe, which generally was viewed as being more sophisticated and more worthy of sophisticated folk.

When the work premiered at Carnegie Hall in 1893, it was interrupted by thunderous applause after each of its four movements. So popular has the symphony been ever since its premiere, Neil Armstrong took a recording of it with him to the Moon during the Apollo 11 mission in 1969, where he successfully executed the first walk on the lunar surface. (If you were introduced to the work while performing a concert band version titled "Symphony No. 5," you are not imagining things. Dvorak's symphonies were originally numbered according to the order by which they were published, not according to when they were composed. The numbering system wasn't updated until the 1950s.) 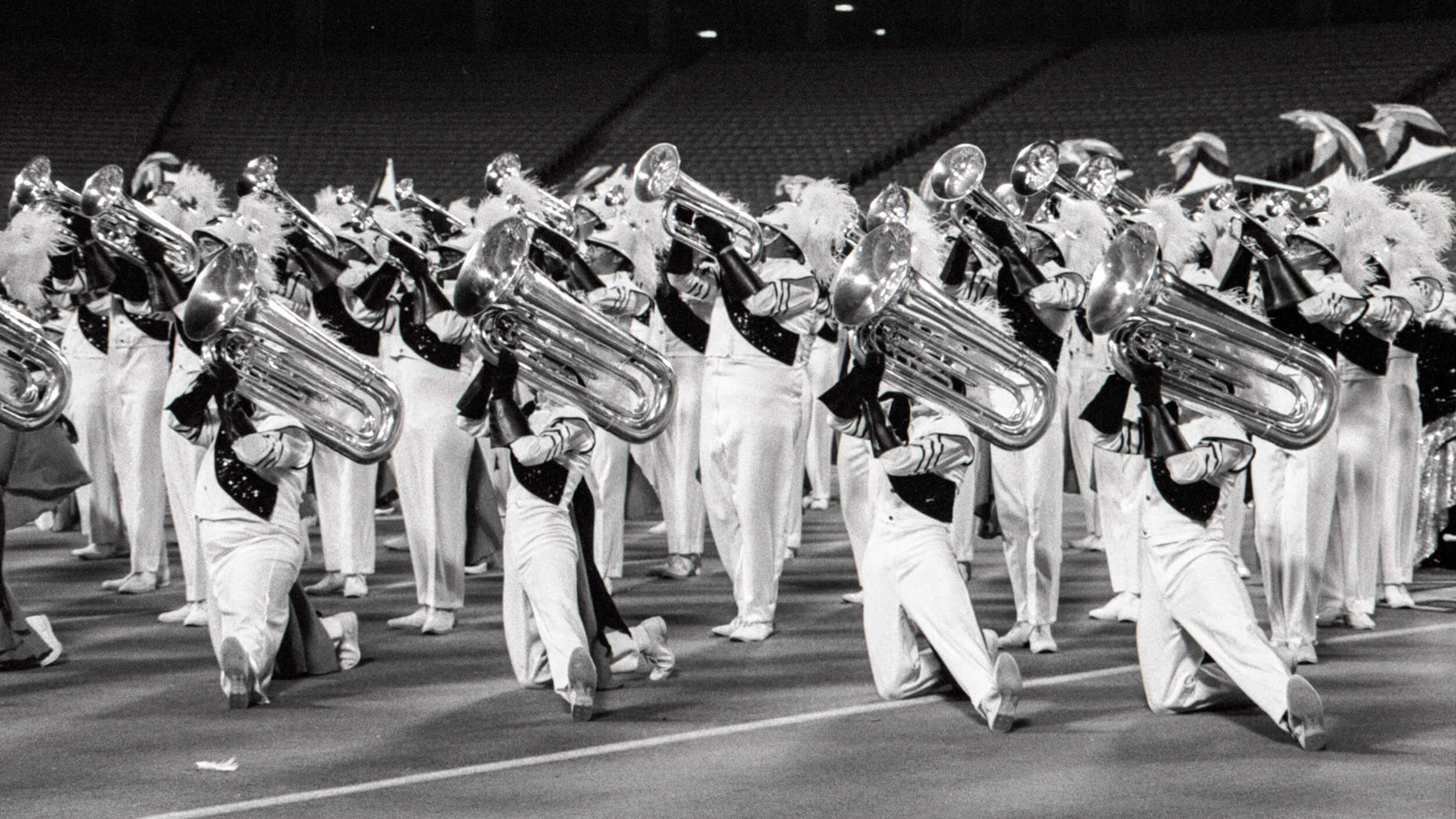 Regiment's show started with the "Adagio" opening of the first movement of the symphony, a lovely chorale that bore little resemblance to the power that would smack fans across the face until just before the first minute mark, when a standstill blast from the brass section was powerful enough to pierce lead. A few seconds later, another sonic boom came out of a triangular block that featured the front "V" of horns kneeling with one leg stretched out, a corps trademark.

Watch Phantom Regiment's "From the New World" on Blu-ray disc

A visual highlight was when the two blocks of horns first passed through each other for eight counts on an oblique angle while facing opposite directions. Each block then pivoted 90 degrees and separated from the other for eight counts on another oblique angle to the stands, both blocks facing the same direction. Finally, with one block backing up facing the stands, the other block—also facing the stands—meshed into the first block on a diagonal. It was future DCI Hall of Fame member John Brazale's signature use of conflicting mass at its finest.

Immediately afterward, eight counts of a diagonally-advancing company front, followed by eight more counts of the front moving directly forward, showcased that the corps was on fire and had no intention of having the flames extinguished.

The next segment of the show was the popular "Largo," the second movement of the symphony better known as "Goin' Home," a popular song of the era that was provided lyrics by an African American composer who befriended Dvorak during the composer's New York stay.

The front ensemble percussion presented the opening of this movement, which was rather organ-like in the original. To duplicate the sustained sound of that effect, even the vibraphone players rolled the mallet chords for an extended period, which was a rather unusual technique to be employed on the vibes during that era.

Another unusual percussion technique was arranger Marty Hurley's employment of the entire snare line up front at stationary suspended ride cymbals, giving the piece an unexpected bluesy pop groove that perfectly enhanced horn arranger Jim Wren's classic blues treatment of the piece. This was further enhanced by the jazz vibe obbligato that pealed over the field near the introduction. 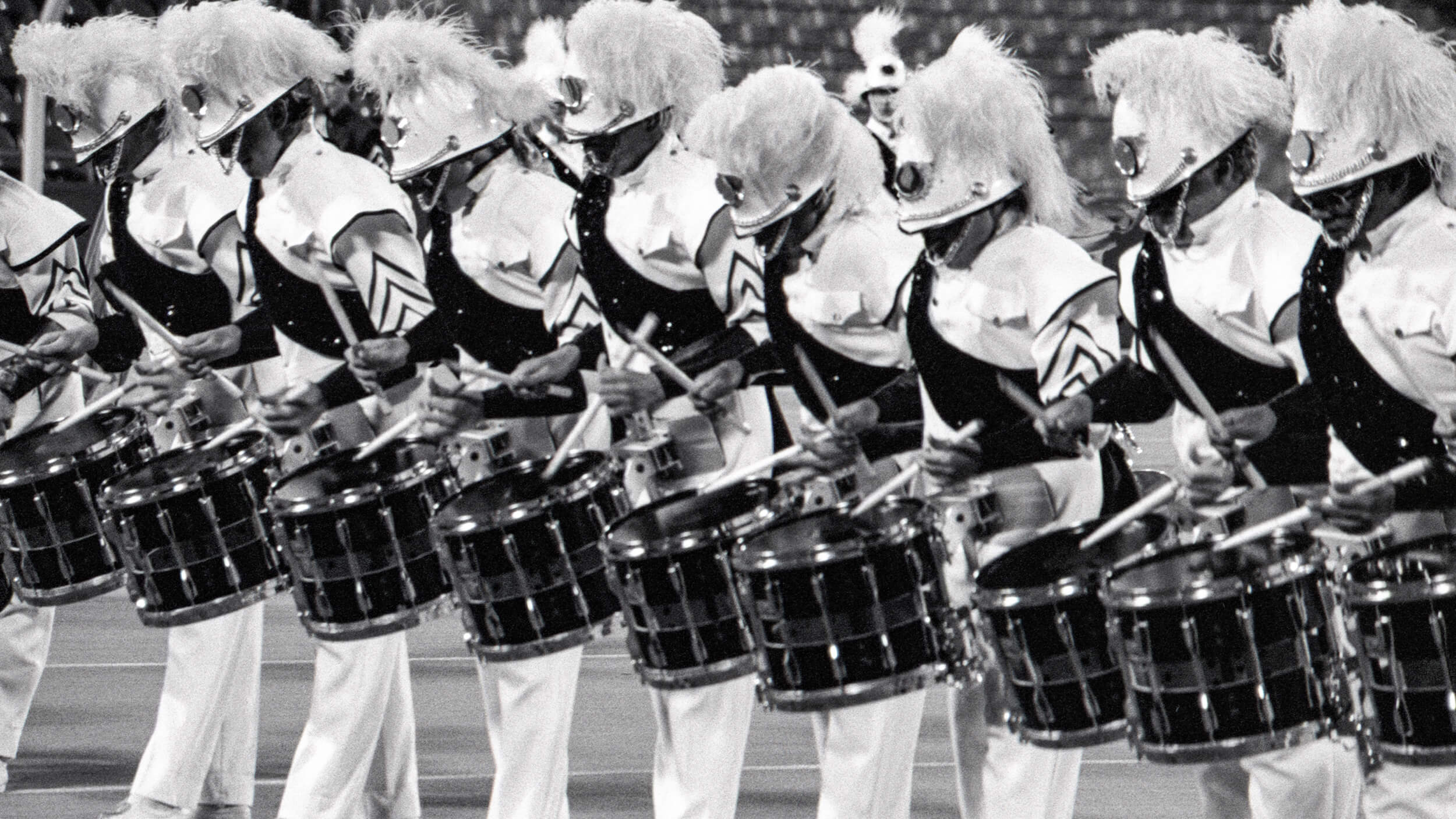 Another John Brazale trademark was what he called "icebergs," taking a static open form and moving it diagonally across the field. The entire corps (minus the stationary snares and front ensemble) did just this during the climactic hit of the movement, backing up on an angle while the giant form—based on triangles and parallelograms—remained in one rigid piece. No corps marched diagonal lines as straight and unwavering as Regiment, and this may have been the most perfect example of that quality ever.

The movement ended with the corps facing backfield, having wrung out every available ounce of emotion.

The percussion feature that followed was from Dvorak's "Slavonic Dance No. 1," the only part of the show not from the symphony. This music box rendition substituted for the "Scherzo" third movement of the symphony. Horn players made extensive use of their red capes as the color guard members danced with orange circular props that somewhat resembled a child's drawing of the sun.

The final movement of the show was a fairly literal rendition of the symphony's fourth movement finale, "Allegro con fuoco (quick and lively, with fire).” For the opening more delicate triple-meter mood, the entire guard utilized hand-held banners that each were of several different pastel colors of nature—greens, blues, tans, rust, etc.—like fields of grasses and grains against the flowing waters of a river. 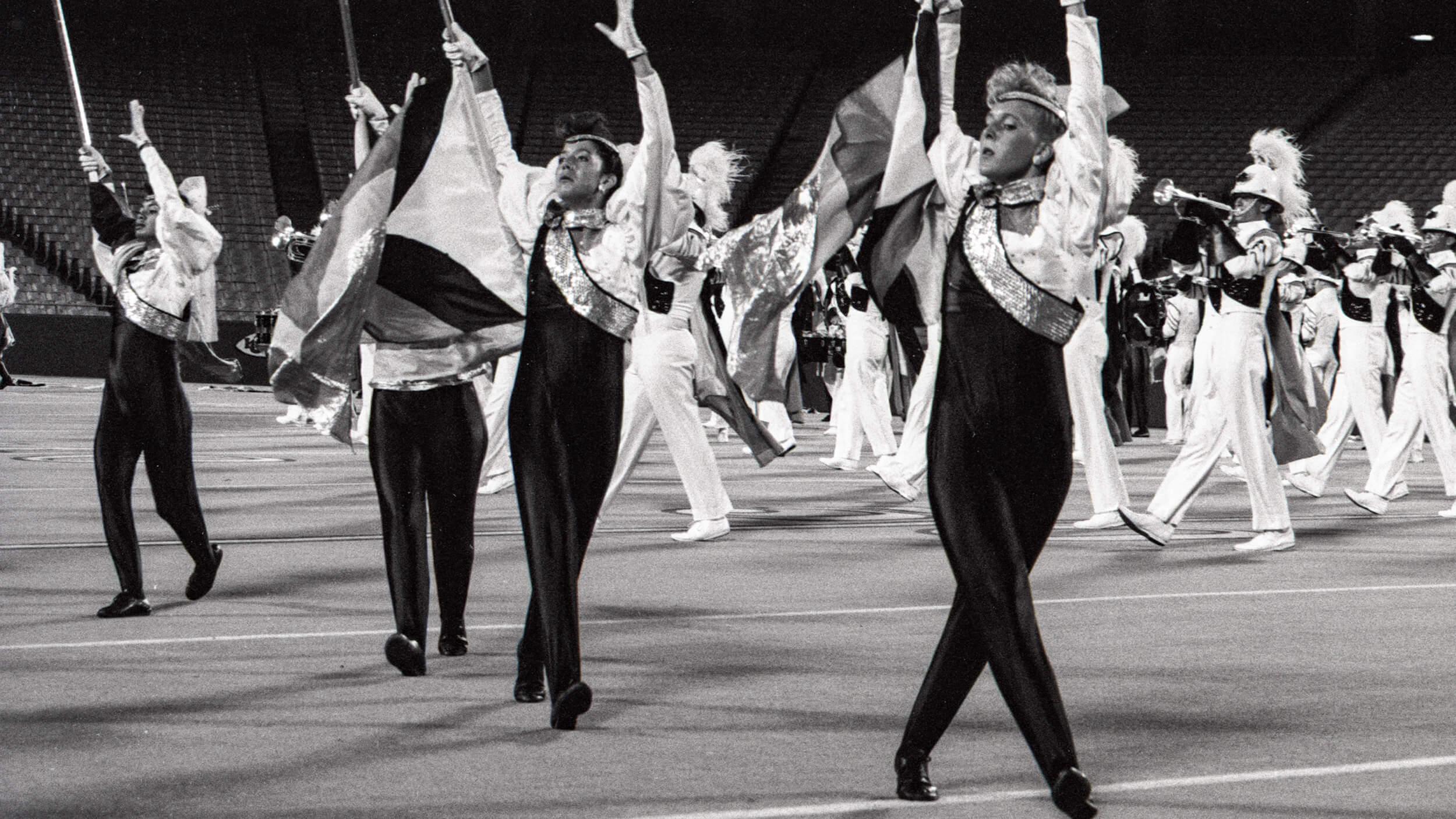 The calming repose of the end of this section was boldly interrupted by the thunderous percussion and full-throated horn blasts that opened Regiment’s 1977 second-place show, the last time the corps had utilized "New World Symphony."

At this point, it seemed that the brass players had been instructed they could leave the field only once their lips were lying on the Astroturf of Kansas City's Arrowhead Stadium. Even though there were articulate segments in this closer, it was the unbridled bombast of this movement that cleared away any cobwebs that may have taken residence under the stadium's seating. To say the brass was loud would be an understatement. The horns were glorious, ripping a new hole in the ozone layer.

Facing backfield, the corps entered a brief period when all was well and the entire world was at peace. A single large dark royal blue silk with a silver sphere emblazoned upon it seemed to represent the light from the Moon settling upon the New World. Then, the opening chords from the "Goin' Home" movement were presented in a very different context. With the explosive force of a volcano, the corps turned around and unleashed a torrent of sound that—with the speed of sound being approximately a mile in five seconds—reached St. Louis about four minutes later. 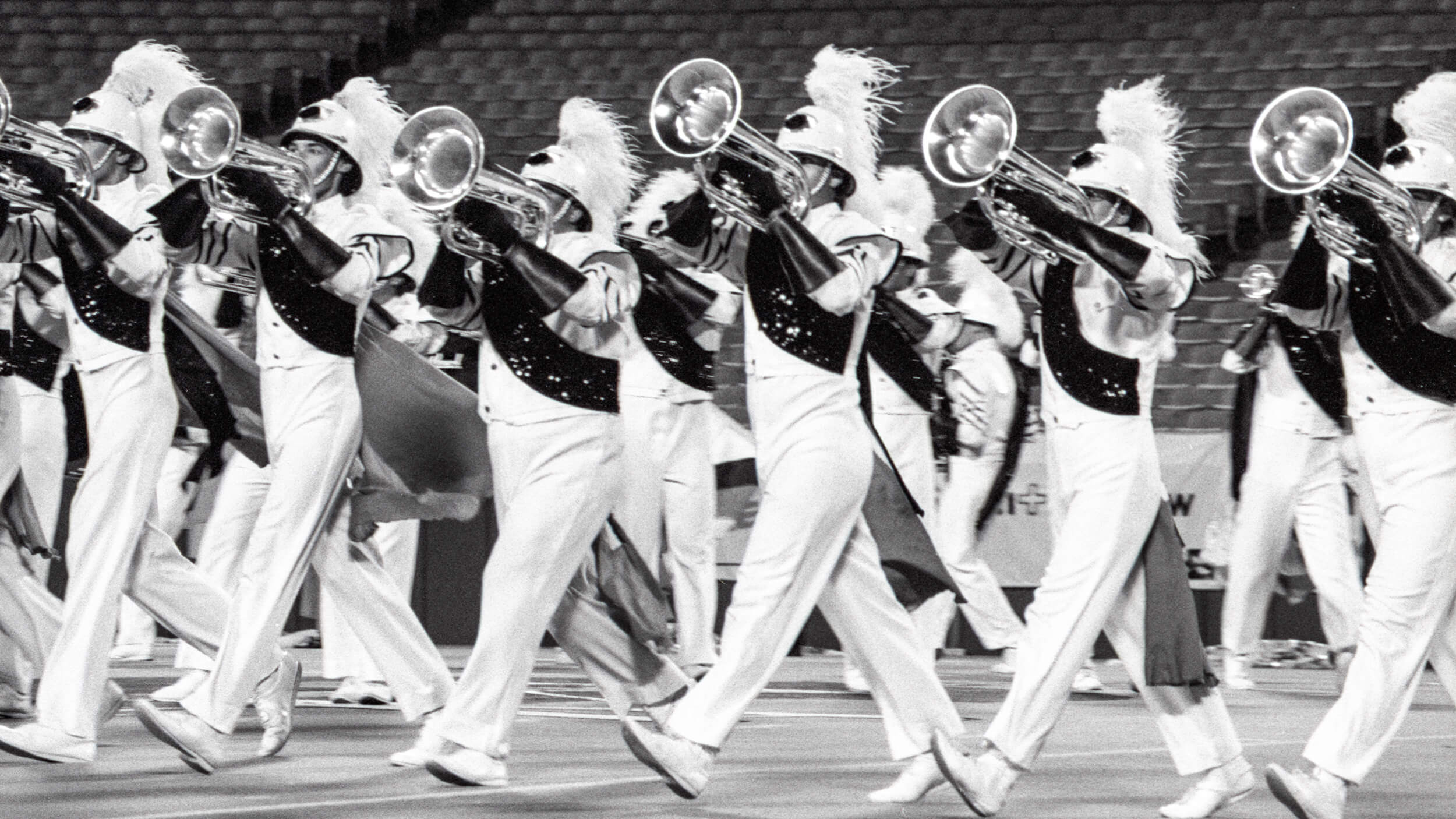 A great visual effect is one that not only bears repeating, but also demands to be brought back a second time in the same show. The maneuver of the horns passing through each other three different ways returned in an accelerated tempo, culminating with a repeat of the triangular block of horns with the front "V" kneeling with one leg stretched out.

A large silk in the form of an arrow, requiring three guard members to keep aloft, took off from the block triangle of horns and headed to the upper left of the field, its tail trailing behind all the way to the 20-yard line at the back of the horn formation. In a sense, the silk could have represented both Dvorak coming to the New World, along with all those immigrants who preceded him and came after.

But, it also could have symbolized the more contemporary path that Phantom Regiment was embarking upon over the next several seasons to come, leaving behind the old order and entering a phase of further reinventing classic symphonic music and marrying it with a colorful visual program in a style that has defined the corps ever since.