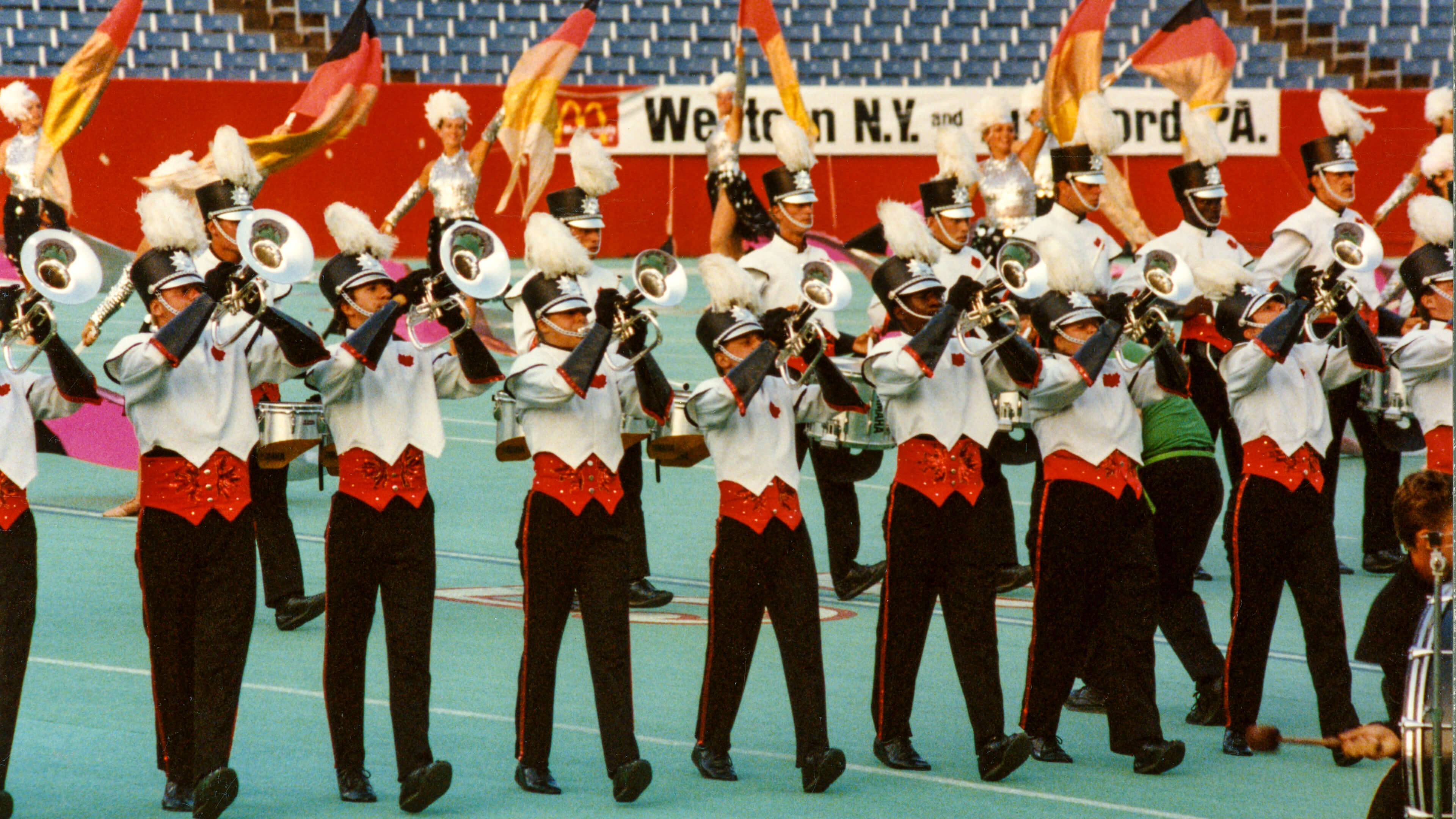 Dutch Boy is one of the seven corps that made the Drum Corps International World Championship Finals as a World Class corps just once.

Originally known as the Dutch Boy Cadets, the corps from just over an hour west of Toronto advanced to the Finals in 1990, after slowly moving up in the ranks and making the Semifinals for the first time in 1986.

1990 marked the last time we've seen a Canadian corps in the World Class Finals, which was a common occurrence in the early years of Drum Corps International when corps like the DeLaSalle Oakands, Oakland Crusaders, and Seneca Optimists took the field.

In 1990 Dutch Boy followed a new Vegas-style identity that the corps had worked to establish over several years. DCI Hall of Fame member Michael Cesario's glitzy and glamorous color guard costume design may have been responsible for a province-wide sequin shortage in Ontario.

As written in the 1990 DCI souvenir yearbook: “The corps just oozes glitz and glamour, sparkling like a bottle of high-priced effervescent mineral water.”

Dutch Boy’s “A Tribute to Frank and Sammy” set out to capture the essence of two of the greatest singers of all time, Frank Sinatra and Sammy Davis, Jr.

The Broadway tune-laden show kicked off with the color guard members in full capes and feathered headdresses as the corps blasted an intro fanfare to "Strangers in the Night," heading into an interlude of "My Way," which had been a part of the corps' shows two and three years prior.

After the brass section formed a company front while playing the "My Way" theme, the guard removed the capes and revealed a set of brightly colored flags. The opener ended with a return to "Strangers in the Night."

Cole Porter’s hard-swinging "It's Alright with Me" featured some members of the guard with large pink boas and a jazzy percussion break.

The remainder of the show paid tribute to some of Davis, Jr.’s greatest hits. "What Kind of Fool am I" explored a bit of introspection before another big musical push came forward prior to the quiet ending.

In the peppy closer of "Come Back to Me," the guard members continued to pare down their costumes, with a screaming rendition of "Once in a Lifetime" seemingly bringing the show to an end. However, in true Vegas spirit, where more isn't enough, the show finished with a short reprise of "My Way" as massively long multi-hued banners filled the field with an explosion of color.

Michael Boo was a member of the Cavaliers from 1975-1977. He wrote about the drum corps activity for more than 35 years while serving as a staff writer for various Drum Corps International projects. During his lifetime Boo wrote for numerous other publications including an honors-winning book on the history of figure skating. He also was an accomplished composer. Boo passed away in 2020.