Coming into the July 28 DCI Midwest Prelims, both Blue Devils and Phantom Regiment had been undefeated during the entire 1990 Drum Corps International Tour.

But by the DCI World Championship Finals more than two weeks later at Rich Stadium, outside of Buffalo, New York, both corps tied for fourth under the Cadets of Bergen County, Cavaliers and Star of Indiana. For the first time in DCI history, no California corps placed within the top-two spots.

Some of the most memorable highlights of 1990 included Cadets' reverse "Z" pull drill maneuver, as if watching the trademark form run backward, Star or Indiana’s biblical splendor during "Belshazzar's Feast," and Blue Devils' tarps that represented pinball machine paddles from the rock musical, "Tommy." 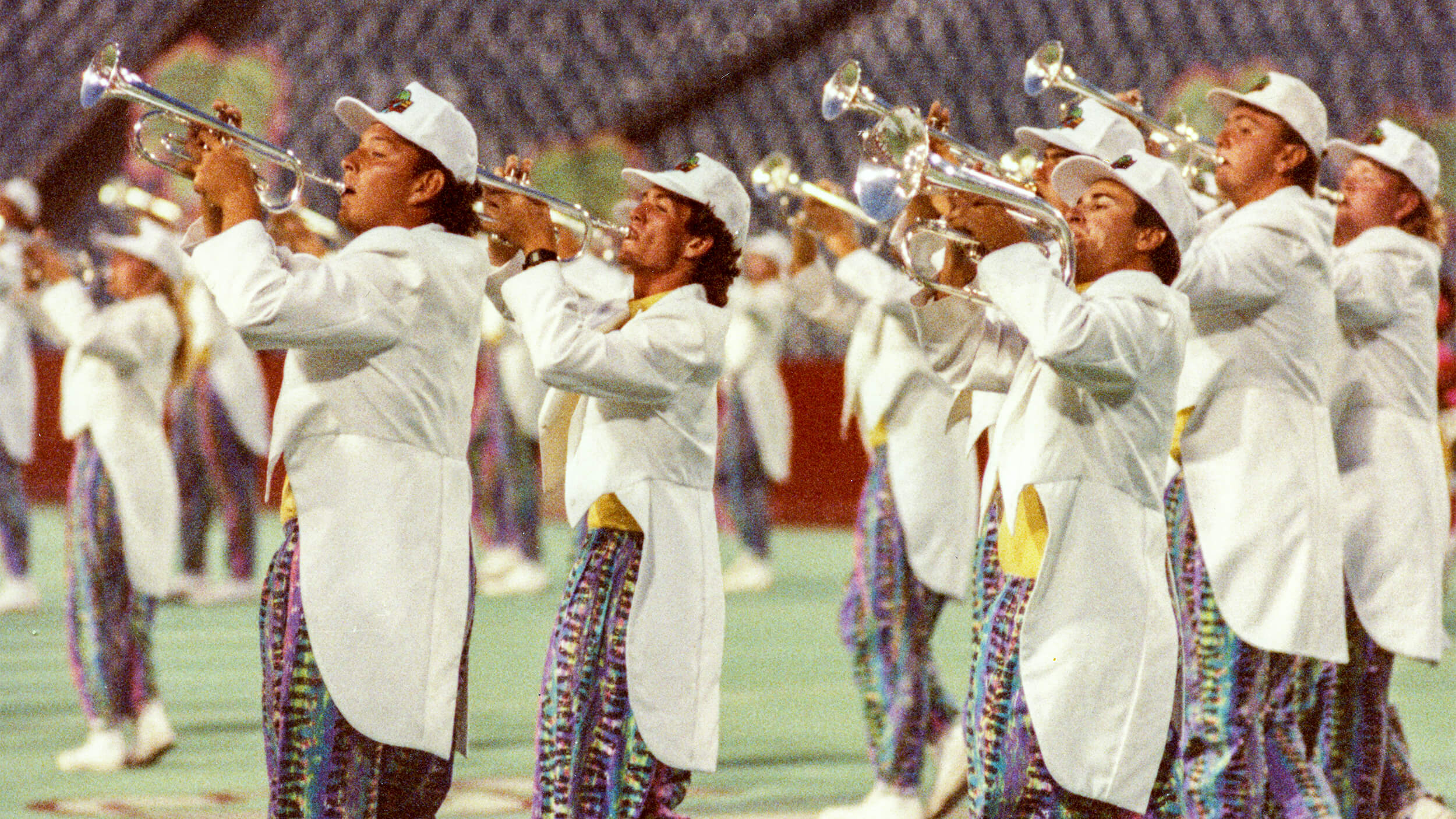 It was Velvet Knights' tour of a Hollywood studio during a show celebrating the fun of summer that had fans laughing vigorously. The show finished in 10th place on the judges’ sheets, but may well have finished in first in the category of moments fans remembered most that year.

In typical VK fashion, the show turned drum corps upside down, having a blast doing so. From the very start of the show, it was clear the corps was continuing on its path of defying convention. For example, the drum major took out a baton from behind his neck and then dropped it on the field; a spoof of Phantom Regiment's conductor routine.

A brief statement of the melody of "Summertime" (from Gershwin's "Porgy and Bess") kicked off the production, just as fans' eyes were finally adjusting to the psychedelic pattern of the stretch pants the brass and percussion members were wearing. 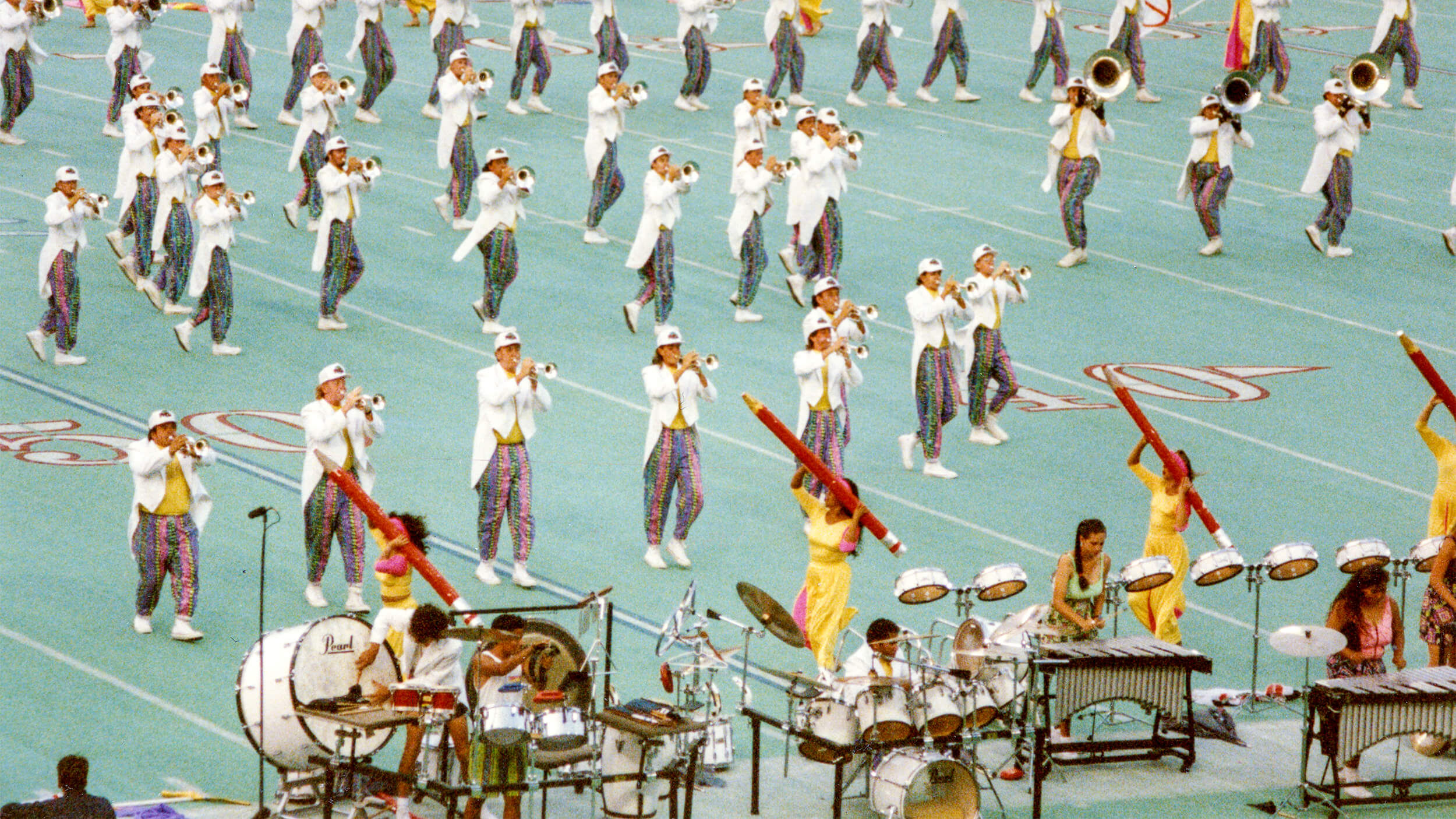 Next was a full-blast, rock-out rendition of Alice Cooper's hit, "School's Out (for Summer)," which in its original version, not only celebrated the end of the school year (and perhaps even the start of the drum corps season), but the demolition of a school building that (in a nod here to SCTV) had been “blowed up real good.”

The color guard rifle line performed with giant pencils until the key change, which was a magnificently raw and loud blasts of brass. The piece ended with the corps running into a "VK" drill formation, as if the eager students ran straight from their school building to the drum corps bus for tour.

Next up was "Universal Hollywood Studio Tour," featuring themes from a number of popular movies. During the opening 20th Century Fox fanfare, a tourist appeared from behind the tour bus set carrying his suitcase and showing a sense of being absolutely enamored at the thought of being in Hollywood, taking photographs of whatever he could.

One of the drum majors operated the swing arm on a movie clapperboard and the tour was off and running. As the tourist missed his bus during "Hooray for Hollywood"—perhaps because Bart Simpson was driving it—Homer Simpson was seen staring out the back window in terror. 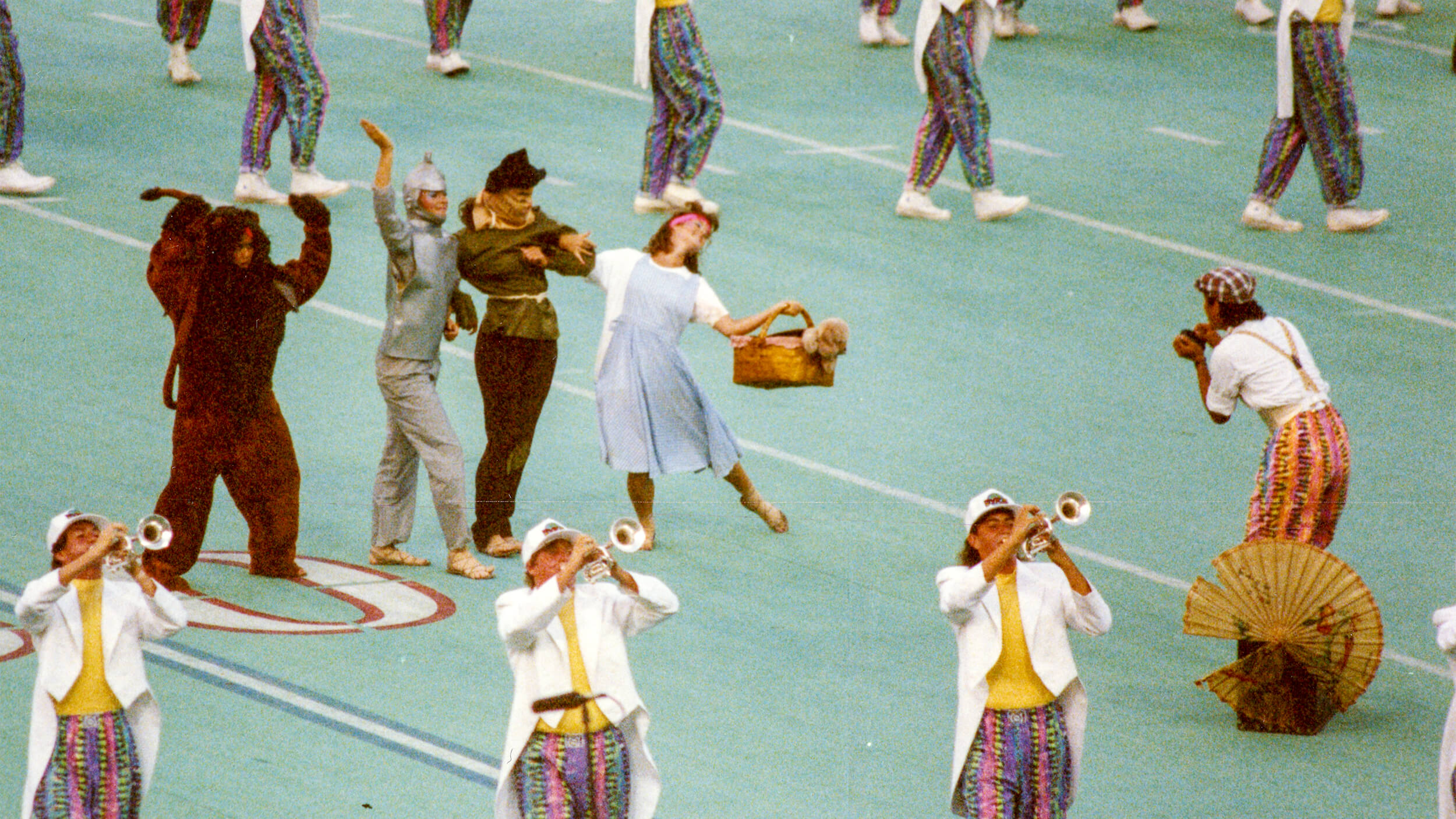 Umbrellas came out for "Singin' in the Rain," followed by an appearance of Dorothy and her three main friends from "The Wizard of Oz," all of whom gladly posed for photos during "Follow the Yellow Brick Road."

A swashbuckling Errol Flynn, during the very brief theme from "The Sea Hawk," was embarrassed when his pants fell down, revealing his boxer shorts with red hearts. But he had bigger problems when the corps formed a giant shark during "Jaws," until the bus returned to save everyone—a shark's fin sticking out of its roof.

As the bus passed, eight color guard members were revealed who spoofed Santa Clara Vanguard with an almost-performance of the "Bottle Dance" from "Fiddler on the Roof." "Almost" because instead of doing the dance on their knees, they fell over and rolled on the ground to the delight of the audience. 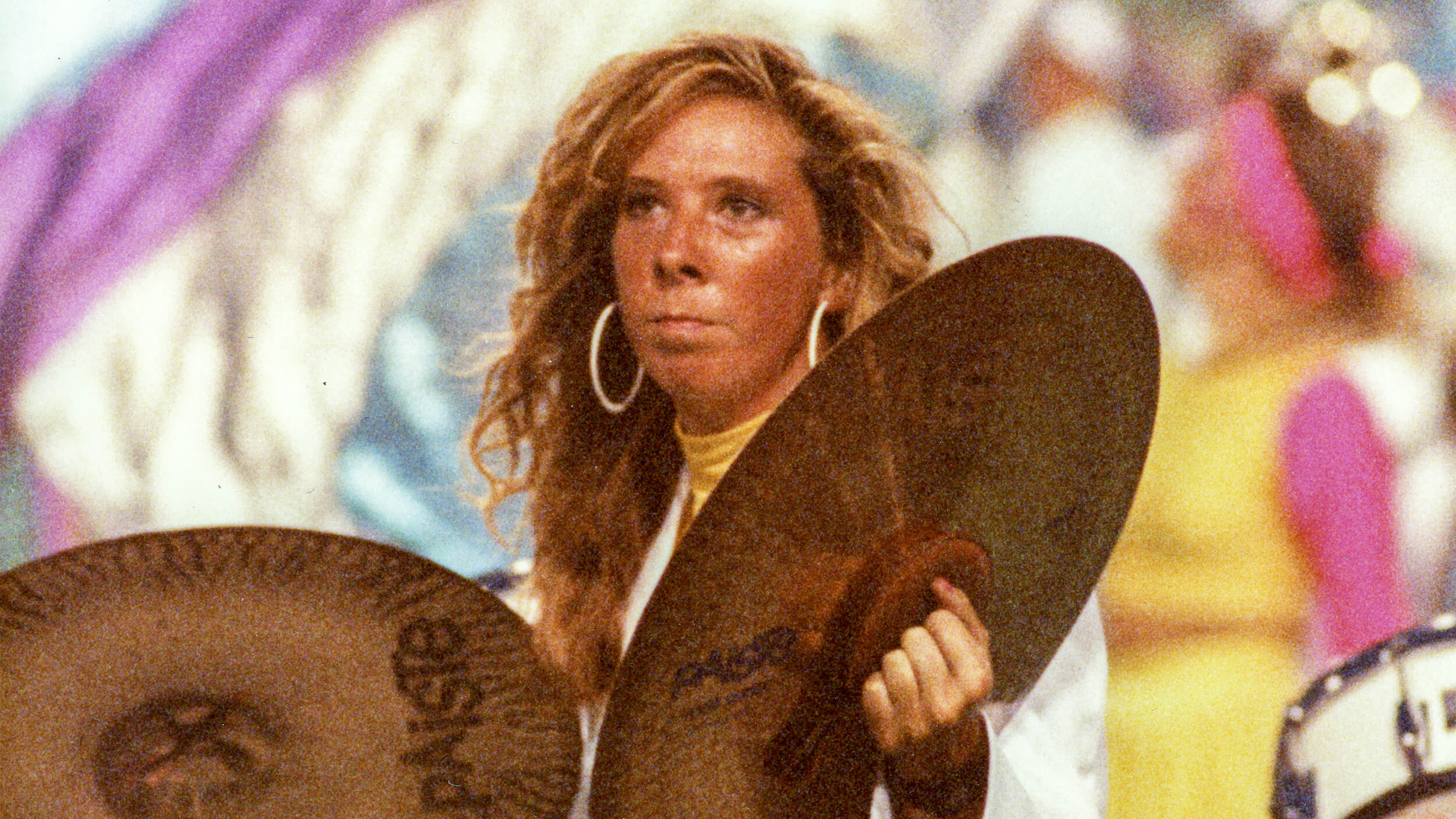 Spyro Gyra's "Slow Burn" served as an extended drum feature, with the color guard demonstrating the laid-back nature of summer by utilizing folding beach chairs as equipment. However, they, the rest of the corps and the palm trees on the field had to resist the strong Santa Ana winds that came blowing in, setting up the 15 snare and tenor drummers for an up-front solo on 16 grounded timbales.

Michel Legrand's evocative "Summer of '42" offered a melodic change of pace, with transparent black flags perhaps giving notice that nightfall was metaphorically descending upon the summer.

A closing statement of Steppenwolf's "Born to Be Wild," with the color guard members performing with giant electric guitar props, tired the corps out to the point of near collapse. But after a time-out breather, the corps rocked out for the final few seconds and then collapsed on the field, all vacationed out and ready to return to the less strenuous confines of school.