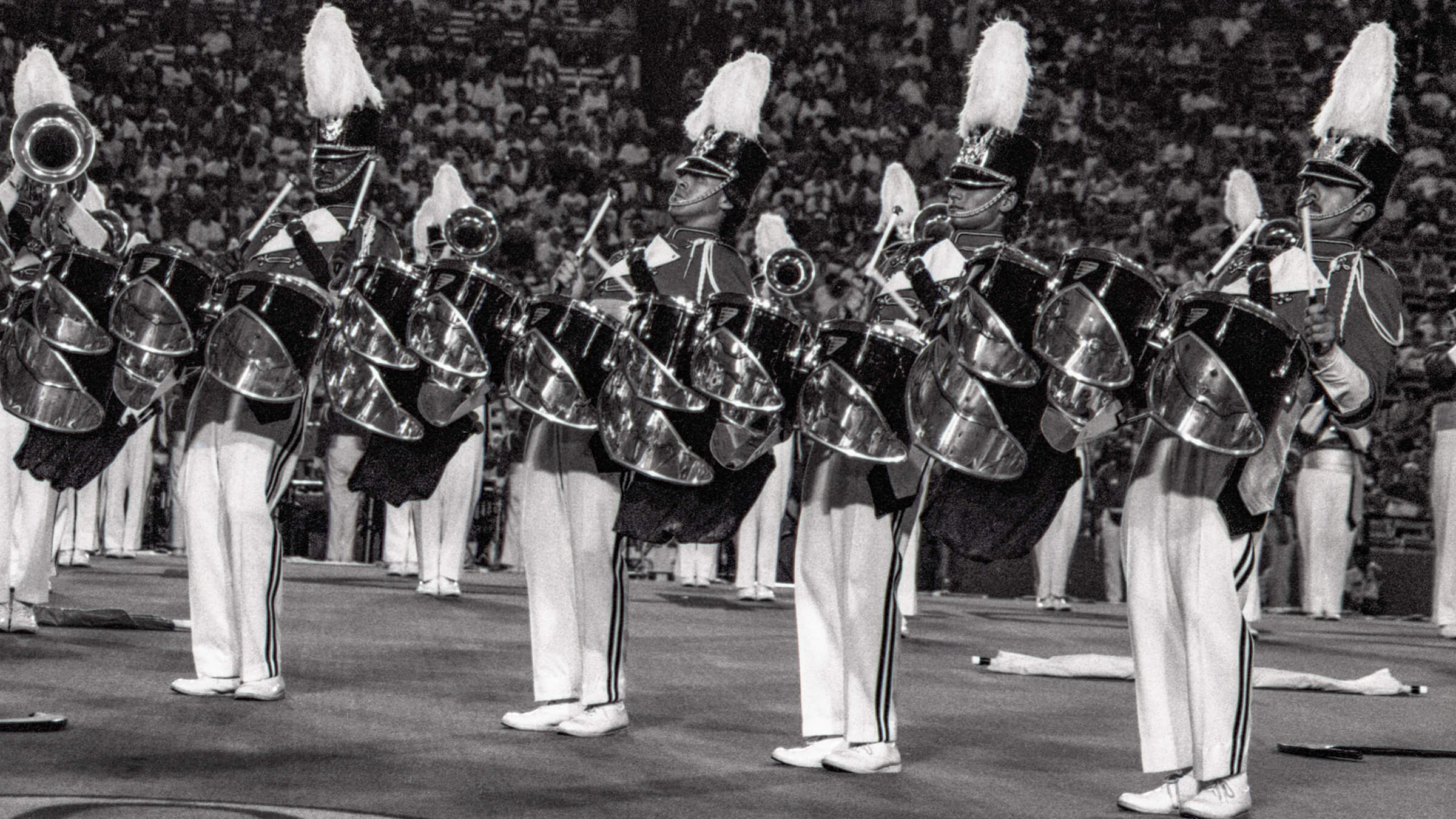 Star of Indiana took the title with “Roman Images” while The Cavaliers and Phantom Regiment took second and third places, cementing a Midwest grasp on the medalist positions.

Three top-12 corps from 1990 didn’t make it into the 1991 Finals, including Velvet Knights, Spirit of Atlanta, and Dutch Boy. It would be the last time Sky Ryders would be seen in the Finals competition, and the Saturday show also welcomed Denver’s Blue Knights for the very first time.

The 10th-place Freelancers performed an eclectic mix of music for their 1991 production, starting with the regal opening fanfare from “Hodie,” a large-scale 1954 Christmas cantata by the English composer Ralph Vaughan Williams.

The corps’ color guard costumes were a unique mix of white-legged body suits with highlights of red and long flowing red skirts in back that were more like lower body capes. Red pillbox hats adorned with large white feathers contributed to a look that was both classic and futuristic, as if the crew of “Star Trek” was attending the opera.

The next selection was the 1923 orchestral “Dance Suite” by Béla Bartók, composed for the 50th anniversary of the merger of the twin cities of Buda and Pest to form the Hungarian capital, Budapest. The introduction to the work wasn’t from the suite, but instead was the chorale from the second movement of the composer’s 1945 “Concerto for Orchestra,” a melody known to drum corps fans more for its use in the introduction of “Waltz of the Mushroom Hunters,” recorded by Buddy Rich and his big band on the album, “Roar of ‘74.” The entire color guard utilized long elongated “S” forms instead of rifles. 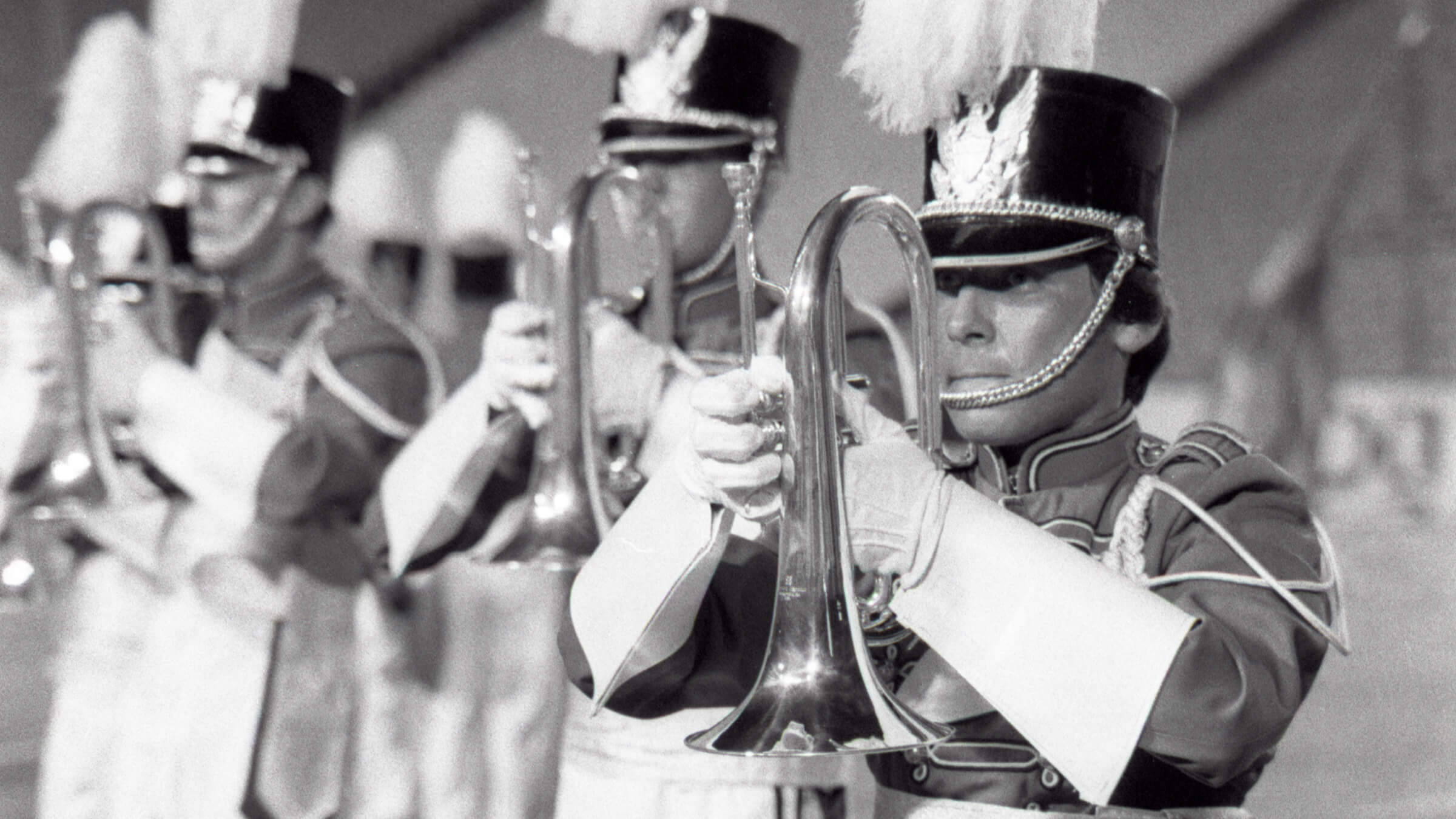 After the chorale introduction, the work progressed into the third movement of “Dance Suite,” “Allegro vivace,” based on a playfully jubilant melody inspired by Hungarian and Romanian influences.

Playing off this lightheartedness, a soprano bugler in a trio of featured brass players switched to a piccolo soprano bugle and was lifted by his elbows atop the shoulders of the baritone and contra players. With his feet not touching the ground, the trio advanced playing the melody in unison as bright colored streamers swept the way clear.

The tender ballad of Alan Silvestri’s “The Kiss” came from the 1990 science fiction film, “Back to the Future, Part III.” The color guard used no equipment for this selection, instead interpreting the lovely song with dance leading to the full corps forming a giant block heart.

The corps’ closer featured “Bells,” written by Ian MacDougall, who for 20 years was lead trombonist for Rob McConnell’s Boss Brass. Originally composed for brass choir, the piece was previously played by the corps in 1985 and 1987.

Peals from the metallic keyboards created the effect of multitudes of ringing bells. Various brass voices also picked up the tolling of bells, creating a controlled cacophony of sound as more and more horns joined in on the effect.

Long, flowing silks of different vibrant colors filled up the back of the field as the show was brought to an ecstatic conclusion.