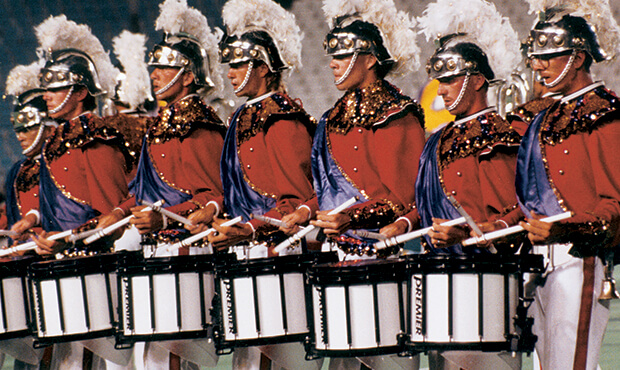 1991 Star of Indiana
In 1991 the Drum Corps International World Championships went to Cotton Bowl Stadium in Dallas, Texas. For the first time in DCI history, the top three corps in the Finals competition—Star of Indiana, Cavaliers, and Phantom Regiment—all came from the same region. Also for the first time, Blue Knights earned a spot as a finalist corps. With its 1991 production "Roman Images," Star of Indiana marked its first and only World Championship title before ceasing to compete after the 1993 season. The show was based on two of the three tone poems in what has come to be known as Ottorino Respighi's "Roman Trilogy," which consisted of the 1916 "Fountains of Rome," the 1924 "Pines of Rome," and the 1928 "Roman Festivals." The show utilized all four movements from "Roman Festivals" and the first movement from "Pines of Rome." Star of Indiana's performances opened with "Roman Festivals Mvt. I, Circuses." "Roman Festivals" is widely regarded as the most demanding among the three works in the trilogy, and Star's mellophone line learned that all too well. The brass charts, arranged by DCI Hall of Fame member Jim Prime, Jr., were quite demanding. Like the three remaining movements that were to follow, "Circuses" portrayed a scene from ancient Rome. Setting the theme, the brass players and percussionists were adorned in sparkling golden overlays and purple sashes, with metallic helmets topped with swept-back Roman soldier plumes. Brass fanfares were used to echo the drama of the gladiator contests that attracted throngs of bloodthirsty fans. Those battles were inferred on the football field by giant bow and arrow props twirled about by the color guard members. The show continued with "Pines of Rome Mvt. I: Pines of the Villa Borghese," the first of four movements from the work depicting pine trees in different Roman locations at various times of day. Respighi conceived this movement as representing children playing amidst the trees of the gardens planted as a memorial to the family of noblemen who became notable patrons of the arts in Rome, as well as producing Pope John V. 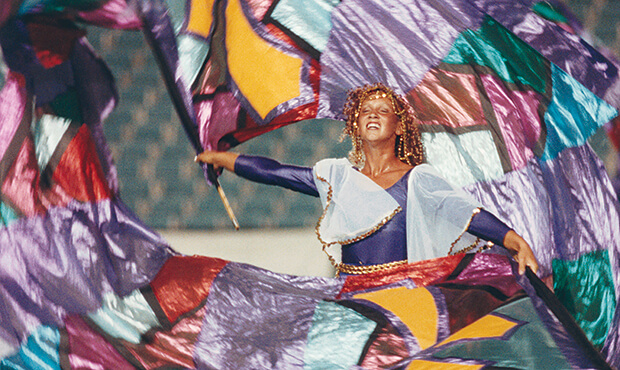 1991 Star of Indiana
A carpet of metallic sounds from the front ensemble percussion section kicked off the movement, that soon led into a drill form depicting "X" and "P," the first two capital letters of the Greek word for "Christ," elements that were later adopted by Roman Emperor Constantine to create the Chi-Rho, an ancient Christian symbol. This was followed by the symbol of the Ichthys, from the Greek word for "fish," which in later centuries became commonly known as the Christian "sign of the fish," or even more informally, the "Jesus fish." As part of the visual production, drill writer George Zingali split the front ensemble in half so he could bring the marching corps members to the front of the field past the sideline. The middle movement of the show was "Roman Festivals Mvt. II: Jubilee," which Respighi wrote about the church faithful on a pilgrimage to Rome to celebrate the Christian Jubilee. The first part of the movement was quite subdued, with a large cross—draped with red and white fabric representing the tattered garments of Christ—swooped across the field. The procession was interrupted by peals of church bells. "Roman Festivals Mvt. III: Harvest of October" celebrated the fall gathering of crops for the coming winter. This was an extremely short segment of the show, almost immediately seguing into "Roman Festivals Mvt. IV: Epiphany." During the beginning of this final movement, the color guard performers employed square reflective props set inside round rims that rotated. The ensuing sparkle they created under the bright stadium lights was akin to camera flashes set off across the field. The closing drill formations of Star of Indiana's 1991 production were learned less than two weeks prior to the start of the DCI World Championships. George Zingali had an idea in his head that was destined to become one of the most incredible marching evolutions ever. It is said that he taught the end-of-show mirror image cross-to-cross maneuver from his imagination and his memory. Nothing was sketched on paper. Related content: Remembering George Zingali. The result is remembered as one of his single greatest masterpieces, one that more than 20 years later is still remembered and talked about among drum corps aficionados. The first cross rotated into position, its bottom chiseling into the open front ensemble area while the color guard members spun huge flags reminiscent of stained glass windows. Then a visual flurry of brass and drums exploded every which way, seemingly helter skelter. Miraculously, the cross popped into position, oriented to the other side of the field from which it began, with the color guard members now holding gigantic flags emblazoned with a golden image of the Chi-Rho. No matter how many times one watches the transformation, it's no less stunning. Tragically, it would also be one of the last things that Zingali created. Less than six months later, the world lost him forever. But he lives on in the hearts of everyone who knew him and in the numerous video clips of his greatest creations.

For this week only, you can save on the Legacy Collection DVD that contains this complete Star of Indiana performance, along with all finalists from the 1991 DCI World Championships.