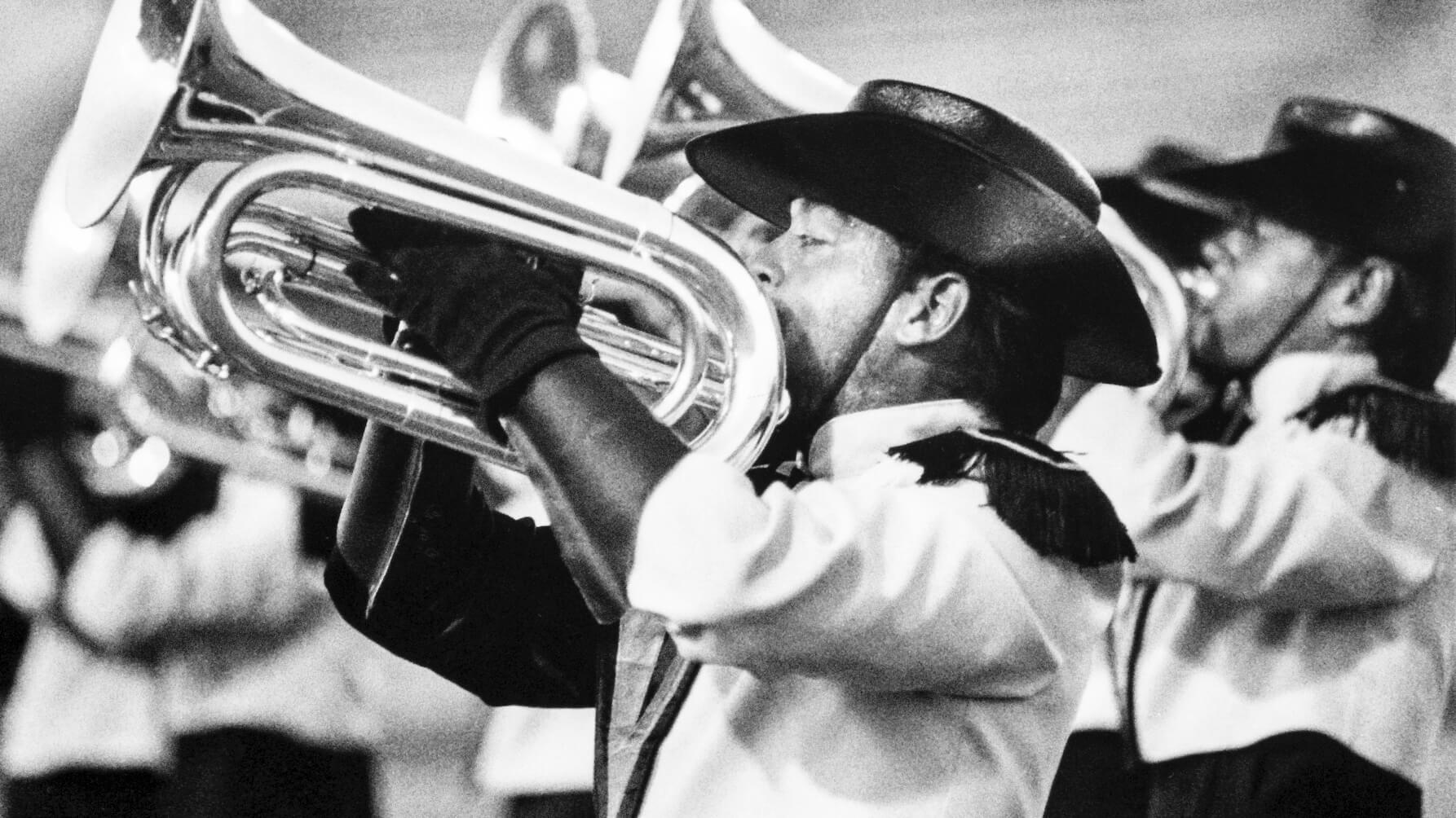 For the first time since 1990, the Drum Corps International World Championships returned to Ralph Wilson Stadium in Orchard Park, New York, to end the 1995 summer season.

The Cavaliers picked up the corps’ second DCI title with “The Planets,” revisiting the music the group played a decade earlier when it first broke into the top-five at the DCI Finals. The Green Machine managed to top the third-place Blue Devils’ eerie “Carpe Noctem” in all three shows at the World Championships after losing to the Devils all four times the two corps met earlier in the season. Broadcaster Steve Rondinaro referred to the Blue Devils show as “drum corps from the dark side.”

The Cadets slipped in between those two other medalist corps with a show titled, “An American Quintet,” a retrospective in recognition of the 50th anniversary of the end of WWII. Madison Scouts’ fourth-place “A Drum Corps Fan’s Dream” received its title retroactively when the corps came out with “A Drum Corps Fan’s Dream: Part Dos” the following year. The entire show generated some of the loudest screaming from the audience to be heard all season.

Glassmen finished in eighth place in the Toeldo, Ohio corps’ last year under the direction of Dan Acheson, who was about to leave the corps to become DCI’s Executive Director. Under Acheson’s leadership, the corps placed higher than the season before for an astounding 10th year in a row, a feat that has never been duplicated by any corps. In 1986 the corps moved up to 31st place from 39th the season prior, then placed 30th, 25th, 23rd, 18th, 17th, 13th, 11th, 10th, and 8th.

The corps’ “A Joyful Celebration” production started dynamically with a brief quote from J.S. Bach’s “Little Fugue in G minor,” originally written for organ during the first decade of the 1700s. It’s one of the classical master’s most famous melodies. The opening fanfare led into a sideways form of the corps’ angular abstraction of the letter “G,” seen on uniforms and souvenir merchandise.

Bach’s reverent “Jesu, Joy of Man’s Desiring,” composed in 1723 as part of a multi-movement cantata, followed the fanfare. The melody is often heard during weddings and in church during festive seasons of the Christian calendar. It’s continuously moving counter-melody is often confused as being the melody, which is the more elongated phrase that floats behind the nonstop musical line.

This slow selection was a captivating repose of beauty that was out of character with much of what audiences had witnessed prior from the corps. The work took time to ooze across the field, interpreted by a color guard section costumed in ruffled blouses and elegant maroon brocade jackets.

Next came a contemporized praise version of Ludwig van Beethoven’s “Joyful, Joyful, We Adore Thee,” often known as “Ode to Joy,” the final movement from his “Symphony No. 9,” written 1822-1824. One of the best-known melodies in all of music, the work was written when Beethoven was nearly deaf. Glassmen’s rendition played off the recently popularized approach of taking church hymns and adding a semi-rock beat to reach a larger modern audience that may not have responded as well to traditional church music.

Clanging bells and other metallic sounds introduced a percussion feature of Bach’s “Toccata and Fugue in D minor,” popularized in Disney’s groundbreaking animated film, “Fantasia.” The percussion-focused arrangement provided only a glimpse of the famed “Toccata,” and for that one had to really be tuned in. Most of the work was dedicated to the “Fugue” section, where the cymbal line played metallic rims arranged like triple tenors.

Glassmen turned to Martin Luther’s “A Mighty Fortress,” written by the leader of the Protestant Reformation sometime prior to 1530, for the corps’ closer. It is one of the most famous of Lutheran church hymns and has been embraced by numerous denominations.

Introduced by a very faint recap of “Jesu, Joy of Man’s Desiring,” the tempo of the closer soon took off, propelled by another contemporary approach to a classic melody, highlighted by green and gold flags and ending with a loud, enthusiastic blast of spiritual acclaim.

After placing in Finals three years in a row, Glassmen slipped to 13th in 1996, but rebounded to eighth in 1997 and placed fifth three of the next four years.