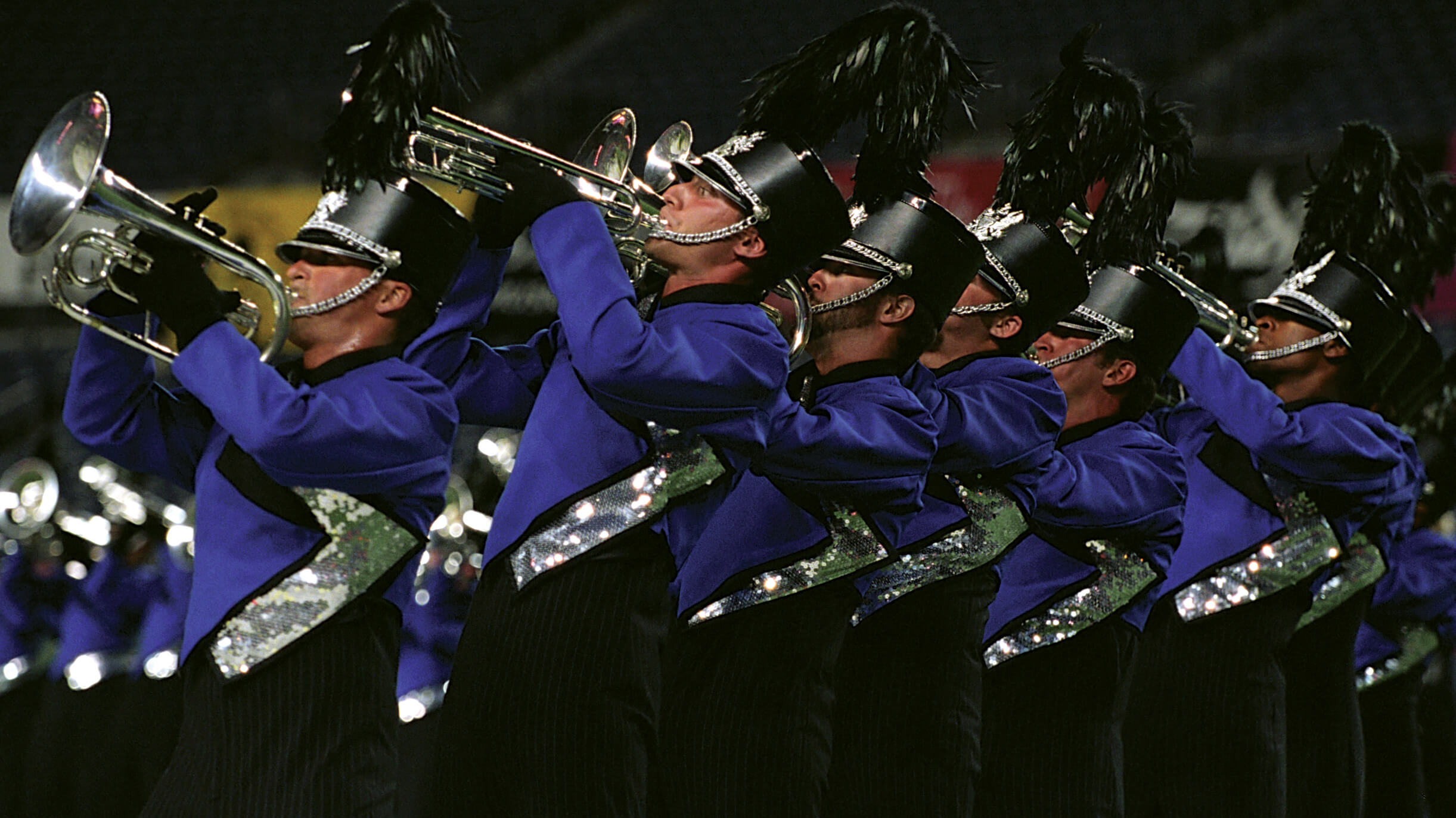 The 2004 Drum Corps International World Championships came to INVESCO Field at Mile High (now Empower Field) in Denver. The new facility, opened in 2001, sat next to the former site of Mile High Stadium home of the 1977 and 1978 DCI Finals.

So much had transpired on the drum corps field in those intervening years; most noticeably the DCI rule change to allow the use of any-key brass instruments in 2000 and the gradual growth of the front ensemble percussion section, as well as dance becoming a major attribute of color guards. Perhaps the biggest change in 2004, one most noticed by fans, was the newly legalized use of amplification that resulted in the addition of some new front ensemble instruments as well as singing and narration.

The Blue Devils came into Denver nearly untouchable, winning 24 of their first 25 shows and besting The Cavaliers in the only two events in which the two corps met prior to arriving in Denver, where the Green Machine took all three World Championship events. Starting the season on a somber note, the Blue Devils mourned the loss in May of corps founder and longtime director Jerry Seawright.

Blue Devils’ “The SummerTrain Blues Mix” emerged from a train yard of the ghosts of blues musicians who rode the rails from city to city in open boxcars. Beginning with two frenzied segments of Eric Whitacre’s 1993 “Ghost Train Triptych,” the composer conceived the work to represent a paranormal mystical train of legend moving through America’s Old West. Originally written for 100 trombones and percussion, the piece became the first of three movements for wind ensemble, effectively launching Whitacre’s career as an esteemed composer for band.

The males of the Blue Devils color guard wore simple work uniforms of those who built the American railway system, with their flags featuring abstractions of the ties that served as the rails’ base. The percussion section created a variety of chugging effects representing a steam train moving down the tracks, interspersed with the sounds of railroad spikes being hammered into position. The brass section served up numerous fast melodic runs and references to rapid Doppler waves descending in pitch as a train’s locomotive disappears into the distance.

The following selection, comprised of George Gershwin’s “Summertime,” originated as an aria in his smash-hit 1935 folk opera, “Porgy and Bess,” and became one of the most-recorded songs in the history of American musical theater. The opera dealt with life in the ghettos of Charleston, South Carolina and came to Broadway with an all-black cast of classically trained singers, which at the time was socially daring. 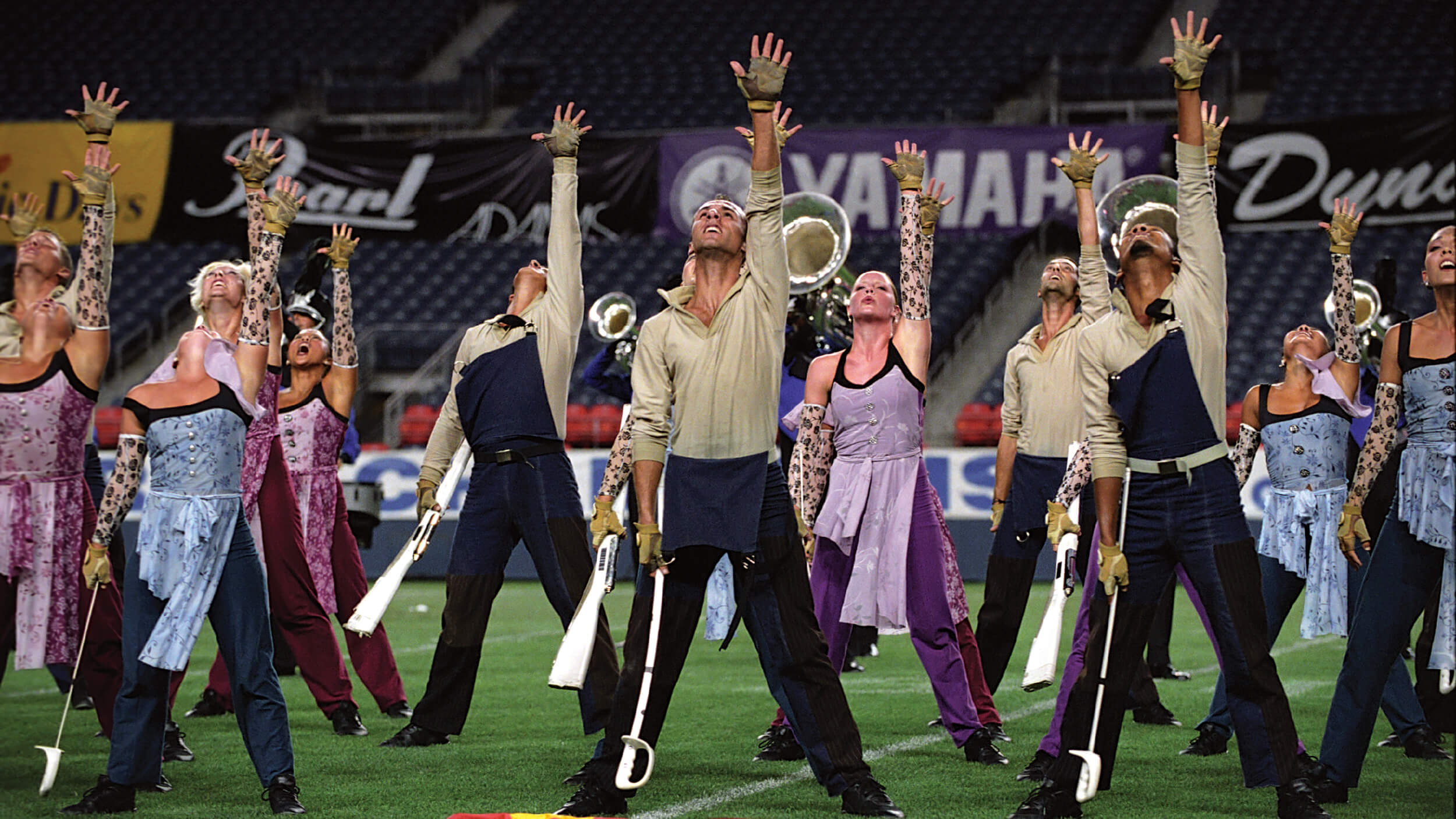 Performed as a relaxed ballad with Afro-Cuban percussion influences, this movement featured an amplified udu in the front ensemble, which is an African kiln-fired clay pot hand drum. The new yellow and orange flags featured another take on the ties of a railroad track, brightly contrasting the restraint of the music. Color guard members laid their flags on the field as if the two tracks of a railroad, followed by male guard performers marching between the two rails, hoisting imaginary sledge hammers over their heads and bringing the hammers down on the freshly-laid spikes.

Mechanized sounds of rail construction evolved into the sound of a train picking up steam. A front ensemble percussionist swung a six-foot-long length of train rail suspended inside a triangular metal frame to create a deafening clang. Numerous members of the brass section played into handheld acoustic megaphones and turned them to the side to create another Doppler Effect of a train whistle passing by.

The members of the drum line picked up speed to represent a train doing the same, leading into Billy Strayhorn’s 1939 “Take the ‘A’ Train,” the signature piece of the Duke Ellington jazz orchestra.

The show ended with a very brief snippet of “Calling the Indians Out,” the first movement of the two-and-half hour-long Wynton Marsalis jazz oratorio, “Blood on the Fields.” The work, which followed the saga of a black couple transitioning to freedom from a life of slavery, received the 1997 Pulitzer Prize for music, the first jazz composition to be awarded that honor. Marsalis’ description in the work’s libretto simply states, “Trouble in our own land, crimes against the human soul far too large for any describing words to hold.”

One of the most effective ending moments in DCI history was saved for the corps’ Finals-night performance in Denver. Instead of ending in the end zone as they had most of the season, the corps created the impression of a runaway train, barreling into the stadium’s front tunnel just to the right of the audience. Two quick clangs of a train crossing bell brought the show to an end.

Hung over the entrance to the tunnel was a banner declaring, “Jerry’s watching.”