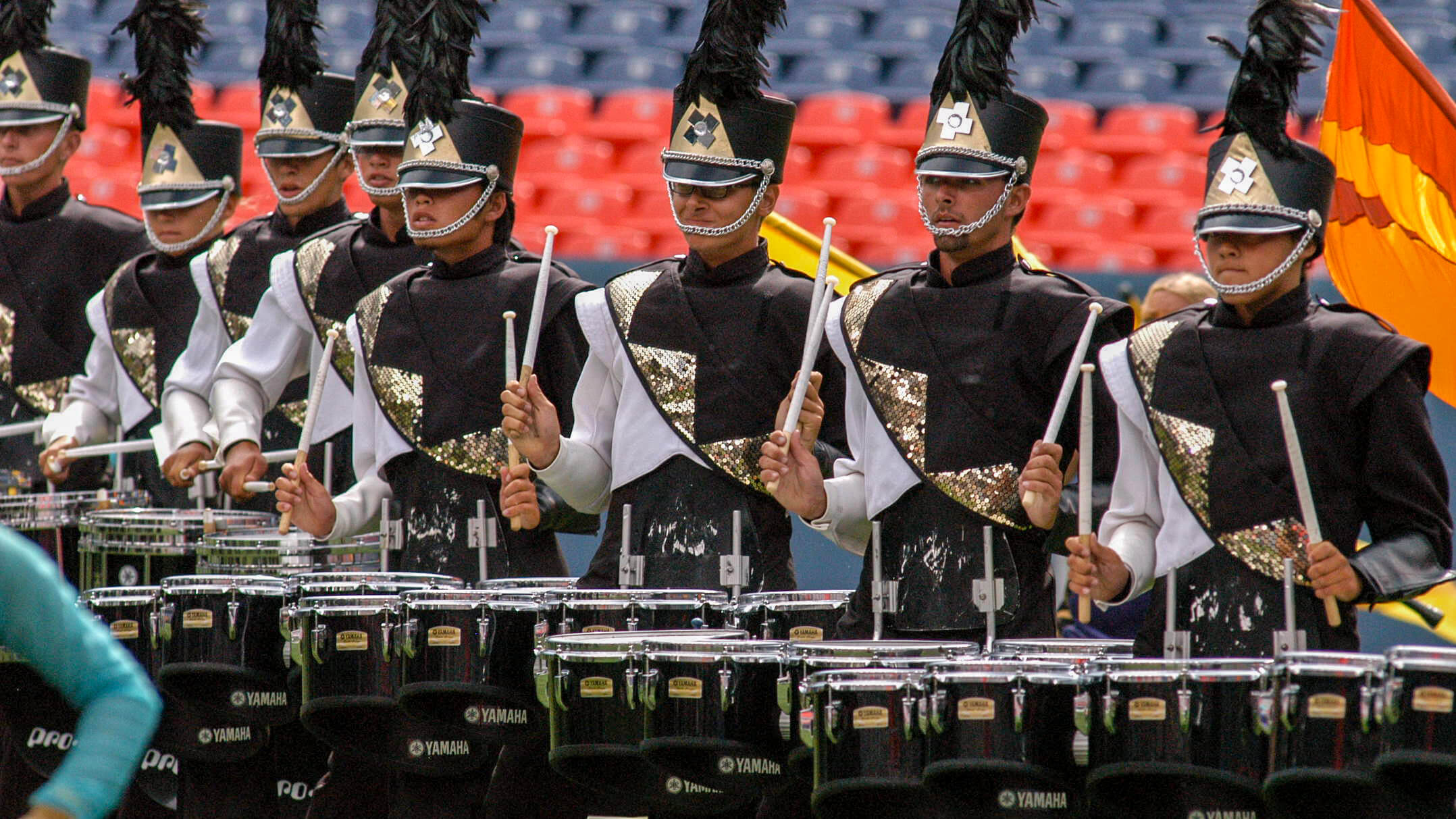 The 2004 Drum Corps International World Championships marched into Denver, Colorado’s three-year-old pro football stadium. The facility is located next to where the original Mile High Stadium sat, which hosted the 1977 and 1978 DCI World Championships.

Spirit from Jacksonville State University missed a spot among the top-12 finalists after scoring just 0.075 points under Toledo, Ohio’s Glassmen in the Semifinals. The remaining corps among the 17 semifinalists were Capital Regiment, Seattle Cascades, Colts, and Magic of Orlando.

Southwind finished in 18th place with its 2004 production titled, “A Journey Through the Sands,” set to Jerry Goldsmith’s score to the 1999 movie “The Mummy,” and Alan Silvestri’s score to that film’s 2001 sequel, “The Mummy Returns.”

The show took fans to the mystical land of ancient Egypt. To help convey the theme, the corps wore a silver Eye of Ra, a mythological sun disk that is one of the most prevalent images in ancient Egyptian religion, enclosed by a golden pyramid atop their shako headwear. Pyramids were also seen on the right legs of the color guard uniforms, cut out of gold ribbons that represented snakes slithering up the costumes.

Watch Southwind's "A Journey Through the Sands" on DVD

Dozens of forms that looked like Egyptian hieroglyphics (the ancient form of Egyptian symbol writing) were written into drill formations throughout the show, such as the opening “SW” set.

The turbulent blowing of desert sand was said by staff members to be sensed in the burst of notes in the opening segment “Sandstorm.” Accompanying flags of desert colors conveyed a sense of being engulfed in a pelting sand storm. Throughout much of the show, the music was enhanced by a large amount of ethnic percussion, adding to the sense of exoticism. 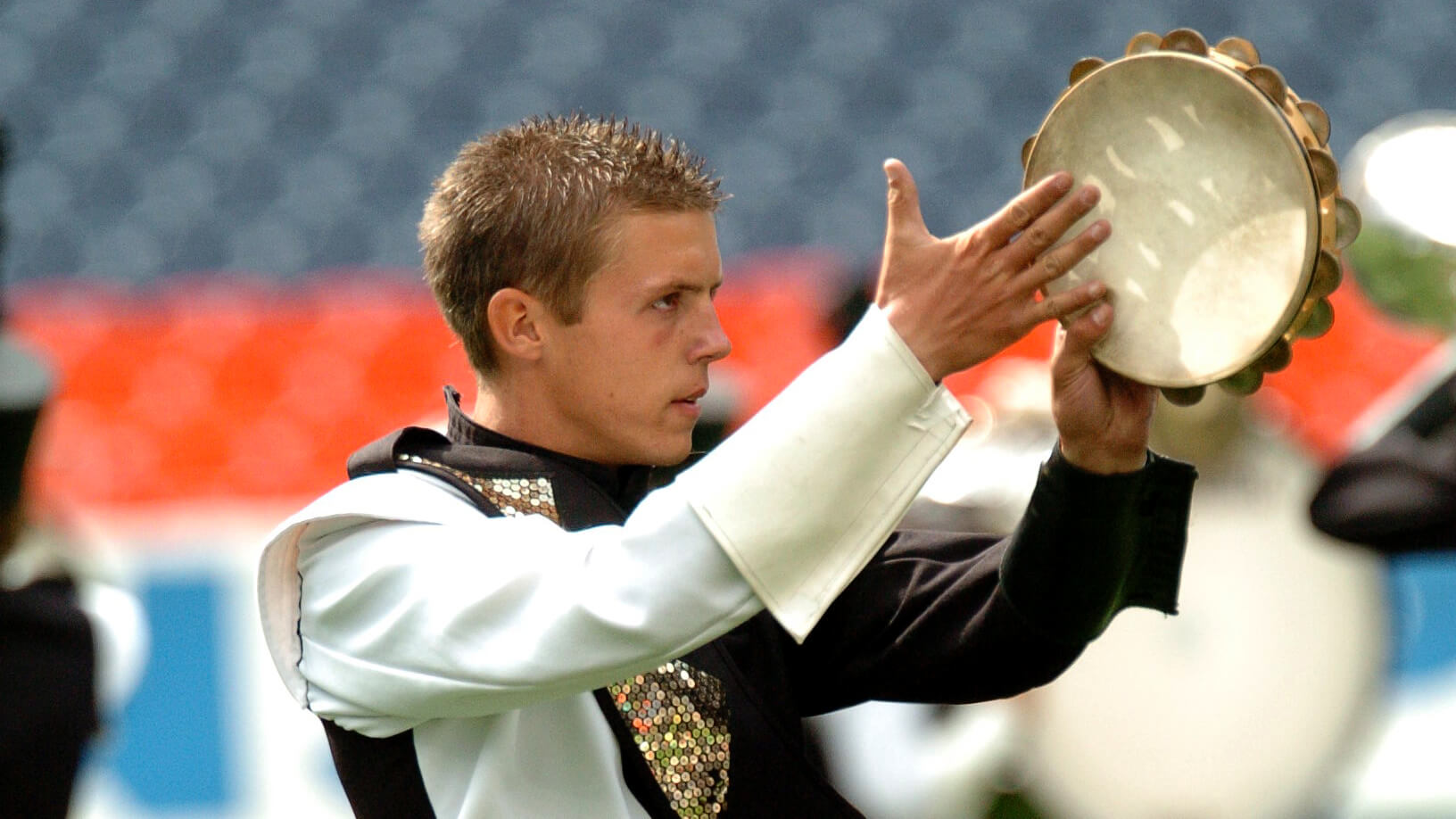 The festivity of the second piece, “Mirage and Dance,” was prefaced by Egyptian percussion elements in the front ensemble. The concept of the fugue was of traveling across the desert while hallucinating about things that weren’t really there. The myriad musical themes played at once was meant to play tricks on one’s perceived sense of reality. A double “S” form introduced a quartet of tambourine players, the form representing both the snake and the rippling of water at the mirage.

The color guard members interacted with the drum line during an extended percussion feature. Percussionists simultaneously played on the tenor drums by splitting up the featured drumming between the left hands of the tenor drummers and the right hands of the bass drummers. Those hands continuously wrapped around each other in an intricate display that had to be carefully worked out to avoid the arms of one performer getting tied in knots with the arms of the other. The feature ended in a drill formation of an angled cross rising out of a circle, the Egyptian glyph that stood for the word, “perfect.”

The corps interpreted a short and calming ballad called “Oasis” through fluid curves in the drill and large flowing flags of white and shades of blue. The flags inferred the water at the oasis that really did exist, unlike the imaginary water of the earlier mirage.

The closing number, “Pyramids,” started with several pods of brass players in block formations of inverted pyramids. The recurring snake theme was clearly represented by squiggly green forms on the flags.

Building intensity toward the end, a ripple traveled down a continuous curve of horns toward the unveiling of an advancing company front. That front was surrounded by the flags in a giant outline of a pyramid. An arc of horns was swallowed by other brass players in a rotating outline of a pyramid, the resulting ending form being one large block pyramid.

The trek through the desert ended at the base of that large edifice. The final moments of music were built from the ground up with layers of chords, one block of sound laid atop the other like the stones of the Egyptian pyramids.