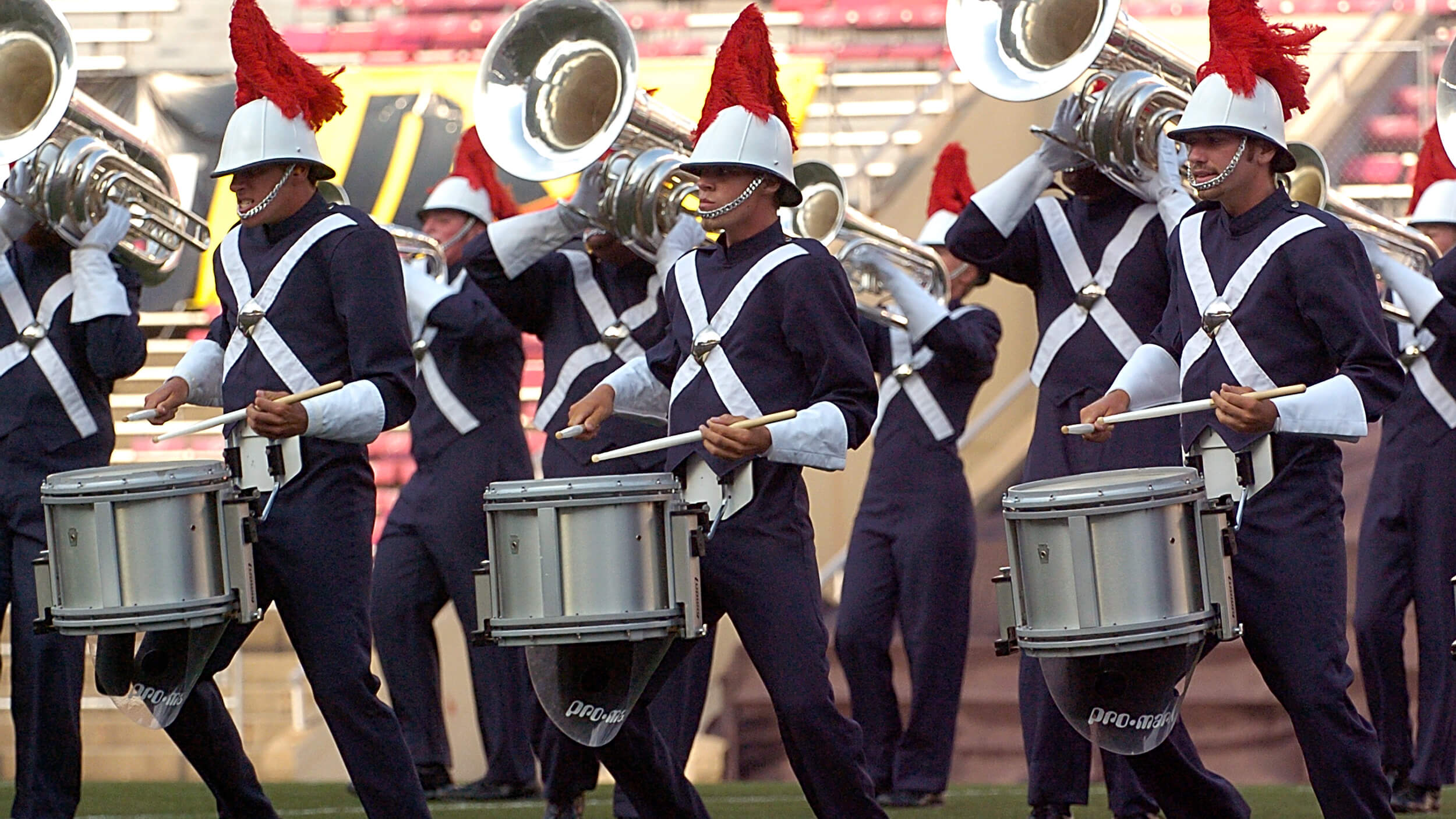 In 2006, the University of Wisconsin’s Camp Randall Stadium hosted the DCI World Championships for the seventh time, the first since the stadium underwent a significant modernization and enlargement.

Among non-finalists, Colts finished 13th for the second consecutive year, followed by Blue Stars in 14th, Crossmen in 15th, and Capital Regiment in 16th. Impressively, the 14th- to 16th-place Semifinalist corps scored within 0.65 points of each other.

This year, the Blue Stars successfully returned to Division I (now World Class) competition after more than two decades as a Division II & III (since combined to form Open Class) corps. From DCI’s inaugural season in 1972 through 1979, only Blue Stars and Santa Clara Vanguard placed in every Finals. Two years after placing 13th in 1980, the corps finished in 37th place, then moved to Division III for most of the seasons prior to 2004, when growing numbers allowed the corps to be competitive in Division II.

Blue Stars’ 2006 production, “The Gift of Freedom,” portrayed what U.S. President Franklin Delano Roosevelt stated in his famous “Four Freedoms” speech of 1941. Delivered as his eighth State of the Union address, 11 months before the attack on Pearl Harbor that forced the nation into World War II, the speech identified the American values as the freedom from want, the freedom of speech, the freedom to worship, and the freedom from fear. Roosevelt hoped his speech would rally the American people to be ready to rise up against the threat of the Axis powers of Germany, Italy, and Japan. More immediately, he hoped to encourage support for sending assistance to Great Britain and other Allied forces in Europe as they dealt with the scourge of Nazism and fascism on the European continent.

Watch Blue Stars' "The Gift of Freedom" on DVD

The show opened with a segment titled “Freedom from Want.” The corps set the first part to Aaron Copland’s “Grover’s Corners” from “Our Town,” a 1940 movie based on a Thornton Wilder play of the same name. Both play and movie explored the everyday lives of ordinary people in a fictional New Hampshire community. Copland’s film score came on the heels of his first work for the idiom just a year earlier, the same year as the premiere of his massively popular “Billy the Kid” ballet.

A Blue Stars narrator introduced the four freedoms, followed by the entry of the brass section and a building intensity into the form of a four-pointed star, heroically introducing the main theme from “Appalachian Spring.” 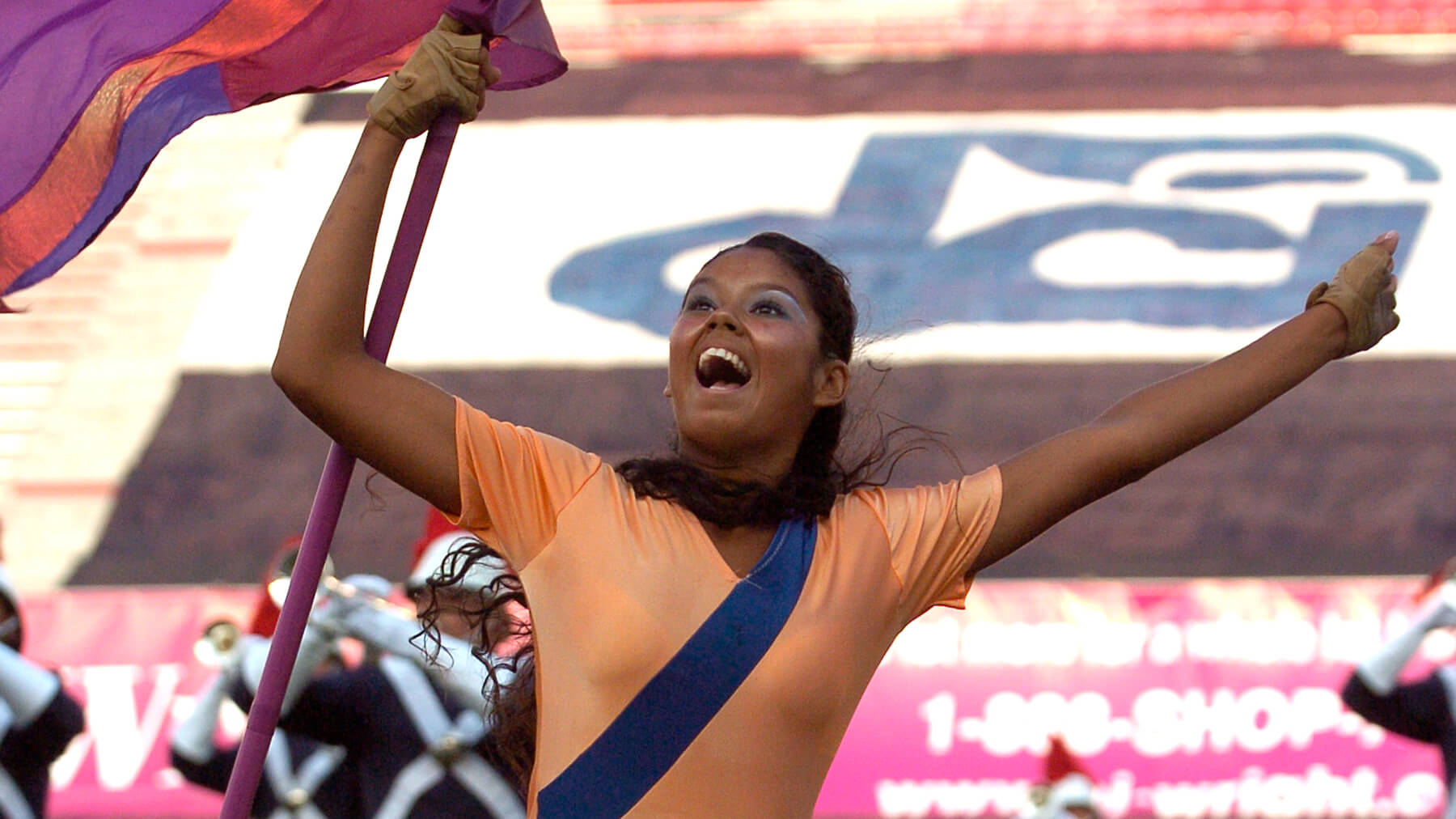 The Shaker tune, “Simple Gifts,” is the climactic keystone of Copland’s Pulitzer Prize winning “Ballet for Martha,” a work for 13 instruments written in 1944 for dancer/choreographer Martha Graham. She retitled the work “Appalachian Spring,” referring not to the season but to a water source described in a 1930 poem. Blue Stars’ rhythmically intense re-interpretation of the melody, loosely inspired by the Shaker hymn, served as the basis of the segment “Freedom of Speech.” This led into the corps singing the lyrics to the Shaker hymn prior to a big push of the movement’s ending.

Simple pioneer dress reflective of costuming Graham utilized in her choreography provided the inspiration for the Blue Stars color guard’s attire. The attire featured various pastels, accented by bright yellow flags with swirling swatches of purple, replaced with pale yellow flags emblazoned with the snippets of text from the “Four Freedoms” speech.

The next segment, “Freedom to Worship,” utilized a mashup of the reverent Advent hymn, “O Come, O Come Emanuel,” and the slow first movement of David Holsinger’s “Liturgical Dances” of 1981, said by the composer to reflect both emotional and spiritual bonds. Billowing white flags faintly enhanced with a variety of ecclesiastical images backed up the singing of a harmonized “Amen,” while a large open drill formation suggested a tilted cross.

The extremely short segment of “Freedom from Fear” incorporated Samuel Ward’s 1883 church hymn melody, “Materna,” which became better known as “America the Beautiful” in 1910 after being set to a 1895 Katherine Lee Bates poem. This segment rapidly evolved into the quick and vigorous “Freedom to be Free” finale, compiled from melodies heard earlier in the show, with a hint of “The Star-Spangled Banner” thrown in for good measure.

Toward the end of the show, vibrant flags with patches of intense reds and purples were exchanged for flags styled on an abstracted image of a billowing American flag. A return to the four-pointed star—seen in outline form—appeared just prior to the end of the show.

Upon conclusion of the production, few doubted the Blue Stars could be heading back to being a solid DCI powerhouse. The corps replicated its 14th-place finish in 2007, and in 2008 the corps returned to the World Class Finals, finishing eighth for three seasons in a row.