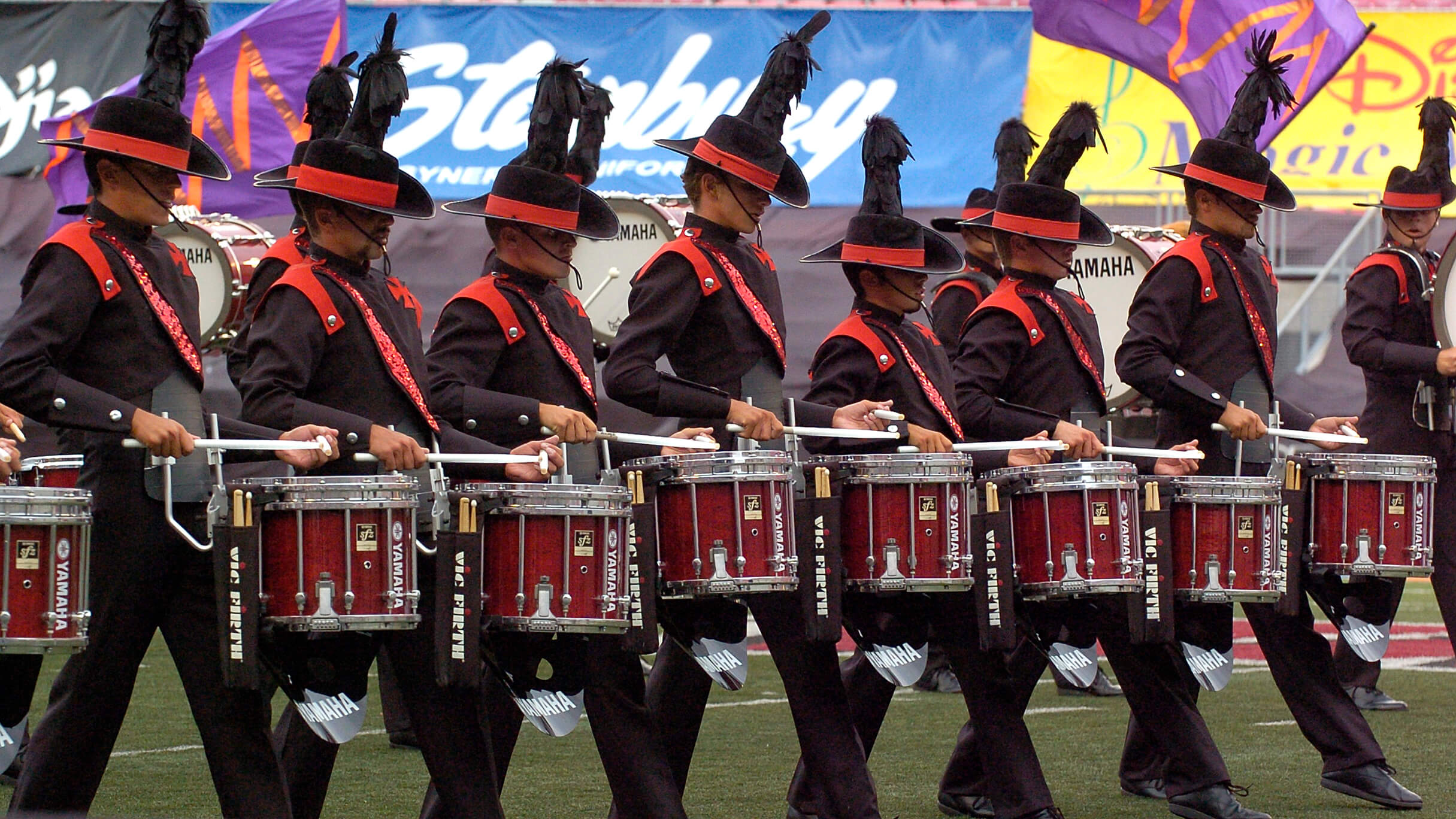 The 2006 Drum Corps International World Championships returned to the newly modernized and enlarged Camp Randall Stadium in Madison, Wisconsin for the seventh time, two weeks after all Division I corps stopped at the first-ever DCI Southeastern Championship in Atlanta.

Earlier in July, many corps were forced to curtail rehearsals when vast areas of America’s heartland experienced record-setting days of 100-plus-degree temperatures.

Back in 2006, only 17 corps moved on to the Semifinals competition from Quarterfinals. The last corps in Semifinals, Mandarins, prevented Southwind from repeating as a Semifinalist by just under a half a point. 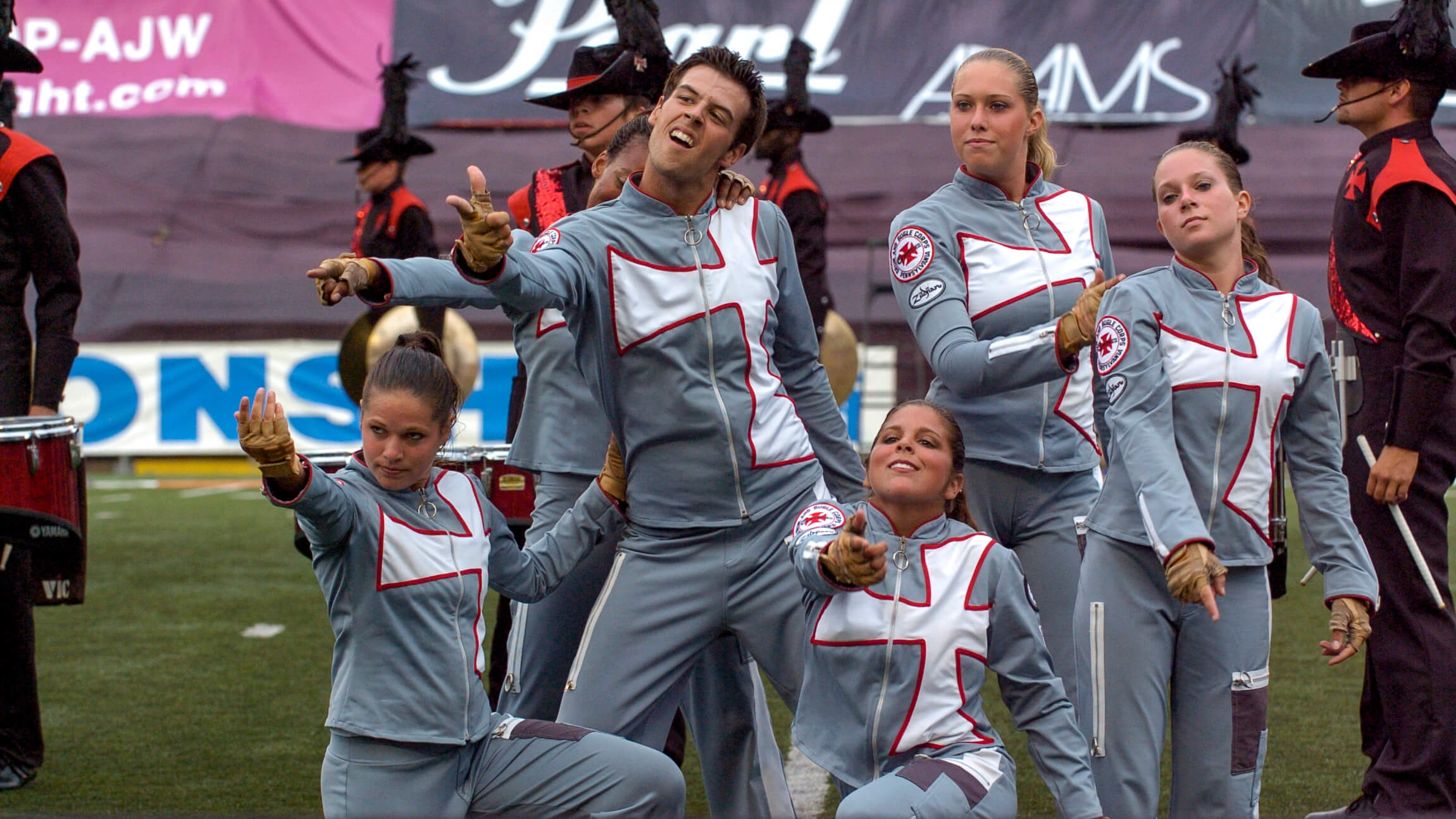 In their final season before relocating to San Antonio, Crossmen sat two spots above the cutoff in 15th place. The corps’ production, “Changing Lanes,” on one level referred to traveling the roads across the United States of America, but on another level referred to the personal journeys that end up changing us as individuals. Akin to scanning through the local radio stations, the corps brought a shifting variety of musical styles to the forefront.

The first movement, “Departure,” utilized the piece “Prelude to a Drive,” a brief opening fanfare composed by corps brass arranger Andy Yozniak and very loosely based on the rhythmic underpinnings of John Adams’ “Short Ride in a Fast Machine.”

The voyage began with the sounds of car ignition and the sight of color guard members trying to engage the clutch and pump the gas to start up the vehicle. This culminated with the corps forming a cutaway side view of the front of a car, complete with a rotating tire.

Crossmen design staff based the next segment titled “Crusin’” on “The Way Up, Part III” off of the 2005 68-minute-long composition that won the Pat Metheny Group the 2006 Grammy Award for Best Contemporary Jazz Album.

The sound of a ticking alarm clock introduced a morning drive DJ voiced in the front ensemble percussion section who came on air to deliver a traffic report. Flags primarily of bright orange and green woke up the senses, as commuters needed to be aware to deal with the rush hour accident that was announced next. At this point color guard members picked up new flags that were solid gold when spun facing front and solid red when spun in reverse.

After hearing of another accident, a DJ said, “Let’s go airborne with Angelo,” who humorously delivered the report while repeatedly quickly hitting himself in the chest to create the effect of being in a helicopter. 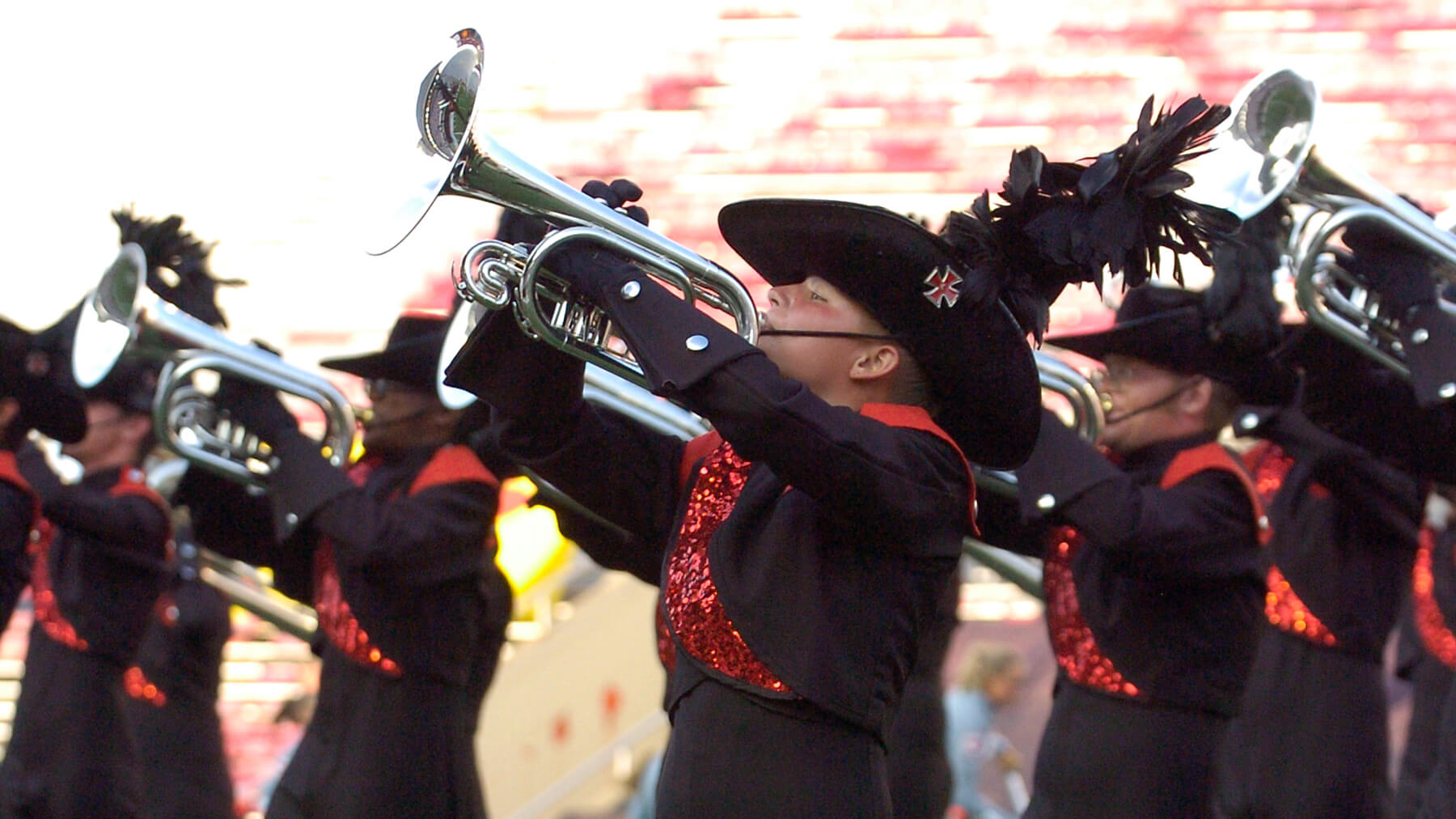 The next segment titled “Radio” found the driver rapidly scanning the dial across a variety of stations to find something to listen to while sitting in the traffic jam, with the sound of static filling in the seconds between the reception of a new station. For you youngins out there, older radios had dials instead of digital buttons, and when one turned the dial, one would hear static between the stations until they were perfectly tuned in.

“Radio” became the centerpiece of this 2006 production and the first thing fans who saw the show live would generally recount years later. The dial passed by a brief seconds-long snippet of Neil Diamond’s “Sweet Caroline” and then breezed past the weather report, which predicted thunderstorms as a handful of umbrellas opened. The dial settled on the introduction to the overture of Wolfgang Amadeus Mozart’s 1786 comic opera, “Marriage of Figaro,” then continued on to Michel Camilo’s “Caribe” from his 1994 album, “One More Once.”

A commercial for “finding the hottest singles in your area” interrupted the channel surfing, as did an introduction of a hot Latin song narrated in Spanish. Other short snippets of songs followed, including the Eurodance hit, “Every Time We Touch” by the German techno trio Cascada. A victory march came to the forefront as the driver stopped on a sports station, hearing the announcer proclaim the University of Wisconsin football team crushing their Ohio State opponents. The corps formed a marching band parade block as strains of “On Wisconsin” were unmistakably heard, playing to locals in the Camp Randall stands.

A snippet of Steppenwolf’s “Born to Be Wild” originated in the 1969 movie “Easy Rider,” one of most quintessential movies about traveling across the country. It quickly wrapped up “Radio” and introduced an announcer telling us that lots of listeners were calling into the station to say they were stuck in traffic. The DJ introduced the “Longing” segment by sending out a song dedication to all drivers, wishing them to arrive home safely.

This segment featured “If I Had My Way,” written by Broadway composer Frank Wildhorn and his lyricist Jack Murphy. Linda Eder sang the song on her album, “Gold.” Eder, who won the 1988 talent show, “Star Search,” released the song as a tribute to the victims of the September 11, 2001 tragedy. Picking up on the piece being the emotional heart of the show, the individual light green flags spun by color guard members featured the name of each of their hometowns.

Experiencing homesickness, the corps took a “Shortcut Home,” the final segment of the show. Music was based on “Tank,” off the 1970 album, “Emerson, Lake & Palmer,” which the British progressive rock group released at a time before they had yet to perform live.

Eager to get home as quickly as possible, the piece accelerated until everyone was back in the comfort of their own dwelling, their own bed, and the place that best welcomed their hearts.