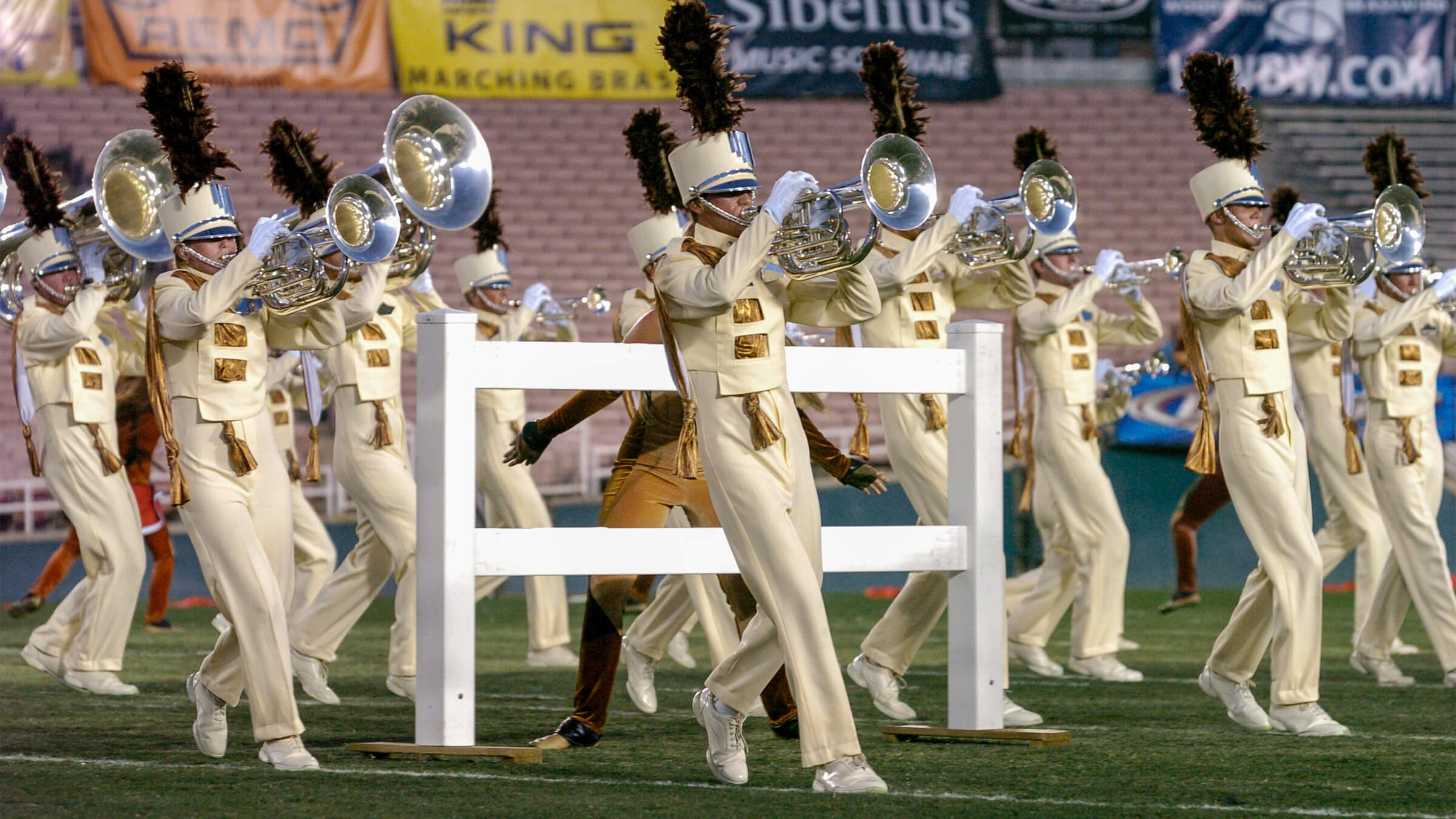 It had long been planned that the DCI World Championships would head "west of the Rockies" at some point. That it took 35 years to do so made it all the more special when it finally did in 2007, especially since the event was held in the venerable Rose Bowl, familiar to fans of televised college football games.

The Blue Devils won their 12th DCI title by .975 points after barely squeaking by The Cadets in the Semifinals. There seemed to be more tight races than normal for much of the season: The Cavaliers had previously topped Blue Devils once and The Cadets three times, and just a week before the World Championships, Cadets defeated Blue Devils at two California shows by a combined total of just 0.325.

Bluecoats, who had beaten every other corps at least once and still finished in seventh place at the World Championship Finals, best exemplified the tightness of the competition that season. The corps' seventh-place score was just 0.125 out of fifth place and 0.80 out of fourth, giving the corps the highest seventh-place score ever achieved in the history of DCI World Championship Finals.

2007 was also notable for the 11th-place Colts earning a spot in the Finals for the first time since 2001.

Carolina Crown's sixth-place production, "Triple Crown," was easily one of the year's audience favorites and as such it was presented the coveted Spirit of Disney Award. With a color guard that secured second place at the Finals, the corps' story of a herd of wild horses losing its collective freedom and then being trained as race horses was at first tender and ultimately exhilarating.

Part I: "Stampede," commenced with members of the corps pawing their "hooves" on the ground as the horses grazed to the sensitive strains of John Debney's "Theme from 'Dreamer,'" from a 2005 movie about the love a trainer and his daughter had for an injured racehorse threatened with being destroyed.

Setting the theme visually, brown plumes and brown scarves adorning the uniforms conveyed the sense that the corps' members were themselves taking on the roles of being horses. Even the shells of the drums were brown. The color guard performers, however, most exemplified the theme. Attired in colors of various horse breeds with tails hanging down the backs of their costumes, the female members of the guard all had long hair like the mane of a horse while the guard's males had their hair cut in a Mohawk. 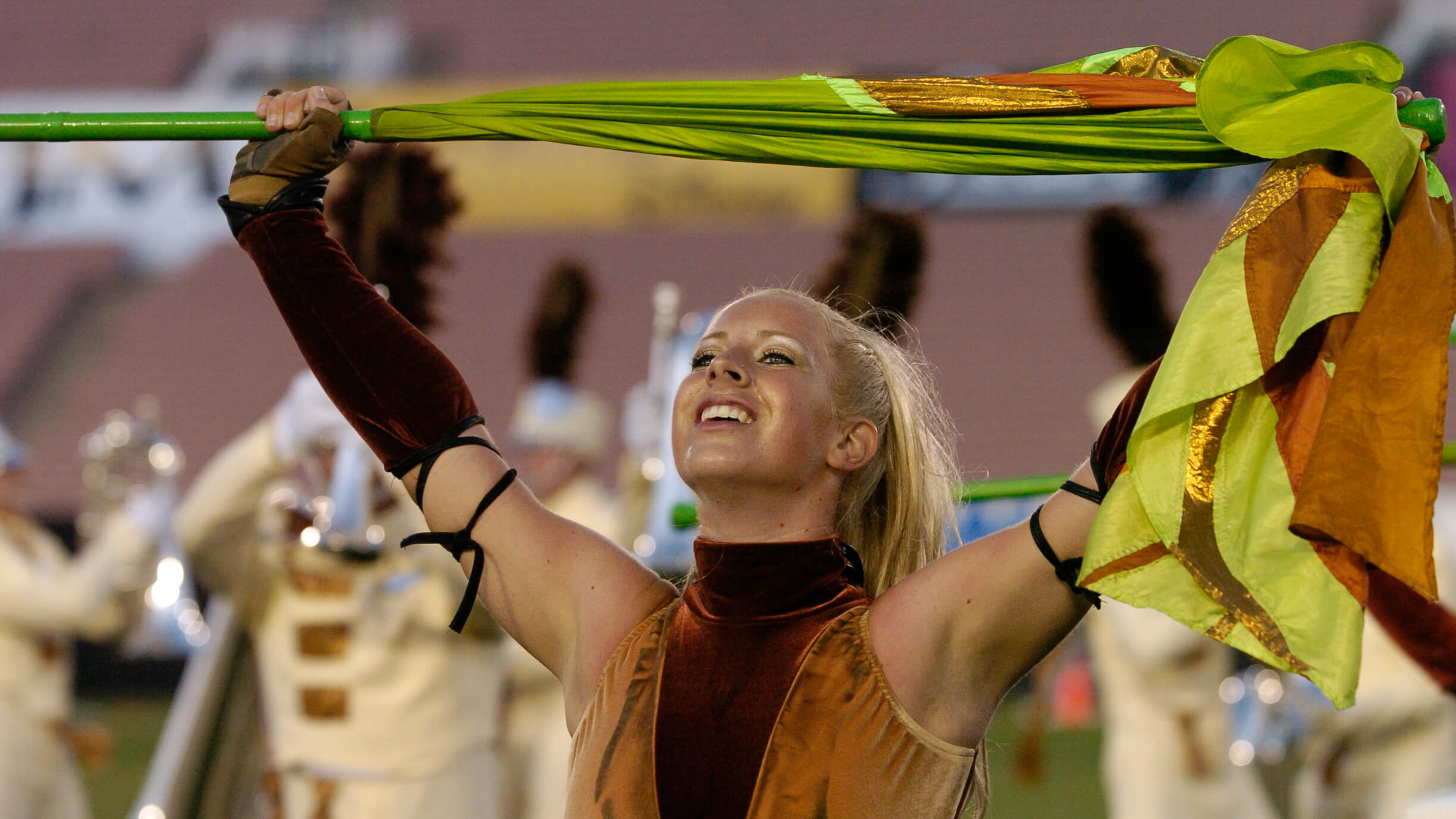 The color guard section swept down to the front of the field during the stampede, and if one listens intently, a short four-count riff in the marimbas introduced the main theme to "William Tell Overture," which would be heard in its fuller form at the end of the show.

The stampede led into James Newton Howard's "The Trap," from the 2004 film "Hidalgo." That movie, starring Viggo Mortensen in his first role after the three mega-successful "Lord of the Rings" movies, was about a cowboy who traveled to Arabia in 1890 with his trusty steed to compete in a treacherous cross-desert horse race. The very end of the explosive piece concluded with the horns reiterating the short riff based on "William Tell Overture."

Part II: "Training," represented a proud horse losing the only freedom it ever knew, to the strains of "Wild Horses" by Mick Jagger and Keith Richards of the Rolling Stones. Richards was quoted as saying the song from the band's 1971 album, "Sticky Fingers," was about, "being a million miles from where you want to be," which may certainly capture the sentiments of any captured horse. At the end, all the horses are held captive in the loop of a lasso created as a drill formation by the horns and drums.

Next in the repertoire, "Happy Ending," from Aaron Copland's "The Red Pony," was about training the horses to race. Copland wrote the music for the 1949 film based on a novella by John Steinbeck that was published in separate episodes between 1933 and 1937. The score to "The Red Pony" was commissioned by the Houston Symphony Orchestra as an orchestral suite and actually premiered a few months before the movie was released. It remains one of the most enduring works in Copland's discography.

Part III: "Day of the Race," started with the evocative chorale of John Debney's "Manny's Story" from "Dreamer," capturing the sun (seen as a pink crescent poking over the colors of the plains) rising over the training field on the day of a big race. This short segment ended with a solo trumpet proclaiming, "First Call," the bugle motif long associated with the start of a horse race.

With pieces of corral fence on the field, the introduction of Giocchino Rossini's "William Tell Overture" kicked off one of the most delightful presentations ever witnessed on the field. The overture is from the last of Rossini's 39 operas, premiered in 1829 before the composer entered semi-retirement. The finale of the overture, "March of the Swiss Soldiers," has long been associated with horses and famously became the theme to "The Lone Ranger," a radio series that started in the 1930s and became a television series from 1949 through 1957. Interestingly, there were no horses alluded to in the opera, which was about life in the Swiss Alps. 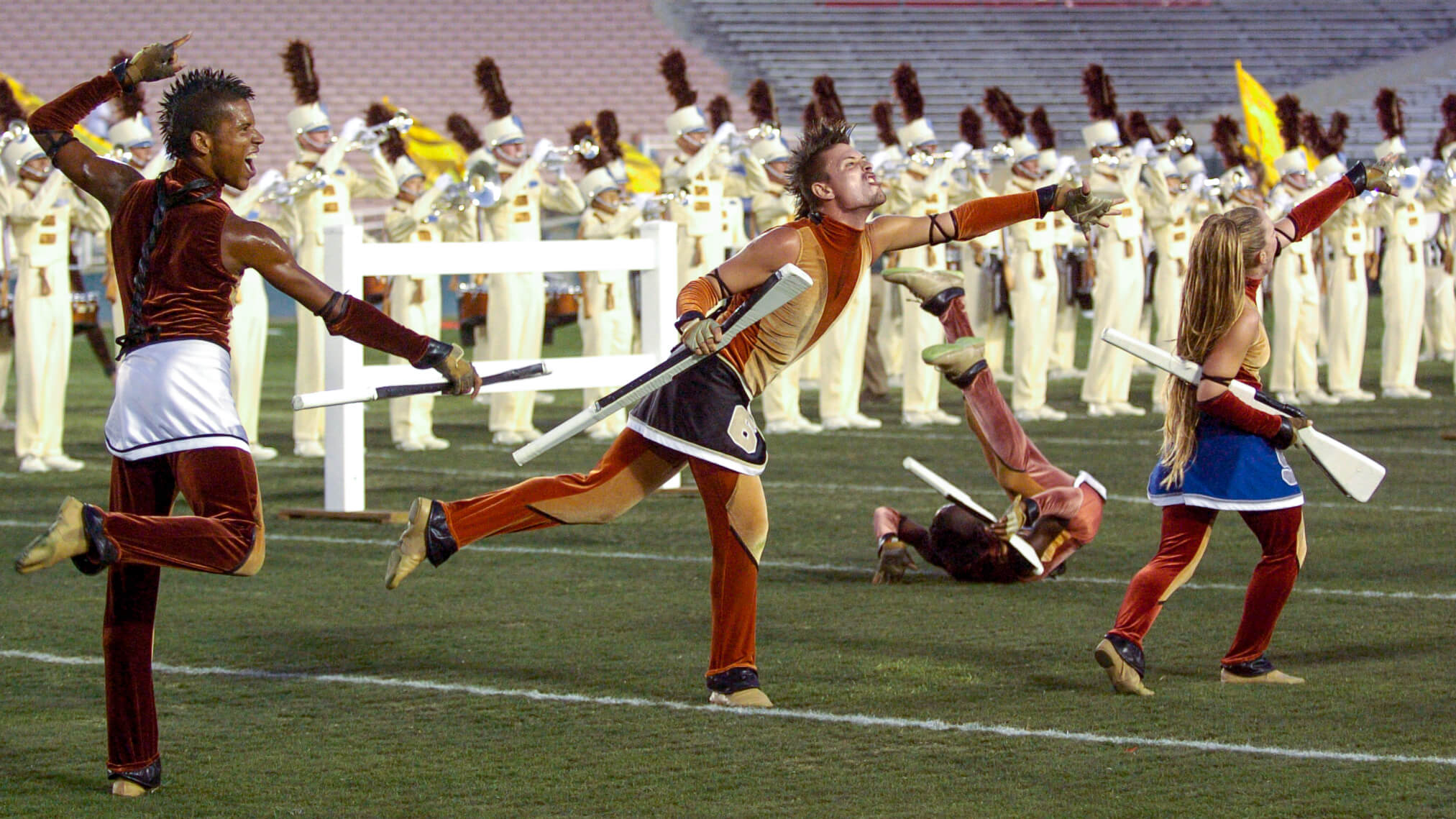 Each of the 12 color guard section's rifle bearers was adorned at his or her waist with a racing silk saddlecloth in a color of one of the corps' main competitors, each a finalist in the 2006 DCI World Championship Finals.

The bell rang and the "horses" were off for a jaunt around the “racetrack.” Although the narration is remembered as an integral element in this show, it wasn't until the final minute of the show that we heard the track announcer proclaim, "And down the stretch they come!" He continued to allude to nicknames for all the top corps as the names of the other racehorses.

A brief few silent moments, where everything went into slow motion as the horses approached the finish line, saw horse number eight—the one named "Crown"—break out to the lead in a photo finish.

John Debney's "Last Race" from "Dreamer" provided the final moments of victorious acclamation, as the corps formed its trademark Crown logo. The winning horse was decked out in the traditional garland/victory wreath of roses presented to the winner of the Kentucky Derby, especially appropriate considering the stadium in which the fictitious race was held.