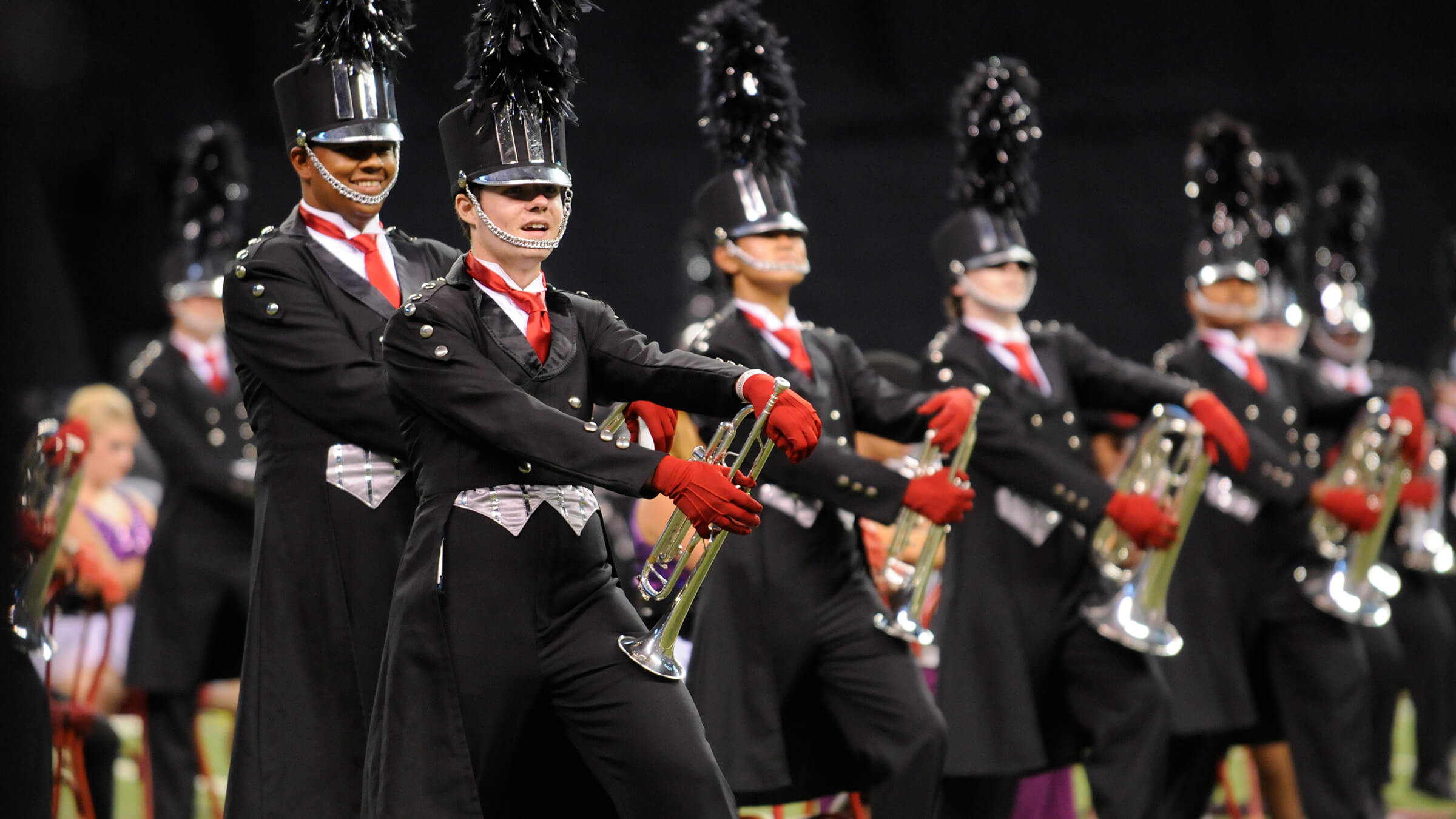 2013 The AcademyPhoto by: Drum Corps International

Some unexpected excitement descended upon the 2013 Drum Corps International World Championships in Indianapolis.

Troopers, in 14th place and 1.90 points under the 12th-place Blue Stars in Prelims, surged into the Semifinals to finish 13th, just 0.15 points out of Saturday’s Finals competition.

One could watch Troopers’ “Magnificent 11” show 11 times and never catch all the times the numeral 11 was worked into the drill formations. Crossmen’s 14th-place “Protest” show reckoned back to the upheaval of the 1960s, while Colts’ 50th anniversary celebration of “Field of Dreams” referenced both the corps’ origins and the famed movie set in the corps’ home state of Iowa.

In 19th place, eight points down from a spot as a finalist corps, The Academy brought “Pianoman” to the field. The production encouraged audience participation in the performance of music written for piano and the cabaret.

Pianoman also served as the name of the emcee character that welcomed all with a hearty “Willkommen” to “Café Academy” during the opening segment, during which he introduced his cohort, the vivacious feather boa-wearing Lola. Piano keys on the color guard members’ flags and cabaret costuming further drove home the theme.

The opening of “Willkommen” came from the introduction of “Cabaret,” the 1966 John Kander and Fred Ebb Broadway show that won Tony awards for best musical and original score. 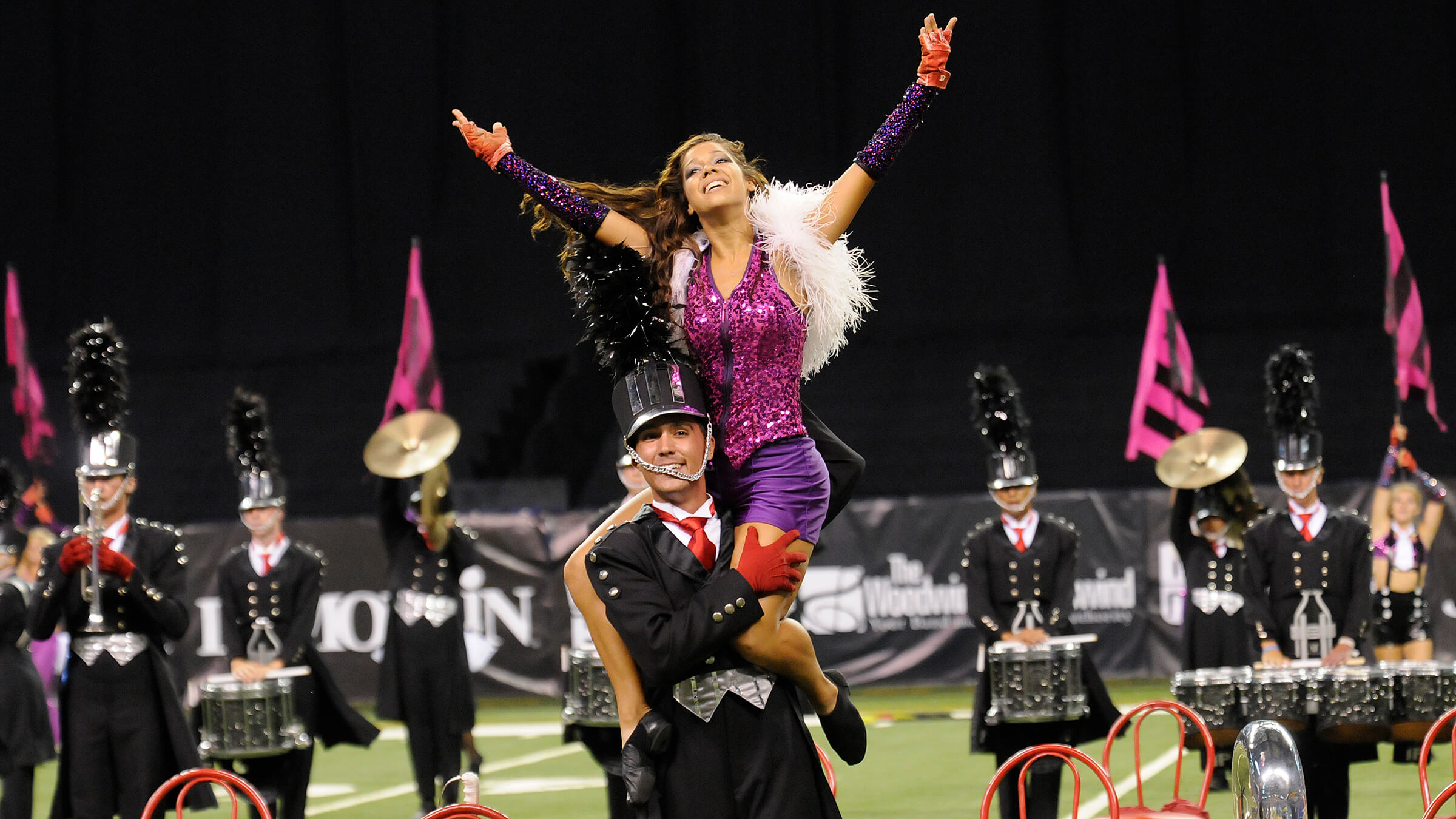 While the musical focused on the 1930s era of the Nazi Party coming to power in Berlin, the pure escapism of Academy’s show intentionally avoided projecting any deeper meaning other than pure joy. A trumpet soloist playing the melody opened the musical part of the production, accompanied by flags of light purple with four inserts of dark purple, suggesting the keys of a cabaret piano in a purple-hazed smoky theater.

The Doors and David Bowie both covered Kurt Weill’s “Alabama Song,” written for the 1927 play, “Little Mahogany.” Interspersed with a little honkytonk piano and some brief narration, the corps turned the formerly depressing song about desperately needing whisky into an upbeat production that continued in the spirit of the lighthearted buoyancy of the production.

Famed singer/actress Marlene Dietrich originally performed the waltz-like ballad of Frederick Hollander’s “Falling in Love Again” in the 1930 film, “Der Blaue Engel (The Blue Angel).” The Beatles also covered the song in 1962 in a rock n’ roll style. Opening with a flugelhorn solo, the selection served as a sonic respite prior to building the intensity. This led into a mellophone solo and a fight for the affections of Lola between two members of the horn line, ending with Pianoman attempting to break up the skirmish and ducking just in time to avoid being struck by a slap administered by one of the hopeful suitors to the other.

Written by Dmitri Shostakovich in 1957 for his son’s 19th birthday, “Piano Concerto No. 2, mvt. 1 (Allegro)” reached a wider audience when utilized in the Disney film, “Fantasia 2000.” This rollicking selection may have at first seemed unexpected for The Academy’s cabaret show, but its upbeat and spirited whimsical nature made it intriguingly effective, ending with the brass players falling to the ground in exhaustion.

The corps’ closer of “Piano Man” came off Billy Joel’s 1973 album of the same name. The lyrics conveyed Joel’s real-life perspective as a lounge pianist in Los Angeles, focused on the clients he met during that period. After a tender introduction by Academy’s horn line, Pianoman encouraged everyone to sing along in a spirited rendition of the song’s chorus.

Following the mass singing, red flags with images of black and white piano keys, just like the layout of a piano keyboard, brought the show to a rousing conclusion as the horn line spread across 80 yards for the final sonic blast.