The World's Most Accurate Drummer contest, presented by Beatnik Rhythmic Analyzers, brought its trademark test of percussion prowess to Atlanta this past weekend. Many contestants visited the Beatnik booth to pick up a pair of sticks and see how accurate they were as measured by the drum pad's sensors, but only one could be crowned the World's Most Accurate Drummer. The sharpest chops of the evening belonged to Brad Martin, a percussion instructor from Sevier County, Tenn. Martin attended the DCI Southeastern Championship to see four of his students who are marching this summer as members of the Pioneer. 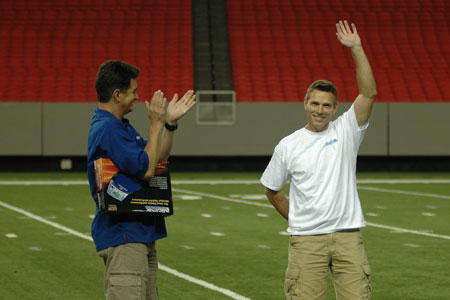 Brad Martin (R) is named the World's Most Accurate Drummer in Atlanta.
"I was kind of nervous about it," Martin said after winning the contest, posting a score in the high 600s, out of a possible 800. "I get kind of anxious when it's a competition thing, but it turned out to be okay." 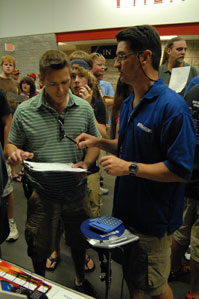 Martin gets ready to compete at the
Beatnik booth in the Festival Marketplace.
The contest has participants play an unchanging two-bar rhythm for two minutes on the official Beatnik Rhythmic Analyzer electronic drum pad. Then a score is awarded, calculated with accuracy to the nearest 512th note. Martin was presented with a Beatnik Rhythmic Analyzer of his own to take home. No stranger to the device, having used one before competing in the contest, he praised the Beatnik's utility and instructional applications, saying, "It's an excellent tool. It can help your playing in so many different ways. Everything from accuracy to [stick] levels, velocity ... I think it's an invaluable tool for teaching." Martin holds a degree in studio music and jazz percussion from the University of Tennessee and performs and instructs in Tennessee. "I teach at Sevier County High School, I teach the drum line, and I do private lessons there as well, so this will be an invaluable tool for that." Fans headed to the Drum Corps International World Championships in Bloomington, Ind. will be able to try out the Beatnik Rhythmic Analyzer for themselves when the World's Most Accurate Drummer contest makes an appearance there in the Festival Marketplace. Keep your eyes open and your hands warmed up! Learn more about the Beatnik Rhythmic Analyzer at Tuners.com.