The Cavaliers are pleased to announce the appointment of current director Jeff Fiedler as the full-time director of the corps. Fiedler, 47, has directed the Cavaliers as a 'part-time' position since September of 1990 after taking the reigns from Adolph DeGrauwe who had led the corps for 10 years. 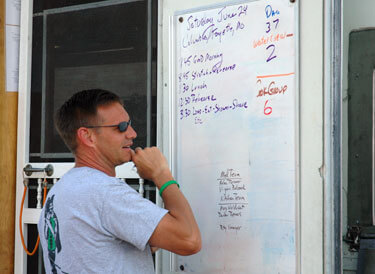 Jeff Fiedler sets the corps' schedule on tour this summer in Columbia, Mo.
His full-time position had been as a teacher and then later as an administrator at St. Francis de Sales High School in Chicago, since the fall of 1987. He also is the current chairman of the Drum Corps International board of directors and had been serving as the president of the Chicago Archdiocesan Marketing Association since 2003.