What corps are you in and what is your role this summer? I am a member of the Madison Scouts, and I will be playing lead trumpet in the horn line for my third year.

Where I go to school and what I'm studying: I am currently attending the Univeristy of North Texas majoring in music performance.

Give us your full drum corps/marching music background. I marched four years with the Creekview High School marching band. In the summer of 2001, our band went to a drum corps show in Dallas, and I saw the Madison Scouts there. I was instantly hooked. In 2003, I tried out for the corps, and I made the soprano line. Since then, I was a Madison Scouts member in 2003 and 2004, and I took off last summer to complete college courses so I can march 2006-2008. 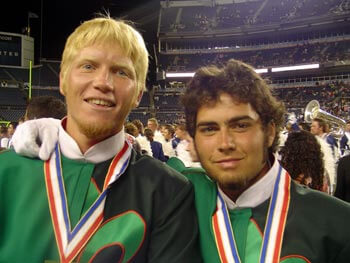 Peter Dougherty and Travis Peterson at the 2004 DCI World Championship
What's your practice schedule like? I usually practice about two hours in the afternoon and a couple hours after dinner.

What does your ideal free day consist of? Doing lots of nothing and eating junk food.

In the shower you can hear me singing: 1995 Madison Scouts opener.

The last good book I read: "Blade Runner" for an English class.

Jobs I have/have had: I work at a department store in a mall part time.

What has been your formative drum corps moment? Finals in 2004, being in that huge stadium and seeing everyone rise to their feet before the end of our show. What would you be doing next summer if you were not marching? Taking lots of classes and working.

How did you decide to be a member of your corps? I saw the Madison Scouts' 2001 show and the presence that the corps and its members have on and off the field really made me want to be a part of the organization.

What first attracted you to the drum corps activity? My high school band director would always pick our shows from drum corps programs. We played 2000 Cadets and 2000 Cavaliers my sophomore and junior years. He would play the DVDs on the TVs in the band hall, and I always wanted to be a part of that.

What advice would you give to young people who want to march? Don't think that you're not good enough. I auditioned when I was 16 and really had no expectations going into my audition. Only you can make yourself go to a camp and see what happens. You never know what qualities a staff might be looking for. Take the first step and go out and try.

Favorite drum corps personality and why: Sal Salas is one of the most caring and creative individuals that I have had the pleasure of talking with and being around for two summers.

Best drum corps show ever and why: I really don't have a best show. Just pick any Madison Scouts show ever or any of the past Blue Devils' shows.

The year is 2030. What does a DCI show look like? "March-o-Vision." People in the audience have 3D glasses on, and the forms the corps are making start popping out at the crowd. There is a new box added to the judging system, box six, based on overall effectiveness of the use of March-o-Vision.

Feel free to add anything else you'd like. I can't wait to get back on tour with all my brothers this summer. It is truly going to be amazing. MYNWA.