Whether or not they'll admit it, every drum corps person is ready to come home at the end of the season. After a summer spent in buses and school gyms, even the lowliest college dorm room feels like a resort spa with cold air conditioning, hot, abundant water, and fluffy soft bed. And it's pretty cool having your parents cater to your every whim and grinning as all your friends go ga-ga over your thin, muscular physique and deep tropical tan. But as with all good things, by the third day home, a lot of the luster has worn off. After the first wave of exhaustion has passed, you just can't get comfy in that soft bed. (Personally, I always spent at least a week sleeping on the floor or the couch once I got off tour.) And in the non-drum corps world ... the shower is a really lonely place! One day is enough to catch up on any summer reruns that are worth catching up on, and even the most high-tech computer games become mundane after a couple of days of non-stop button pushing. 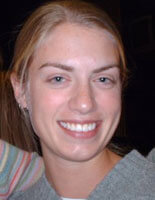 Emily Tannert
And then there are the less fun parts of being back in the real world: School. Work. Having to make ends meet. If you're really unlucky, you go home and straight to band camp on the Monday after Finals, which is bittersweet: you get to march, but as much fun as it is, marching band isn't drum corps – and band camp isn't the fun part of marching band anyway. Call it the grass always being greener, but it only takes about 10 days for the average drum corps person to be ready to go back on tour. Yeah, we're all ready to come home, but home is the same every day. As strange as it sounds, waking up in a new city – even on a bus at 4 o'clock in the morning – has a certain level of exotic excitement to it. And home doesn't have thousands of screaming fans, and most importantly, being home doesn't involve performing a show every night. Let's be honest, it's the rush of performance that we're all hooked on. Getting fruit punch out of a spigot on the side of a truck every day is just a nice sideline. OK, maybe I lied. Most importantly, home doesn't have 134 of your closest friends. Don't get me wrong, the eight or 10 that are there are awesome, and it's great to see them after a summer away, but there's something about drum corps that changes you in a way that non-corps members have a hard time understanding. Maybe it's that line that separates the people who aren't crazy enough to spend money to get their butts kicked all day, every day, all summer long, and the people who are. Maybe it's just the sudden appreciation of soft toilet paper! But whatever it is, even the company of friends suddenly feels like a slightly lonelier place. It takes having another corps person around to make you truly feel understood. Last week I went to dinner with a group of good friends, one of whom aged out just a couple of weeks ago. We started talking about the 2006 Summer Music Games Tour – placement on Finals night, who had the best drum line or the most difficult pit book, which shows rocked and which we didn't like – and suddenly the 10 other people at the table didn't even exist. We were lost in our own little tour-centered world. He talked a bit about his show on Finals night and what it meant to graduate from his corps, and gradually his gaze drifted till he was staring at nothing but his memories. "I really miss it," he told me softly. "I really miss it."