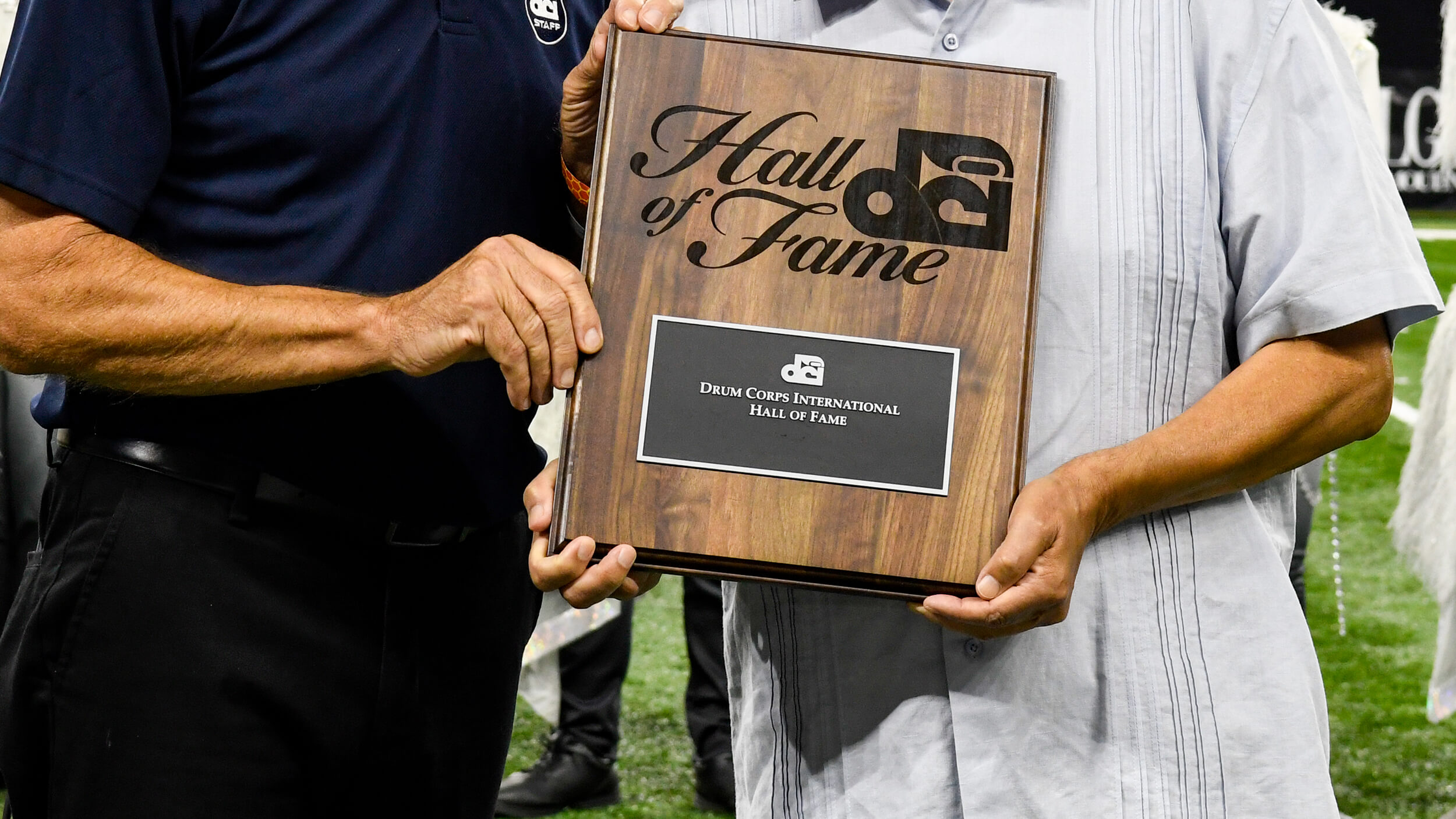 Members of the DCI Hall of Fame Class of 2022 will be inducted during a virtual ceremony held this August.Photo by: Drum Corps International

Joining the DCI Hall of Fame ranks in 2022 will be Bret Kuhn, Gary Markham and Richard Saucedo. They will be honored as part of the 2022 DCI World Championships this August in Indianapolis and as part of a virtual induction ceremony taking place Sunday, August 7. 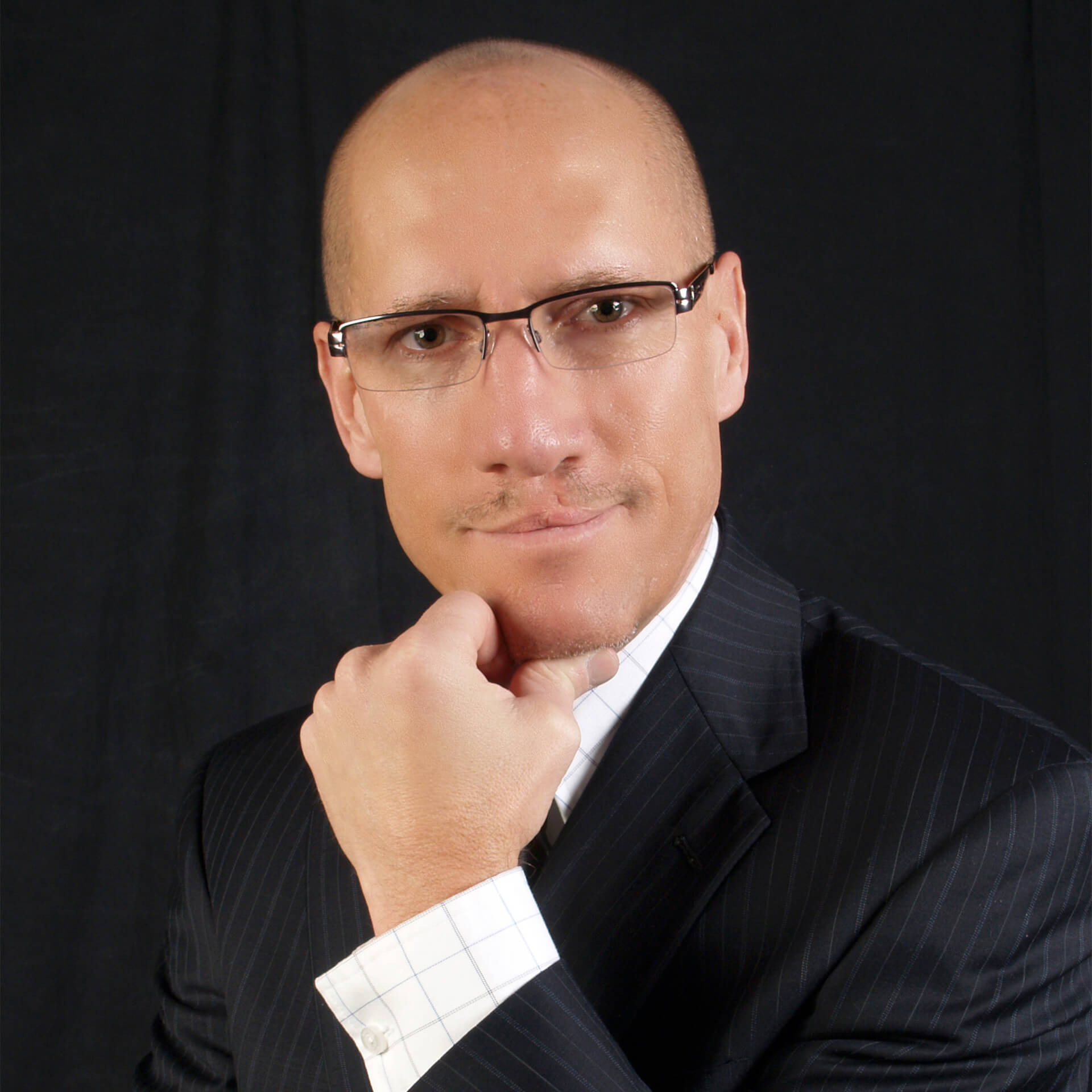 Through the height of The Cavaliers’ successes in the 1990s and early 2000s, Bret Kuhn served at the helm of the corps’ drum line.

An “age-out” member of the corps’ percussion section in 1981, three years later Kuhn got his start on the Green Machine’s staff. He worked his way to percussion caption head and served as an integral part of the group’s instructional and design teams until 2005. During his tenure he helped the corps achieve incredible success, to the tune of six DCI World Championship titles and five high percussion caption awards.

In 1999 on the verge of one of the most incredible competitive runs in the history of Drum Corps International, Kuhn additionally assumed duties as battery percussion arranger of the Rosemont, Illinois corps. An innovator and as a creative sounding board to his fellow design team members, he collaborated on some of the most memorable productions of all-time with The Cavaliers from “Niagara Falls” to the James Bond-inspired “007.”

Beyond his talent for putting notes and rhythms on a musical staff, perhaps Kuhn’s greatest contribution to the marching arts has been thanks to an incredibly sincere and personable demeanor that’s allowed him to foster the best efforts of his colleagues and students while expertly molding the future teachers and leaders of tomorrow.

“Some years we won championships. Other years, we did not,” said DCI Hall of Fame member Michael Gaines who worked with Kuhn for many years at The Cavaliers. “Regardless of our competitive measure of success, Bret was always measuring success through the lens of the education and the wellbeing of the young performers. His students were his priority as well as the reason for why he worked as hard as he did.”

“He taught with passion and respect for his players, developing them musically and professionally,” Koter said. “I loved watching him run around the field in rehearsals effortlessly praising and gently redirecting the players with noticeable improvement on the very next repetition.”

According to University of Kentucky professor James Campbell, who was inducted into the DCI Hall of Fame in 2008, one of Kuhn’s proudest achievements was having former Cavaliers members on almost every staff of the top-15 DCI corps by the year 2000.

“Bret inspires those under his direction to reach their highest potential,” Campbell said. “His life-long passion to share music with young people and audiences around the world has left a lasting impression on countless students and colleagues he has crossed paths with.”

After his time with The Cavaliers, Kuhn served in a number of roles for other corps including the Bluecoats, Colts and Phantom Regiment before returning to The Cavaliers in 2018. Internationally recognized as a teacher and arranger, Kuhn has served on the board of directors of the Percussive Arts Society and regularly represented and presented on behalf of such corporations as Yamaha, Zildjian, Remo and Innovative Percussion. 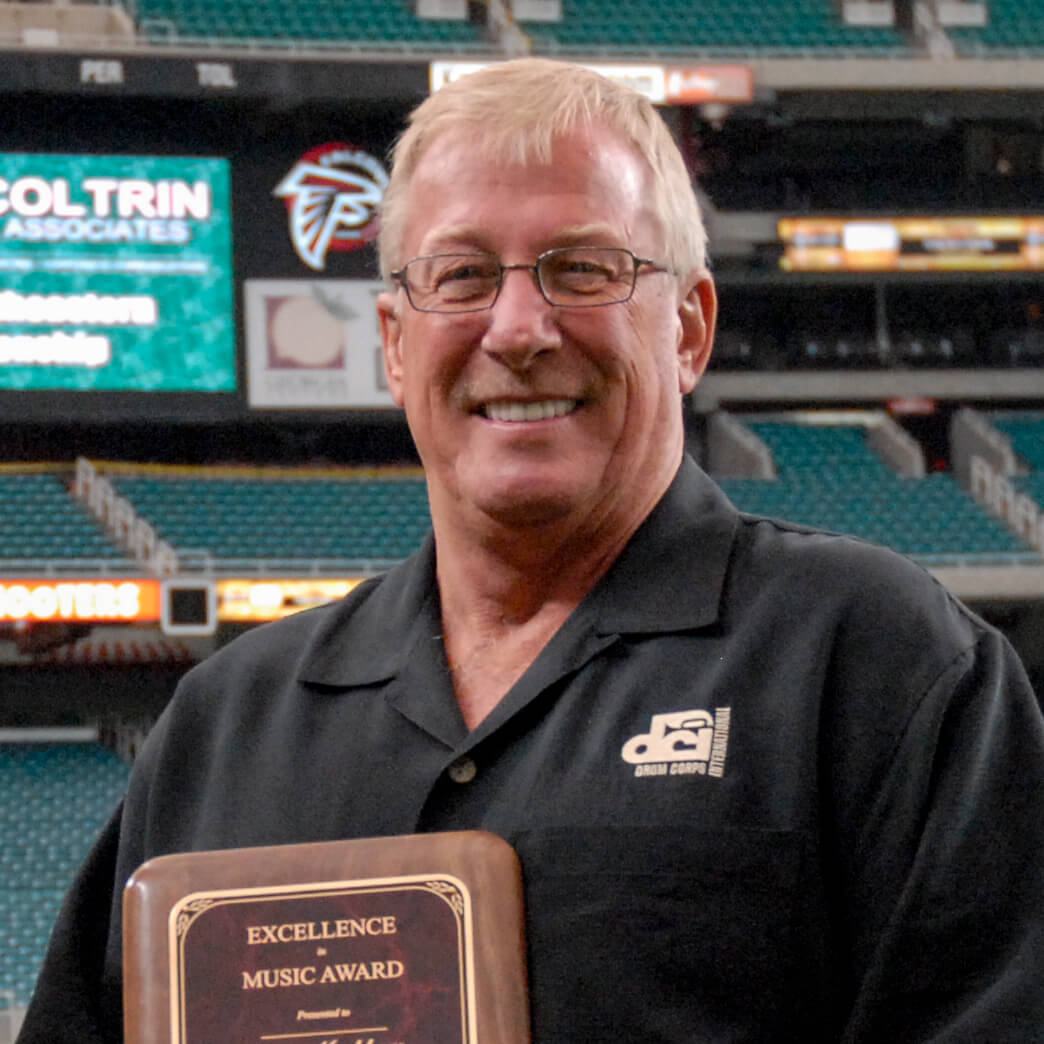 A career music educator, Gary Markham has been an integral part of the Drum Corps International judging community for decades. He’s served as a steadfast voice on the refinement of the DCI adjudication system, continually focused on the education, improvement and enrichment of the art form, for the benefit of judges, designers, educators, performers and fans alike.

The late DCI Hall of Fame member Jim Ott brought Markham to the staff of the Blue Devils in the mid-1970s. After the untimely passing of Ott in 1980, he joined the staff of Spirit of Atlanta as music arranger and program coordinator.

For the next stop in his journey in the Drum Corps International arena, Markham became a DCI judge in the 1980s. Through his extensive background in music education, he quickly became one of the most respected and sought after judges, tapped for his experience on a number of committees and subcommittees. Eventually, Markham was named the education advisor to DCI’s Rules and Systems Task Force.

“It is obvious that the wisdom and expertise he imparts has helped lead our activity to the highest standards in musical production and achievement,” DCI judge administrator John Phillips said. “The complexity of contemporary corps requires a more sophisticated musician to evaluate and elevate the standards and Gary is, without question, one of the finest educators and adjudicators we have on the roster.”

Often referred by colleagues as a “natural organizer” and in a judging system that is created by and continually refined by members of the DCI instructional and design community, Markham has regularly served as a voice that bridges groups of people and different viewpoints to arrive on common ground as Drum Corps International has progressed and evolved over many years.

“His educational forethought and vision were invaluable as we moved to new instruments in 2000 and later amplification and electronics,” 2009 DCI Hall of Fame inductee Jay Bocook said. “In heated discussions, his demeanor was always calming and reassuring. He always made it clear that making great music was our ultimate goal, and it would always be rewarded.”

First and foremost an educator, Markham has been a proponent of and spearheaded continued judge training, again bridging the adjudication and instructional drum corps communities for the mutual benefit of the marching music art form.

“I personally witnessed the change in philosophy and educational training for judges from that of ‘critic’ to one of "educator," said David Starnes, a former DCI judge. “Gary steered this adjudication process into a clearly defined model where judges and staffs worked in collaboration more than ever.”

“There have been many leaders in our activity, but Gary has been a constant beacon of quality and clarity in the development of the current adjudication system,” Phillips said. “He continues to have an impact on DCI by cultivating, mentoring, and nurturing young instructors, judges, and participants who share a similar character of understanding and integrity. Gary's personal philosophy is, ‘Improve the judge and improve the instructor; that will improve our student.’”

Working more than four decades in the field of music education and as the retired supervisor of instrumental music for the Cobb County School District in Marietta, Georgia, Markham has been honored with a number of prestigious awards throughout his career including the Sudler Order of Merit from the John Philip Sousa Foundation (1992), Music For All Hall of Fame (2006), Georgia Music Educators Administrative Leadership Award (2006), DCI and Coltrin & Associates Excellence in Music Education Award (2007), Music Educators’ National Conference Excellence in Marching Music Education (2009), and Conn Selmer Institute Hall of Fame (2015). 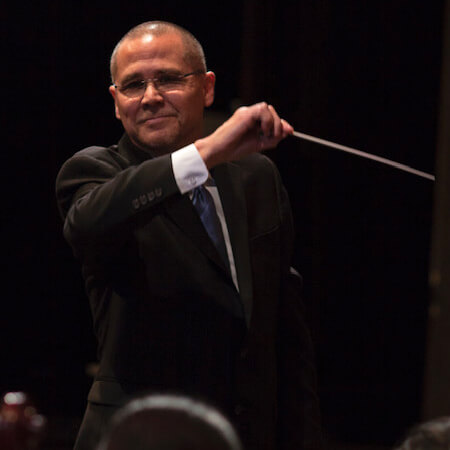 The lush chordal structures and intricate rhythms of some of the most memorable compositions of the Cavaliers throughout the 2000s, were born in large part through the mind and talent of Richard Saucedo.

Starting his drum corps tenure as an adjudicator in the mid-1990s, in 1999 The Cavaliers invited Saucedo to consult on the corps’ design and instructional teams. In 2000, he assumed arranging and composing duties, a position he held with the Midwestern corps through 2008.

Saucedo is perhaps best known and defined for writing the all-original compositions that helped lead The Cavaliers to some of their most successful and memorable productions of all time. Through “Four Corners,” “Frameworks,” “Spin Cycle” and “Machine,” among others, Saucedo defined an era of Drum Corps International show design.

“His ‘outside the box’ thinking and willingness to take any idea and run with it made the creative process invigorating,” said DCI Hall of Fame member Scott Koter who led The Cavaliers’ design staff during Saucedo’s time. “He challenged us artistically and musically and in just a few years the entire activity was transformed by his innovation.”

Noted for his originality and musical brilliance among colleagues, it has been his kindness and humbleness that those same people have credited as paramount to their own successes and in creating the team dynamic among Cavaliers design staff members who changed the trajectory of drum corps show design for a new era.

“With his compositional skills in our arsenal, we all truly felt the sky was the limit,” said DCI Hall of Fame visual designer Michael Gaines. “Richard has always remained humble and is the first one to invite input and innovation. He has shown openness to new approaches, patience with young instructors, mentorship with future leaders, and loyalty to friends and colleagues.”

More than 20 years after audiences experienced those groundbreaking Cavaliers productions, the effects of Saucedo’s musical virtuosity are still being felt today.

“From seamlessly weaving incredible rhythmic ostinatos with imaginative harmonic structures to geometric drill that redefined audio visual coordination, to creating brass sonority through impeccable orchestrations with equal parts refined tonal blend and chest thumping volume, Richard created colors and moments that are still being imitated today,” Blue Devils brass arranger and DCI Hall of Fame member John Meehan said. “For years after those early 2000s Cavaliers corps — and even today — I would find myself referencing those brass arrangements, and how they simultaneously complemented the visual and percussion design as well as stood out on their own without ever feeling forced or contrived.”

During and following his time with The Cavaliers, Saucedo worked as a composer and arranger with the Spirit of Atlanta and Blue Stars, and also returned to his adjudication roots serving as a judge on the DCI Tour and during the DCI World Championships on a number of occasions.

Outside of his Drum Corps International involvement, Saucedo spent 31 years as director of bands at Carmel High School in Indiana. He was named Indiana Bandmasters' Bandmaster of the Year (1998-99) and Indiana Music Educators Association's Outstanding Music Educator (2010) and was inducted into the Music For All Hall of Fame in 2015. He currently serves as a freelance composer and arranger, adjudicator, keynote speaker, clinician and guest conductor around the world.