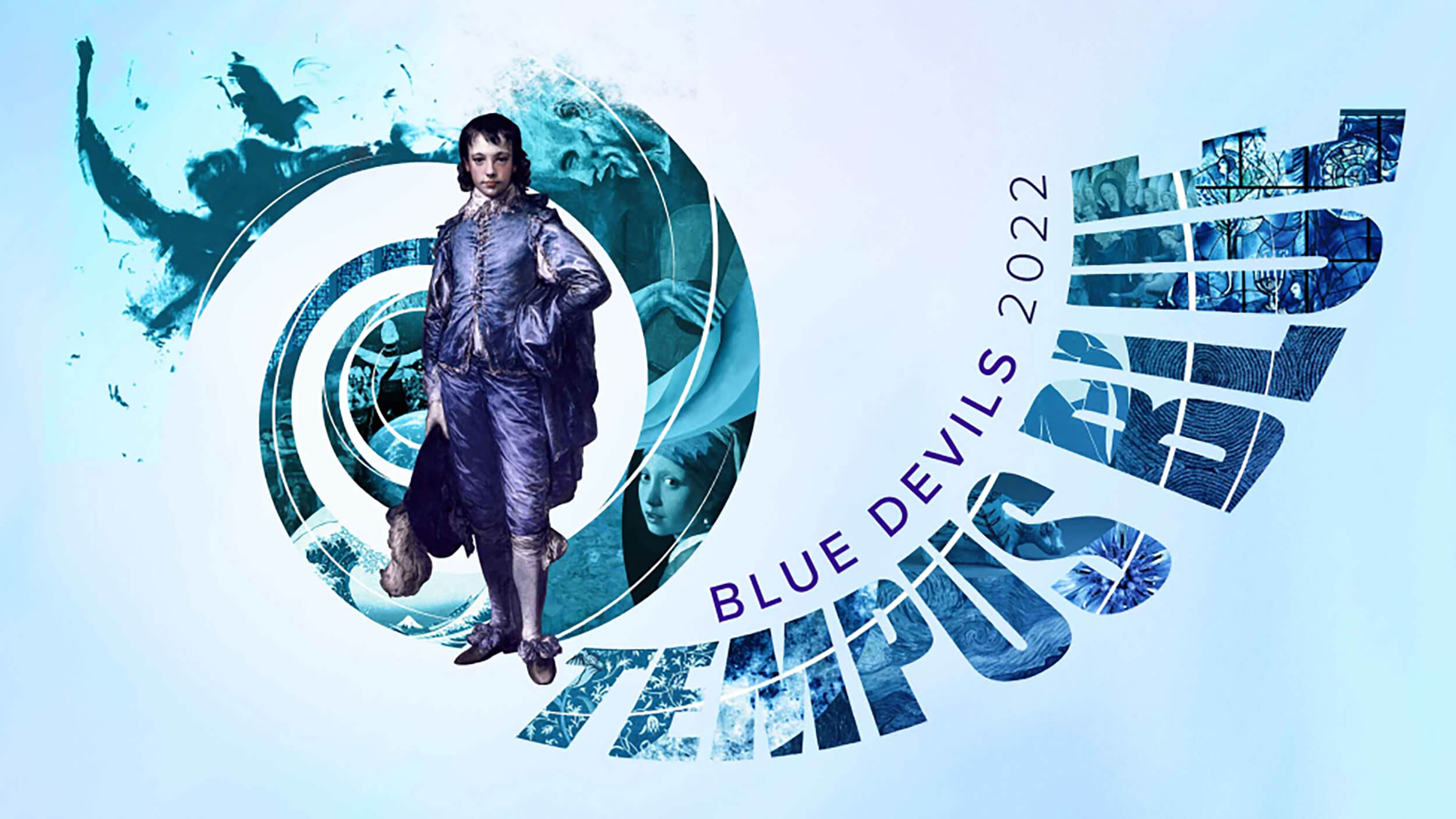 As drum corps’ show reveals continue to appear, the defending DCI World Champions got in on the fun with an announcement of the corps’ 2022 production, “Tempus Blue.”

Here are four things we know so far about what the Concord corps has planned for the upcoming summer:

The Blue Devils have spent much of the offseason promoting their “#SapphireSummer” in 2022, alluding to the corps’ 65th anniversary.

With “Tempus Blue,” the corps plans to tie its anniversary roots — as well as, of course the foundational color of its logo and name — into its on-field programming.

It may seem surprising, but the color blue is a relatively modern invention. The only ancient culture that had a word for it was the Ancient Egyptians, and yet the color BLUE has flourished in a multitude of incarnations reaching far beyond the discovery of Lapis Lazuli. Dancing on the historical timeline of this mysterious and dynamic color, the 2022 Blue Devils celebrate their 65th Anniversary with TEMPUS BLUE. Featuring: LAPIS LAZULI – Original Composition by Dave Glyde DIVINE BLUE – Original Composition by Dave Glyde CARNIVAL OF VENICE (Titian) – Niccolo Paganini MOON RIVER (Blue Flower) – Henry Mancini (Arr. By Jacob Collier) HANDS AND FEET (Picasso) – Michel Camilo SILK SONIC INTRO (Yves Klein) – Bruno Mars TANK! (Yves Klein) – Yoko Kanno HOME OF THE BRAVE (Blue Earth) – Thomas Bergersen Read the full announcement: https://bit.ly/devs2022 #bd2022 #sapphiresummer #bdworld

This won’t be the first time Blue Devils utilize an anniversary theme in a show concept. In 2017’s “Metamorph,” the corps featured an array of diamond imagery for its 60th diamond anniversary.

When Blue Devils bring a popular early-1960s song, “Moon River,” to the football field, they’ll be doing so with a more modern flair.

The corps’ rendition of the song originally composed by Henry Mancini and Johnny Mercer is based on an a cappella rendition, performed by popular musician Jacob Collier.

Collier has a vast YouTube following, and his choral arrangement of “Moon River” has garnered more than four million views on the platform.

According to Blue Devils’ announcement of “Tempus Blue,” the production is inspired by the origin and evolution of the color blue, which was originally discovered by ancient Egyptians in approximately 2500 BC.

Color, however — as the announcement release notes — has been an essential player in art and cultural expression for, as the corps estimated, about 6,500 years.

“Starting with the rise of civilization around 4500 B.C. and continuing to this day, people have found creative ways to produce colors for artistic expression,” Blue Devils’ 2022 show announcement release stated.

“Dancing on the historical timeline of this mysterious and dynamic color, the 2022 Blue Devils celebrate their 65th Anniversary with ‘Tempus Blue,’” the announcement added. “A universal perspective provides a musical palette of influence and style.”

As part of its #SapphireSummer, the Blue Devils organization has plenty of exciting plans for its 65th anniversary.

The centerpiece of the celebration is set for July 9-10, with a full weekend of events around the Bay Area. The weekend will feature a golf tournament and an anniversary gala, before concluding with the 2022 DCI West event at Stanford Stadium in Stanford, California.

Blue Devils’ 2022 summer tour — and its return to the DCI stage for the first time since earning a gold medal in 2019 — is set to kick off Saturday, June 25, in Pasadena, California.