From a Yamato press release: It is with sincere regret that the board of directors of Yamato Drum and Bugle Corps has decided not to field a competitive corps in 2007.    Since the end of the 2006 summer tour, the board has had several discussions with key administrative, instructional and support staff. During last summer's tour, the corps faced several challenges that need to be addressed and that have caused the corps to step back and re-evaluate its operations. 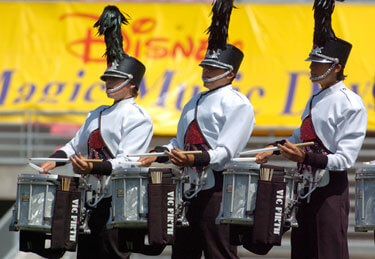 Yamato at the 2006 DCI World Championships in Madison, Wis.
"I know many of you who marched with Yamato these past few years do not want to see the corps go inactive. Some of you may have decided to age out with Yamato next summer or the next, and we are honored. Believe me when I say it wasn't an easy decision to make, but it was a decision that had to made," said Yamato Corps Director Edward Martin. Read more at www.yamatodrumcorps.org.