Until Sara Julian brought this to my attention, I wasn't aware that October is breast cancer awareness month. The important thing to remember is that many forms of cancer are treatable if discovered early. Early detection is the key. Here is Sara Julian's story. As the end of Breast Cancer Awareness Month winds down, it makes me think that every month should be one in which we are aware of the signs of all types of cancer. That is the main reason that I share my story 12 months of the year—particularly in October—to raise awareness and make people realize that young women can get breast cancer, too. I also like to give the gift of hope and survival to people that may have just experienced a cancer diagnosis of their own, like last week's "Fanfare" subject, Michael Pease, who told us in his inspiring article, "Never give up." That was a big lesson I learned through the drum corps activity. 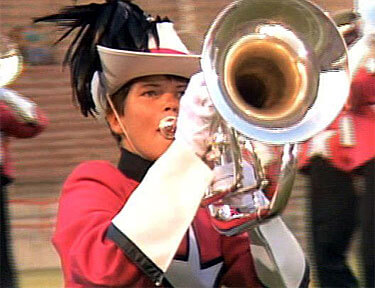 What had initially prompted me to write this article was a post on Drum Corps Planet about Michael Boo's "Where are they now" Fanfare column. It took me back to 1985, where I was—in pink, ironically enough—with the fledgling Star of Indiana. And now here I am a five-and-a-half year breast cancer survivor who just spent the Drum Corps Associates championship weekend marching with three corps—two alumni and one competitive. I learned many lessons that summer of 1985 even if I wasn't aware of them at the time. They were many lessons that served me well when I was faced with my toughest fight ever 16 years later. I've done many things in my life that were hard. Marching as part of Star in 1985 was one of them. People assume that because we were a corporate-sponsored corps that we had it easy that summer, but drum corps is drum corps. We slept on gym floors, traveled cross-country 24 hours at a time, stopping once on a mountaintop to get in a three-hour rehearsal. We left shows after midnight, arriving at out next destination at four in the morning for a few more hours of sleep before getting up to get the full day of rehearsal started early. As a first year corps we had to go on first at every show and back in the days of full retreats every night, there was no hitting the road early to get a start on the next day. I sometimes questioned why I was there and why I was doing this, and was always reminded by that voice in the back of my head, "To march in a top 12 corps at the DCI World Championships." It was a dream of mine since I had watched my first PBS broadcast back in 1978. Star came around right in time for my ageout year, and I jumped at the opportunity. Imagine my dismay when the corps director announced at the first camp that the goal was not to make the top 12 and that if we wanted to march in a top 12 corps that we should go elsewhere. I couldn't afford to go anywhere else, so I decided to stick it out and make the best of it. It was my one shot and I wasn't going to give up. By the final week of the summer I was ready to quit. But the words of my dear friend Jeff Burch that night kept me in, reminding me, "Sara, in five days you'll be marching at DCI Finals. You can't give up now." His words have stayed with me all these years, "You can't give up now." 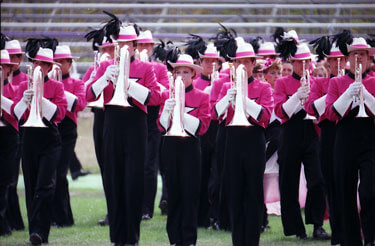 Members of the 1985 Star of Indiana horn line march onto the field.

Sixteen years later, I heard the words, "You have a one centimeter invasive ductal carcinoma in your right breast." I had found the lump by accident the night before I was to fly up to Seattle do a recording session for a CD. A mammogram, ultrasound, and excisional biopsy later, I was faced with the worst nightmare a woman can imagine—breast cancer. That night I went home and cried myself to sleep. I couldn't even bring myself to call my mother to give her the news. But the next day I awoke, and much like every day in drum corps was a new day on a new gym floor in a new city back in the summer of 1985, it was a new day for me too, and I had a steely resolve that I was going to fight this thing and win. I still have the page in my notebook, "I will not die. I will beat breast cancer," written over and over again as soon as I woke up that day. I made it through another surgery, a lumpectomy, losing a third of my breast and five lymph nodes, one that had traces of cancer in it. That put my odds of five-year survival at 60 percent. That was followed by a surgery to put a port in my chest to be used for chemotherapy. Twelve weeks of chemo followed, which made me gain 30 pounds, destroyed my muscle mass and made my hair fall out. In another twist of irony, one of my favorite corps has always been the Blue Devils. One of my chemo treatments was called the "red devil" because it is bright red and so caustic that it causes second degree burns if it leaks out of the vein. Last was a six-week radiation regime after surgery to remove the port. I didn't play my trombone for three months because of the fatigue from treatment. And if anyone ever tells you chemo wasn't that bad, they must have had better drugs than me. While advances in medicine have made it tolerable, it is still an ordeal. And there were times when I just wanted to quit, but I would think back to those days standing in the rain or hot humid heat, both as a drum corps member or as a rugby player, and I would suck it up and grit my teeth and keep on. It's always easy to give up, but as my fortune cookie last night said, "He that can't endure the bad will not live to see the good." Back in 2004, the Star alumni organization was started and marked my return to the drum corps activity. It was hard. Every weekend I had to push myself to not give up. Now days when I'm faced with something like a long hard rehearsal in the hot sun, or a performance in hurricane conditions, I can draw upon my cancer experience to keep me going. I glance down at my yellow Livestrong bracelet and remind myself that it's just drum corps. I've certainly been through worse. I feel blessed and thankful to have my life, but in the back of my mind I know that things can change over night and that you should never take things for granted. Like our horn instructor John Simpson used to tell us back in 1985. It never really hit me until my own life-threatening illness in 2001 just how true that was. I certainly owe a big thank you to my original drum corps family for all those lessons from 1985, even if it took more than 15 years for some of them to hit home, especially the lesson on never giving up.