Paula Hyman will be contributing columns to DCI.org each Wednesday. Here's her ninth installment. This past weekend we had our first camp of 2005, as well as the banquet for the 2004 season. As always, it was great to see everyone again -- especially the age outs. If you keep up with things, you probably know that we have an all-new brass staff this year. Well, they aren't exactly new. These guys were here in 2000 and 2001 and have now returned to us again. I am extremely excited to have them in front of the horn line this summer. I am pumped to have Jana Anderson back with us. Jana marched mellophone here from 1992 to 1998, taught in '99, '00 and '01, and is back for another round in 2005. She marched in the greatest mellophone lines known to man. 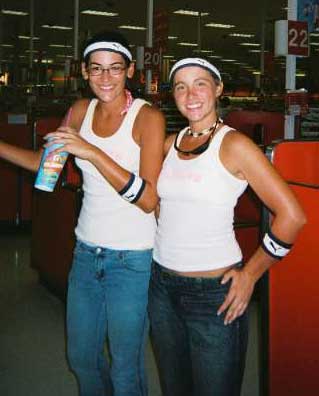 Paula Hyman (left) and parter-in-crime Laura Westmoreland..
We also found out what our show is going to be -- well, sort of. It's a pretty detailed description, so if you would like to know, just read about it on YEA.org. They did a lot better job explaining it than I could. We got a few minutes of music from two pieces in the show. Jay Bocook, of course, is writing another awesome book. Some of this stuff is an original composition by Jay, so he can just go nuts. It was fun to play in the line again. It was a typical camp. We rehearsed until about 12:30 a.m. on Friday and then had snack. There were nachos with cheese and salsa. The cheese tasted like peanut butter, so I just stuck to the salsa. We got up around 8:30 a.m. on Saturday (which would be considered sleeping in if we were on tour). We rehearsed music all morning until lunch, which was around 1:30 p.m. We had grilled cheese and homemade chicken noodle soup -- yes. There wasn't any orange drink at this camp, and if you count the international audition, that makes two camps in a row without orange. I think I'm going to bring some next time for us orange fans to enjoy. We went back to sectionals after lunch and played until around 4:30, when we had marching block. We didn't do too much moving, but there was some. "Stop and gos" were about as far as we got. Regardless, it was still nice to get moving again. After marching we had a talk with Sully. Sully is Marc Sylvester. He started teaching the Cadets in the early 1980s. If it wasn't for him, everyone would still be high mark-timing up and down the 50-yard line. Marc explained the show concept to us and also played some of the music. Things are looking very cool. We're definitely doing some things that no one has done before or even thought about doing -- but that is what we're all about anyway. So stay tuned to yea.org for more info on our show. After we discussed the show, it was time to go back to brass sectionals. We rewarmed as a full horn line in the cafeteria, played a few things and then headed out to small sectionals -- classroom number 22 for the mellos. After a few hours in individual sections, we got back together to play through our pieces before "show and tell." That's where each section of the drum corps plays what they have been working on all weekend for each other. The pit, guard and drums all did some great work and it was a lot of fun to watch them. The brass line – well, everyone loved us. We clearly stole the show. Oh well, nothing new there. On Sunday we had our banquet for the 2004 season. There was a lot of laughing, crying and picture taking going on. It was a great five hours. We gave out gifts to our staff, some members received awards, and we watched our tour video. We also sang "Holy Name" one last time together. That is where the majority of the crying occurred. After we sang, the age outs blew out their candles, signifying that their time marching with the Cadets was up -- but they of course will always be a part of our family. Sad, sad times, but it is all a part of the experience. I am just glad I have two more years before I have to worry about that. Our next camp is from Dec. 17 to Dec. 19, so I am busy preparing for that. I am getting back in the swing of things when it comes to practicing. I stayed up until 2 a.m. yesterday practicing some mello. It's not my problem if the neighbors wake up from my playing. In fact, they should be happy that they get to hear me play for free. Hah, wow I'm just kidding -- I have a silent brass! So I'll be playing one to two times a day each day -- that is my goal anyway. That's all I've got for now. Come back next week to read about -- well, who knows what. It will be awesome, that is all I can tell you. Paula Hyman is a fourth-year member of the Cadets where she is the mellophone section leader. She is 20 years old and currently single. Originally from South Florida, Paula recently made the move to Allentown, Pa., to work for YEA!, the umbrella organization of the Cadets, Crossmen and the U.S. Scholastic Band Association. She ages out in 2006. Past columns by Paula Hyman: A Cadets camp report Macy's Day extravaganza Your not-so-typical day Trick-or-treating at a band show Trick-or-treating at a band show It's a show day! What's a free day? Rest stop or heaven? The Move to Allentown Welcome back to the real world