This week, we'll be paying some editorial attention to drum corps duties -- bus loading, field lining and the like. By Flo Brown During drum corps, ladies are allowed to take advantage of what little chivalry still exists in our modern world -- by claiming ownership over the "easy" crew jobs. 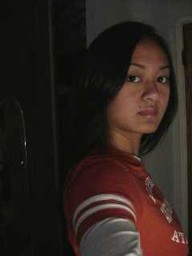 Flo Brown
Each morning on tour I'd wake up slowly and drag myself outside for breakfast. After finding the food truck, I'd look off in the distance and see my boyfriend Steve standing in a field of grass, zombie-like and expressionless. He'd wave halfheartedly and I'd smile sympathetically, grabbing an extra plate of food for him. Steve's crew job was field lining. Field liners had the unfortunate task of waking up two hours before everyone else in the corps to seek out empty fields and spraypaint yard lines on them. When things went wrong, they would often have to spend extra time during lunch to adjust or fix problems. When each section of the corps needed separate fields (as was usually the case), the field liners were in charge of painting three entire football fields. Normally the job of field lining went to an all-male group of brave souls. I've heard of other corps recruiting females for the job, and to those courageous ladies I give my utmost respect. In the Glassmen, however, most girls were given the prized "clean up" jobs. My responsibility was to clean tables after the corps had its nightly snack. I shared this job with 2 lovely ladies named Gail and Fred. As snack clean-up crew, our job was quite possibly the easiest in the corps. We simply picked up trays, wiped down tables, and put utensils away. To break the monotony of cleaning every night, we'd often trade off responsibilities and take days off while the other two cleaned up. Compared to field lining, clean-up crew was heaven -- and I always took the time to thank (insert your choice of deity here) for blessing me with two X-chromosomes. Appreciating the social aspects of drum corps Drum corps pervades the bay area Color guard karma The night I thought my caption head lost his mind Post-season relationships Raindance Confessions of a guard captain