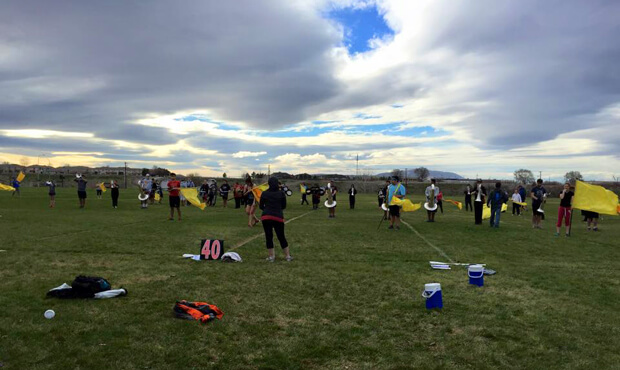 The Columbians headed outdoors during a a rehearsal camp last weekend in Washington.

• More signs winter is over as drum corps head outside

• A full-court press is on for volunteers

Musicians from an Australian high school were special guests of Blue Devils B at the corps' recent rehearsal camp. The school is on a two-week performance tour of California.

Blue Knights used the backdrop of Colorado Nonprofit Week as an opportunity to thank the many volunteers who support the organization's many performing arts programs.

The Blue Stars are recruiting volunteers to assist the corps during its spring training and summer tour.

An exhibition of the Crusaders Senior Corps and other ensembles is scheduled for March 28 in Boston.

Columbians had the opportunity to get outside for rehearsal last weekend and have the pictures to prove it.

Jersey Surf is looking to hire a licensed big rig driver to join its transportation team this summer.

Madison Scouts shared a video snippet of the drum line performing a selection from the corps' 2015 production.

Phantom Regiment's Show of Shows DCI Tour event is up for an award in the corps' hometown of Rockford, Illinois. Voting for the honor, which is open to the public, closes on March 21.

Check out these photos from Pioneer's march down the streets of Chicago during last weekend's South Side Irish St. Patrick's Day Parade.

Troopers posted photos from a recent ensemble rehearsal with the corps' design staff.