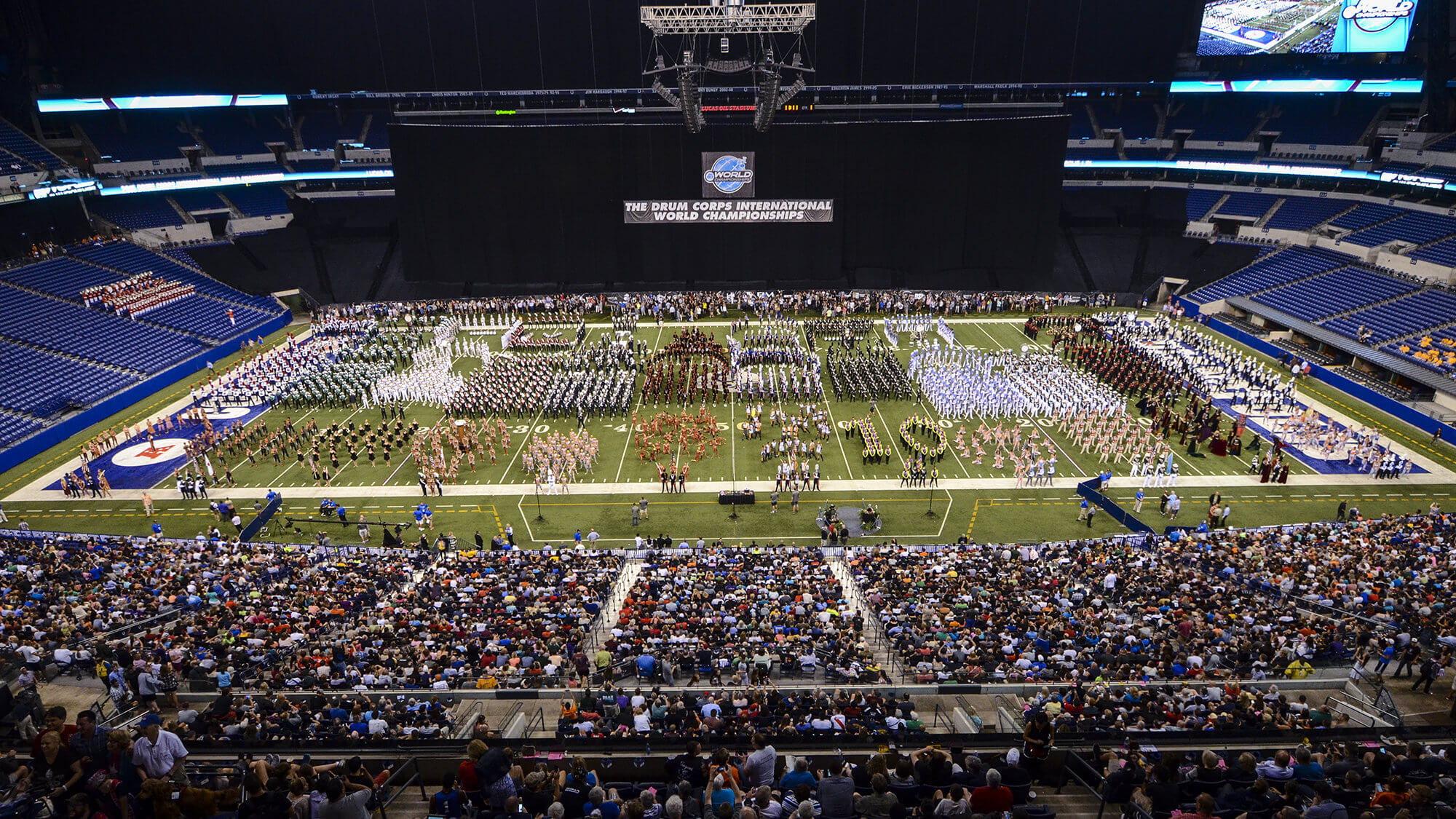 What is Drum Corps International?

Drum Corps International (DCI), formed in 1972, is the non-profit governing, oversight and sanctioning body for North American drum and bugle corps, whose members are under 22 years of age. DCI is headquartered in Indianapolis where it maintains a small full-time executive and administrative staff.

The organization produces and sanctions competitions and oversees the setting and application of the rules of competition. DCI also trains and assigns adjudicators and schedules corps for participation in competitions. The summer tour ends with the Drum Corps International World Championships held each August in Indiana.

Because scholastic music educators view participation in DCI drum corps positively, most World Class groups now process more applicants than positions that are available. This can necessitate an intense, time-consuming off-season audition process. However, most Open Class corps are able to accommodate nearly all students who wish to participate.

What is "Drum Corps?"

The drum corps activity and the Drum Corps International experience is often classified by fans and participants alike simply as "drum corps." There is not much agreement, however, upon a single definition for the term. Each corps has its own interpretation consistent with its own organization, mission and heritage.

Drum Corps International's classification of "drum corps" has evolved over the years, moving from a structured, rules-based definition to an organization- and values-based definition. In addition, the passionate fans and followers of the activity have their own definition that is often personal, deeply held, and reflective of their experience with the drum corps.

Tradition and heritage permeate drum corps. Traditions span through instrumentation, style, attitude, uniforms and music. The degree to which today's corps pay homage to their traditions and heritage is the bellows that stokes the passions that truly separate drum corps from marching bands.

Here's a fairly straightforward definition of "drum corps" from Wikipedia:

Competitive drum corps take part in a summer tour, visiting various cities around the country and participating in competitions. Competitions occur on football fields. Every year, each drum corps prepares a single show, approximately 8–12 minutes in length, and carefully refines this throughout the entire summer tour. This focus on a single show takes advantage of the large amount of time needed to hone and refine a modern drum corps program, with a momentum that continues to build toward the last performance of the season – championships.

What's the Difference Between Drum Corps and Marching Bands?

So what are the specific differences?

First, drum corps use only brass instrumentation – no woodwinds like saxophones, clarinets and flutes.

Second, most marching bands (in the United States) are affiliated with schools and are usually inclusive – everyone who wants to participate is accommodated. Drum corps are independent organizations (typically not part of a scholastic institution) and have a membership limit set at 150.

Depending on the corps, there may be more potential members than performance spaces available. Hence, drum corps, especially the World Class corps, are exclusive, rather than inclusive.

Third, drum corps are self-financing. They rely on fees from participants, Drum Corps International, and traditional development and fundraising activities for their budgets. Scholastic marching bands rely heavily on school budgets (usually public tax revenue) for the bulk of their financial needs.

What is the Drum Corps International Tour?

Formerly called the "Summer Music Games," the DCI Tour is a series of more than 100 drum corps competitions that take place across the country during June, July and August. These competitions are of two varieties – events Drum Corps International produces (Premier Events) and events sanctioned through DCI's national network of Tour Event Partners (Tour Events).

DCI creates the tour schedule, and corps are assigned to events based on availability and travel and logistical issues. Corps travel to the competitions and rehearse and prepare as they make their way between events. The intensive educational and social characteristics of the tour are a key aspect of the DCI experience that differentiates drum corps from scholastic marching band. From the perspective of many students, the tour IS the essence of the drum corps activity.

For Drum Corps International Premier Events, DCI is responsible for all aspects of those tour stops. Corps participating in those shows receive performance and travel fees from DCI. DCI also is responsible for paying all operating costs for events it produces, including stadium rental, security, parking, lighting, etc. For regular Tour Events, the Tour Event Partner pays DCI a fixed sanctioning fee. DCI provides the judges for the event and assigns corps to perform. A substantial portion of this sanctioning fee is used by DCI to compensate the participating corps and to pay the adjudicators.

What's the Relationship Between the Drum Corps and DCI?

Each drum corps is responsible for its own financial, managerial and operational well-being. That said, Drum Corps International has an interest in helping corps remain financially healthy and organizationally sound. Therefore, each year some resources are allocated to evaluate and support corps that may require assistance.

Drum Corps International produces the "Tour." DCI is responsible for producing and sanctioning events and for scheduling the corps during the season. DCI may schedule corps regardless of their membership status.

Not all corps performing in a DCI-produced or -sanctioned event are "member corps." Corps attain membership in Drum Corps International by having a consistent record of performance excellence; external evaluations of their finances, management and operations; and, finally, a vote of the other members of the organization.

When a corps participates in a DCI-produced or -sanctioned event, DCI pays it a performance fee. This fee is relatively equal for all corps, regardless of placement. By participating in DCI events, the corps agrees to allow Drum Corps International to act on its behalf with respect to securing corporate sponsors and marketing audio/visual products and services. A corps is generally compensated for audio/visual sales of its specific performance, while DCI assumes the responsibility of securing the rights needed to record, broadcast and sell performances.