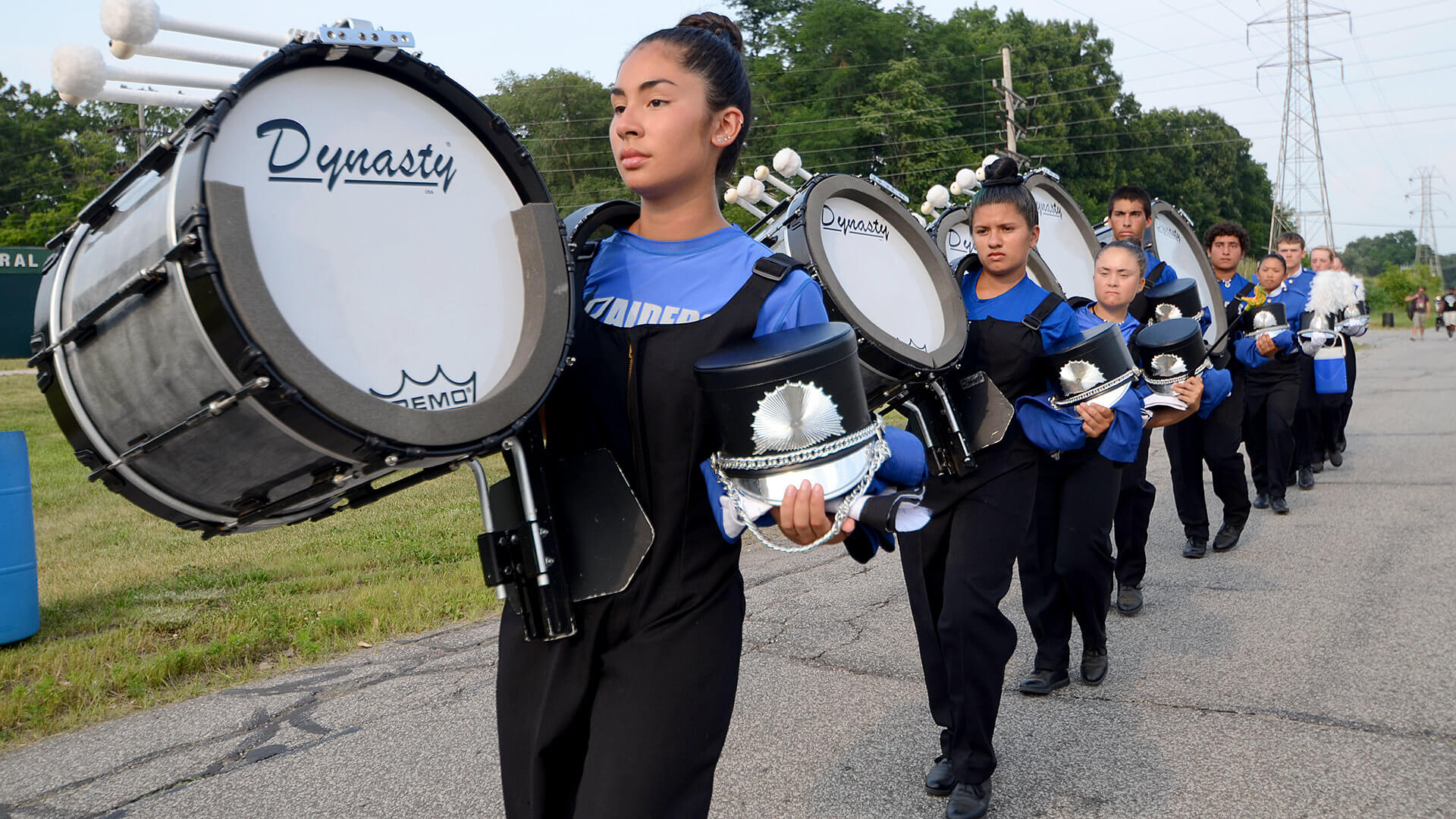 Is My Son/Daughter the Right Age?

Prospective corps members who are under age 22 as of June 1 of the summer season are eligible to compete. Minimum age limits vary, as they are set by the individual corps. Check with the corps you are considering to determine if it is age appropriate for your son or daughter.

DCI's audition information page includes an age-eligibility calculator to help you figure out the cutoff.

Which Level of Participation?

Drum Corps International sanctions and oversees three classes of performance and competition. Each has unique performance and operational characteristics. In selecting the right class for your student, give deep consideration to the time and financial commitment required, family and peer group issues, as well as the student's talent and experience.

The class of corps right for your child depends on the level of commitment they want and CAN make, their talent level and what resources – time and money – they have available. While World Class corps tend to travel consistently from the middle of June until the World Championships in August, many Open Class corps perform only on weekends until the week prior to the Championships. This often makes it possible for Open Class students to also hold jobs during the drum corps season.

The three classes of competition and participation sanctioned by Drum Corps International include:

World Class corps can have up to 150 members. Students in World Class corps are primarily college-age with some high school involvement. Most corps that compete as World Class units follow an intensive tour schedule, traveling more than 10,000 miles over the course of the summer, while performing at more than 35 sanctioned events.

Open Class corps have a minimum of 30 members up to the maximum of 150. Most Open Class units have a membership made up of a mixture of high school and some college-aged students. Open Class corps generally follow an abbreviated tour schedule relative to most World Class corps.

International Class corps are corps from outside North America. Often traveling long distances to perform as part of the annual summer tour, corps in this class are allowed to follow their own country's organizational (usually age limit) guidelines. If they choose to recognize Drum Corps International performance rules, they are allowed to compete in the Open Class.

Once you decide on the appropriate class of competition, you need to determine a specific corps. Each corps is unique in the education, experience and traditions it offers students. Therefore, the right corps choice for your student will require an understanding of the particular corps he/she would like to join. Some corps can be very demanding, and having a solid marching band or drum corps background helps. But experience isn't always necessary, and some organizations may be ideal for beginners.

If the student is committed to participating with a DCI group, it may be advisable to have a fallback option should they not make the roster of their first choice. Approximately 65 percent of students make their chosen corps' roster on their first attempt, while another 25 percent make it after two auditions.

DCI's Project Persona research data shows that the primary factor in a student's corps selection was the educational opportunity offered by that corps. What makes a corps "right" for a student depends on a number of factors including location, corps schedule, cost, age, friends and family, and the student's objectives, such as education.

If your son or daughter needs or wants to work during the summer, then the corps options are likely narrowed to an Open Class corps or one of the World Class corps that offers a limited-touring model.

Other factors that should be considered include where other friends and family members perform, how many events the family will be able to attend and whether or not you (the parents) want to volunteer to help the corps. Talent and ability will also be a key determinant of which corps a student can perform in.

Aside from actually traveling and performing with a corps, nothing helps the student understand the DCI corps experience more than going through the audition process and attending audition camps which typically take place beginning in November through the winter. Even spending just one weekend with a corps will give a student a great educational experience. In addition, corps encourage prospective members to audition so they can receive an assessment of their talent and ability. Regardless of whether your student attends a camp or auditions for a corps, they should talk to current and former members of any corps of which they are considering being a part of.

A complete list of corps websites and other information can be found online at DCI.org.

At various points during this audition process, select students are invited to continue. If a student is "cut," the corps attempts to provide the student with an evaluation and recommendations for improvement. In some cases, it may recommend the student participate in another corps. There are some World Class corps, in particular, the Blue Devils, Santa Clara Vanguard and Colts that offer an Open Class corps as part of their organization for students looking for a different experience.

Some corps offer special educational "What It Takes" (WITS) camps for students who are not quite ready to make that corps' roster. If your student does not make the roster of his/her select corps, and he/she doesn't want to be part of any other DCI drum corps, then a WITS camp may be a suitable next step.