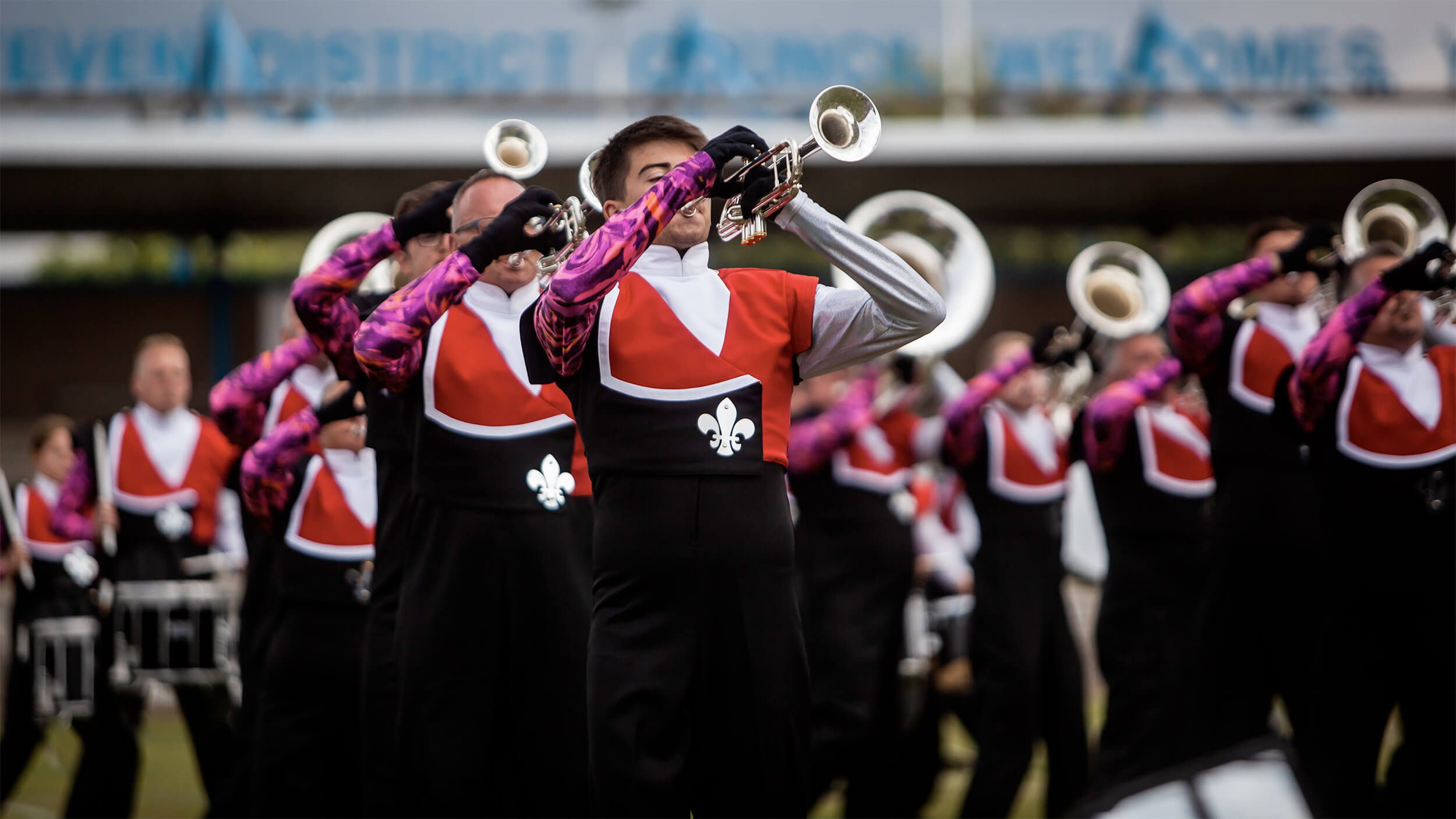 The Kidsgrove Scouts took home their eighth DCUK title since 2007 on Saturday. Photo by: @KidsgroveScouts

The corps topped last year’s title-winning score of 86.800 by a decent margin, scoring 87.350 to take the crown. Kidsgrove Scouts’ 2019 season was its second-straight undefeated run to a DCUK title, and its eighth championship win since 2007, tying an all-time record.

“Absolutely amazing, it’s probably our best performance so far,” Kidsgrove drum major Danny Goodier said during a live broadcast of the DCUK Finals. “We thought we had a lot more energy than [our Prelims performance] which is good. Maybe not as clinical, but I thought we brought the entertainment.”

After taking third a year ago, Beeches powered into the second-place position with a score of 83.250. With Saturday’s result, the Birmingham, England ensemble continued its rise in the British ranks, having finished fifth in 2017 and sixth in 2016.

That said, the corps closely fended off the event’s German visitors, Starriders, who earned the third overall score and the title of International Class Champion. The corps’ score of 83.000 included top marks in percussion. Beeches used a strong advantage in the effect caption to remain ahead of Starriders for the silver medal despite close losses in the music and visual captions.

A noticeable gap separated the top three corps from the next trio, as 10 points stood between Starriders and the fourth-place East Coast Elite (73.000), which narrowly edged fifth-place Revolution (72.500) thanks to a standout advantage in the visual captions. With Starriders representing the International Class, East Coast Elite earned DCUK bronze.

Vikings, an Irish competitor, rounded out the Open Class Finals pool in sixth with a score of 68.500.

Our highest score for the last 40 years of #DCUK history with 61.40 plus being the A Class #Champions, definitely has been #TheGreatestShow #RaiseTheBarBB #BBWeekend

Posted by The Pacemakers Drum and Bugle Corps (Official) on Sunday, September 22, 2019

Thurrock Marching Brass also earned its own gold medal in the Junior Class division, earning a tally of 72.450 to top Concord Allstars’ 70.800.

A handful of the competing corps from Saturday’s event will soon be headed to the Netherlands for 2019’s Drum Corps Europe Championships, set for Saturday, September 28 in Enschede.